91mobiles.com
Home Feature Samsung Galaxy F41 ushers in the era of the Full-On smartphone with...

The Samsung Galaxy F41 has been launched in India as part of the company’s all-new F Series lineup. This smartphone has been designed keeping millennials and Gen Z in mind and gives them everything they need for a Full-On smartphone experience: a striking design and trendy colours, 2-day battery life, a large sAMOLED display, a fantastic camera, and more storage than ever to keep their memories! And while the phone goes big in the specs department, it keeps the price down to an attractive Rs 15499. Its launch – which was celebrated with the Samsung Full On Festival hosted by singers Neha Kakkar and Neeti Mohan, stand-up comic Rahul Dua, and rapper Divine – comes just ahead of the festive season, making it the best gift you can give to someone this Diwali. You can watch the celebrities perform at the #FullOnFestival in the video below:

Let’s take a look at the features that make Samsung Galaxy F41 a Full-On smartphone perfect for Gen Z and millennials. 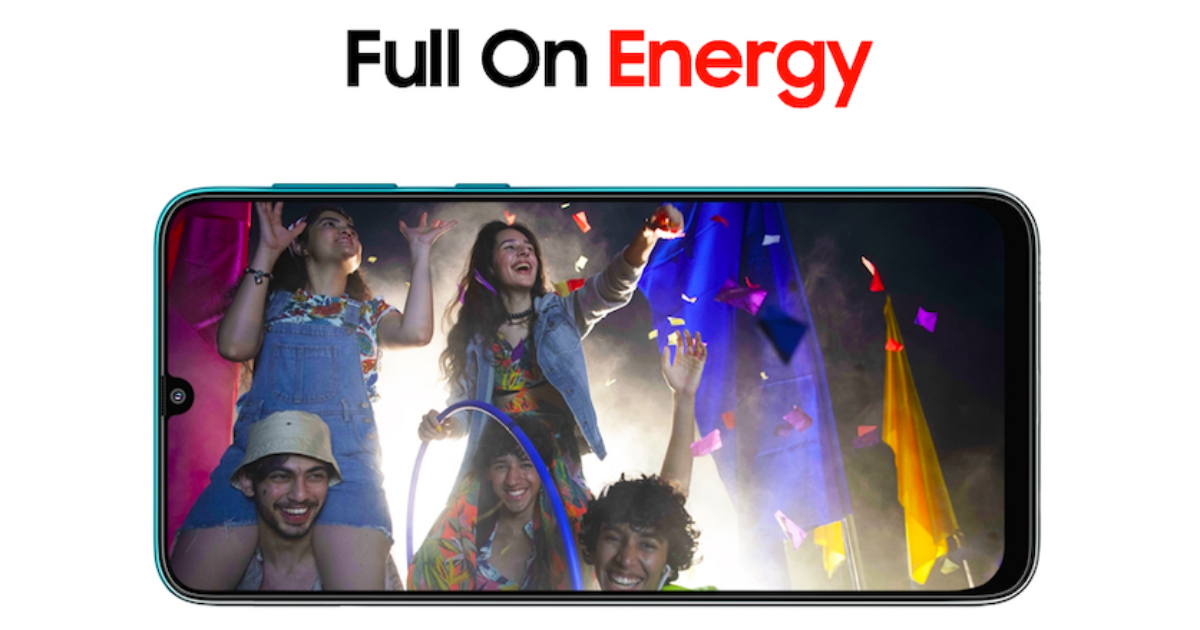 The Galaxy F41 has been equipped with a massive 6,000mAh battery that promises long hours of usage without having to look for a charger. This smartphone will easily last you a full day even if you indulge in long hours of gaming and video streaming! And if you’re moderate with your usage then it can definitely pull off 2-day battery life. Additionally, the battery supports 15W fast charging as well so that you spend less time charging and more time doing what you like! With 15W fast charging, the Galaxy F41 goes from 0 to 100 percent battery in just 160 minutes.

Display more immersive than ever

Samsung has blessed the Galaxy F41 with a 6.4-inch Super AMOLED display, which offers an impressive peak brightness of 420 nits. This panel promises immersive visuals thanks to the excellent contrast that is made possible by its sAMOLED panel. To give you a better perspective, the display on the Galaxy F41 comes with a contrast ratio of 78960:1, which is nothing short of incredible. Apart from this, the Super AMOLED panel on the handset can show up to 110 percent of the NTSC colour gamut. It also features the Infinity-U design that maximises the screen real estate by pushing the selfie camera in a tiny U-shaped notch and making the bezels around the screen narrower than ever.

All this combined means that your display experience is full on lit – more immersive than ever and the colours are more vibrant and punchier, and perfect for binging on your favourite streaming shows and playing games!

Gen Z and millennials love clicking photos and shooting videos wherever they go, whether it’s on vacations or at home. That’s why the Samsung Galaxy F41 comes with a fantastic 64MP triple camera setup on the back. The setup is headlined by a 64MP main sensor that can capture amazing high-resolution shots under all lighting conditions! It is accompanied by an 8MP ultra-wide-angle lens that can capture everything the eye can see and gives an expansive view of the scene. And lastly, there’s a 5MP depth sensor to capture portrait shots thanks to the famed Live Focus feature that Samsung phones pride themselves on. Live Focus enables you to view the portrait effects right in the viewfinder, even before you capture the photograph. With sensors as varied as these, it’s no wonder the Samsung Galaxy F41 is the perfect camera-phone for all your needs!

On the front, the Samsung Galaxy F41 features a spectacular 32MP selfie camera, which helps you ace your social media game. You get features including Live Focus and Smart Beauty that let you click beautiful portrait selfies as well as retouch them to get the best shots in every lighting condition and scenario. 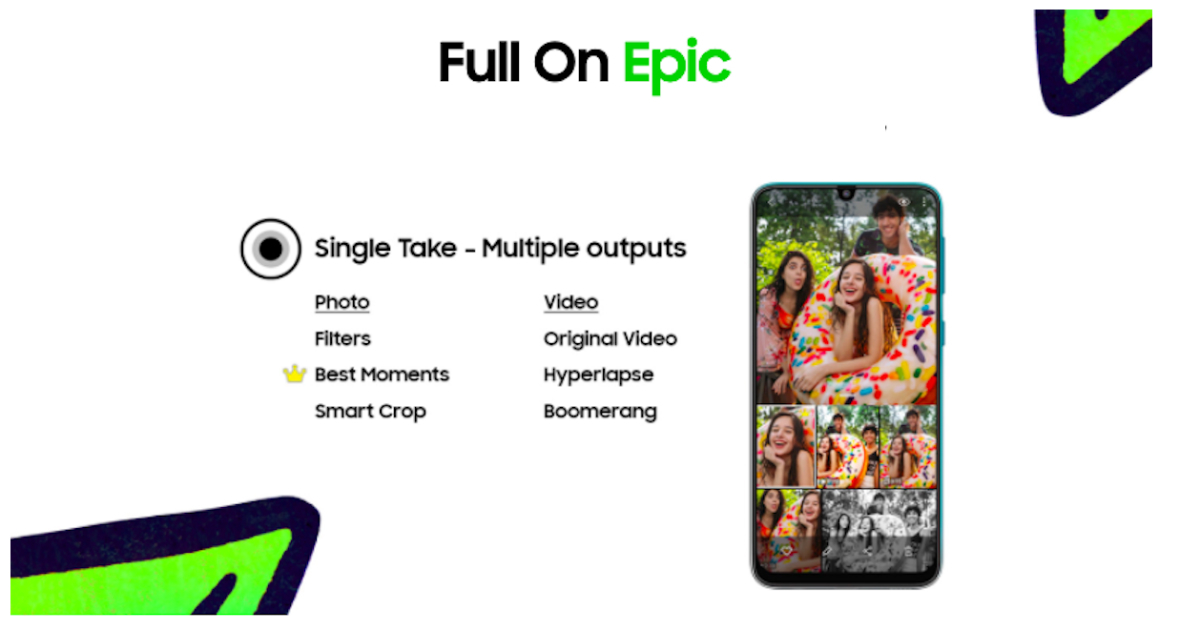 A feature coming straight down from high-end Samsung phones, Single Take is the most versatile way of capturing a shot. With this feature, you can capture the same scene in as many as 10 different formats. This means just a single click of the shutter will give you 7 photographs and 3 videos. Single Take on the Galaxy F41 makes use of its triple cameras to snap images with different lenses and different crops, while also capturing regular, time-lapse and Boomerang videos of 3 to 10 seconds. You can go back to your album any time to sift through all of them, keep the ones you like and delete the rest! This translates to a photography experience never seen before in the mid-range segment. 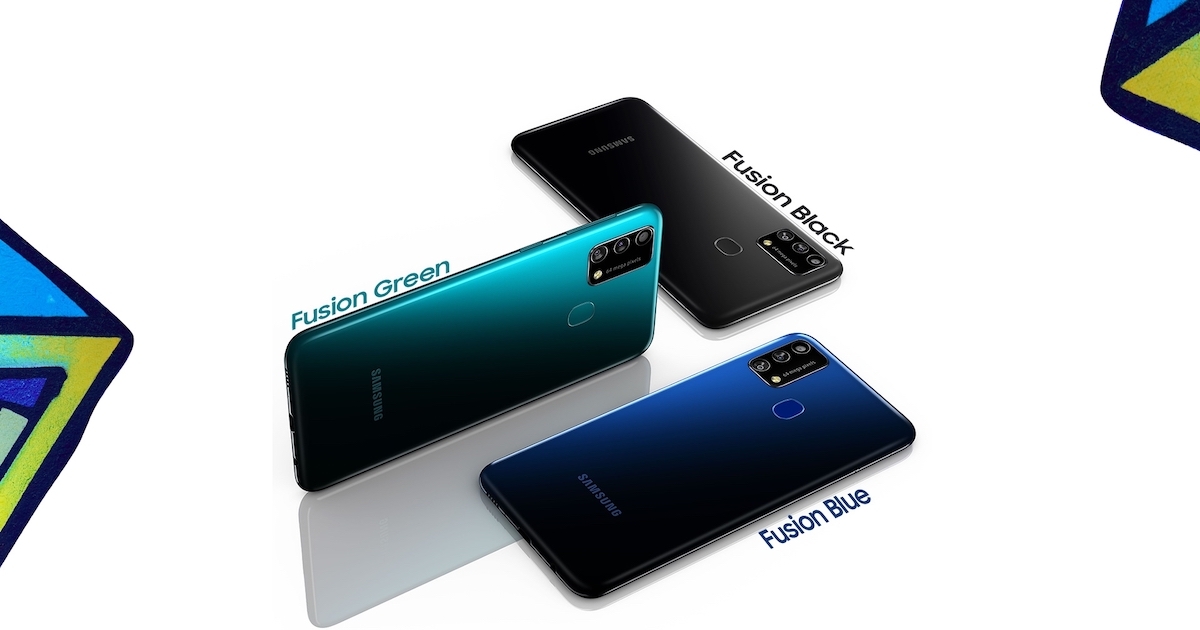 Samsung Galaxy F41 features a premium design that complements your swag and will turn heads wherever you go. The smartphone has a premium gradient design that’s accompanied by a futuristic holographic effect. The entire rear surface of this phone is gorgeous to the eye, just like its front surface and Infinity-U display. The three beautiful colours – Fusion Green, Fusion Blue, and Fusion Black – will match your style every single time!

Ample storage for all your needs

For a generation that loves to stream TV shows on the go and shoot photos and videos all the time, having ample storage is a prerequisite. It’s no surprise that Samsung Galaxy F41 comes out with flying colours in this department as well. The phone comes with a minimum of 64GB in-built storage, and you can up the ante with a massive 128GB internal storage too! That should be enough for almost anything you do on your phone! But if that’s not enough, you can take advantage of the phone’s microSD card slot, which supports additional storage of as much as 512GB! You’ll never run out of storage with this device.

With features like these, it’s hard not to be excited about the Samsung Galaxy F41. Well you won’t have to wait too long to get your hands on this smartphone – the Galaxy F41 will go on sale starting October 16th via Flipkart! As for the price, you can get the handset at a starting price of just Rs 16999 for the 6GB + 64GB variant, while the 6GB + 128GB storage option will cost you Rs 17999. These specifications, combined with a class-leading Samsung Exynos 9611 processor mean that you get blazing fast performance and multitasking at an extremely attractive price point. And while the price is astounding, that’s not all that Samsung has up its sleeve.

Customers buying the smartphone during the Flipkart Big Billion Days sale (i.e. October 16th to 21st) will get a Rs 1500 discount as part of an introductory offer. This brings down the prices of the two variants to just Rs 15499 and Rs 16999, respectively! There will also be an additional 10 percent discount for SBI debit and credit card holders during the sale, meaning more savings for you. With amazing features and a crazy price, buying the Samsung Galaxy F41 is a no-brainer this Diwali. So head to Flipkart or Samsung on October 16th to get the Full-On smartphone!