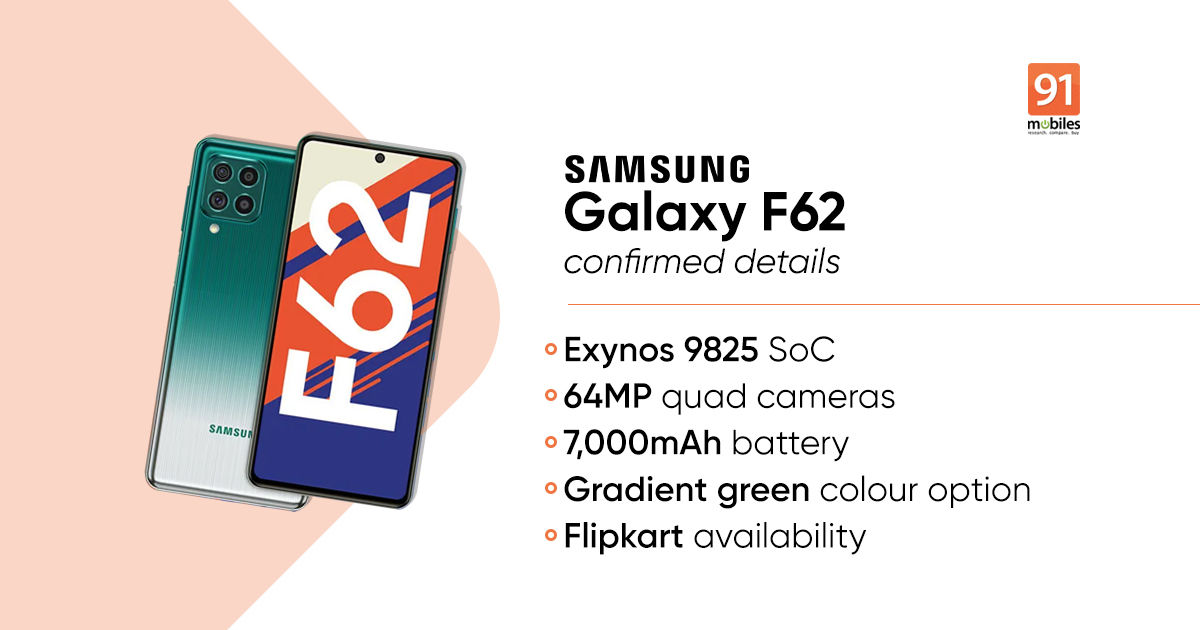 Samsung Galaxy F62 India launch is scheduled for February 15th at 12 PM IST. Thanks to Flipkart’s dedicated microsite, the handset is already confirmed to come with quad-cameras, a gradient green colour option, the Exynos 9825 SoC, a centre-positioned punch-hole cutout for the selfie camera, and a side-mounted fingerprint sensor for security. The South Korean giant is promoting the handset with the #FullOnSpeedy hashtag. Now, the e-commerce listing is updated to reveal that the Samsung Galaxy F62 specs will include a massive 7,000mAh battery. This will be the second phone from the brand after the Galaxy M51 to pack this battery capacity.

Also read: Galaxy A32 5G launched as the cheapest 5G phone from Samsung yet

According to earlier leaked specifications, the Samsung Galaxy F62 is said to sport a 6.7-inch Super AMOLED display with slim bezels and FHD+ resolution. The Exynos 9825 SoC could be paired with at least 6GB RAM and 128GB internal storage that should be further expandable via a microSD card. As for the optics, the Galaxy F62 is confirmed to feature a quad-camera array with a 64MP primary sensor, which is probably accompanied by an ultra-wide-angle lens, a depth sensor and a macro lens.

The 7,000mAh battery could be accompanied by a 25W fast-charger. Connectivity features could include 4G LTE, dual-band Wi-Fi, Bluetooth, GPS, and USB Type-C port for charging and data transfers. It will have a side-mounted fingerprint sensor for security and is likely to boot Android 11 OS with OneUI 3.0 custom skin on top. Besides the green colour, the Samsung Galaxy F62 is said to come in a Blue colour option as well. That’s pretty much everything we so far know about the Galaxy F62 but with the launch just a few days away, we don’t have to wait for much longer to know more.