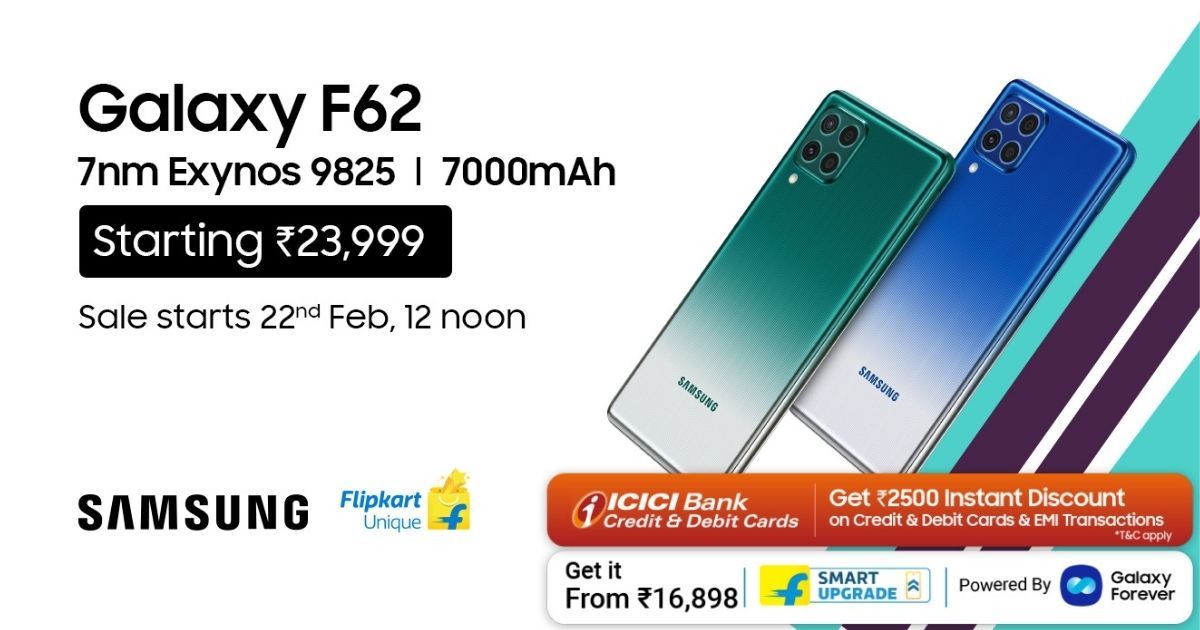 The Samsung Galaxy F62 has finally broken cover and emerged as the smartphone to beat in the sub-Rs 25,000 price segment. Not only does it ship with the flagship 7nm Exynos 9825 processor at its heart, but it also features a 7,000mAh battery, which makes it the first smartphone on Flipkart to be sold with such a capacious cell. Let us give you a full lowdown on what this new Samsung device has in store for you.

As prefaced previously, the Samsung Galaxy F62 ships with the company’s flagship 7nm Exynos 9825 processor, which gives the device a massive competitive edge in its price segment. For one, the SoC holds the record for being the industry’s first mobile processor to be built with 7nm EUV processing technology, thereby offering not just excellent performance but efficient battery usage as well. What’s more, the chipset’s assembly comprises a 2.7GHz octa-core CPU and a Mali-G76 MP12 GPU. It should come as no surprise then that it has returned highly impressive benchmark scores, beating its competition by impressive margins. 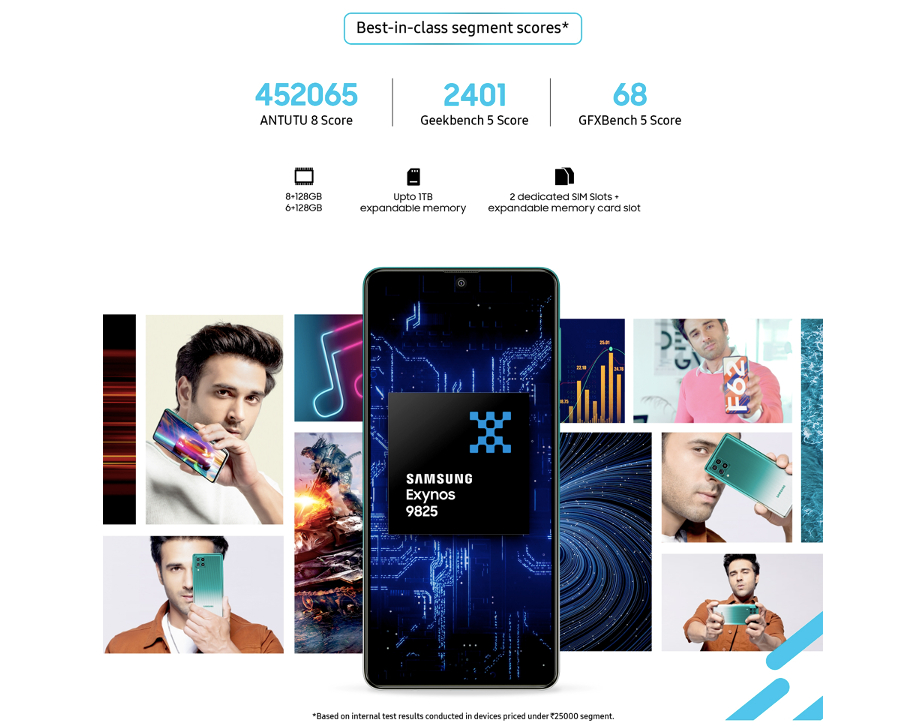 In fact, one look at its AnTuTu 8 score of 4,52,065 points will make you wonder why the company is positioning it amongst mid-range phones, rather than flagships – it’s that good. Similarly, in Geekbench 5, the Exynos 9825 scores 770 and 2401 points in the single-core and multi-core tests, respectively. To give you a better picture, the scores outputted by the processor in GeekBench 5 lend it a 32 percent better single-core performance and a 36 percent better multi-core performance, compared to devices running Qualcomm’s Snapdragon 765G SoC. On GFXBench’s Manhattan test too, the flagship 7nm Exynos 9825 processor manages to score 68 points, giving it a 31 percent better standing compared to devices powered by the Qualcomm chipset. 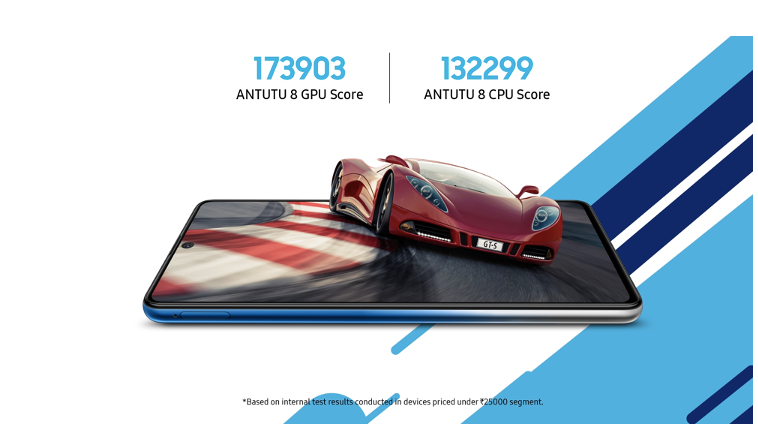 Suffice it to say, the Samsung Galaxy F62 will breeze through your daily tasks but gamers can also look to the device as a worthy companion. To that note, the processor nets extremely high AnTuTu 8 CPU and GPU scores of 1,32,299 and 1,73,903, respectively. Compared to Qualcomm’s Snapdragon 765G chipset, the flagship 7nm Exynos 9825 processor gives 28 percent better CPU performance and a whopping 85 percent better GPU performance in the aforementioned tests. It cannot be stressed enough – the Samsung Galaxy F62 looks all set to rule the hearts of gamers.

Those looking for smartphones that can last a whole day are in for a treat as the Samsung Galaxy F62 can get through not one, not two, but even three days straight with moderate usage. Thanks in no small part to the smartphone’s mammoth 7,000mAh cell, the Samsung Galaxy F62 will rarely ever give you battery anxiety and will ensure that you get through your workday without having to plug the phone in. And, should you run out of juice, you can quickly get it back to 100 percent as the smartphone ships with a 25W charger in the box. What’s more, the phone supports Reverse Charging as well, for when you want to top-up other devices quickly.

The phone also ships with a 6.7-inch FHD+ Super AMOLED Plus Infinity-O display that’s spread across the entirety of the front surface, offering a screen-to-body ratio of 86.7 percent, translating into high levels of immersion. Being an sAMOLED panel, this display provides a superb contrast ratio of 1000000:1, and also covers up to 110 percent of the NTSC colour gamut. Watching movies and playing games will, no doubt, be an incredibly satisfying experience on the Galaxy F62. A speedy side-mounted fingerprint reader and a dedicated microSD card slot are the other highlights of this phone’s design.

The Samsung Galaxy F62 is just as beautiful on the outside, as powerful as it is on the inside and towards the back, the smartphone boasts a striking rear surface with a unique Laser Gradient design that has several vertical lines running along with it. A fringe benefit of the same is that the etching on the back also helps you get a better grip on the handset. Coupled with the vibrant shades of Laser Green, Laser Blue and Laser Grey, the Samsung Galaxy F62 will make a statement every time you take it out of your pocket. 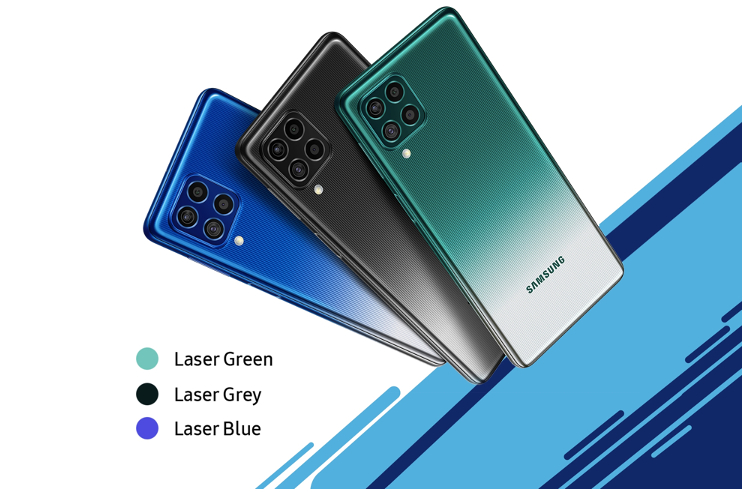 Headlined by a 64MP main sensor that comes in the form of the highly capable and much acclaimed Sony IMX 682, the Samsung Galaxy F62 promises to offer a truly magnificent photography experience. A 12MP ultra-wide camera, a 5MP depth sensor, and a 5MP micro camera accompany the main shooter, and together, they enable the phone to capture a particular scene in a variety of stunning ways. And if you’re confused with how to best approach a particular scene, then you can make use of the phone’s Single Take feature which delivers 14 different outcomes of a composition in the form of photos and videos with the tap of a button. You can decide later whether you want to keep all of them or delete a few too.

Selfie enthusiasts will also be glad to know that the Samsung Galaxy F62 comes equipped with a 32MP front camera which offers enough pixels to capture even the most minute details. What’s more, the selfie camera can also record 4K videos, which will surely appease all the vloggers in the audience.

Defense-grade security with Knox and much more 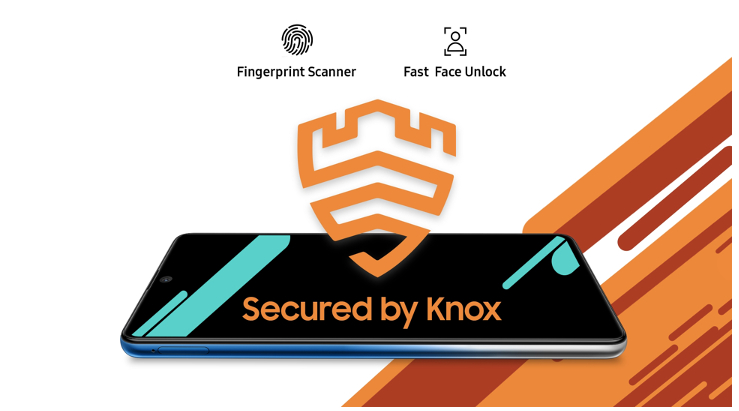 Samsung Galaxy F62 comes loaded with the Samsung Knox security suite, which is a first for the Galaxy F series. With its comprehensive list of features, Knox puts its users’ minds at ease about their device’s security. The phone runs OneUI 3.1 on top of Android 11. This latest platform allows the phone to offer a fast, responsive, and intuitive user experience. The icing on the cake is that the Samsung Galaxy F62’s software suite also comes with support for NFC-based Samsung Pay, giving users a fast and secure way to make payments when they’re out and about.

It’s hard to fathom that the 6GB RAM variant of the Samsung Galaxy F62 carries an MRP of just Rs 23999, especially when you factor in the smartphone’s power-packed internals and its high-end feature. The phone is all set to go live on Flipkart, Samsung Online Store, Reliance Digital Stores, My Jio Stores, and select retail outlets on February 22 from 12 noon onwards. Not only this, there is also a jaw-dropping offer with an instant cashback offer of Rs 2500 with ICICI bank cards and EMI.

Here is a hack to own the brand-new Samsung Galaxy F62 by paying just Rs 14398. Flipkart’s Smart Upgrade Program powered by Galaxy Forever lets you grab it at just 70 percent of its actual price, i.e., Rs 16898. Combined with the Rs 2500 instant cashback on ICICI bank cards and EMI, the value goes down further to Rs 14398.

After one year, you can return it and upgrade to a new Samsung Galaxy handset or simply pay the remaining 30 percent to continue using the Samsung Galaxy F62. So, what are you waiting for? Head on over to Samsung.com and Flipkart to get notified as and when the phone goes on sale!