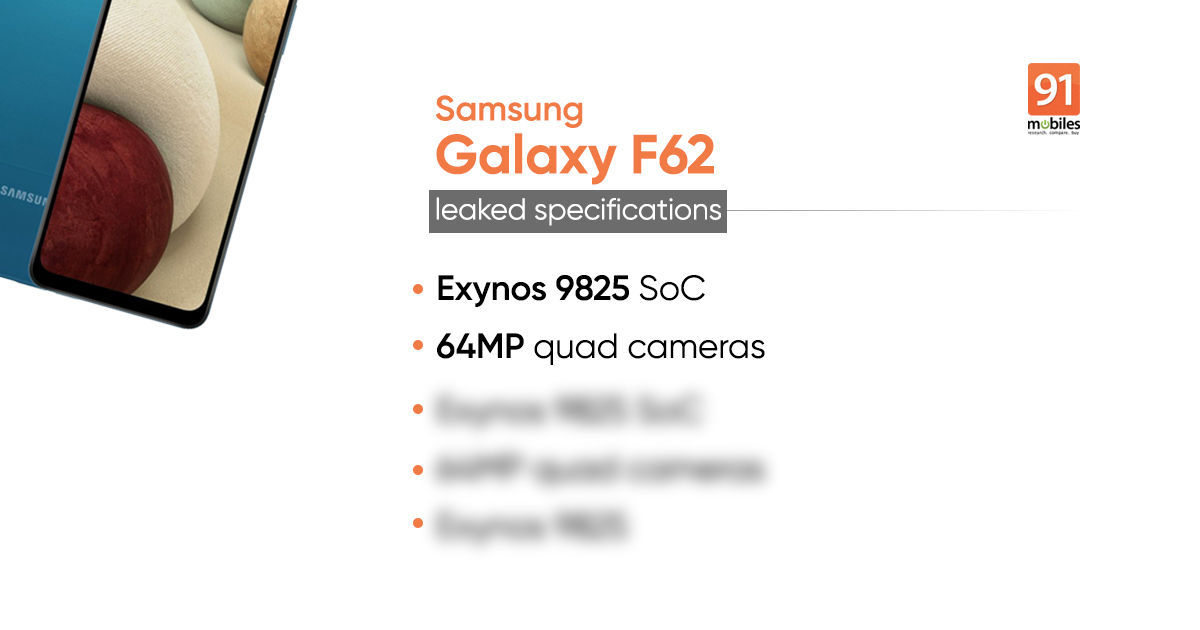 Samsung Galaxy F62 release date in India is getting closer as the smartphone has been in production since early December and the support page went live on the Samsung India website recently as well. Earlier this, Samsung Galaxy F62 price in India was tipped and it looks like the phone will launch in the country under Rs 25,000. Now, a brand new report reveals key Samsung Galaxy F62 specifications, including the battery and display details. MySmartPrice reports based on a tip by Ishan Agarwal that the upcoming smartphone will sport a 7,000mAh battery, 6.7-inch sAMOLED display, and a 64MP primary camera.

The Samsung Galaxy F62 specifications tipped by Agarwal are more or less in line with what has been said about the rumoured Samsung Galaxy M62. Both the smartphones are expected to arrive with a massive 7,000mAh battery and a large display. The Galaxy F62 with model number SM-E625f will sport a 6.7-inch sAMOLED display, as per the report. There is no information on the fast-charging support yet, but we expect the device to offer at least a 25W fast charging solution in order to quickly charge a large battery.

The smartphone is expected to come in Green and Blue colour options. As per the report, the phone will come with 6GB RAM and 128GB internal storage. A previous Geekbench listing reveals the smartphone will come with the Exynos 9825 chipset. As for the cameras, the Samsung Galaxy F62 is tipped to come with a 64MP quad-camera system, though details about the other three sensors are slim at the moment. The handset is also expected to feature a 32MP front-facing camera and Android 11-based One UI 3.1.

Samsung Galaxy F62 is widely expected to be the next smartphone to launch in the Galaxy F series. To recall, the company launched the Galaxy F41 last year and it was exclusively sold on Flipkart. We expect the Galaxy F62 to also be exclusive to the e-commerce platform. The Samsung Galaxy F62 price in India is tipped to be under Rs 25,000, but we will have to wait for the launch event to find out the official prices.