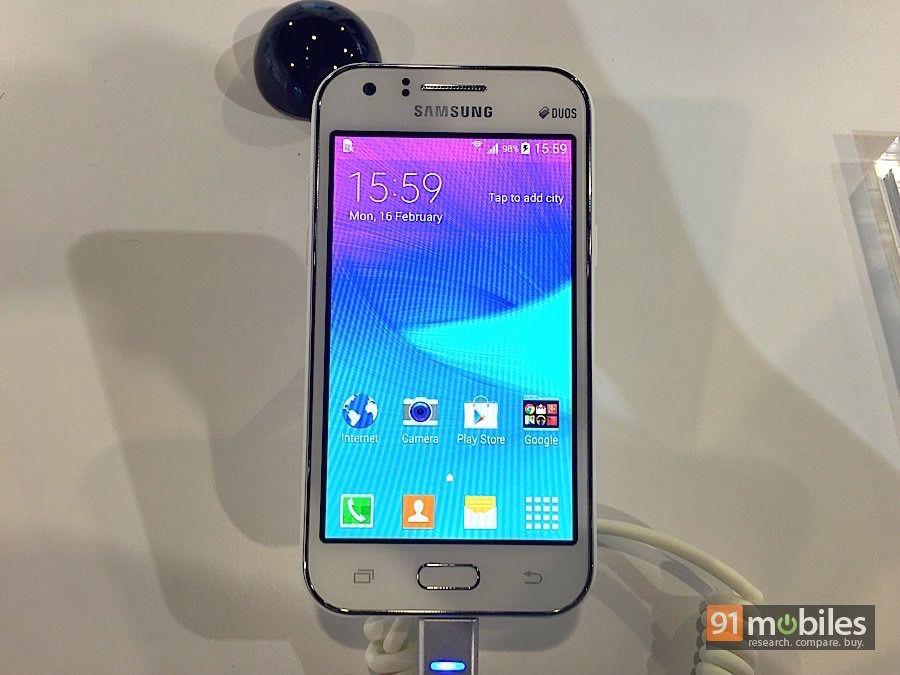 At the recent Samsung Forum held in Bangkok, the company unveiled its new flagship smartphone, the Galaxy A7 (first impressions), along with three new 4G smartphones for the Indian market. The Samsung Galaxy Grand Prime and Galaxy Core Prime, which have been around in the market for a while now got an upgrade with support for India’s LTE bands, as did the newly-launched Galaxy J1, which went on sale via Amazon recently for Rs 7,190. At the forum, we got a chance to go hands on with the Galaxy J1 4G, which at its price of Rs 9,900, will be Samsung’s most affordable 4G smartphone yet. Read on for our first impressions.

In terms of design, the Galaxy J1 4G looks like staple Samsung fare, with its plasticky body, chrome detailing and rounded edges. Thanks to its 4.3-inch display, it’s very compact, fitting easily in one hand. The display features a mediocre resolution of 480 x 800 pixels, and we can’t understand why Samsung refuses to bump up the specs in this department, considering most similarly priced alternatives offer 720p resolution. The only saving grace is that the display has ample brightness levels, and colours are vibrant. 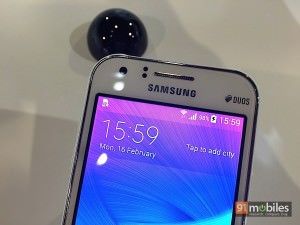 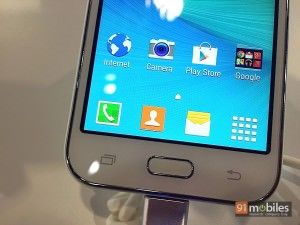 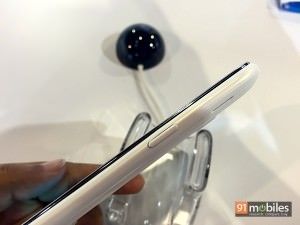 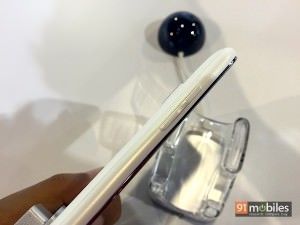 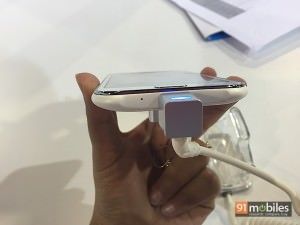 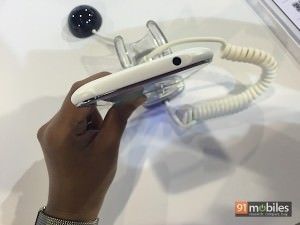 Above the screen you’ll find the primary 2MP camera, sensors, earpiece and Samsung branding. The fascia below the display is home to the physical home button and two capacitive Android buttons. The top edge holds the 3.5mm audio jack, while the bottom houses the micro-USB port. The right spine is home to the power button, while the volume rocker is located on the left. 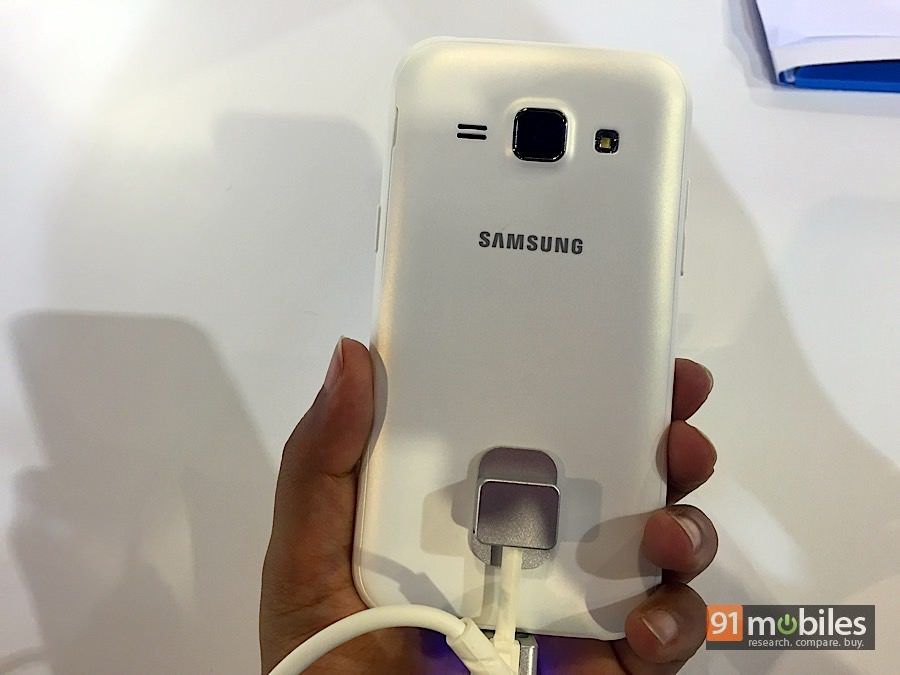 The plastic rear panel features a smooth matte finish. Right on top you’ll find the primary 5MP camera, flanked by the loudspeaker on the left and an LED flash on the right. The back cover can be pried open, revealing the removable 1,850mAh battery, a micro-SIM card slot and a hybrid SIM card slot which can also hold a microSD card if required. 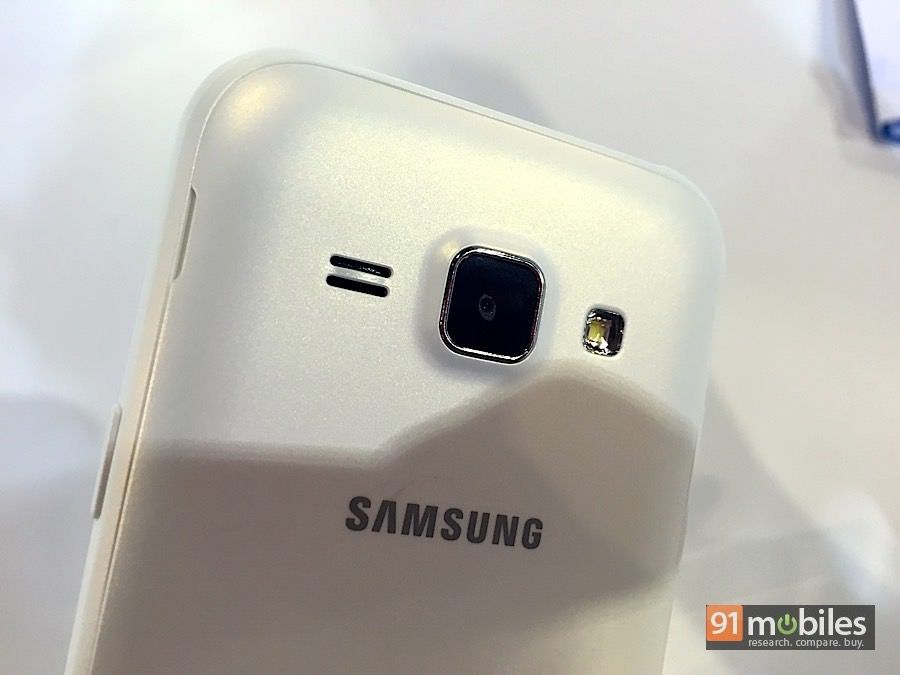 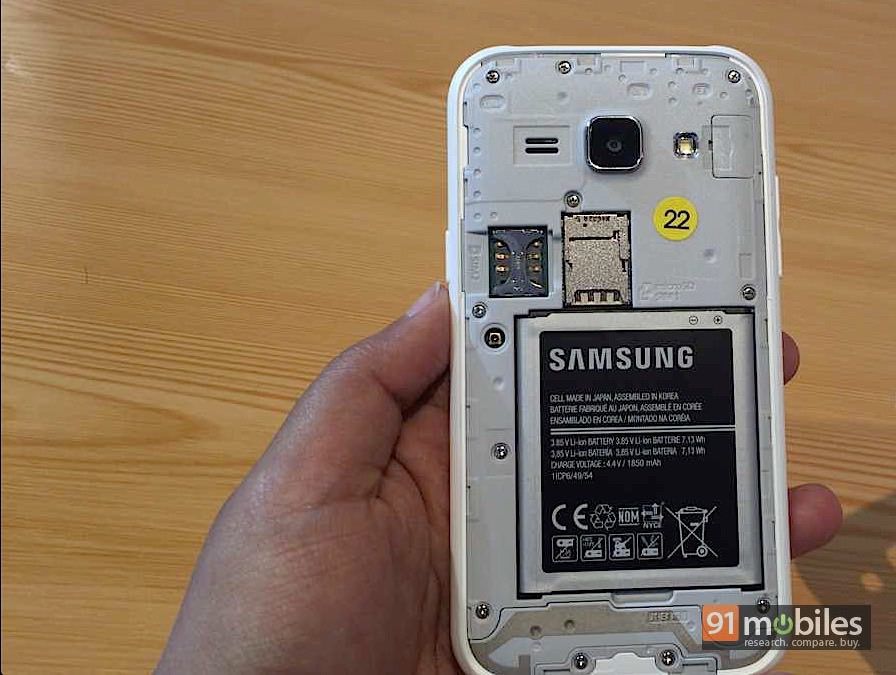 The front camera on the Galaxy J1 4G has some selfie-oriented features, such as a palm selfie (camera takes a photo when it detects your palm) and a beauty mode. Despite the low resolution, the image quality seemed quite decent on both the cameras. Powering the device is a quad-core processor clocked at 1.2GHz, mated to 768MB of RAM (up from 512MB on the 3G variant). There’s a paltry 4GB of storage, out of which around 2GB was user available on the display unit we used. The microSD card slot supports expansion by an additional 128GB. 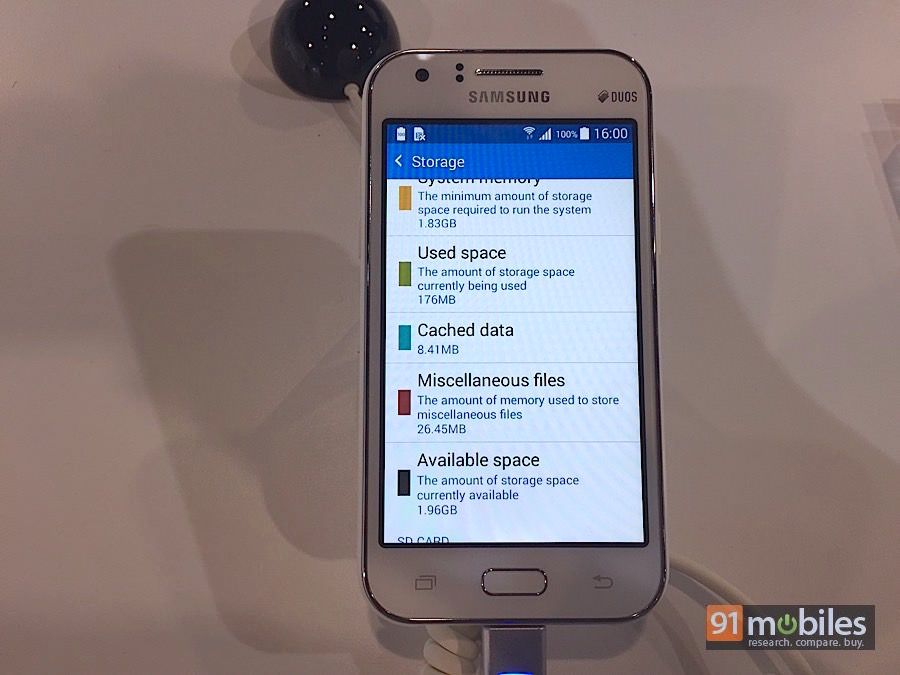 Handling software on the Galaxy J1 4G is Android 4.4.4 KitKat masked by Samsung’s TouchWiz UI. Since this is a budget handset, not all the usual TouchWiz tweaks are available, but we did notice the presence of the Ultra Power Saving Mode which switches the display to grayscale and limits the functionality to extend battery life. In terms of connectivity, the Galaxy J1 4G offers Wi-Fi, Bluetooth 4.0 and GPS for connectivity. Its support for 4G networks include both LTE Band 40 (2,300MHz) and LTE Band 3 (1,800MHz). 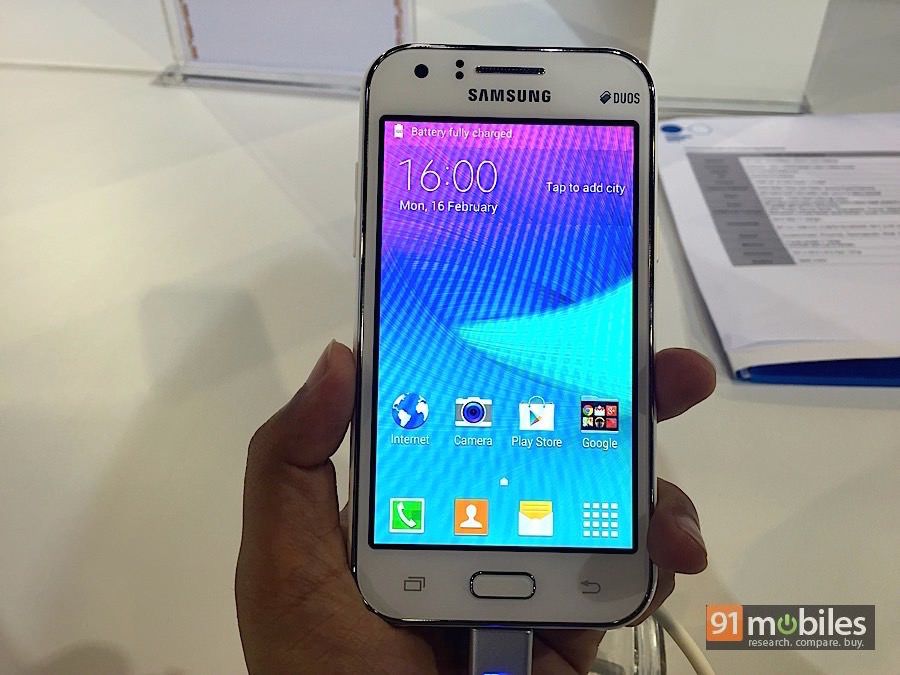 While we appreciate Samsung’s move towards equipping its affordable devices with 4G, we can’t help but wonder at its pricing strategy. The Galaxy J1 4G’s specs are mediocre at best, and when we consider its price tag, it becomes even harder to recommend. The competition in the budget 4G segment includes some very commendable smartphones like the YU Yureka (review), Xiaomi Redmi Note 4G (review) and Lenovo A6000 (unboxing | first impressions), to name a few. Samsung has learnt from many of its mistakes, but the company will need a revolution in its budget smartphone category if it wants to survive against the new breed of value-for-money devices we’ve been seeing from Indian and Chinese brands.