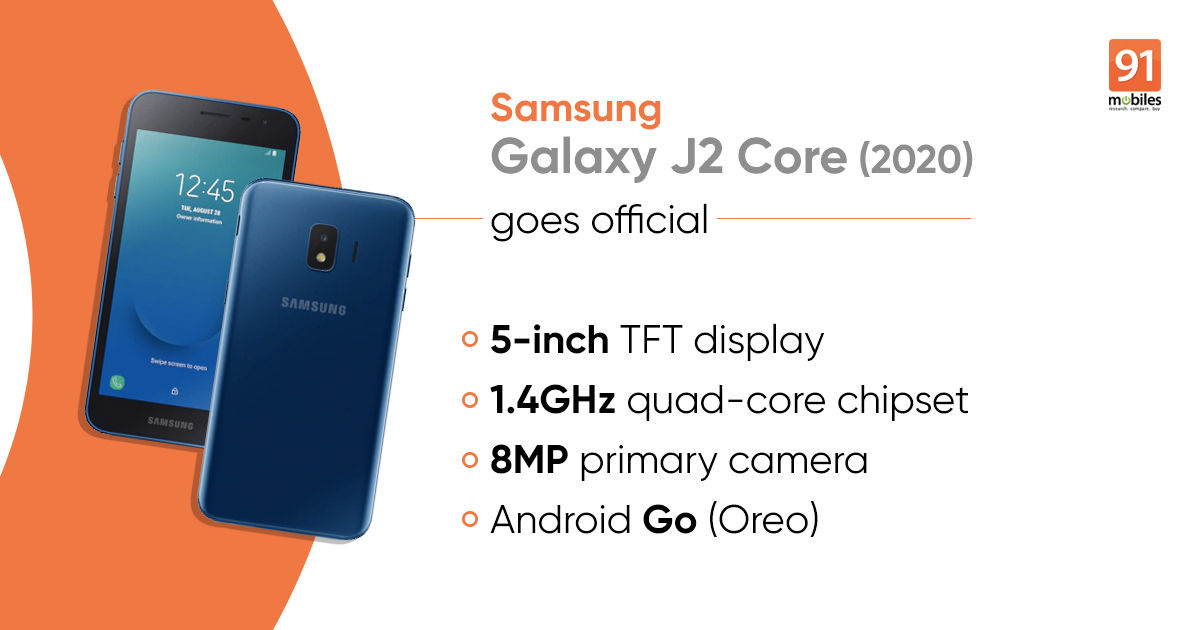 Samsung Galaxy J2 Core 2020 has been quietly launched in India. This is a refreshed version of the original Galaxy J2 Core from 2018. The new entry-level smartphone comes with the same design as the original. Even the specifications are largely similar, except for the storage which has been increased to 16GB from 8GB. The rest of the hardware and even the software on the new Galaxy J2 Core 2020 remain the same as before. The smartphone runs on a dated Android Go (Oreo edition) software out of the box and sports a 16:9 aspect ratio 5-inch display. Other key Galaxy J2 Core specifications include 1.4GHz quad-core chipset coupled with 1GB of RAM.

The Samsung Galaxy J2 Core 2020 price in India has been set at Rs 6,299. It’s officially the cheapest smartphone available on Samsung India website. The handset comes in black, blue, and gold colour options. The smartphone can be purchased starting today, but the shipping date is unclear considering e-commerce platforms are not allowed to deliver non-essential goods like smartphones during the lockdown. We believe the phone will reach buyers only after the lockdown is lifted on May 3rd.

Samsung Galaxy J2 Core 2020 is an Android Go smartphone that runs stripped down version of Android Oreo out of the box. The phone rocks a 1.4GHz quad-core chipset under the hood coupled with 1GB RAM and 16GB storage, which can be further expandable up to 256GB using a microSD card. It flaunts a 5-inch TFT display with 540 x 960 pixels resolution. The Galaxy J2 Core houses a 2,600mAh removable battery that is rated to last up to 11 hours of non-stop video streaming on YouTube Go.

For photography, the Samsung Galaxy J2 Core 2020 sports an 8MP primary camera with f/2.2 aperture lens and LED flash at the back. On the front, it has a 5MP shooter with f/2.2 aperture lens for selfies and video calling. Connectivity options include 4G LTE, dual-SIM slots, Wi-Fi, Bluetooth 4.2, and GPS. The phone measures 143.4mm x 72.1mm x 8.9mm and weighs 154 grams.