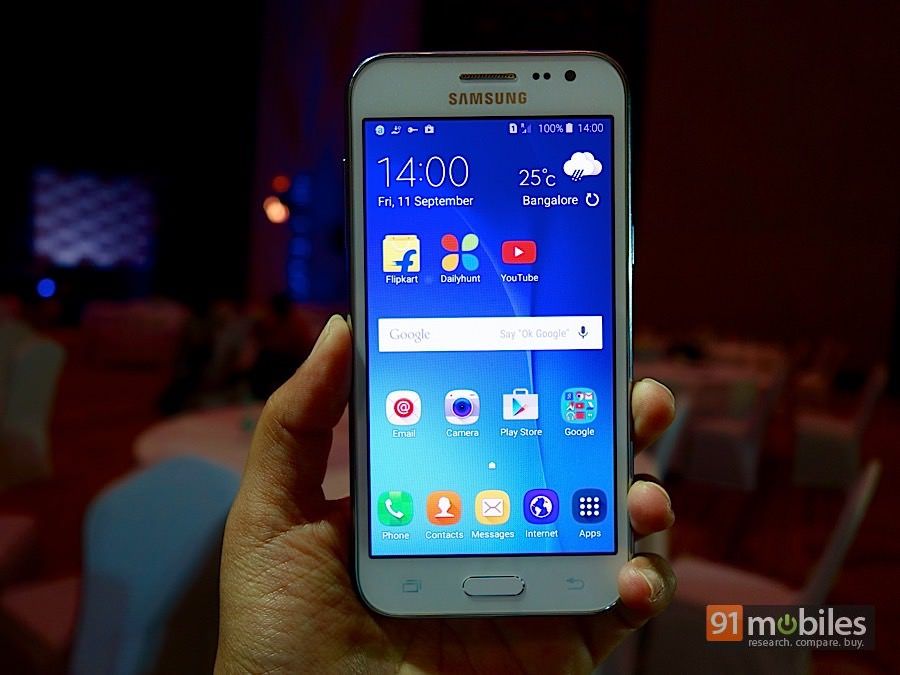 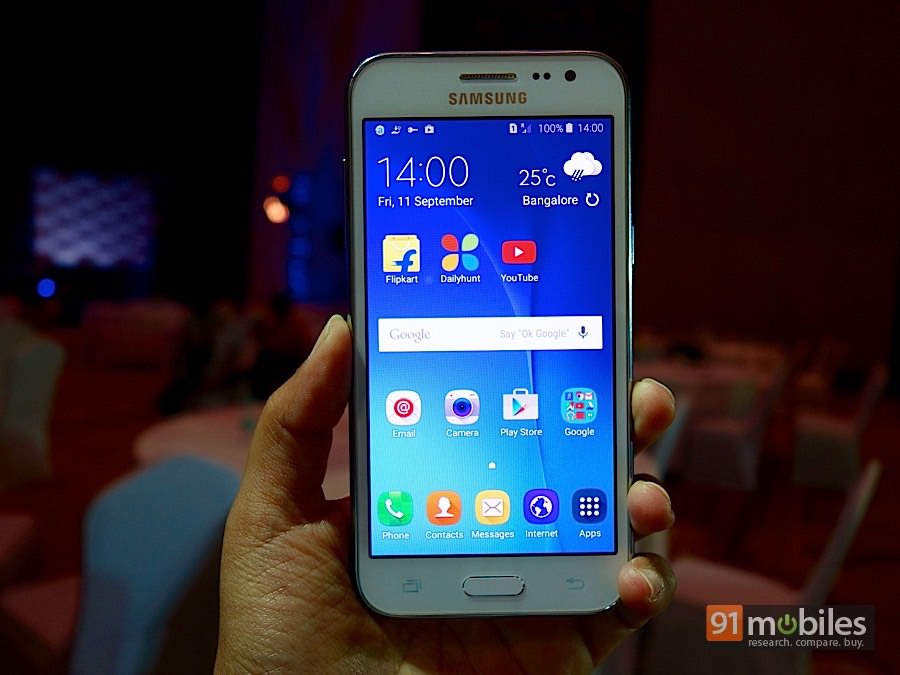 At an event in Bangalore today, Samsung launched its most affordable 4G smartphone, the Galaxy J2. The successor to the Galaxy J1 4G (first impressions), the J2 packs in improved design and hardware, and is also priced lower at Rs 8,490. We got a chance to go hands on with the device, and here’s our first thoughts.

As far as the looks go, the Galaxy J2 looks visibly more polished than its predecessor. Even though it’s still made of plastic, the quality of materials seems improved, and the overall thickness has been brought down to 8.3mm. The Galaxy J2 features a compact 4.7-inch display, which incidentally is still larger than the J1 4G’s 4.3-inch screen. We had criticised the J1 4G for not featuring a HD display, and unfortunately Samsung still hasn’t incorporated this into its latest device. The Galaxy J2 features a display resolution of just 960 x 540 pixels, which equates to a pixel density of 245ppi. What the screen lacks in sharpness though, it makes up for with its AMOLED panel, which makes colours appear deliciously vibrant. 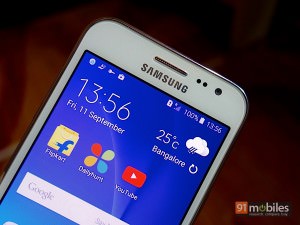 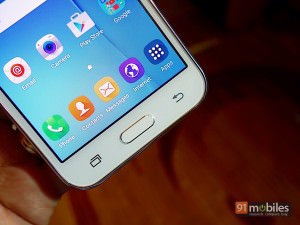 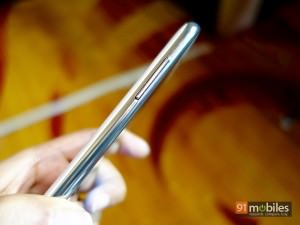 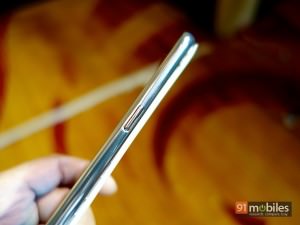 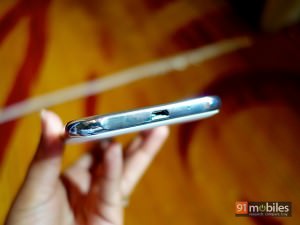 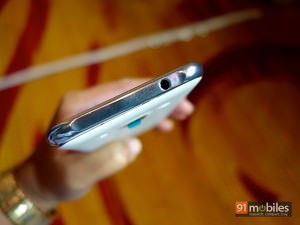 The facade of the smartphone features a metal rim, and above the screen you’ll find Samsung branding, the earpiece, 2MP front camera and various sensors. Below the display you’ll find Samsung’s standard arrangement of the physical home button, return and multi-tasking key. Coming to the port and button placement, the right spine is where you’ll find the power button, while the volume rocker is located on the left. The top edge houses the 3.5mm audio jack, while the bottom edge is where the micro-USB port and primary microphone are located. Flipping the phone around, you’ll be greeted by the faux leather back panel which is home to the primary 5MP camera, LED flash and loudspeaker grill on the top, followed by Samsung branding at the centre. 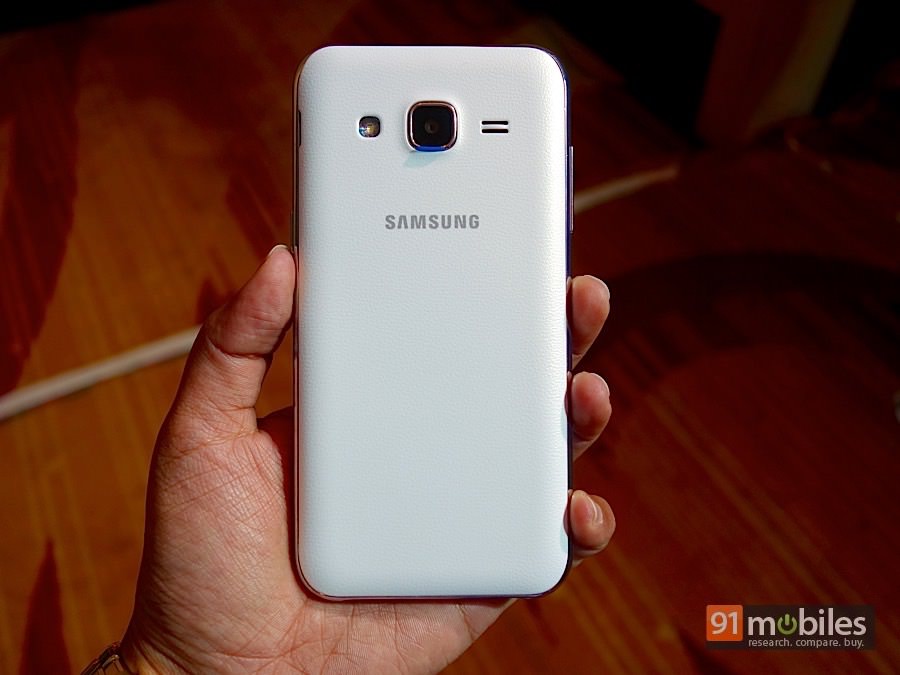 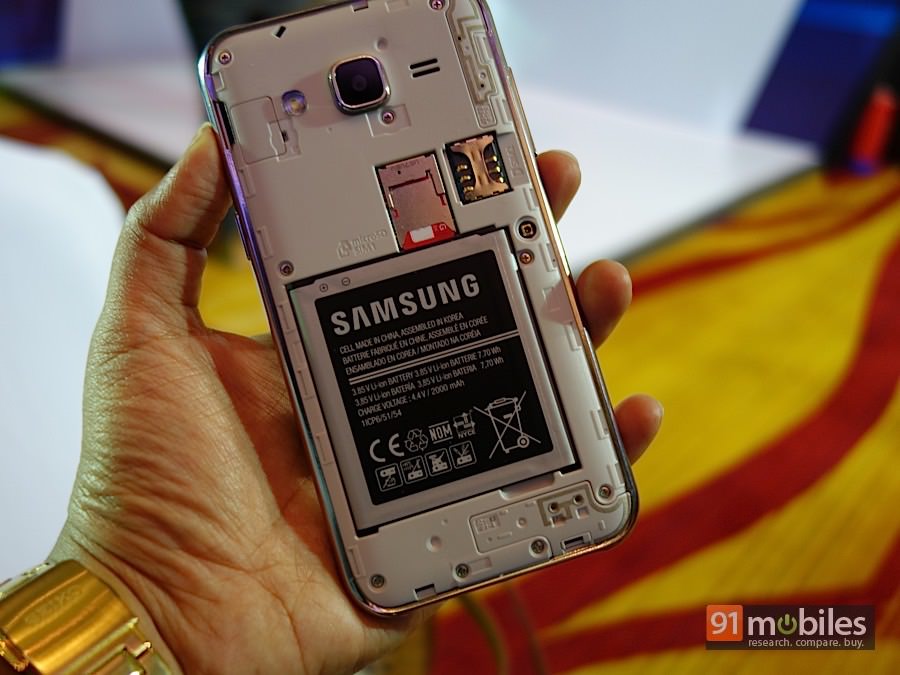 The back panel is easily removed via a notch on the side, and reveals the user-replaceable 2,000mAh battery, dual micro-SIM card slots and microSD card slot. Our demo unit of the Galaxy J2 was white, but you’ll also be able to purchase it in gold or black hues. 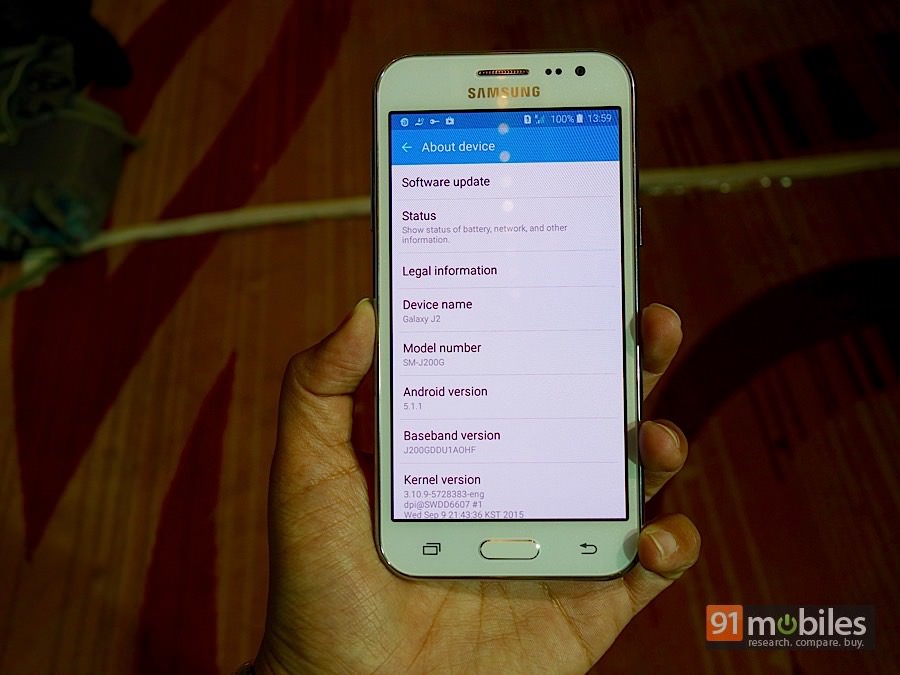 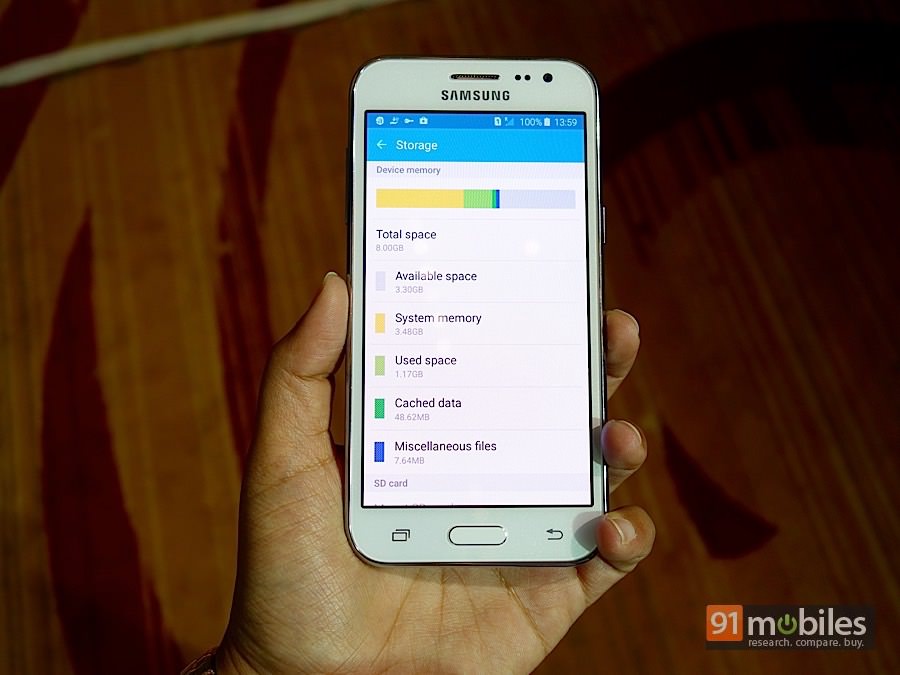 Handling performance on the Galaxy J2 is a 1.3GHz quad-core Exynos 3475 chipset, paired with 1GB of RAM. There’s 8GB of inbuilt storage, and on our demo unit, there was around 3.3GB user available. The storage can be expanded up to an additional 128GB. On the software side, the smartphone runs Android 5.1.1 Lollipop overlaid with Samsung’s TouchWiz UI. 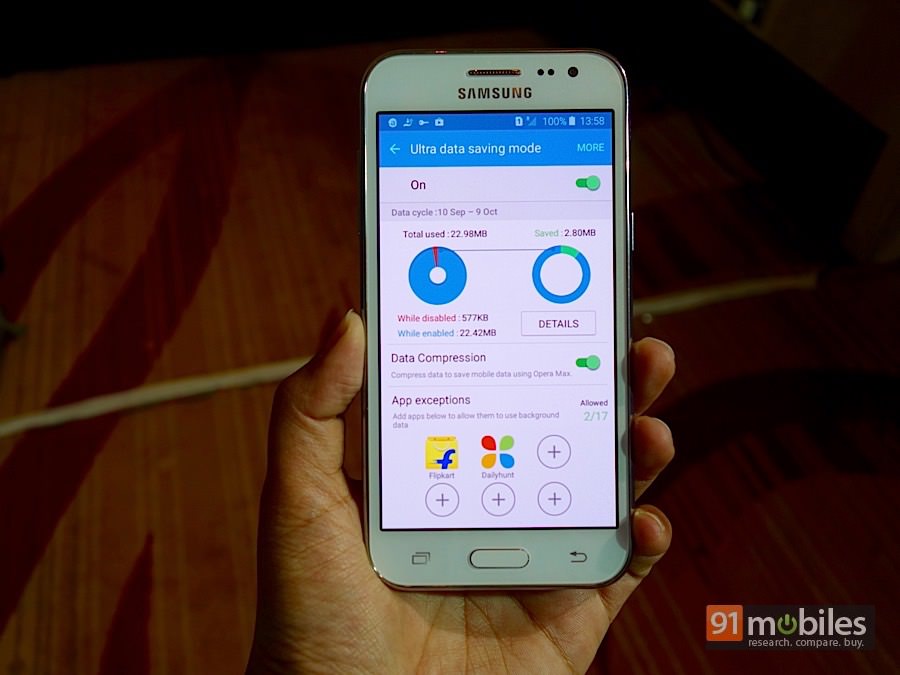 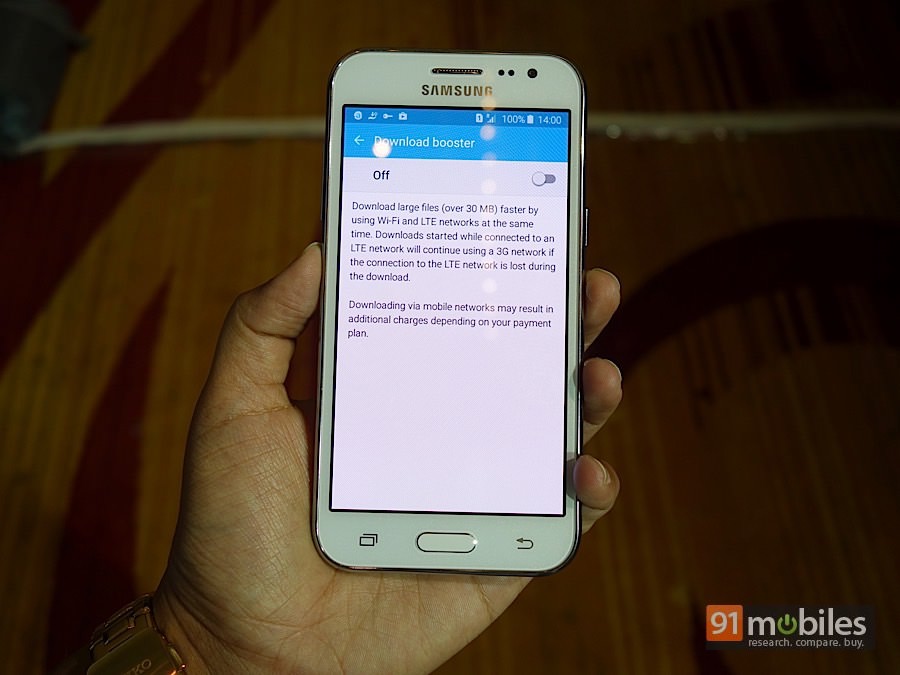 Apart from the usual pre-loaded apps and content, you’ll also find an option called Smart Manager, where you can manage storage, RAM, battery and security. Here is where you’ll find the Ultra Data Saving mode, which Samsung claims offers up to 50 percent in data savings. When we went into the settings though, we found that the data compression is achieved using the Opera Max browser, which any Android user can download from the Play Store. The UDS mode also lets you restrict apps from consuming background data. Another feature Samsung has incorporated on the Galaxy J2 is a download booster, which basically combines your 4G and Wi-Fi networks to help you download large files quickly. As far as the connectivity options go, apart from 4G and dual-SIM, the Galaxy J2 features Wi-Fi, Wi-Fi Direct, Bluetooth 4.1 and GPS + GLONASS. 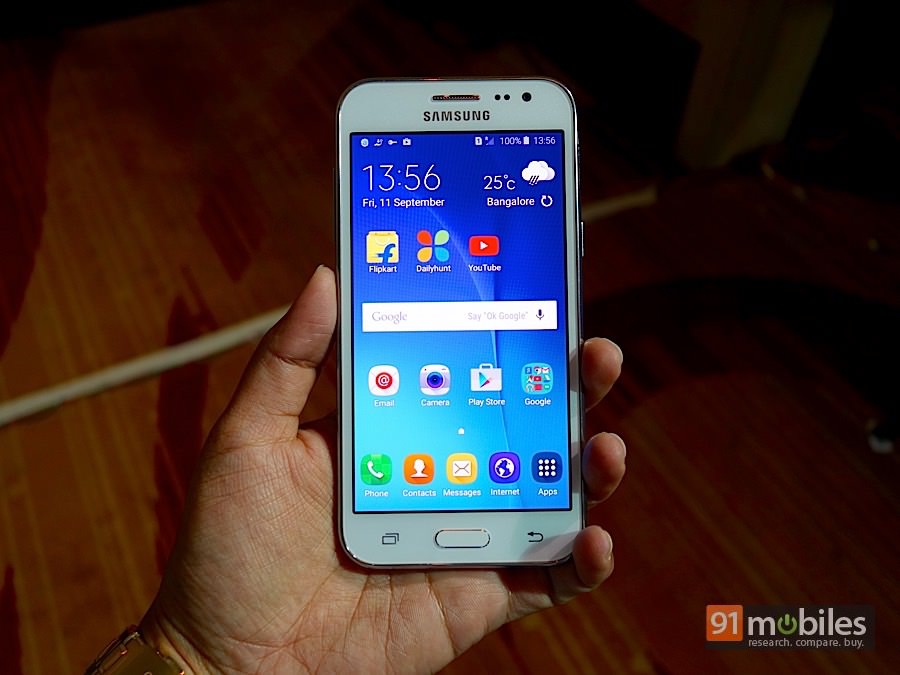 Samsung’s idea of affordable devices is widely different from what we’ve become used to of late. While the cheapest 4G smartphone in India currently costs just Rs 4,990, the Galaxy J2 is priced at nearly double of that. From a specs point of view, there are several more commendable devices you can get for a cheaper price, such as the Xiaomi Redmi 2 Prime, Lenovo A6000 Plus (review) and YU Yuphoria (review), to name a few. How the Galaxy J2 stacks up to the competition in terms of performance though is something we’ll know only once we spend more time with the handset.
ShareTweetShare
Share