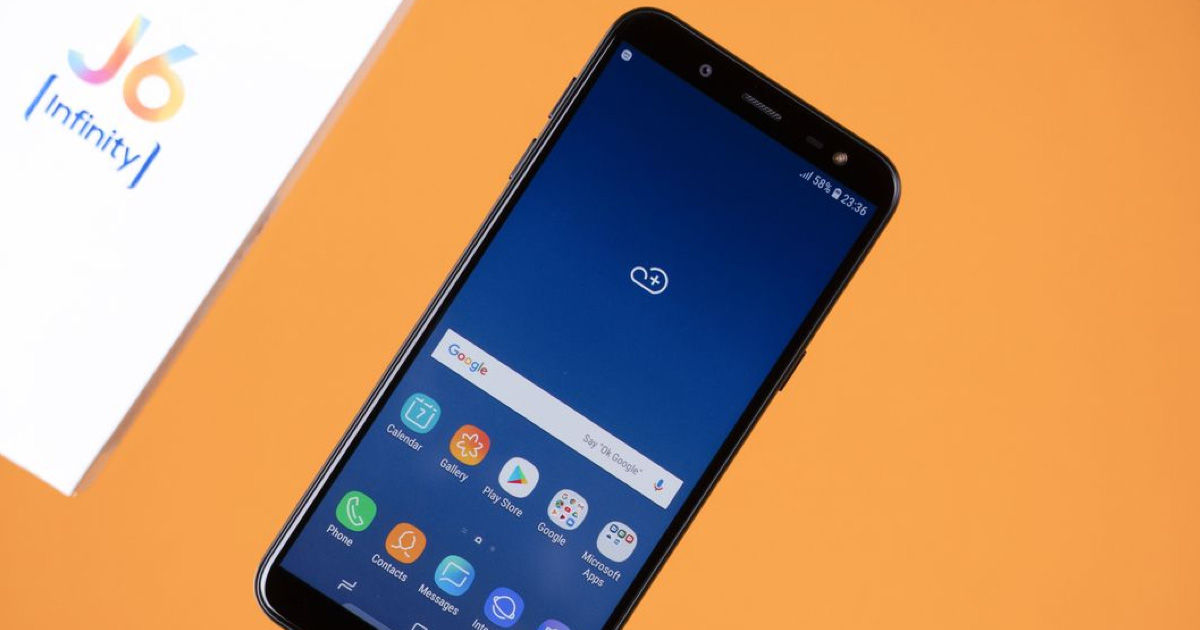 “The Galaxy J6 comes with a 5.6-inch HD+ panel and is powered by an Exynos 7 series processor”

If there’s one brand which has a finger in every pie, it’s undoubtedly Samsung. The Chaebol launches a myriad of smartphones throughout the year, catering to different audiences and price segments. Soon after unveiling the Samsung Galaxy S9 (review) and S9+ (review) in the premium segment, the brand has now announced a bunch of affordable smartphones. We recently gave you a sneak peek at the Galaxy A6+ (first impressions), which retails for Rs 25,990. In this article, let’s take a closer look at the company’s mid-budget offering that comes in the form of the Samsung Galaxy J6. 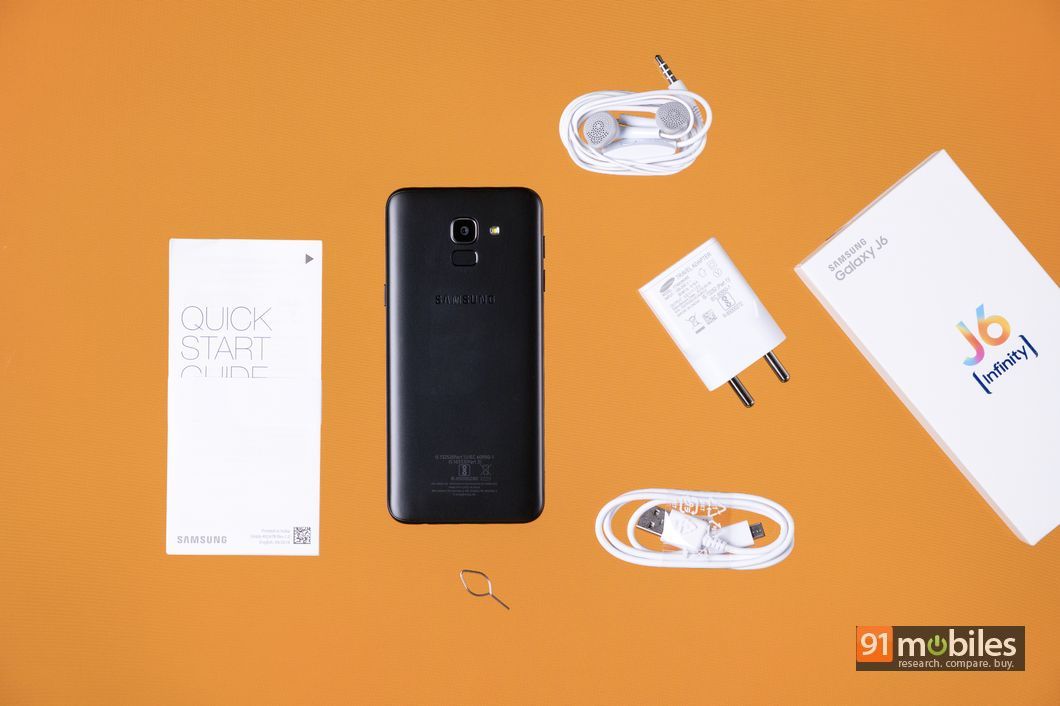 The Samsung Galaxy J6 comes in a minimalistic white cardboard box. Taking the lid off reveals the smartphone itself, followed by some documentation in the form of the warranty and a quick-start guide. There are three different slots positioned underneath the tray, which house a wall charger, a micro-USB cable as well as a pair of earphones. 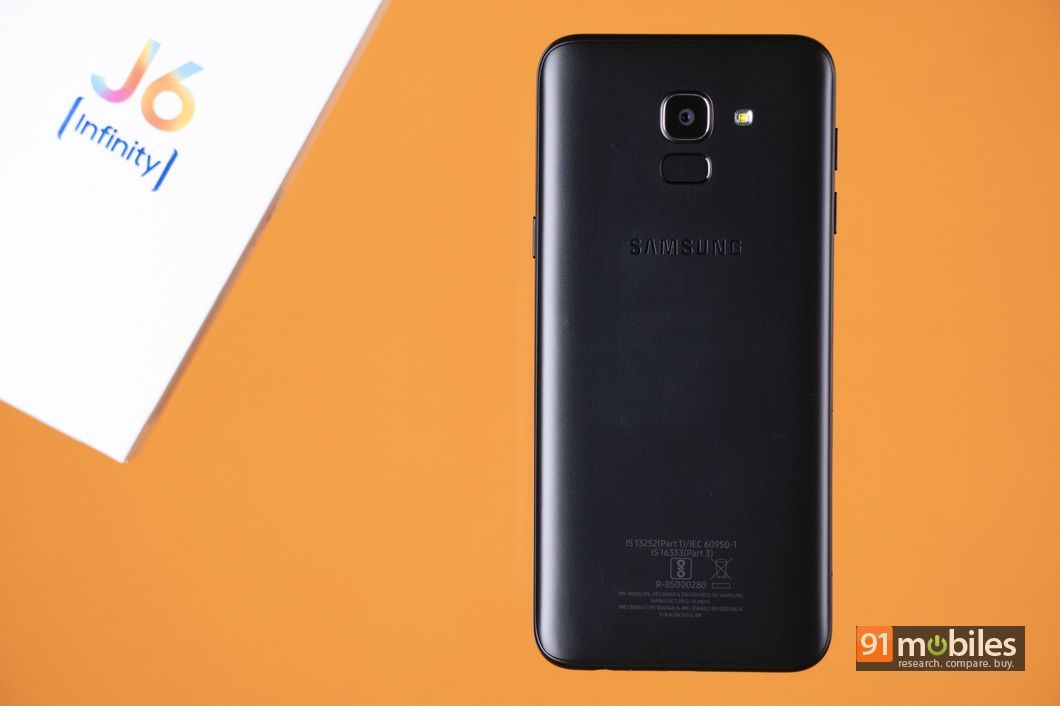 Design-wise, the Samsung Galaxy J6 makes use of a polycarbonate back which sadly, isn’t as sturdy as the ones on metal-clad smartphones, or as premium-looking as devices with glass-sandwich designs. However, the finish does make the J6 feather light and therefore, the handset is quite comfortable to use with just one hand. Moreover, we also appreciate the fact that the J6’s back doesn’t smudge easily and it isn’t prone to attracting fingerprints either. 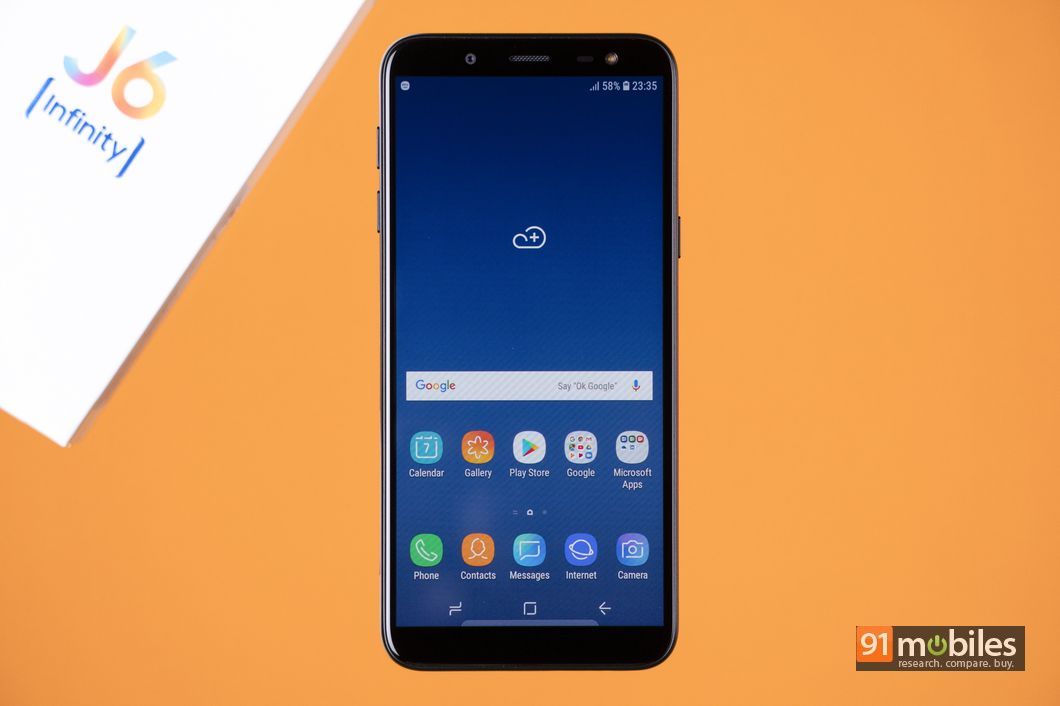 The Samsung Galaxy J6’s window to the world is a 5.6-inch Infinity display, which comes with HD+ resolution and a Super AMOLED panel. The screen boasts an aspect ratio of 18.5:9 and therefore, is taller and narrower than a traditional 16:9 display, which plays a huge role in making the Galaxy J6 easier to use single-handedly. While we were pleased with the viewing angles and brightness levels of the display, we would have liked to see more pixels crammed into the screen for better sharpness.

In terms of the ports and button placement, the speaker grille and the power button are placed on the right edge. The left side houses the volume rocker, and at the bottom, the Galaxy J6 features a headphone socket and a micro-USB port for charging and data transfers. A fingerprint sensor has been positioned at the back, below the smartphone’s camera module. It’s quite small in size, but worked well during our initial testing. The phone also comes with the face unlock feature, which worked flawlessly when we tested it in a well-lit environment 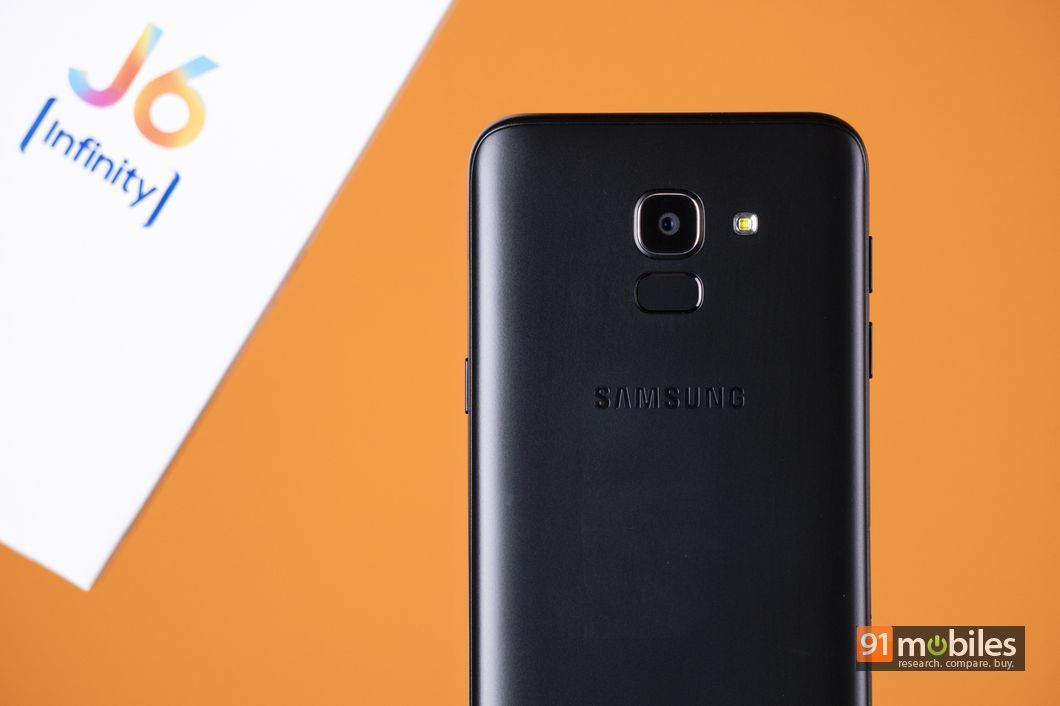 Underneath its plastic chassis, the Samsung Galaxy J6 is powered by an Exynos 7 Series octa-core processor, which works alongside either 3GB or 4GB of RAM. Depending upon the variant, you’ll either get 32GB or 64GB of built-in memory, which can be expanded up to 256GB by means of a microSD card. While it’s too early to comment on the smartphone’s performance, our brief session with the handset was free of lags and stutters. There were no traces of slowdown when we jumped in and out of some pre-installed applications. However, make sure to stick around for our full review to know if the phone can offer a similar performance under heavy usage of gaming and multitasking. 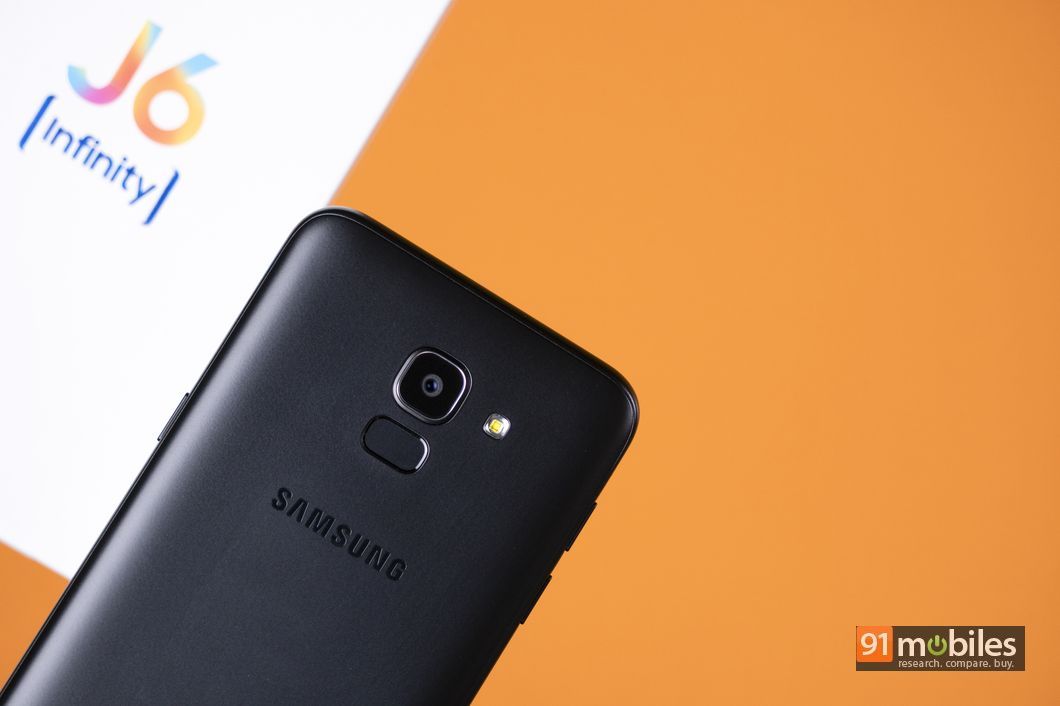 In the camera department, the Samsung Galaxy J6 ships with single 13MP and 8MP snappers at the back and the front respectively. The smartphone also gets a dedicated LED flash module for both the sensors. 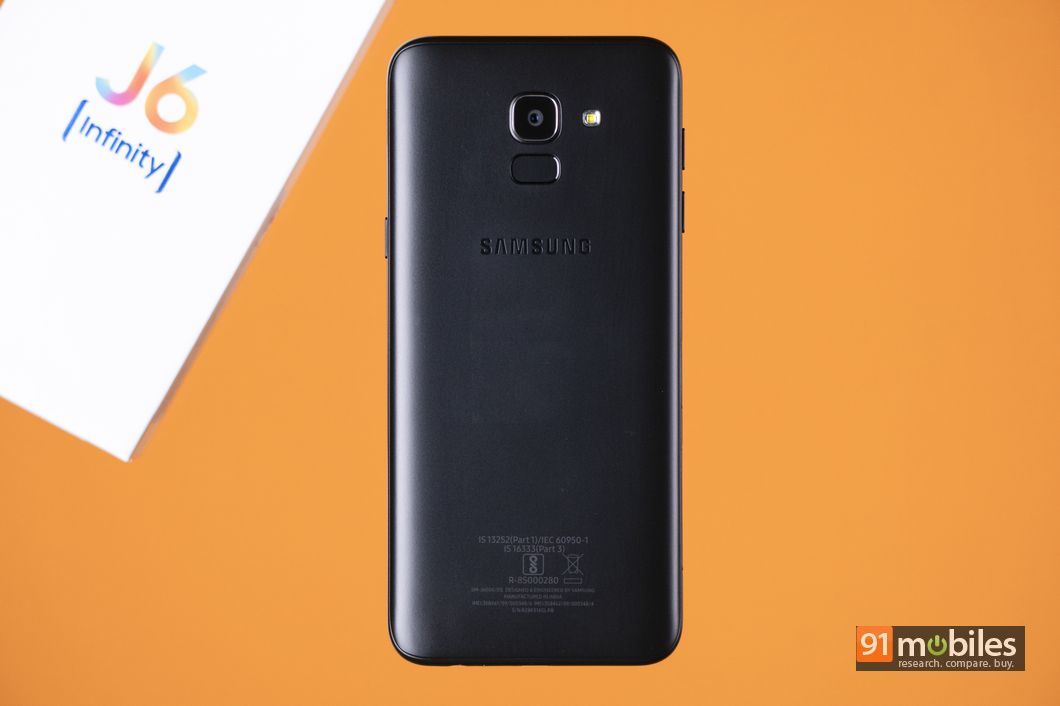 The Samsung Galaxy J6 is fuelled by a 3,000mAh battery and boots Android Oreo with a layer of Experience UX 9 on top. The 3GB RAM variant of the device retails for Rs 13,990, whereas the 4GB RAM variant will set you back by Rs 16,490.

For its asking price, the Galaxy J6 faces some stiff competition from the likes of the Xiaomi Redmi Note 5 Pro (review) as well as the ASUS Zenfone Max Pro M1 (review), both of which offer sharper displays and a lot more grunt under the hood. Stay tuned for our review to see how well the Samsung Galaxy J6 fares against the competition.