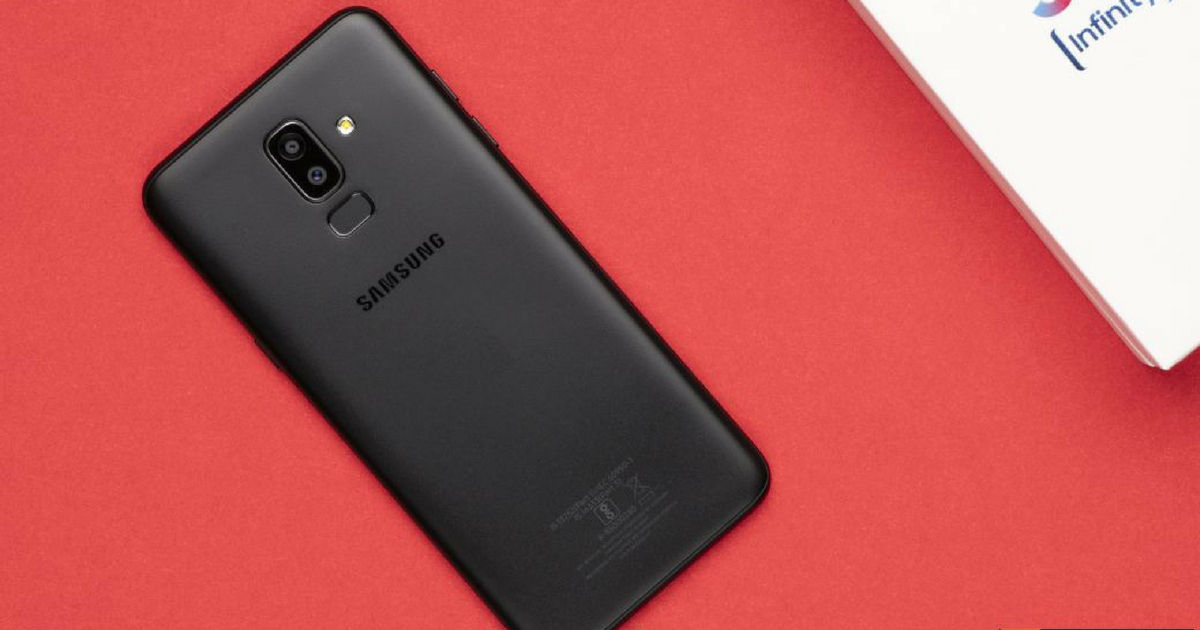 “The Samsung Galaxy J8 is the harbinger of 18:9 displays in the more affordable J-series of smartphones”

There was a time when Samsung used to maintain a clear distinction between its affordable and flagship smartphones. For years, one could relate affordable Samsung phones to plastic builds and low specs. However, Samsung has been slowly blurring the lines between its premium and affordable handsets by bringing features like the Infinity Display and metal builds to the latter. Now, the brand has introduced its Infinity Display to the Galaxy J-series with the launch of Galaxy J6 (review) and J8. We got our hands on the latter and here is what we think. 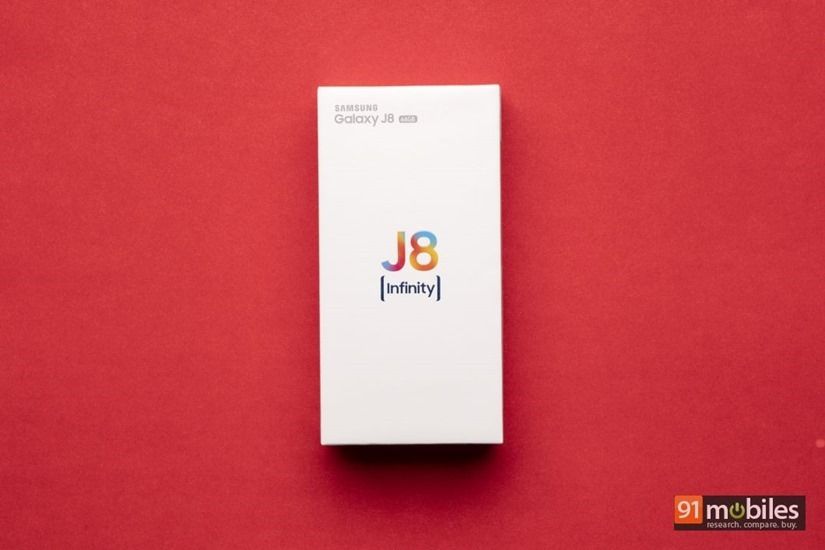 The packaging of the Galaxy J8 is a minimalistic white box with branding on top and key specs listed at the bottom. Lifting the top of the box, you will be greeted by the metal-clad Galaxy J8 lying atop a tray. In the compartment below, you will find the quick start guide, documentation, power adapter and micro-USB cable. Samsung has also bundled a pair of in-ear headphones with the smartphone. However, this is all there is to the package. 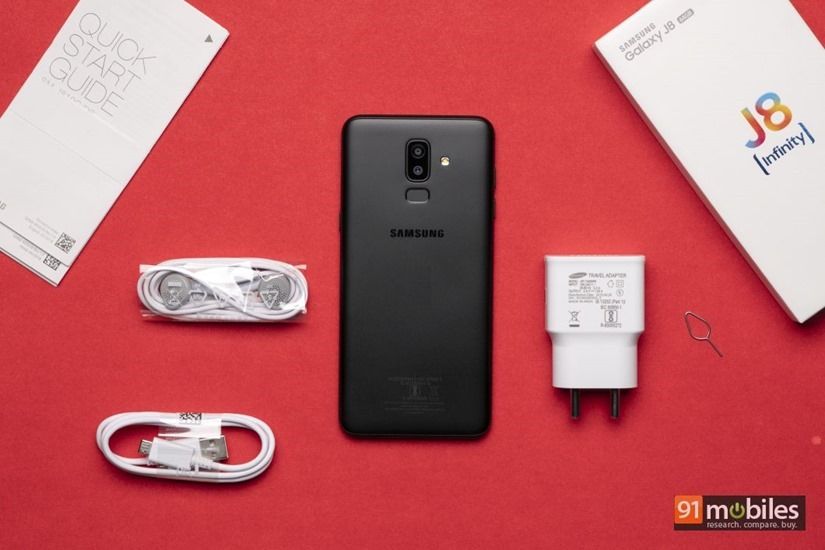 Gone are the days when Galaxy J-series smartphones felt like plastic slabs in the hand. The Galaxy J8 flaunts a metal unibody construction, which also has a confidence-inducing heft to it. The subtle curves on the back panel make the smartphone rest comfortably in the palm. The right edge of the handset is home to the loudspeaker and power button, whereas the left edge houses the volume buttons, dual-SIM slot, and a dedicated microSD card slot. The micro-USB port and 3.5mm audio jack are located at the bottom. The fascia of the handset is minimal with an 18:9 display, while the vertically-stacked dual camera module and fingerprint scanner are placed on the rear.

The fingerprint scanner is oblong and smaller than before, but once you get used to it, it’s pretty accurate and fast. There is also face unlock for those who prefer it.

Moving on, the Samsung Galaxy J8 comes with a massive 6-inch Super AMOLED HD+ display. Considering the slimmer bezels and 18.5:9 aspect ratio, the handset has a smaller footprint than you would expect from a 6-inch handset. The display is pretty sharp and vivid, though we did notice a bluish tint when viewing from sides. The smartphone gets a Snapdragon 450 chipset ticking at its core, backed by 4GB RAM. While the handset is pretty snappy when it comes to multitasking, the heavy animations of new Experience UI seems to be slowing down the loading time. Speaking of the Experience UI, the interface is based on Android 8.0 Oreo. The smartphone gets 64GB storage onboard, of which 51GB is available to the end user. The device is powered by a 3,500mAh battery. 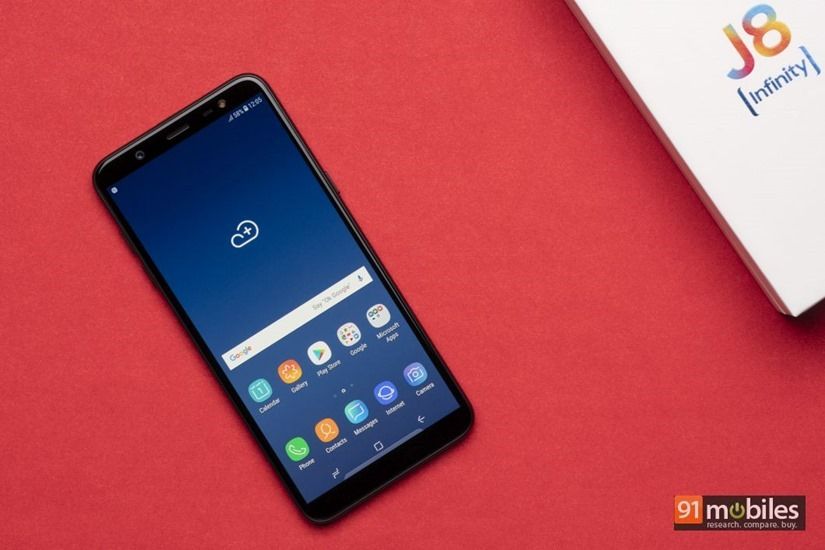 The dual camera setup on the rear panel comprises 16-megapixel + 5-megapixel sensors, accompanied by an LED flash. The camera gets various modes like beauty, live focus (bokeh), panorama, night, pro and live sticker. All modes work as intended with the Live Focus mode being able to detect edges quite accurately. What caught our attention was the new Social mode, which lets you share videos and pictures instantly with selected contacts or on social media. The selfie camera on Galaxy J8 is a 16-megapixel unit accompanied by an LED flash and features like selfie focus, stickers, wide-angle selfie and beautify mode.

Samsung has priced the Galaxy J8 at Rs 18,990 and at this price point it goes up against some serious contenders like Xiaomi Redmi Note 5 Pro (review), Nokia 6.1 (review) and Huawei P20 Lite (first impressions). And with the Snapdragon 450 chipset powering it, the Samsung offering does seem underpowered in comparison. That said, it would be unfair to judge it just on the basis of specs, so do give us time to take the phone through a proper review process. Coming up soon…