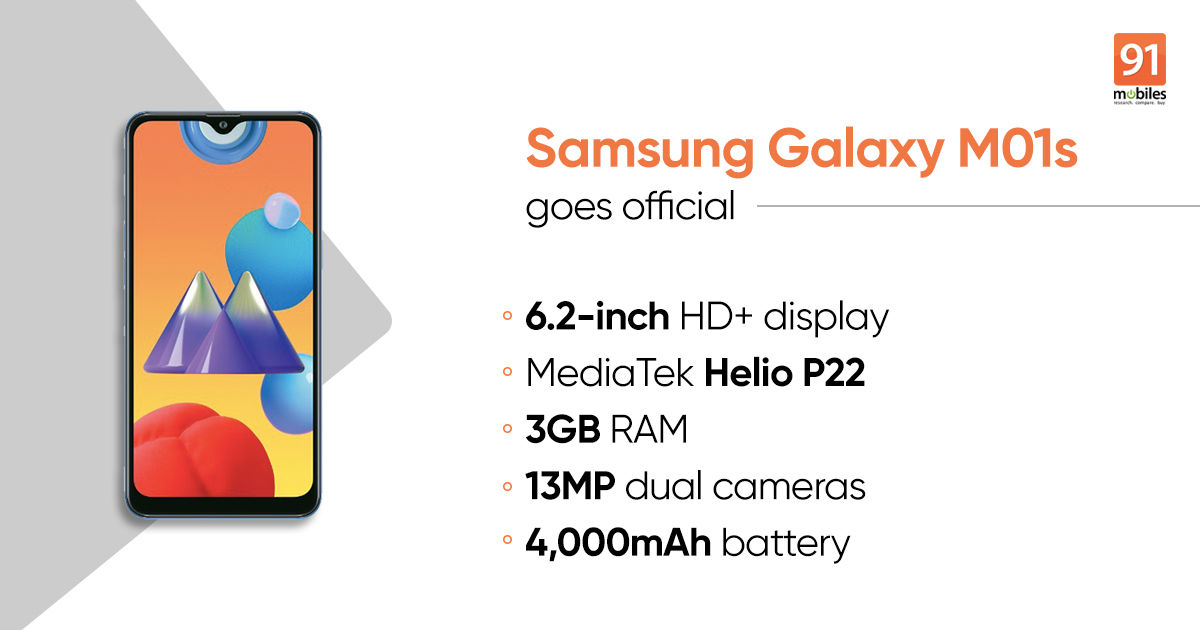 Samsung Galaxy M01s has been launched in India as a follow-up to the Galaxy M01 that debuted in the country back in June. The entry-level Samsung phone brings upgrades over the predecessor such as a physical fingerprint sensor for security and Dolby Atmos for a better audio experience. The Samsung Galaxy M01s budget phone comes with a waterdrop notch to house the selfie camera, dual camera and MediaTek Helio P22 SoC. Here’s a quick look at the Samsung Galaxy M01s price in India, sale date, and specifications.

The Samsung Galaxy M01s is priced at Rs 9,999 for the single variant and comes in Light Blue and Gray colour options. It is available across Samsung’s offline retail stores, Samsung.com, and other major e-commerce portals.

The Samsung Galaxy M01s sports a 6.2-inch HD+ TFT Infinity-V display with a waterdrop notch. It is powered by the MediaTek Helio P22 SoC coupled with 3GB RAM and 32GB internal storage that is further expandable via a microSD card up to 512GB. The phone boots Android OS with OneUI custom layer on top. However, the exact Android version isn’t revealed.

As for the optics, the Samsung Galaxy M01s features a dual-camera setup consisting of a 13MP primary sensor and a 2MP depth lens for portrait shots. For selfies and video chats, there is an 8MP unit for selfies and video chats. There is a rear-mounted fingerprint sensor and face unlock for security and just measure 7.8mm in thickness. A 4,000mAh battery fuels the handset and it has support for Dolby Atmos technology.