91mobiles.com
Home Comparisons Samsung Galaxy M02s vs Realme C15 vs Moto E7+: which is the... 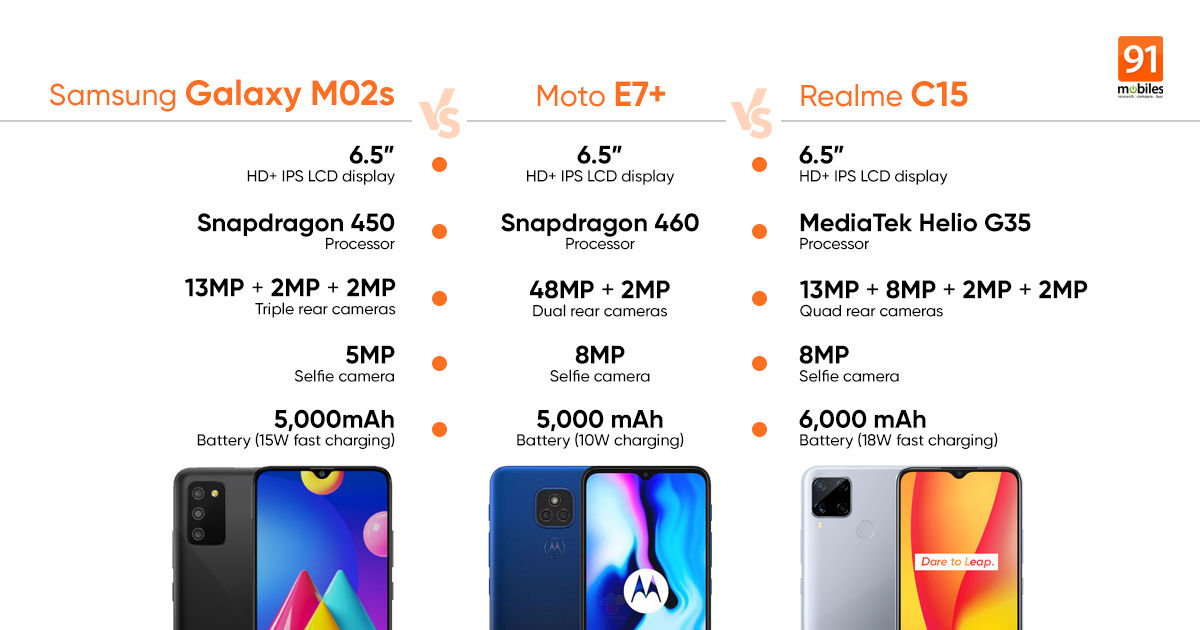 The Samsung Galaxy M02s is the Korean brand’s latest entry into the competitive sub-Rs 10,000 segment, arguably one of the most heavily contested price brackets in the Indian market. It, of course, faces competition from the numerous alternatives available from competitors such as Realme, Xiaomi, and others. Today, we’ll be taking a look at how the Samsung Galaxy M02s fares against the Realme C15 and Moto E7+. Our last comparison determined that the Realme Narzo 20A was a better choice when pitted against the Redmi 9 and Samsung Galaxy M02s. Does Samsung’s budget offering have what it takes to defeat Realme C15 and Moto E7+? Let’s find out.

Both the Realme C15 and Galaxy M02s are priced in India at Rs 8,999 for the base variant with 3GB of RAM and 32GB of storage, which is fairly commonplace for low-cost smartphones. On the other hand, the Moto E7+ retails at Rs 9,499 but gets you 4GB of RAM and 64GB of storage. Thankfully, all three phones have expandable storage, so you don’t have to worry about running out of space anytime soon. You would be better off spending a paltry Rs 500 extra for an extra gig of RAM. You even get double the storage for your troubles. Despite its slightly higher price tag, the Moto E7+ offers better value for money in this aspect.

On account of all three smartphones falling under the ‘budget’ category, nothing stands out about their designs. For the most part, they all look the same, complete with a waterdrop-style notch for the selfie camera. Similarly, the Samsung, Realme, and Moto phones all have polycarbonate bodies. The lack of a fingerprint scanner on the Samsung Galaxy M02s is somewhat of a disappointment. While both the Realme C15 and Motorola Moto E7+ offer rear-mounted fingerprint scanners, only the former protects its screen with a layer of Corning Gorilla Glass 3. Hence, the Realme C15 is the winner here.

Despite making massive headway in bringing 5G to low-cost smartphones, some of MediaTek’s chipsets still cannot stand up against Qualcomm’s offerings. The Realme C15’s MediaTek Helio G35 is one such example. Despite it being marketed as a ‘gaming’ chipset, our Realme C15 review found that one can’t do a whole lot of gaming with it. Overall That leaves us only with the Galaxy M02s and Moto E7+, running a Qualcomm Snapdragon 450 and Snapdragon 460, respectively.

Here’s where things begin to get interesting. Although the Realm C15 technically comes with four rear cameras (13MP primary + 8MP ultra-wide + 2MP B/W + 2MP depth), our Realme C15 review found that the two 2MP lenses don’t really bring anything to the table. Its 8MP selfie camera is average, at best, too. The Samsung Galaxy M02s is only slightly better off with its triple-camera array (13MP primary + 2MP depth + 2MP macro) and 5MP selfie camera. The Moto E7+ only comes with two rear cameras (48MP primary + 2MP depth) and an 8MP selfie camera. Despite the seemingly fewer camera lenses, our Moto E7+ review found that the device managed to capture high-quality photos under a variety of lighting conditions. The 48MP sensor on the Moto handset manages to handily outperform everything Realme and Samsung have to offer, making it the undisputed winner of this segment.

Both the Samsung Galaxy M02s and Moto E7+ come with a 5,000mAh battery. The former supports fast charging at 15W, while the latter is restricted to 10W. The Realme C15 has both devices beat, as its colossal 6,000mAh battery supports fast charging at 18W, despite using a microUSB port. The Samsung and Realme smartphones run a heavily customised version of Android 10 out of the box. The Moto E7+, on the other hand, runs a clean build with virtually no customization. It will come as a godsend for many users, especially ones who have to deal with the copious amounts of bloatware on devices made by Xiaomi, Honor, etc. The only downside with the Moto E7+ is that Motorola is fairly sporadic with its updates, with several low-cost devices having to wait months for a major Android update.

While the Realme C15 and Samsung Galaxy M02s have their benefits, such as a higher-capacity battery and slightly better display, the Moto E7+ is the better device overall, as it comes with better cameras, a more powerful chipset, and offers better value for money. Realme fans, though, are better off with the Narzo 20A, as it comes with slightly better hardware compared to the Realme C15.