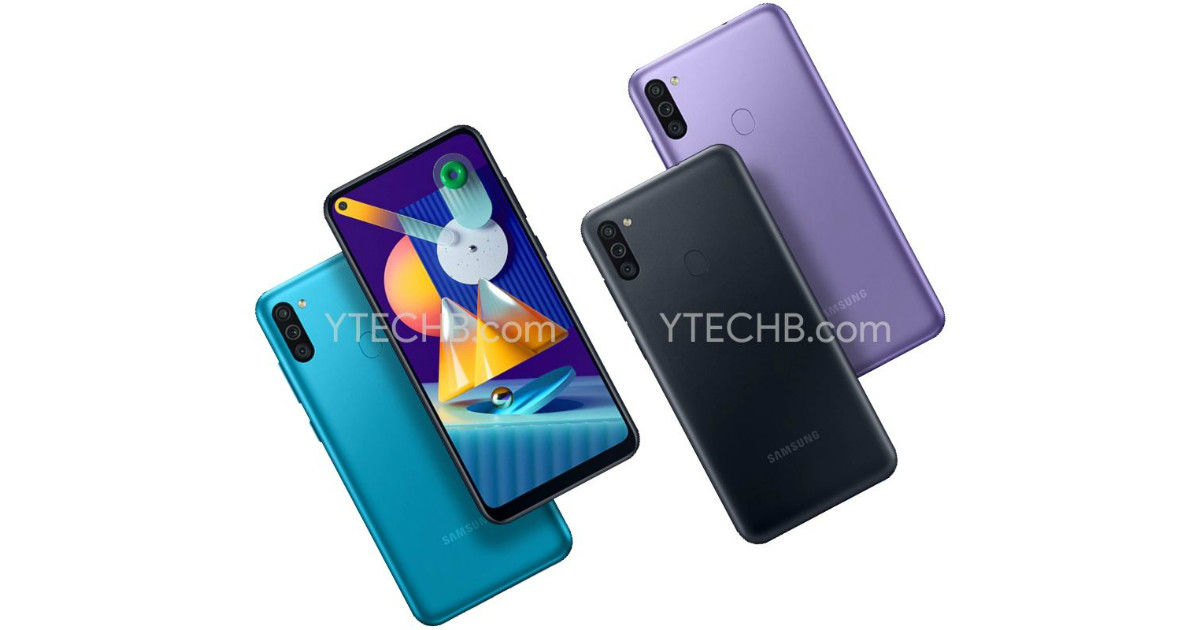 Samsung Galaxy M11 is expected to be the company’s entry-level Galaxy M smartphone for 2020. We have seen a few live images of the Galaxy M11 in recent times that tell us it will come with a punch-hole display, which would make it one of the cheapest phones with such a display. Now, a full set of Samsung Galaxy M11 specifications have appeared online along with press renders that further reveal everything we need to know about the upcoming budget phone.

According to some alleged leaked images and specifications from website YTechB, the Galaxy M11 will come with an octa-core processor clocked at 1.8GHz. This is supposedly paired with 3GB or 4GB of RAM, and 32GB or 64GB of native storage. While the processor SKU is not specified by name, speculations suggest that it is likely the Qualcomm Snapdragon 450 SoC. Among other specifications, the Galaxy M11 is said to sport a 6.4-inch display with HD+ resolution and screen aspect ratio of 19.5:9. The Galaxy M11 also appears to house a punch-hole cutout on the top left corner for the front camera.

This cutout is expected to house an 8MP front camera for selfies. To the rear, the Galaxy M11 will get a triple camera setup that is said to feature a 13MP main camera sensor with f/1.8 lens, a 5MP ultra-wide lens with f/2.2, and a 2MP depth sensing unit with f/2.4 lens. Being a budget device, the Galaxy M11 is seen sporting a physical fingerprint sensor to its rear, as is expected in this segment. The renders also show the Galaxy M11 colour options will include Black, Purple and Sky Blue.

Other Samsung Galaxy M11 specifications include a 5,000mAh battery with 15W fast charging. Input ports include a USB-C port and a 3.5mm audio port, and while the leak does not specify it, the device is almost certain to come with expandable storage. So far, the Wi-Fi Alliance certification of the Galaxy M11 has suggested that it will only support 2.4Ghz Wi-Fi. Given that its predecessor, the Galaxy M10, was priced at less than Rs 7,000, the Galaxy M11 is also expected to come with similar pricing in India.