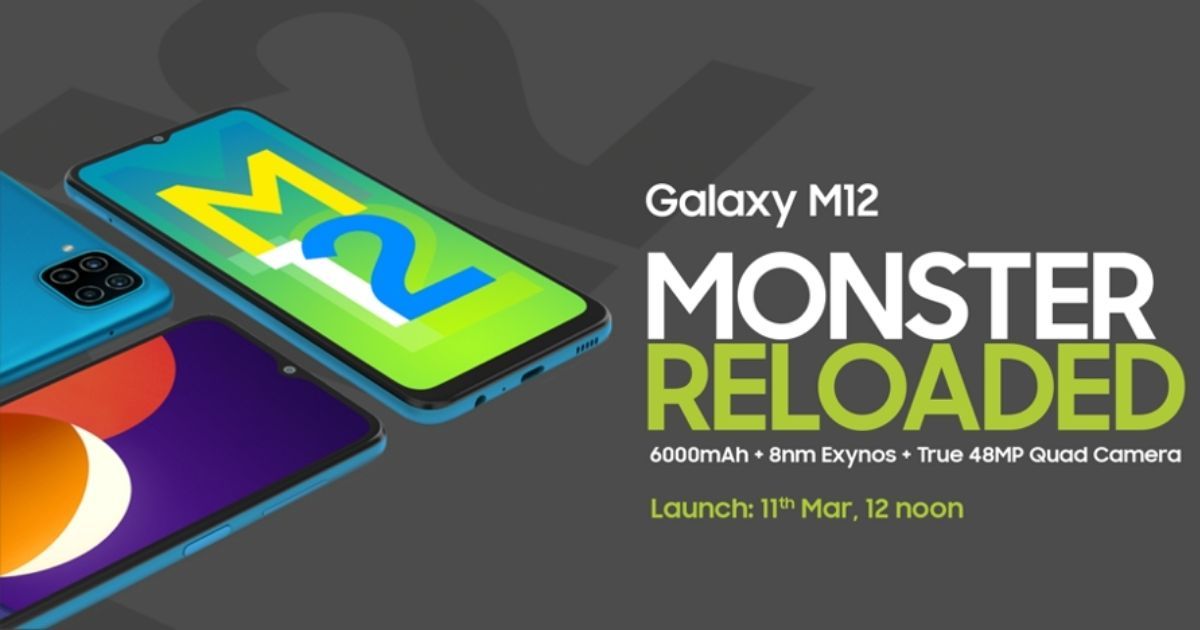 Gone are the days when smartphone OEMs would cut corners while designing a phone for the affordable segment. As a matter of fact, devices retailing at a wallet-friendly price point offer exceptional features nowadays, and you can thank tech giant Samsung for spearheading this change with its M-series of smartphones. Since its inception, the company’s M-series has offered never-seen-before features at a remarkable price point, the likes of which include mammoth batteries, stunning AMOLED displays, amazing cameras, and more. Unsurprisingly, the Samsung Galaxy M-series handsets always incur a frenzied demand, and if the teasers for the brand’s latest Samsung Galaxy M12 are anything to go by, then rest assured, this phone will also fly off the shelves. Why, you might ask? Well, here’s everything the brand has revealed about the smartphone so far.

Immersive viewing with a 90Hz display 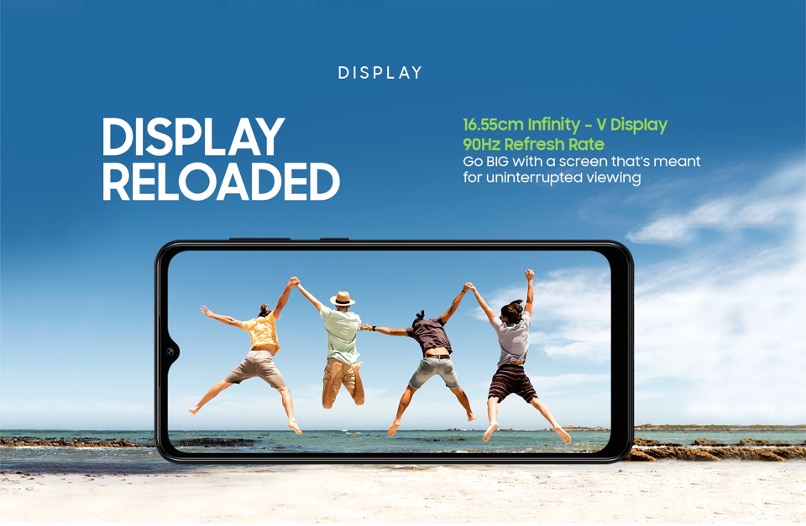 The centrepiece of the Samsung Galaxy M12 is the massive 6.5-inch Infinity-V display with 90Hz refresh rate. For the uninitiated, the 90Hz refresh rate makes the animations and UI transitions on the display ultra-smooth and snappy. Most devices in the affordable segment still ship with a 60Hz screen, which makes jumping in and out of an app, scrolling on the web, or gaming a jarring experience. This means the Samsung Galaxy M12 is in a league of its own and offers a premium display experience that will be appreciated by prospective buyers. Add to this the large 6.5-inch screen with the tiny Infinity-V notch and you get a smartphone that’s perfect for an immersive movie-watching experience and comfortable gaming sessions. In fact, you’d be hard-pressed to find a smartphone that’s as great as the Galaxy M12 in the affordable segment that offers such a smooth user experience on the display front. 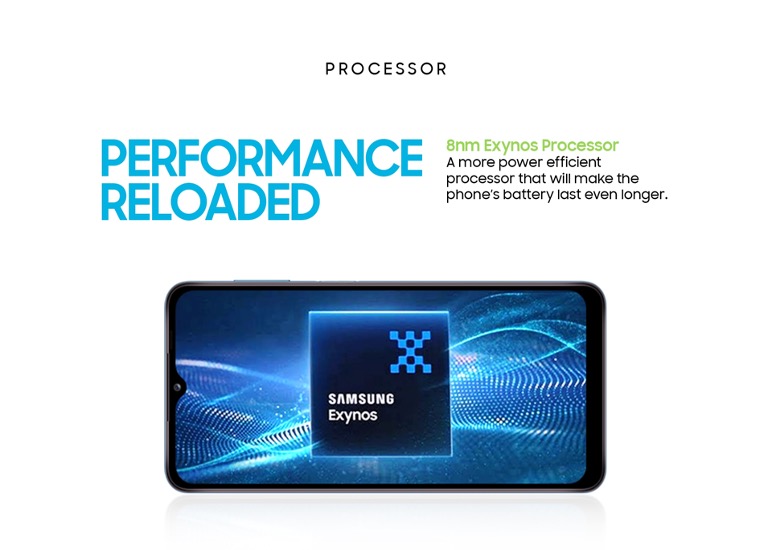 It seems like Samsung is leaving no stone unturned on the performance front with the Samsung Galaxy M12. The smartphone is powered by an in-house 8nm Exynos chip, something that is rare in the affordable segment. While the company hasn’t revealed the processor’s core specs, it is clear that the chip will benefit the smartphone’s battery life immensely, all thanks to its 8nm fabrication process. The 8nm process ensures the Samsung Galaxy M12 will deliver longer screen-on times, efficient power consumption, and uniform heat dissipation across the smartphone’s chassis. Of course, smooth, lag-free performance and amazing graphics are a given considering what we have seen in the Galaxy M-series in the past.

As a result, even when pushing the phone to its limits, be it whilst playing graphics-intensive games or multitasking on the phone, you will rarely see its temperature spike unpredictably. The company is yet to share the RAM and storage variants for the smartphone too, so stay tuned to this space for more updates on the same. But, for now, let’s talk about the next interesting feature of the handset – its powerful battery.

Monstrous battery that lasts for days 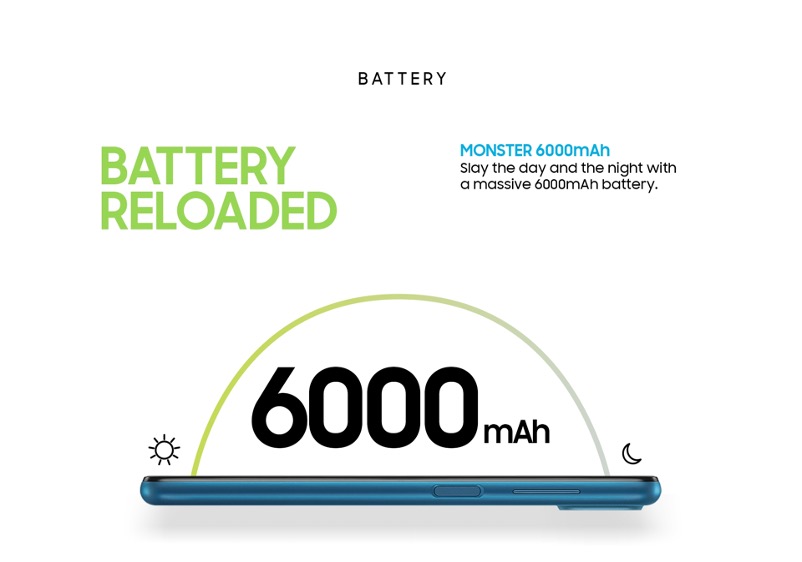 Battery life is one of the biggest considerations for any smartphone buyer. After all, you wouldn’t want the phone to give you battery anxiety as you go about your day. To that note, Samsung has furnished the Samsung Galaxy M12 with a massive 6,000mAh cell, which is among the biggest in its segment. Consequently, even on heavy usage, you should be able to get away with at least two days of battery backup off a single charge. What’s more, thanks in no small part to the smartphone’s extremely efficient 8nm Exynos processor, you can expect the phone to last you even three days on moderate usage. So, if you’re always out and about and use Google Maps quite a bit or are fond of binging through an entire TV show at once, you will find yourself right at home with the never-ending battery backup of Samsung Galaxy M12.

Samsung has a proclivity of offering fantastic optics for its phones, ensuring they offer plenty of versatility to budding photographers. The Samsung Galaxy M12 is no exception – the smartphone comes equipped with a True 48MP camera to click stunning photos with plenty of details to go by in every shot. What’s more, the company has equipped the smartphone with the upgraded ISOCELL GM2 sensor, which is known for its lowlight prowess. Correspondingly, you can expect the smartphone to click noise-free images, even after the sun has set. And that’s not all, as the smartphone will also feature three more camera sensors on the back, along with a capable selfie-shooter up front. While the details for the remaining camera sensors are not known at the moment, we’re certain that Samsung will enthrall buyers when it lifts the curtains off the device’s complete specs.

Needless to say, the Samsung Galaxy M12 is shaping up to be a rather promising device. Thanks to its capacious battery, high-refresh rate display, True 48MP ISOCELL GM2 camera sensor, and its battery-efficient processor, the smartphone is already grabbing the headlines and is undoubtedly unnerving the competition. The smartphone is slated for a launch on March 11th at 12 noon and will be available for purchase via Amazon.in. Furthermore, if you’d like to get notified about the launch, then head on over to Amazon.in or Samsung.com for all the updates.