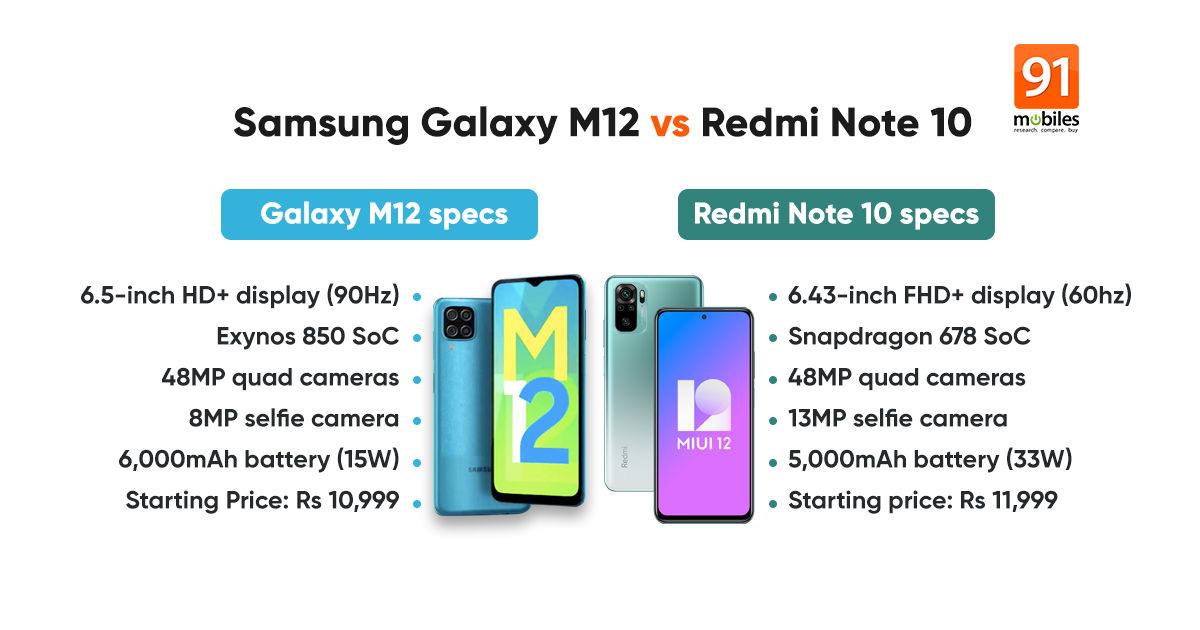 Samsung Galaxy M12 price in India was announced earlier today and it is notably the first Galaxy M series phone with a 90Hz display. Samsung Galaxy M12 specifications also include 48MP quad rear cameras, Exynos 850 SoC, a beefy 6,000mAh battery, and more. The phone will go on sale in the country from March 18th onwards. Considering that the Samsung Galaxy M12 price in India starts at Rs 10,999, we decided to see how the phone compares to the Redmi Note 10, which was launched in India recently. Which among the two phones offers the most value for your money? Let’s find out.

Samsung Galaxy M12 is priced at Rs 10,999 for the base 4GB+64GB variant, while the 6GB+128GB option comes with a Rs 13,499 price tag. That said, as part of the early bird offer, the phone will be available with up to Rs 1,000 instant cashback on EMI and non-EMI transactions using ICICI debit/ credit cards. The handset’s sale in India starts from March 18th onwards via Amazon India, Samsung E-store, and leading retail outlets.

Redmi Note 10 price in India is set at Rs 11,999 and Rs 13,999 for the same RAM and storage options as the Galaxy M12. The handset will be available for sale in the country from March 16th onwards.

Starting with Samsung Galaxy M12 specs, the handset packs a 6.5-inch HD+ TFT Infinity-V display that bears a 90Hz refresh rate, 20:9 aspect ratio, and Corning Gorilla Glass 3. The phone is powered by Exynos 850 SoC under the hood coupled with up to 6GB RAM and 128GB storage option, which is further expandable up to 256GB using a microSD card. Software-wise, the Galaxy M12 boots Android 11-based One UI 3 out of the box. The phone is driven by a 6,000mAh battery that is rated to deliver up to 58 hours of talk time on a 4G network. The handset supports a 15W fast charging solution over a Type-C port. 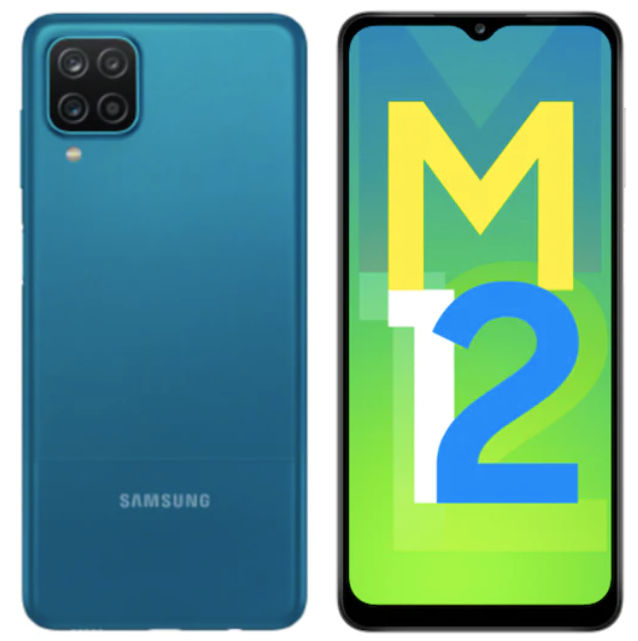 Samsung Galaxy M12 has a quad-camera setup on the back with 48MP (f/2.0) ISOCELL GM2 primary sensor, a 5MP (f/2.2) 123-degree ultra-wide secondary sensor, a 2MP macro sensor, and a 2MP depth sensor. At the front, it sports an 8MP selfie camera with an f/2.2 aperture placed inside the waterdrop-style notch. For security, the phone ships with a side-mounted fingerprint scanner. Connectivity options include 4G LTE, Wi-Fi 802.11 b/g/n, Bluetooth 5.0, GPS/ A-GPS, USB Type-C, and a 3.5mm headphone jack. 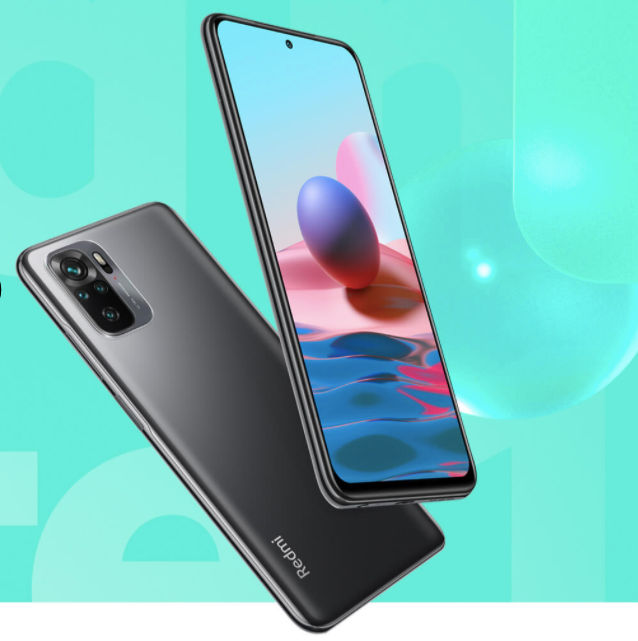 The Redmi Note 10 specifications are as follows: MIUI 12 with Android 11, 5,000mAh battery, and 33W fast charging support. The handset sports a 6.43-inch FHD+ AMOLED panel with a standard 60Hz refresh rate and centred punch-hole for the selfie camera. The phone also features Corning Gorilla Glass 3. At its core lies, Snapdragon 678 chipset coupled with up to 6GB RAM and 128GB user-expandable storage.

For photography, the Redmi Note 10 employs a quad-camera system, which consists of a 48MP Sony IMX582 primary sensor, an 8MP ultra-wide sensor, and a couple of 2MP snappers for macro and depth shots. At the front, the phone ships with a 13MP snapper for selfies and video calling. Other features include a 360-degree ambient light sensor, 3.5mm headphone jack, IR blaster, self-cleaning speakers, 4G LTE, Wi-Fi, 3.5mm headphone jack, and Bluetooth 5.0.

The Redmi Note 10 justifies its price tag with an FHD+ AMOLED screen, better cameras, and a faster-charging solution compared to the Galaxy M12, at least on paper. The Samsung Galaxy M12, on the other hand, is cheaper than the Redmi smartphone. Additionally, the handset also offers a higher screen refresh rate and a bigger battery. We can only tell how good these phones actually after reviewing them, so stay tuned for more.