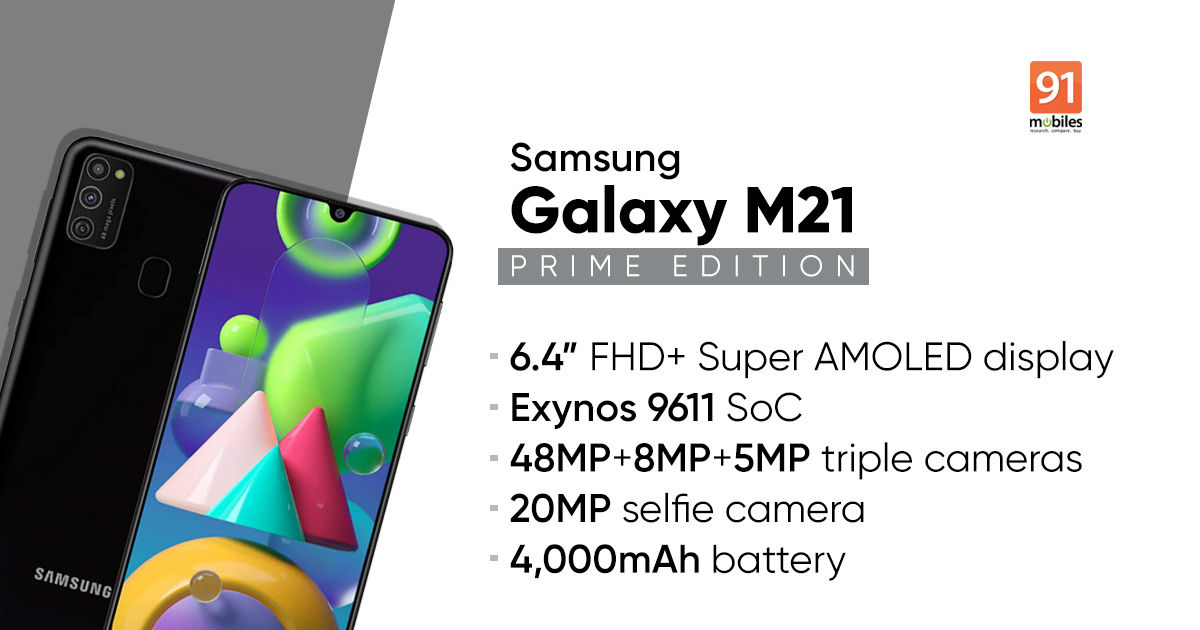 The Galaxy M21 Prime Edition moniker was spotted on Google Play Supported Devices, confirming the existence of the device. Moreover, a Samsung smartphone with model number SM-M215G/DS was spotted on the Bureau of Indian Standards (BIS) certification platform. This device is expected to be the Galaxy M21 Prime Edition that was spotted on Google’s platform. The support page for the same model number has also gone live on Samsung India’s official website, which confirms that the phone exists and that it will launch in India.

The Samsung Galaxy M21 features a 6.4-inch Super AMOLED display with a full-HD+ resolution, 60Hz refresh rate, and Corning Gorilla Glass 3 protection. The phone has three rear cameras, a 48MP primary sensor, an 8MP ultrawide camera, and a 5MP sensor. The selfies are taken care of by a 20MP camera. The device also has a rear-mounted fingerprint scanner.

Powering the Galaxy M21 is the Exynos 9611 SoC. The phone runs on the Android 11 OS with One UI 3.1 Core custom skin. The device is available in 4GB+64GB and 6GB+128GB configurations. The handset packs a 4,000mAh battery with 15W charging. Connectivity options include Wi-Fi ac, Bluetooth v5.0, a USB Type-C port, and a 3.5mm audio jack. The Samsung Galaxy M21 Prime Edition has been spotted on Google Play Supported Devices, BIS, and Samsung India website, suggesting an imminent India launch.

While we wait for the Samsung Galaxy M21 Prime Edition, you can check out more news about the upcoming smartphones as well as popular product recommendations on our Facebook, Twitter, and Instagram pages and head to our YouTube channel for the latest videos.
ShareTweetShare
Share