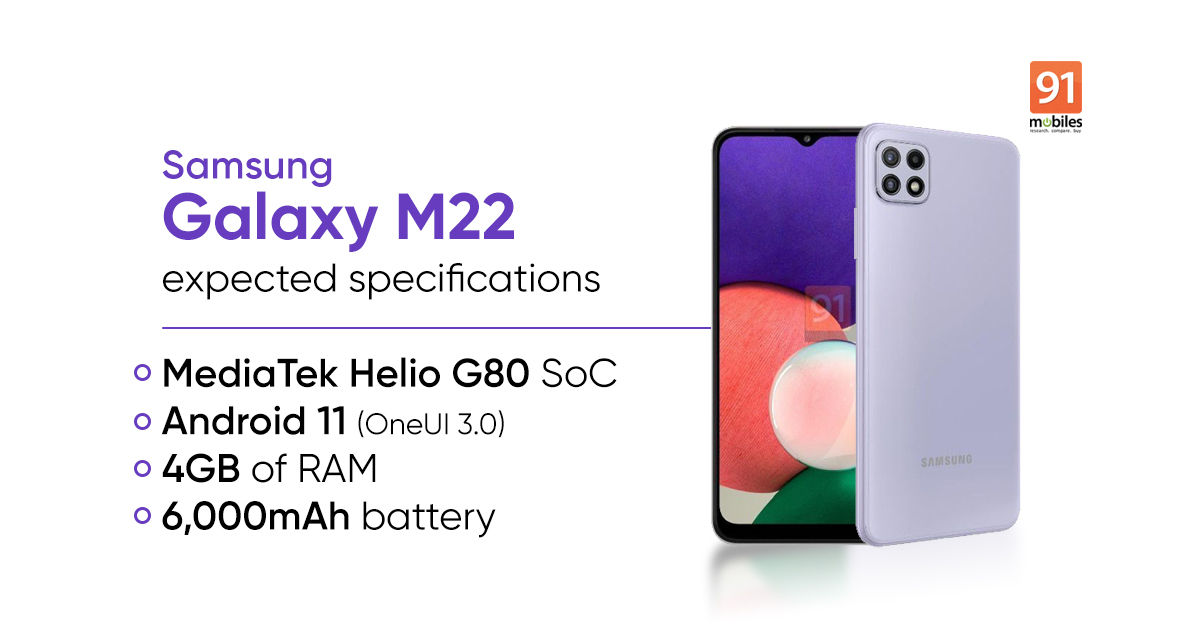 Samsung Galaxy M22 has appeared on the FCC certification website with the model number SM-M225FV, suggesting the launch could be close. This comes just a day after the brand had introduced the Galaxy M32 in the country. The FCC certification, as spotted by MySmartPrice, has revealed some key details of the phone, including the 25W (9V, 2.77A) fast-charging support but is likely to come with only a 15W (9V, 1.67A) charger in the box. Furthermore, the phone will come with 4G LTE, dual-band Wi-Fi, and NFC connectivity While that’s pretty much everything that is revealed from the FCC documents, the Samsung Galaxy M22 had earlier appeared on the Geekbench with some key specifications.

The Samsung Galaxy M22 is said to come with MediaTek Helio G80 SoC paired with 4GB of RAM, but there could be other models at launch. The phone is likely to run Android 11 out of the box, which should be skinned with OneUI 3.0 custom skin on top. While there’s no leak about the battery capacity, we can speculate it could have at least 6,000mAh battery capacity. The phone has managed to score 374 points in the single-core round and 1,361 in the multi-core section. That’s pretty much everything we so far know about the Galaxy M22 but we should learn more details going forward.

To recall, the Samsung Galaxy M21 sports a 6.4-inch FHD+ Super AMOLED display with a 60Hz refresh rate and a waterdrop notch for the selfie snapper. It is powered by the Exynos 9611 10nm processor with Mali G72MP3 GPU, up to 6GB RAM, and 128GB UFS 2.1 storage. The phone runs on Android 10-based OneUI 2.0 custom skin out of the box. Moving to optics, the Galaxy M21 has triple cameras, with a 48MP primary sensor, 8MP ultra-wide-angle lens, and a 5MP depth sensor. It has a 20MP snapper on the front for selfies and video chats. Connectivity features Dual 4G VoLTE, Wi-Fi 802.11 ac (2.4GHz + 5GHz), Bluetooth 5, GPS + GLONASS, and USB Type-C. The phone packs a 6,000mAh battery and supports 15W charging.