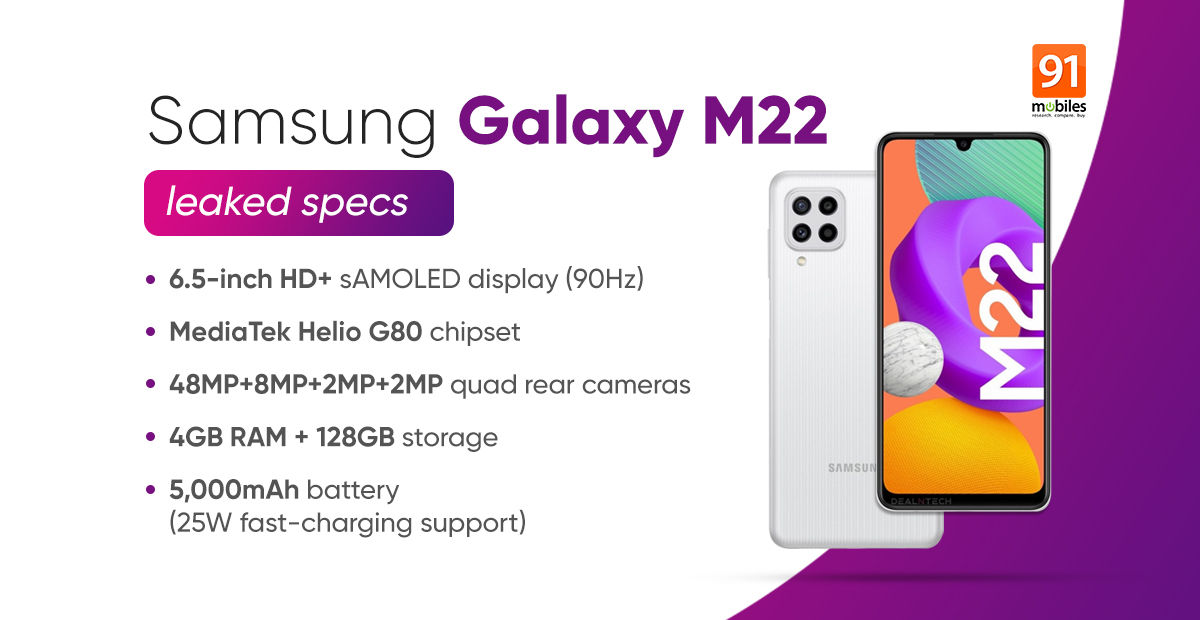 Samsung Galaxy M22 specifications and official-looking renders have leaked ahead of the phone’s official unveiling. While the handset has been spotted on Geekbench and certification websites earlier, this new leak from DealINTech leaves little to the imagination. As far as the design is concerned, you will be hard-pressed to search for differences when you compare Galaxy M22 design with that of the Galaxy A22. As you can see in the image (above), the Galaxy M22 will feature a waterdrop notch design (Infinity-V) on its display. The volume rocker and the power button, which will likely have a fingerprint sensor embedded, can be seen on the right side of the device.

Moving on to the Samsung Galaxy M22 leaked specifications, the upcoming mid-ranger from the brand has been tipped to be powered by MediaTek Helio G80 chipset, paired with 4GB of RAM and 128GB of built-in storage. The publication says that it is unclear if there will be other configurations available for the phone as well. As far as the display is concerned, the Galaxy M22 will reportedly pack a 6.5-inch HD+ (1600×720 pixels) Super AMOLED panel with a 90Hz refresh rate.

In the optics department, the handset will come with a quad-camera setup at the back, comprising a 48MP primary sensor (wide), an 8MP ultrawide sensor, a 2MP macro sensor, and a 2MP depth sensor. At the front, you will get a 13MP sensor for clicking selfies or video calls. The Galaxy M22 has been tipped to house a 5,000mAh battery with 25W fast-charging support. The report says that the phone will measure 159.3x74x8.4mm and will weigh around 199 grams. Talking about the connectivity options, you will get GPS, 4G LTE, Wi-Fi, NFC, Bluetooth 5.0, FM radio, dual-SIM (nano), and a 3.5mm headphone jack as well.