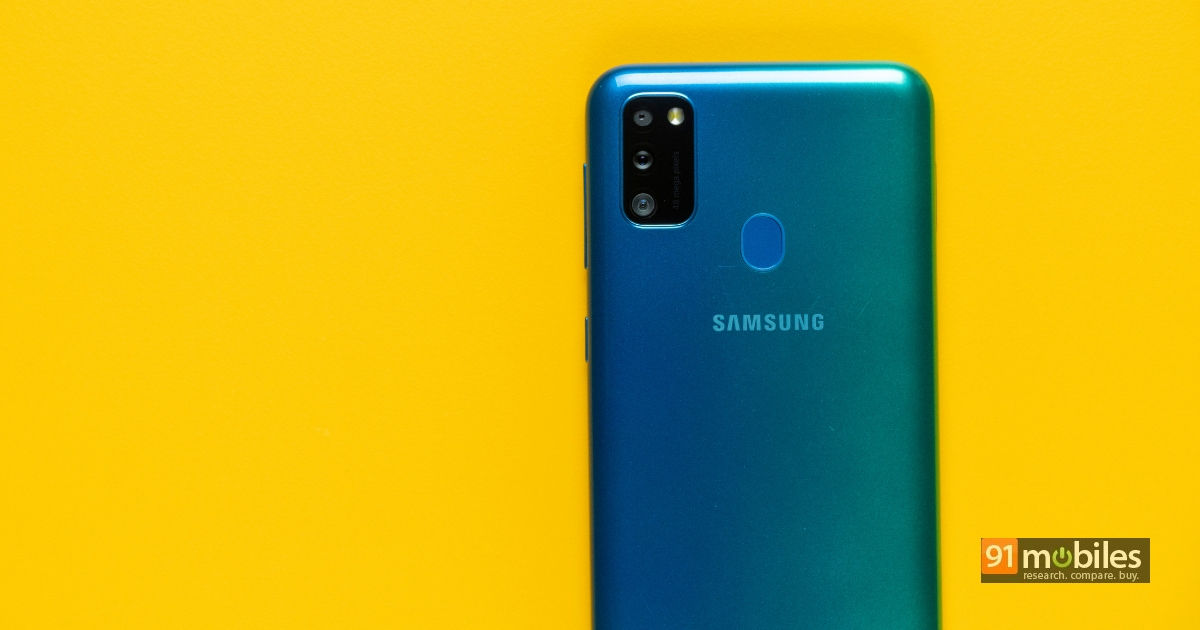 The Galaxy M series is Samsung’s answer to the onslaught of competition from Chinese rivals in the affordable smartphone space in India. While the going hasn’t been easy, it’d suffice to say that Samsung’s aggressive approach this year seems to be a step in the right direction, judging by the largely positive response the M series models have received. The latest salvo comes in the form of the Galaxy M30s, which is an iterative upgrade to the M30 (review) which was launched earlier this year. Let’s get up close and see what the new device brings to the table. Inside the box, you won’t find anything else except a Type-C cable and a wall charger. Oh, there’s a SIM eject pin and some documentation too. With that grand unboxing out of the way, let’s move on to the device. 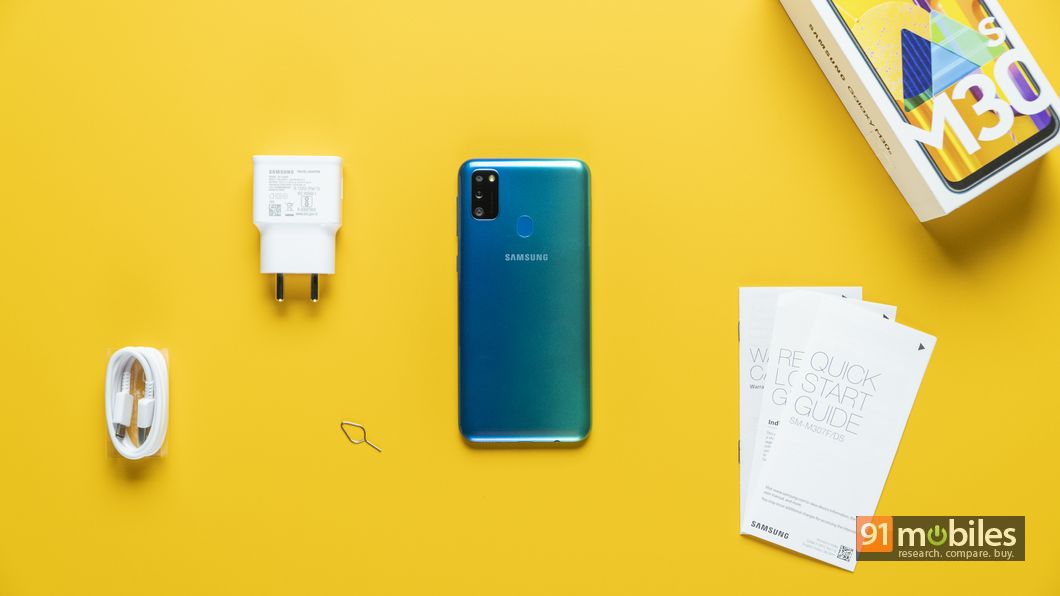 Overall, the Galaxy M30s uses the same design philosophy as its spiritual predecessor, the M30. So you get the same 6.4-inch display with a U-shaped waterdrop notch, a curvy polycarbonate body, and an oval fingerprint scanner at the rear. Our review unit comes in Sapphire Blue, which features a gradient finish that merges into green on the right side of the rear panel. The phone looks decent enough, but might not stand out in a sea of similar looking options, all featuring gradient finishes and vivid colours. On the positive side, the build quality seems solid. The Super AMOLED display with FHD+ resolutions looks quite capable, and the fingerprint scanner should work as advertised. You also get a face unlock option, so you might not need to use the fingerprint scanner at all. 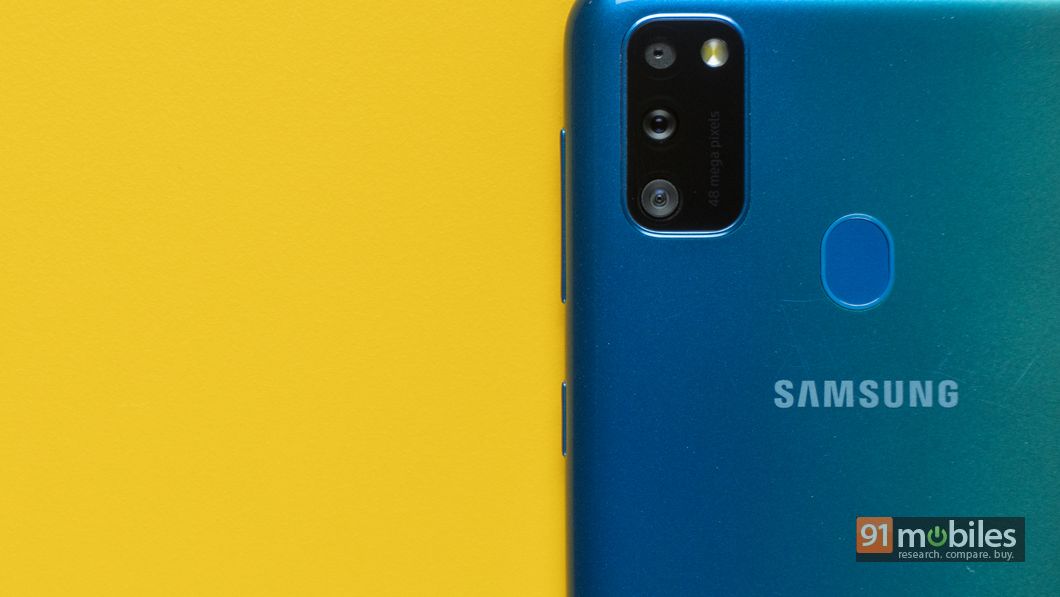 There’s a noticeable black border around the display and a thickish chin. You’ll find a tiny slit of an earpiece above the waterdrop notch. One of the biggest design highlights is the triple camera setup, which is placed in a wide rectangular module on the top left of the phone’s back panel. In a crude way, it reminds one of the cameras on the new iPhone 11 Pro models that Apple recently unveiled, and those on the upcoming Pixel 4 smartphones too. The similarities are fleeting, but there’s no mistaking it when you take a closer look. The placement of ports and controls is fairly typical, and includes the volume rocker and power key on the right, Type-C port, speaker and 3.5mm jack on the bottom, and SIM tray on the left.

The mainstays of the Galaxy M30s have to be its cameras and beefy battery, with both aspects representing significant upgrades as compared to the previous model. The processor has been bumped up as well, and the phone utilises the Exynos 9611 chipset which is newer and faster than the Exynos 7904 found inside the M30. The chipset is mated to 4/6GB of RAM, and depending upon the RAM variant you choose, you get either 64 or 128GB of storage. For shooting, the triple camera setup on the M30s includes a 48MP primary camera, which is a feature fast becoming common in smartphones spanning different price bands. Apart from that, you also get a 5MP depth sensor and an 8-meg ultra-wide sensor with a 123-degree field of view. On the front, there’s a 16MP selfie shooter. The cameras come laden with various features like an Ai-powered scene optimizer, flaw detection, a dedicated night mode and support for shooting Super Slo-Mo videos and 4K footage as well. The specs look good on paper, and a few test shots we took do look promising, but as usual, we’d like to reserve our verdict for the full review. Based on our brief stint, the performance seems smooth as well, and we didn’t any encounter any jitter or lag.

The other big pillar the Galaxy M30s stands on is the battery. While battery capacities ranging from 3,500mAh to 4,500mAh are common, the M30s ups the ante with a whopping 6,000mAh battery. Mind you, the phone isn’t really bulky, so it’s surprising Samsung has been able to cram a high-capacity battery inside. Needless to say, we’re expecting stupendous battery life on the M30s and we’re sure our tests will corroborate that. Software-wise, there’s the standard OneIU running atop Android Pie, with the usual assortment of apps from Google, Samsung and Microsoft. 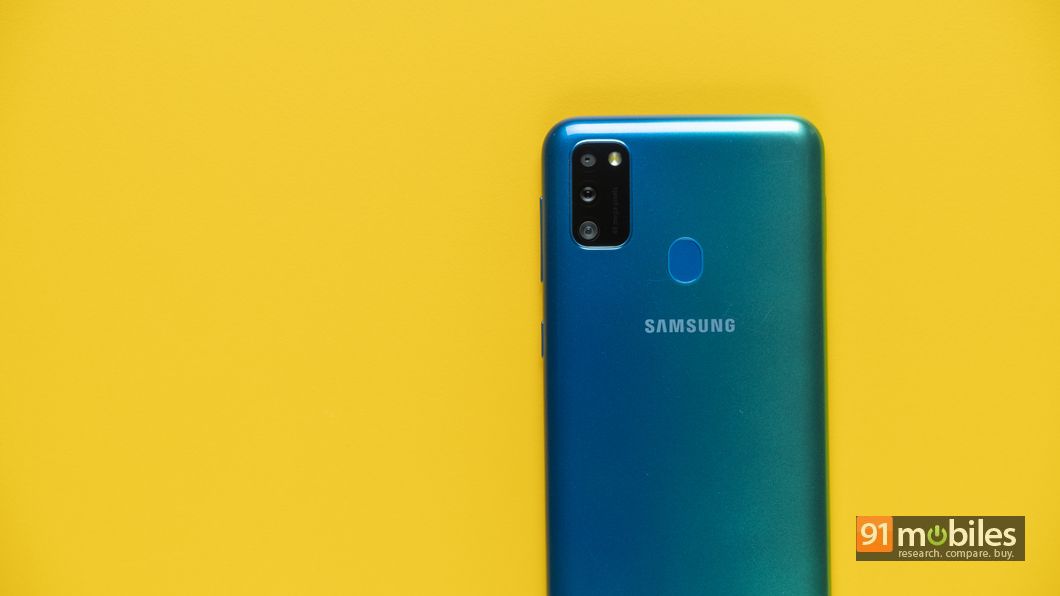 Priced at Rs 13,999 for the base variant and Rs 16,999 for the higher one, the Samsung Galaxy M30s seems like a compelling option for sure. That said, the competition is hard to ignore, and the Korean giant is bound to face stiff rivalry from the other contebnders on this segment… devices that include the likes of the Realme 5 Pro (review) and the Vivo Z1 Pro (review) on the lower end of the spectrum and the Realme XT (first impressions) and the Vivo Z1x (review) on the upper end. The one aspect where the Galaxy M30s stands out is its 6,000mAh battery, and while we hope that the device can match up in crucial areas like performance and shooting prowess, the promise of better battery life as compared to its rivals should help its cause quite a bit.