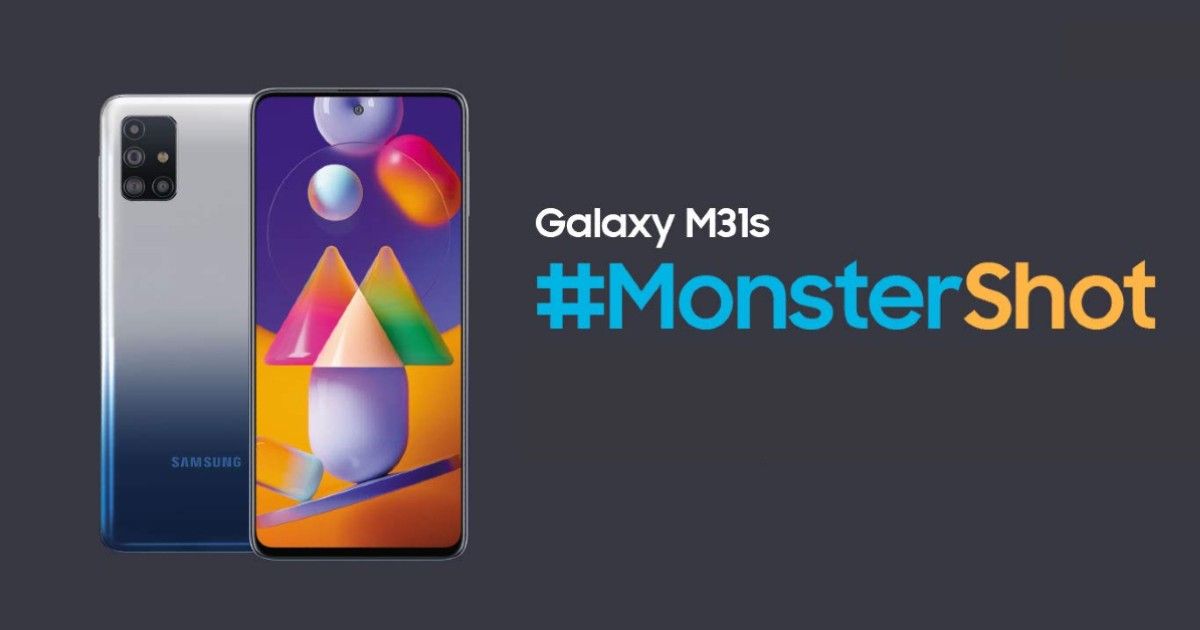 Let’s start with the upgrades! The Samsung Galaxy M31s will be the first smartphone in the lineup to ship with Infinity-O display, which offers a slightly higher screen-to-body ratio compared to Infinity-U/ Infinity-V panels with a slight notch atop. Its predecessor Samsung Galaxy M31, to recall, sports a 6.4-inch Infinity-U display of sAMOLED variety with FHD+ resolution and 83.92 percent screen-to-body ratio. The Samsung Galaxy M31s may exceed that ratio to offer an “immersive viewing experience with minimal interruption.” The handset will also bear FHD+ resolution and a sAMOLED panel. There is no word on the refresh rate yet, but it’ll be nice to see 90Hz screen as part of the package.

Besides the display, the Samsung Galaxy M31s is said to feature improved cameras. The handset will sport a quad-camera setup at the back, with 64MP ‘Intelli-Cam’ and Single Take feature that’ll allow users to capture multiple photos and videos with just one take. Additionally, the phone will pack a gargantuan 6,000mAh battery, which will be backed by 25W fast charging tech. The tech will ensure that the battery recharges faster than the M31’s 15W charging support. The Samsung Galaxy M31s will also offer reverse charging feature, which could definitely be useful with such a massive cell. The phone will come in at least While-Blue gradient colour.

If an alleged Geekbench listing is anything to go by, the next-gen Samsung Galaxy M31s with model number SM-M317F will also be powered by 2.3GHz octa-core Exynos 9611 SoC coupled with 6GB of RAM (there could be an 8GB RAM variant as well). It’s been Samsung’s go-to chipset for a handful of Galaxy M series and A series smartphones in the past. Software-wise, the handset would boot One UI 2.0 atop Android 10 out of the box. The phone will rock quad rear cameras with 64MP primary sensor – much like its predecessor. That’s all the information we can divulge at the moment. The Samsung Galaxy M31s other specifications such as the chipset, screen size, and storage options remain unknown at the moment.

The Samsung Galaxy M31s price in India will be around Rs 20,000, according to a report by IANS. If that’s so, it’ll be the most expensive Galaxy M3x series smartphone yet. The phone’s predecessor Samsung Galaxy M31, to recall, is retailing at Rs 17,499 for the 6GB RAM option, while the 8GB RAM option costs Rs 20,499.