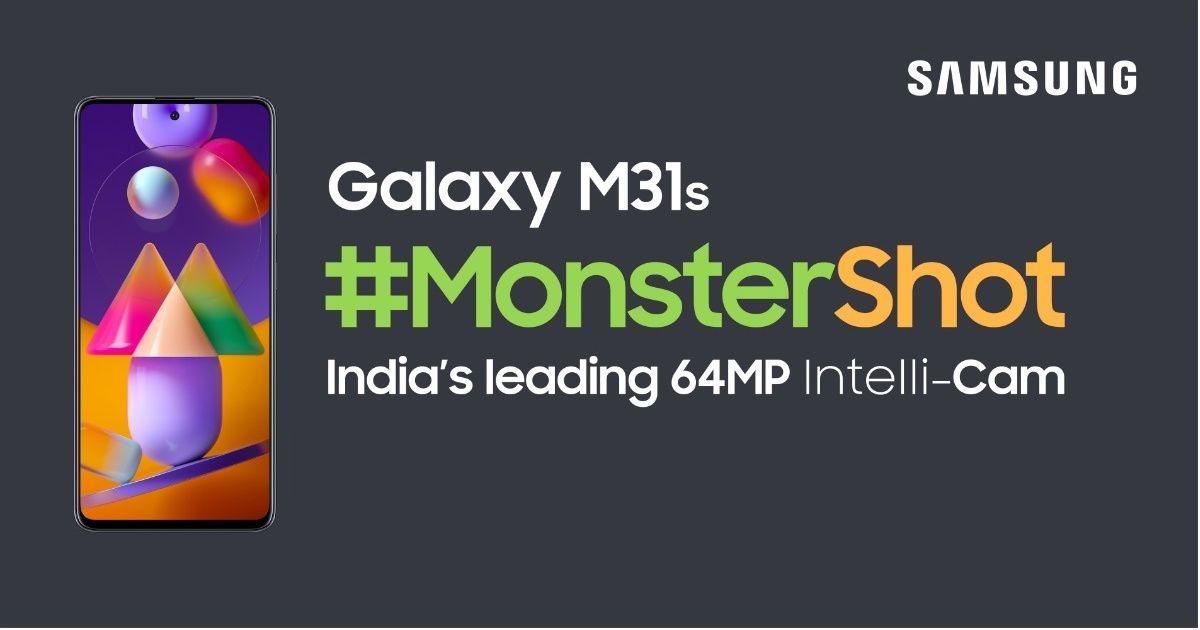 Samsung made a big splash in the Indian market last year with the launch of the affordable Galaxy M30 smartphone series. The three models in the series – Galaxy M30, M30s, and M31 – have raised the bar for value-for-money smartphones with features such a huge battery, high-resolution quad rear cameras, amazing selfies, large sAMOLED display, and so much more. Now, the company has taken the value proposition several notches higher with the launch of Samsung Galaxy M31s, the next-generation model in the series that will has upped the benchmark for the segment once again.

The new camera-centric features of Samsung Galaxy M31s are centred around India’s leading 64MP Intelli-cam. The key addition to the feature list on the Galaxy M31s is the arrival of the revolutionary Single Take feature, which has been limited to the flagship Samsung Galaxy S lineup and the premium mid-range Galaxy A series so far. And that’s not all. The new Galaxy M31s comes armed with a host of other features too, including support for super-quick 25W fast charging for the monster battery. 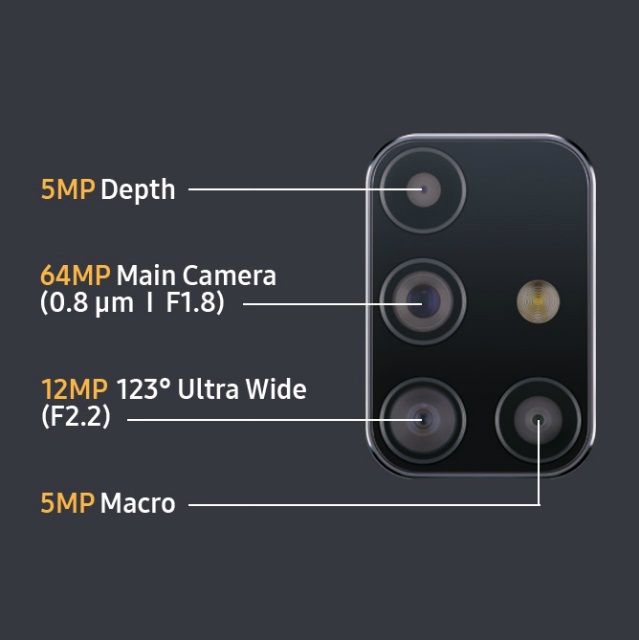 There is no denying that Samsung Galaxy M series smartphones are well known for their class-leading camera capabilities. The new Galaxy M31s is no exception and takes things a notch higher with India’s leading 64MP Intelli-cam. For the first time in the history of M series, Samsung has used the Sony IMX682 sensor on the Galaxy M31s. This 64MP Sony IMX682 sensor has f/1.8 aperture that allows more light to enter, leading to brighter images even under lowlight conditions. It’s backed by a 12MP ultra-wide-angle lens with 123-degree field of view, the same as that of the human eye – this means the camera can capture every single thing you can see and won’t lose out on any of the scene in ultra-wide-angle mode. These sensors are supplemented by a 5MP macro unit – that can capture extremely close-up images without missing out on the details – and a 5MP depth sensor for the perfect portrait shots.

The 64MP sensor used on the new Galaxy M31s not only promises detailed, high-quality images but lets you explore other aspects that were once considered outside the realm of mobile photography. Take, for example, the magical Single Take feature – it simplifies the entire process of capturing a moment from different perspectives and lets you relive that same moment in many completely different ways.

Till now, you have been stuck with just a single shot or video of a particular moment – which may not capture the full situation and miss out on some parts. With Single Take, you will get as many as seven photos and three videos of the same scene, completely nullifying the chances of a missed shot. This feature basically records the entire moment uses its powerful AI to automatically transform the single clip into multiple perspectives of the same moment. 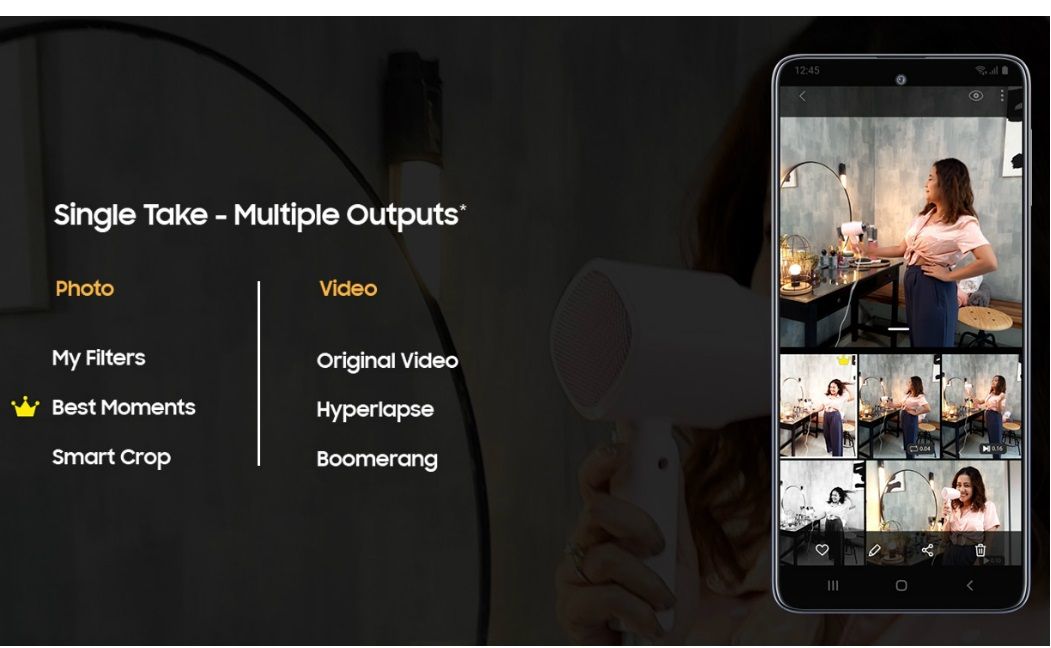 For example, you can use the feature during a cake-cutting ceremony at a birthday party. Once recorded, the 64MP Intelli-cam of Galaxy M31s generates as many as seven different images and three separate videos from that single shot. There will be a variety in terms of the seven different photos and three videos as well. In the case of the three video outputs, you get a Hyperlapse clip, a Boomerang clip, and an unedited clip that captures the entire moment as is. In the case of images, you will be presented with seven different takes involving Best Moments, Filters, and Smart Crop. 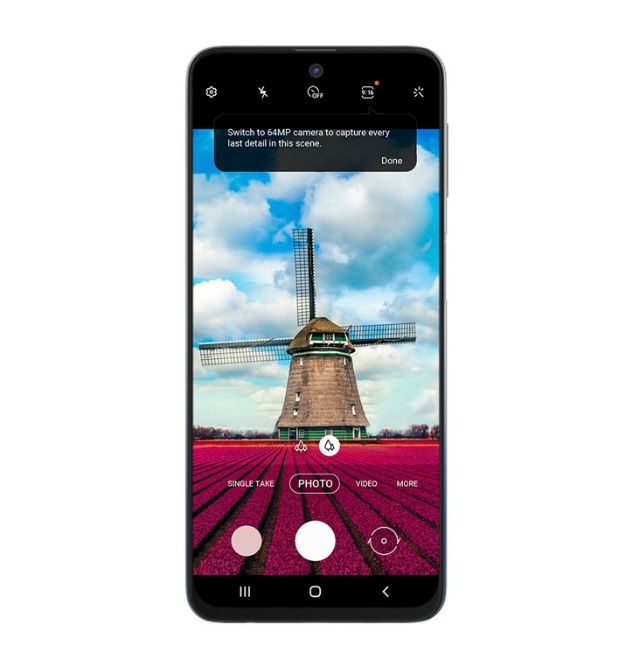 But Single Take is just one of the many Intelli-cam features of Samsung Galaxy M31s. Depending on the scene, Intelli-cam can suggest the best resolution to capture images and can automatically switches to wide-angle mode when it detects more than one person in the frame while you take a selfie. And if you love a particular scene, you can make it a custom filter on your phone and give other photos the same tint and look that you love. Intelli-cam lets you save as many as 99 such custom filters so you’ll never run out of options while giving a personal touch to your photos. Intelli-cam even gives you the option to switch between the front and rear cameras while shooting videos so you can shoot the scene and your reaction to it, at the same time.

What makes Single Take on Samsung Galaxy M31s truly special is the fact that it can even be used with the 32MP front-facing camera. The Samsung Galaxy M31s is as capable a photography tool as it is a videographer’s delight. Thanks to support for 4K video recording, you can be assured of capturing memorable videos in vivid details on the phone.

With its comprehensive set of camera features and the formidable capabilities the 64MP Intelli-cam brings to the table, the new Samsung Galaxy M31s has become the benchmark for all future budget smartphones in India. 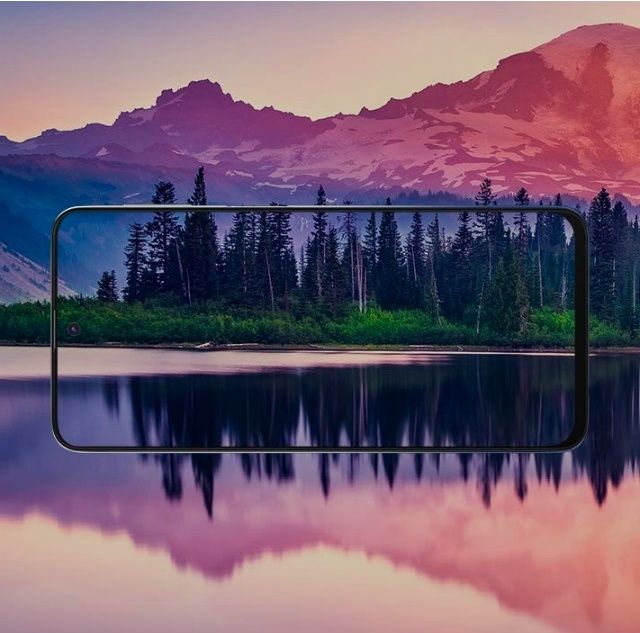 While we can continue talking about the 64MP Intelli-cam all day, Samsung Galaxy M31s has a lot of other features that are just as compelling. Topping the list of Galaxy M31s specifications is the massive 16.4cm (6.4-inch) FHD+ Super AMOLED display that the phone comes with. Thanks to the expertise Samsung has in manufacturing world-class AMOLED panels, we know for sure that the display experience you get on Galaxy M31s is unmatched in the segment.

Watch content come to life in rich colours and amazing saturation with the gorgeous sAMOLED panel on the Galaxy M31s. The large, vibrant, and brilliant display of the phone makes it the perfect device to consume content. Thanks to the small Infinity-O, punch-hole, you are also assured of a distraction-free content consumption experience at all times. 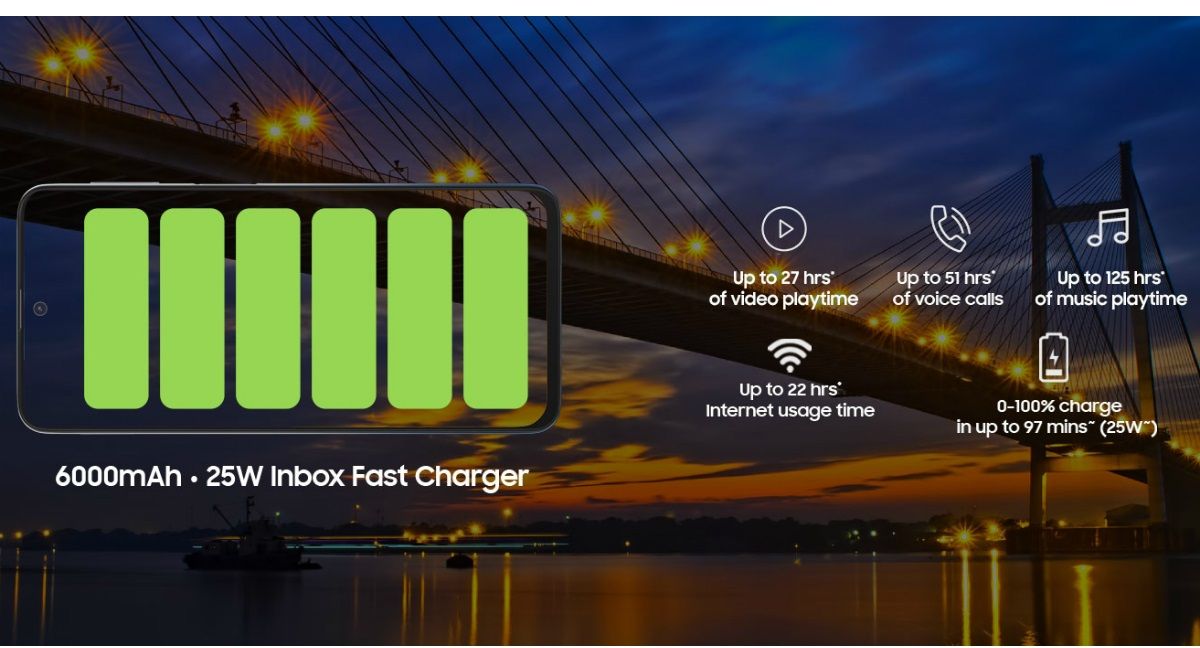 With its massive 6000mAh battery, Samsung Galaxy M31s promises the best battery life in its price segment. In fact, there are not many Android smartphones out there that can come close to the battery life offered by this phone. What makes the feature even more remarkable is the fact that the large battery now features support for the uber-fast 25W fast charging by Samsung. This ensures that you can charge the Galaxy M31s real quick whenever it runs out of juice – it takes just 97 minutes for the smartphone to go from 0 to 100 percent! Then there is the reverse charging feature that will transform the Galaxy M31s into a power bank.

And the numbers speak for themselves: the Samsung Galaxy M31s can video playback time of up to 27 hours, internet browsing time of up to 22 hours, and as much as 51 hours of voice calls, so you are always connected to your loved ones.

Hardware that’s made to power your lifestyle

Powering the Samsung Galaxy M31s is the 2.3GHz octa-core Exynos 9611 chipset, while the Mali-G72 MP3 GPU takes care of the graphics. This combination, along with the super-fast LPDDR4 RAM onboard, ensures you never face any hiccups while playing games, switching between your favourite apps, etc. With as much as 8GB RAM and 128GB inbuilt storage, the Samsung Galaxy M31s packs a punch that’s more than enough to take you through the day without even a hint of lag.

The list of noteworthy features on Galaxy M31s doesn’t end here though. Whether it’s the side-mounted fingerprint sensor, the Android 10-based OneUI 2.0, the USB Type-C port, the 3.5mm audio jack, the new Samsung smartphone has a lot to offer to everyone. And all of these fit inside a body that’s just 9.3mm in thickness! That’s just crazy.

Samsung Galaxy M31s with the 64MP Intelli-cam, Single Take mode, and 25W charging is now up for sale in India via Amazon.in. Thanks to its comprehensive list of class-leading features, the Galaxy M31s makes for a great choice if you are on the lookout for a new budget smartphone. The base variant with 6GB RAM and 128GB storage goes for Rs 19,499, while the 8GB RAM + 128GB configuration is priced at Rs 21,499. So head to Amazon.in now and purchase the smartphone that has set the affordable segment on fire!