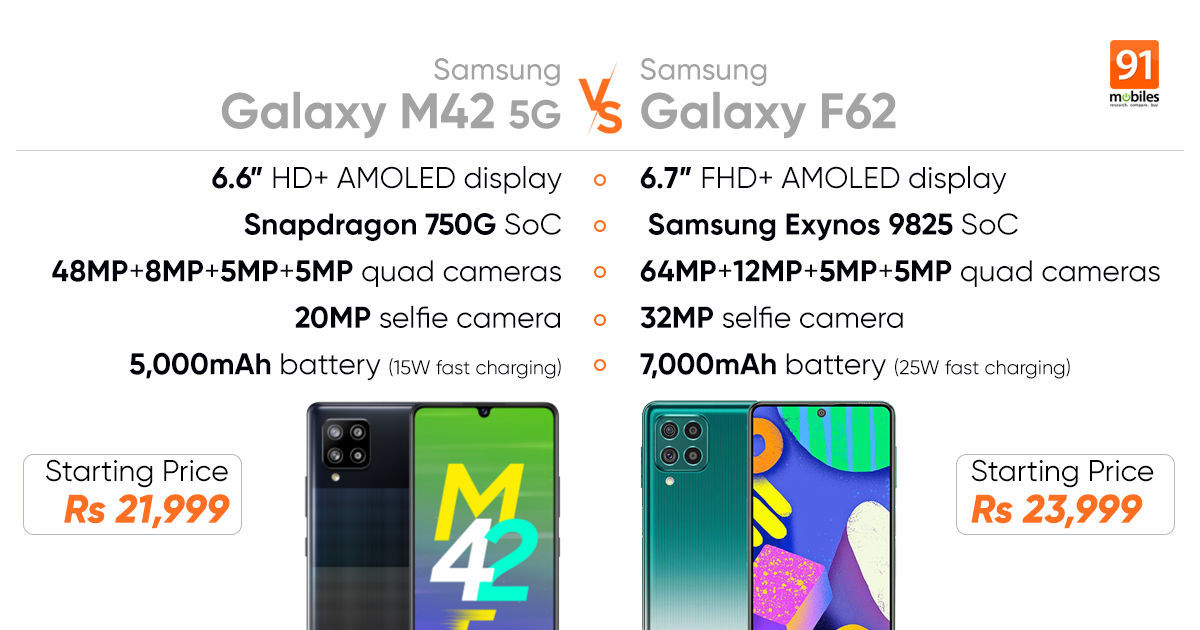 The Samsung Galaxy M42 5G smartphone has been officially launched in India. The phone is essentially a rebranded Galaxy A42 5G, hence features a similar design and hardware. The phone comes with a square-shaped rear camera module, an in-display fingerprint scanner, an AMOLED display, and a 5,000mAh battery. Samsung Galaxy M42 5G price in India is Rs 21,999, which means it falls in the same segment as the Galaxy F62. Hence, we thought it’d be a good idea to compare the prices and the specifications of the two Samsung devices.

On the other hand, the Samsung Galaxy F62 can be purchased at a starting price of Rs 23,999 with discounts. This is the base variant and it comes with 6GB RAM and 128GB storage. Pay another Rs 2,000 extra and you’ll get the 8GB RAM variant for Rs 25,999. That puts it in a similar price bracket as the newly launched Galaxy M42 5G. Yes, you do pay Rs 2,000 more, but you also get better features.

In terms of design and display, both the Galaxy devices look very similar, albeit with some changes here and there. For example, the Galaxy M42 5G comes with a waterdrop notch and features a different pattern on its rear panel. Meanwhile, the Galaxy F62 gets a hole-punch camera cutout. Both phones have a very similar-looking square rear camera module, with four camera sensors with an LED flash placed below. If it weren’t for the different rear panel patterns, you wouldn’t be able to tell the difference. 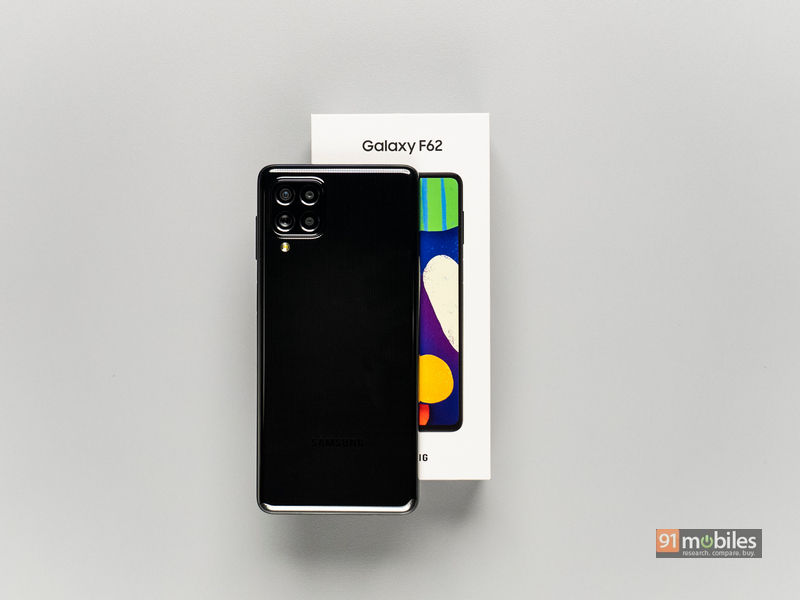 Moving to the displays, there are some differences here. The Galaxy M42 5G has an HD+ resolution 6.6-inch Super AMOLED display. The Galaxy F62 features a slightly larger 6.7-inch AMOLED Plus panel and offers a sharper FHD+ resolution, with a punch-hole camera. Both smartphones feature an in-display fingerprint scanner.

Coming to the hardware, the newly launched Galaxy M42 5G is future-proof as it offers 5G connectivity thanks to the Snapdragon 750G chipset. It is paired with up to 8GB RAM and 128GB storage, which can be expanded via a microSD card slot. The Galaxy F62 doesn’t offer 5G and uses a Samsung-made Exynos 9825 processor, which is coupled with 8GB RAM and 128GB storage. Again, a microSD card slot is provided for storage expansion.

You may think that the Galaxy M42 5G is therefore a better phone, but the F62 has some tricks up its sleeve. For example, you get a much larger 7,000mAh battery on the Galaxy F62, compared to the 5,000mAh unit on the M42. It also supports 25W fast charging, whereas the M42 maxes out at 15W. Even the rear camera setup on the F62 is superior thanks to a 64MP main camera, 12MP ultra-wide, and two 5MP sensors for macro and depth.

The Galaxy M42 comes with a 48MP primary sensor at the back along with an 8MP ultra-wide, and dual 5MP sensors for depth and macro. The selfie camera on the F62 is a 32-megapixel unit, compared to the 20MP provided on the Galaxy M42.

As you can read from the above comparison, the Galaxy F62, although Rs 2,000 more expensive than the Galaxy M42 5G, seems like a better value for money offering. It offers a better display, higher resolution rear and front cameras, a much larger battery, and a decent mid-range processor. However, if you are looking for an affordable 5G Samsung phone, then the Galaxy M42 5G is the default option. It also comes with a capable Snapdragon 750G chipset.