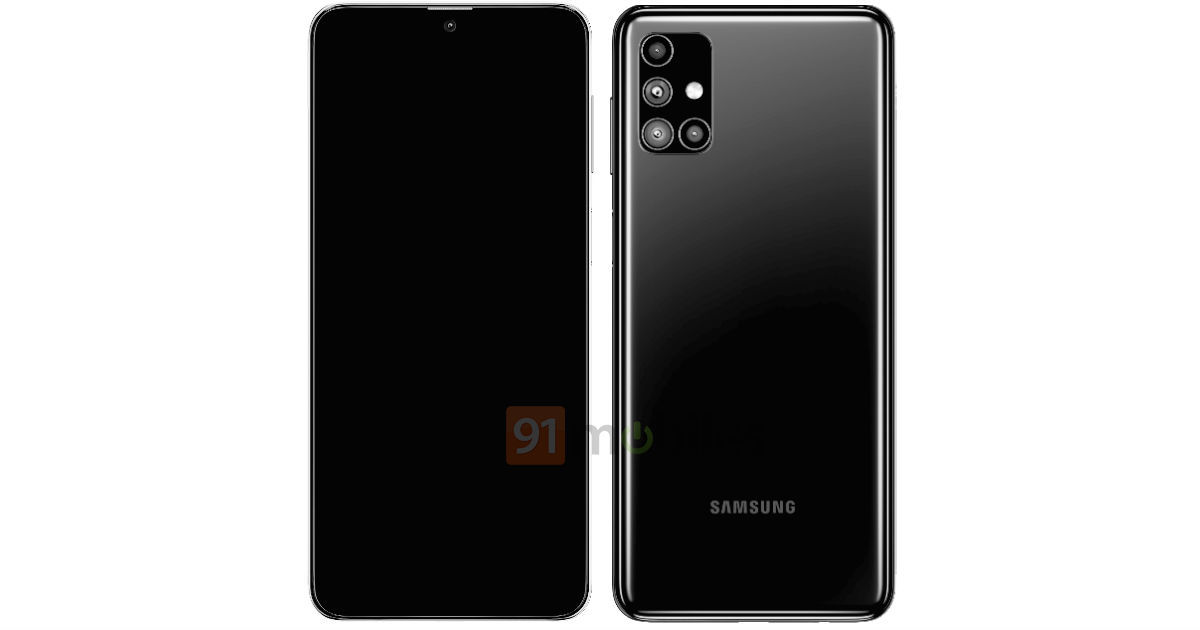 Samsung Galaxy M51 is a highly anticipated smartphone that is rumoured to launch in India in the second week of September. Now, ahead of the India launch, 91mobiles has acquired official Galaxy M51 renders from industry sources. This confirms the design of the upcoming mid-range Samsung smartphone. It also keeps in line with a recent leak that showed off the design of the handset. The Samsung Galaxy M51 will indeed launch with a punch-hole display and a quad-camera setup in a rectangular module. The Samsung Galaxy M51 price in India could fall in between Rs 25,000-Rs 30,000. The phone is expected to launch early next month and will go on sale in the country in mid-September.

The Samsung Galaxy M51 looks similar to the Galaxy M31s that was launched in India a little while ago. As seen from the images, the handset will have an all-display fascia with a center earpiece grill and a punch-hole for the selfie camera atop. Rumours suggest that the phone will flaunt a 6.67-inch Super AMOLED full-HD+ display and a standard 60Hz refresh rate. The rear panel of the Samsung Galaxy M51 seems to have a glass layer with curved edges and an L-shaped quad camera setup in a rectangular camera module in the top left corner.

The right spine of the phone features a volume rocker and a power button that’s also said to be home to the fingerprint scanner. The handset’s bottom edge is not visible, but you can see the cut outs for charging port and 3.5mm headphone jack. Going by the previous leaks, the left edge of the Samsung Galaxy M51 will feature SIM tray, and apart from the black colour option you see in the renders, the handset is expected tipped to come in a white hue.

As for the rumoured Samsung Galaxy M51 specifications, the phone could be powered by Snapdragon 730G SoC. The handset is said to house a massive 7,000mAh battery and should support 25W fast charging. In the camera department, the device may feature 64MP (f/1.8) primary camera coupled with a 12MP ultra-wide-angle lens, a 5MP depth sensor, and a 5MP macro lens at the back. Up front, it could sport a 32MP snapper for selfies and video calling. Additionally, the phone will reportedly measure 163 x 78 x 8.5mm and weigh 213 grams and come with connectivity options such as 4G LTE, dual SIM, and USB Type-C port for charging and data sync.