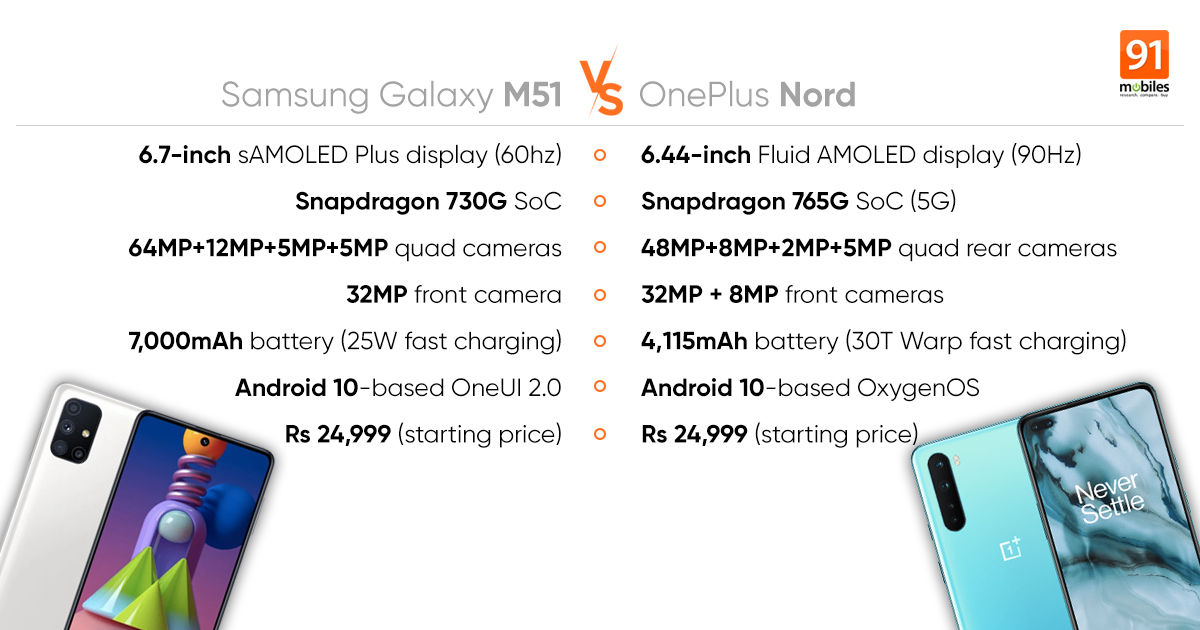 Samsung Galaxy M51 has launched in India via an online event today. It’s the most-ambitious Galaxy M-series smartphone from Samsung yet, packing a whopping 7,000mAh battery, 64MP quad cameras, sAMOLED Plus Infinity-O display, and Snapdragon 730G chipset. The handset is positioned in the sub-Rs 30,000 segment, which means it goes up against the OnePlus Nord (review). The OnePlus Nord is the most affordable smartphone from OnePlus in years and it touts a 5G-enabled Snapdragon 765G chipset, a 90Hz display, and dual selfie cameras. Here’s a quick look at how the Samsung Galaxy M51 and OnePlus Nord compare in terms of price and specifications.

The Samsung Galaxy M51 and OnePlus Nord come with similar prices, at least for the base variant. The 6GB RAM variants of the phones cost Rs 24,999. The difference is that the Galaxy M51 offers 128GB internal storage, whereas the OnePlus Nord offers only 64GB onboard storage. Meanwhile, the Samsung Galaxy M51 8GB + 128GB variant is priced at Rs 26,999. The handset comes in Electric Blue and Celestial Black colour options and will go on sale from September 18th onwards via Samsung’s e-store and Amazon.in.

The Oneplus Nord comes in 8GB RAM + 128GB and 12GB RAM + 256GB variants, priced at Rs 27,999 and Rs 29,999, respectively. The handset is available for sale on OnePlus.in, Reliance store, and Amazon.in in Blue Marble and Onyx Black colours. Notably, the base variant of the Rs 24,999 variant of the OnePlus Nord is yet to go on sale.

As far as the design goes, Samsung Galaxy M51 and OnePlus Nord both flaunt a punch-hole display and that’s where the similarities end. The Samsung smartphone has a centre-aligned cutout with a single selfie camera, whereas the OnePlus Nord sports an elongated cut-out in the top left corner for dual selfie cameras.

Around the back, the Samsung Galaxy M51 touts a polycarbonate panel with a quad-camera set up in a rectangular module. The phone features a side-mounted fingerprint scanner that doubles up as a power button. The OnePlus Nord, on the other hand, has a glass back with quad cameras vertically stacked and an in-display fingerprint sensor.

Coming to the specifications, the Samsung Galaxy M51 sports a 6.7-inch full-HD+ Super AMOLED+ Infinity-O display with a standard 60Hz refresh rate. The 4G handset is powered by the Snapdragon 730G chipset, which is coupled with up to 8GB RAM and 128GB storage that is further expandable via microSD up to 512GB. The device runs One UI 2.0 atop Android 10 OS out of the box.

The Samsung Galaxy M51 features a quad-camera setup, which comprises of a 64MP (f/1.8) primary sensor, a 12MP ultra-wide-angle lens with a 123-degrees field of view, a 5MP depth sensor, and a 5MP macro lens. The front camera of the phone packs a 32MP snapper. The handset houses a gigantic 7,000mAh battery with 25W fast charging support. Connectivity options include 4G LTE, dual SIM, and USB Type-C port for charging and data sync.

The OnePlus Nord, in contrast, has the Snapdragon 765G SoC ticking at its core, which is 5G-enabled. The handset has a slightly compact form factor compared to Galaxy M51 thanks to a smaller 6.4-inch AMOLED screen. The panel supports FHD+ resolution, in-display fingerprint scanner, and a 90Hz refresh rate for smoother scrolling and animations. The phone gets a 32MP + 8MP dual selfie camera setup.

The rear quad cameras of the OnePlus Nord packs a 48MP primary sensor as opposed to the 64MP sensor on the M51. Other sensors on the Nord include an 8MP (f/2.25) 119-degree ultra-wide lens, a 2MP (f/2.4) macro sensor, and 5MP (f/2.4) depth sensor. Software-wise, the phone runs Android 10-based OxygenOS out of the box. The handset is driven by a 4,115mAh battery with Warp Charge 30T fast charging support. In terms of connectivity, the OnePlus Nord rocks 5G, 4G LTE, Wi-Fi, Bluetooth 5.1, NFC, GPS/ GLONASS/ Galileo, and Type-C port.

Both the Samsung Galaxy M51 and OnePlus Nord deliver powerful specifications at around Rs 25,000. Both phones have certain features that look better than the other, at least on paper. The OnePlus Nord, for example, offers a high refresh rate screen, dual selfie cameras, faster charging, and a future-ready Snapdragon 765G chipset. The Samsung Galaxy M51, on the other hand, gets a massive battery, better quad-camera setup, and a bigger display. Stay tuned to our full review of the Samsung Galaxy M51 to know just how well the phone performs as a daily driver.