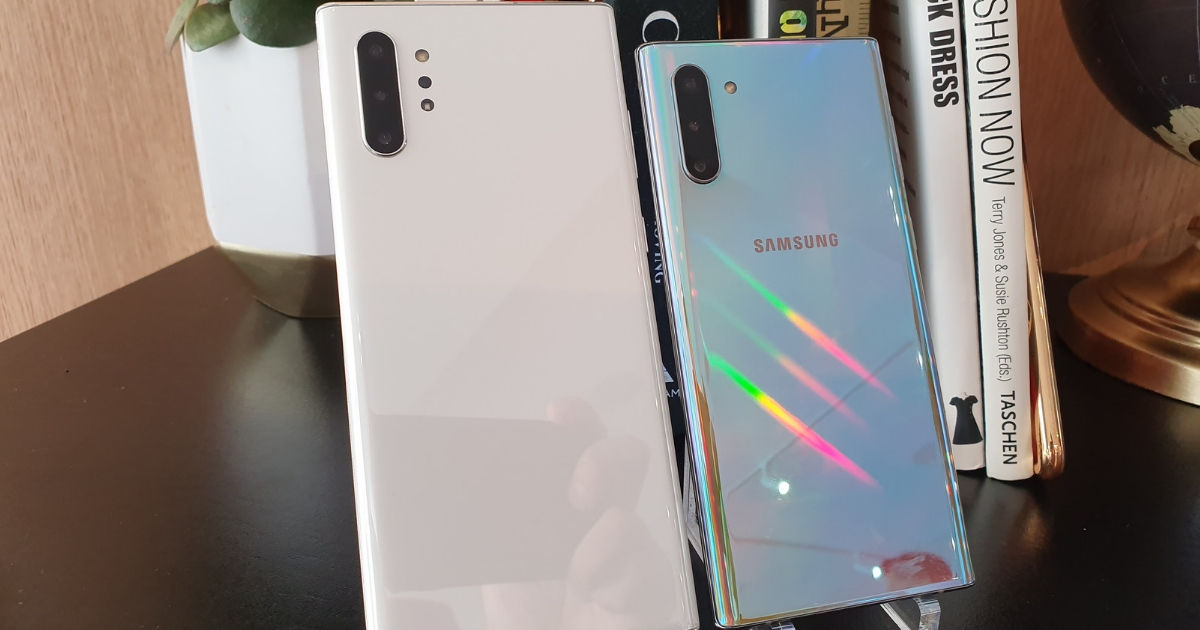 When Samsung took the covers off its first Galaxy Note back in 2011, the device was scorned at for being too big. Eight years later, phones with big displays are the norm, with phonemakers constantly pushing boundaries to offer higher screen-to-body ratios. That’s the reason why Samsung’s latest-gen Galaxy Note 10 and its sibling, the Note 10+, aren’t just relying on their large screen real estate to attract buyers. In fact, the duo is as loaded as a flagship could be, and if you’re looking to buy a top-notch handset, then you simply can’t ignore the Samsung Galaxy Note 10 and Note 10+. That’s a tall statement to make, but based on my brief time with the handsets, it certainly seems a valid one. So without further delay, read on to find out why I’m saying what I’m saying. 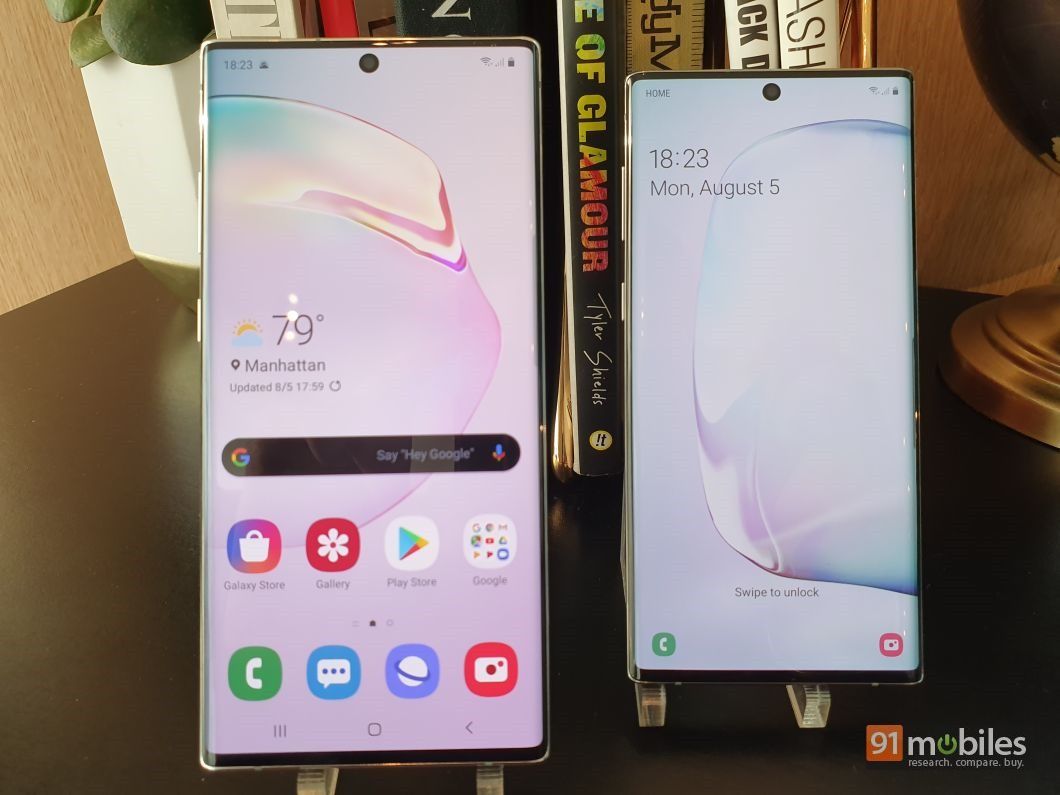 It’s worth noting (pun intended) that following the footsteps of the S series, the Note range has two models this time around – the Galaxy Note 10 and Note 10+. Interestingly enough, while you might expect the Note 10 to carry over the lineage of the Note 9 (review), that’s not the case. It’s the Note 10+ which is the true successor of the Note range and is targeted at Note loyalists, whereas the Note 10 is meant for those who want to venture into the Note ecosystem for the first time. And mind you, the difference between the two isn’t just a larger panel, and a bigger battery offered by the higher-end model. I’ll be covering how the siblings are different in this article as and when required. 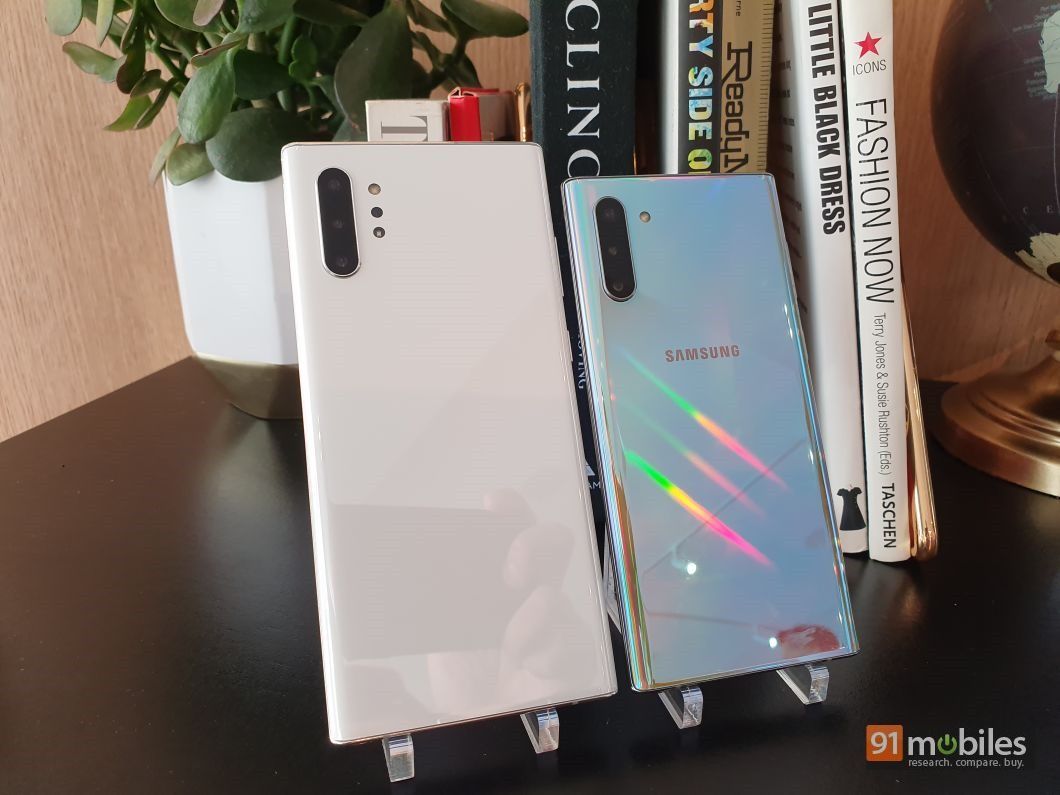 Unlike earlier when Note range used to share the design language with the Galaxy S phones, Samsung has tweaked the formula with the Note 10 devices this time. While the Galaxy S10 series featured an Infinity-O display with a punch hole to house the selfie camera(s) on the right edge, both the Galaxy Note 10 and Note 10+ have a centre-aligned punch hole that hides a single selfie shooter. The bezels have been shaved off even further, helping it achieve an astounding screen-to-body ratio. In fact, the Note 10 seems really compact and can be used with a single hand rather easily. In contrast, the Note 10+ would require you to use two hands for most operations. As usual, you’ll find the display curving around the sides to meet the frame. This should help in offering a more immersive experience, hopefully without triggering any accidental touches.

Speaking of that, the Super AMOLED screens measure 6.3-inches and 6.8-inches diagonally on the Note 10 and Note 10+ respectively. Interestingly, while Samsung has been offering 2k resolution on its flagships for a while now, in the case of the Note 10, the company has opted for full HD+ resolution, whereas its pricier brother’s display produces 1,440 x 3,040 pixels. The HDR 10+ compatible panels come protected by the latest Corning Gorilla Glass 6. 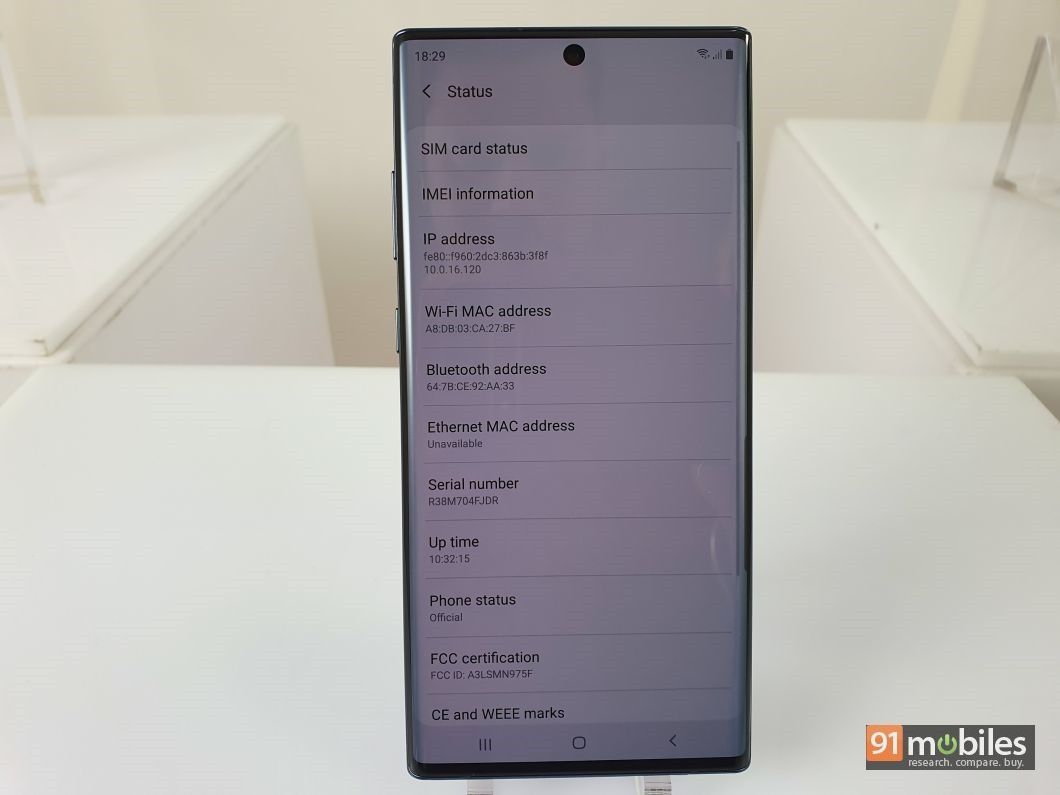 While you shouldn’t have any complaints in the display department, you’ll be bummed by the fact that Samsung – which was among the last brand standing as far as the inclusion of the good ol’ 3.5mm headphone socket – has finally relented. The Note 10 and Note 10+ miss out on the universal audio interface, and instead come bundled with a Type-C to 3.5mm converter to let you continue using your earphones. Other design elements have also been altered a little. There’s no Bixby button (good riddance perhaps), while the volume keys and power toggle can be found on the left spine. The base sports the Type-C socket and a speaker grille. Of course, the company continues with IP68 protection for both its flagship offerings.

Samsung boarded the triple-camera bandwagon for its flagships with the Galaxy S10 (review) and S10+ (review), and the Note 10 carries forward the same. However, the placement of the camera array is different – the shooters are aligned vertically instead of horizontally. Barring that, the specs remain the same… a 12-megapixel primary camera with dual aperture of f/1.5 and f/2.4, a 12-megapixel telephoto shooter enabling up to 2x zoom, and a 16-megapixel ultra wide-angle sensor. The bigger Note 10+ adds another camera to the mix – a 3D ToF sensor that’s supposed to help in clicking better portraits, and works for both photos and videos. Other camera-related features include support for OIS for the main sensor and phase detection autofocus, ability to record 4k videos and slow-mo clips at 960fps, etc. The selfie snapper is a 10MP sesnor that comes with a wide aperture of f/1.6 and offers PDAF tech for autofocusing. 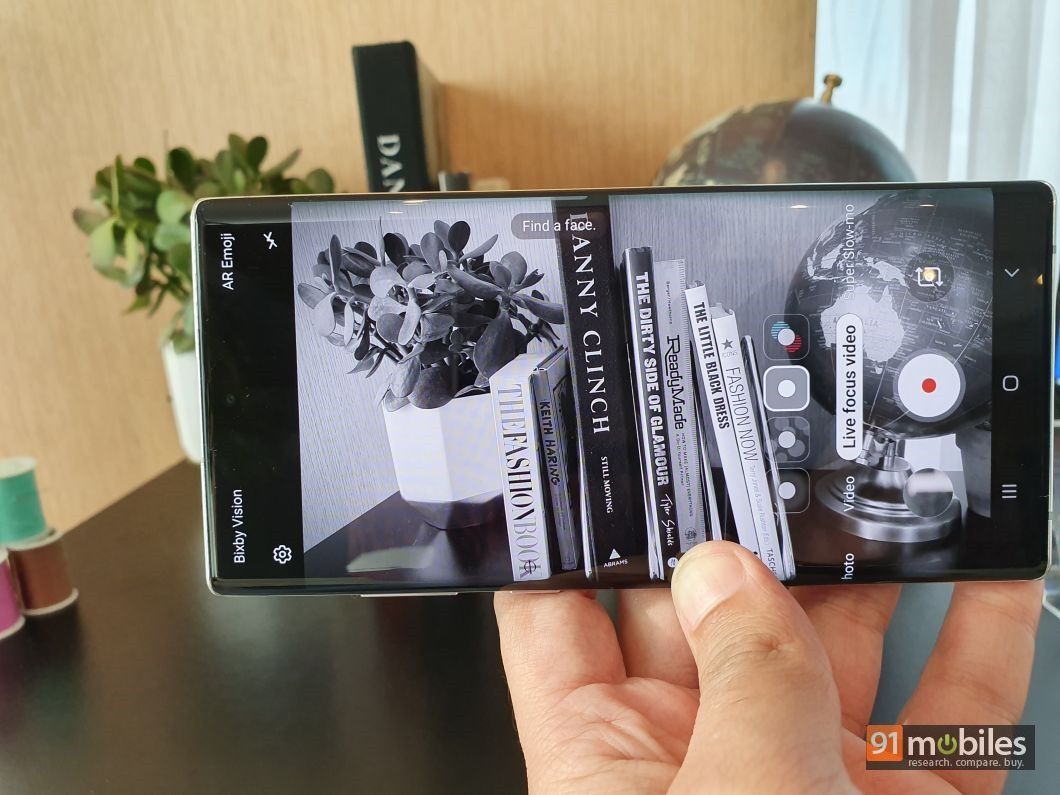 Of course, the highlight of the Note series is the S Pen, which is tucked away in the bottom right side of the Note 10 and Note 10+. Last year, the brand added Bluetooth functionality allowing the stylus to act as a remote control while using the camera app or playing music. Now, this feature has received an update to offer even more functionality with “Air Actions”. As the name indicates, you can now use various gestures to switch between the rear and front cameras (moving the stylus up and down), or modes (moving the S Pen left and right) among others. Samsung will be opening the SDK for this feature to third-party app developers too, which means that there’s enormous potential for how useful this could turn out to be. Another interesting capability is the writing to text converter which works quite well for converting any notes you have written via the S Pen into MS Word or PDF documents. What’s more, this isn’t restricted to just the English language and you could use it with even Hindi, Gujarati, etc. as 62 languages are supported. Other than that, you can continue to use the S Pen to draw something or jot down notes, along with making use of conventional gestures. 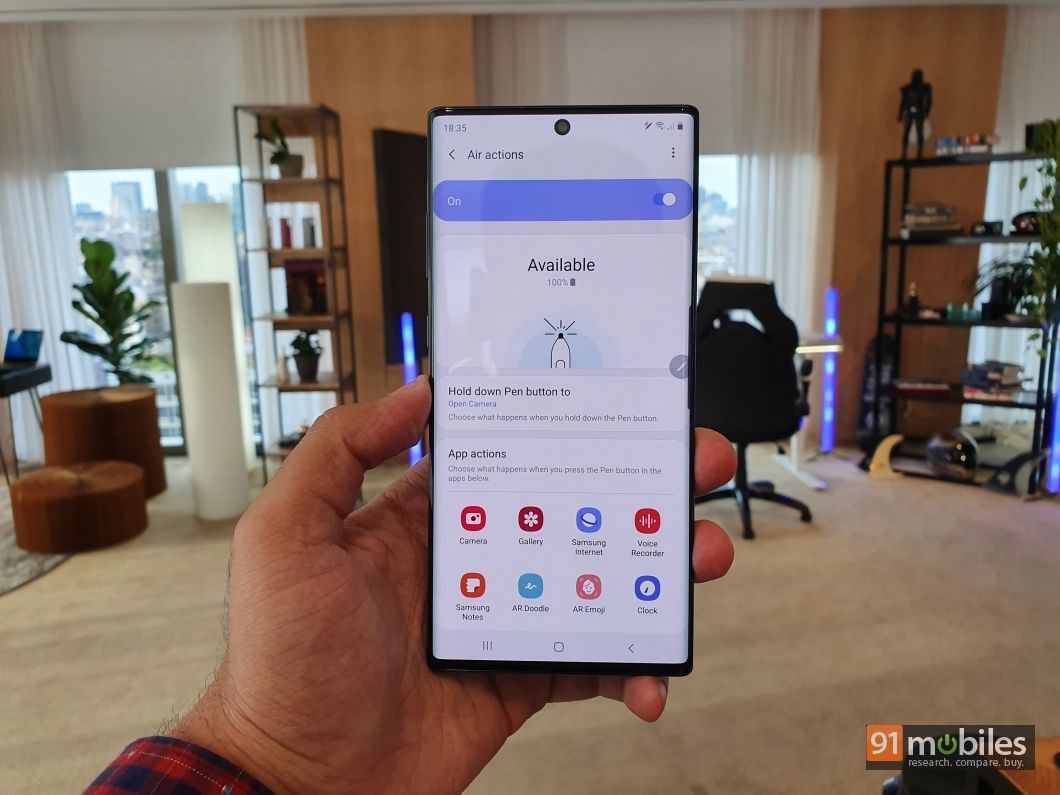 Under the hood, the Indian variants of the Galaxy Note 10 and Note 10+ come powered by the Exynos 9825 SoCs. The successor to the Exynos 9820 SoC, Exynos 9825 is built with 7nm fabrication process (vs 8nm die size for its predecessor). Creating clear differentiation between the Note 10 siblings, the Note 10 features 8GB RAM with 256GB RAM. Samsung’s Galaxy Note 10+ on the other hand, offers a single variant with 12GB RAM, while storage options are 256GB and 512GB. Moreover, the smaller version also misses out on the microSD card expansion slot, whereas the Note 10+ continues to offer one, letting users top up the memory by up to 1TB.

For security purposes, the Galaxy Note 10 and Note 10+ feature in-display ultrasonic fingerprint sensors as well as face unlock. The siblings boot One UI v1.5, which runs atop Android 9.0 Pie. You can expect the usual features, such as minimal bloatware, a refined UI and my personal favourite – Night mode. 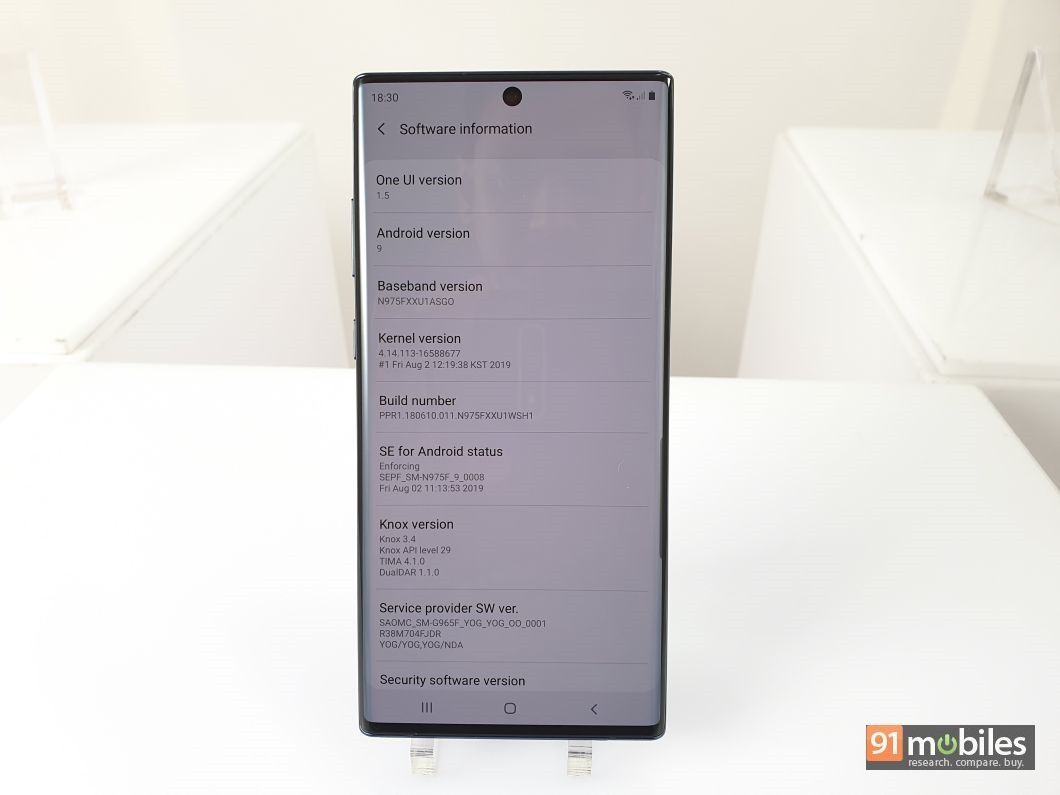 The Note 10 sips juice from a 3,500mAh battery, whereas the Samsung Galaxy Note 10+ packs in a beefier 4,300mAh cell. The siblings support fast-charging functionality and come with a 25W adapter. However, the Note 10+ supports 45W charging as well, though you’ll need to purchase the adapter for the same separately. The duo also supports wireless charging. 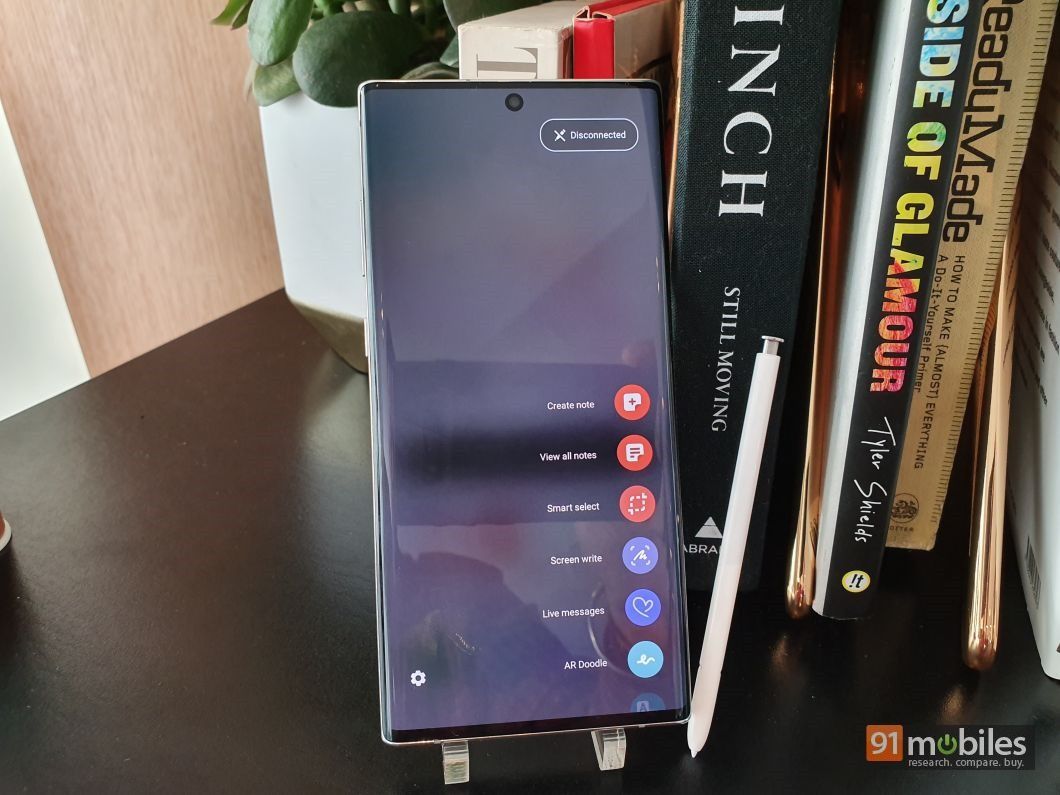 Samsung hasn’t revealed the pricing of the Galaxy Note 10 and Note 10+, but the devices will be arriving in the subcontinent in the month of August itself. There’s no denying the fact that Samsung’s latest Note models have gone all out in all departments, and we’ll certainly be putting the duo through its paces, so keep an eye out to know whether they’re worth your banknotes.