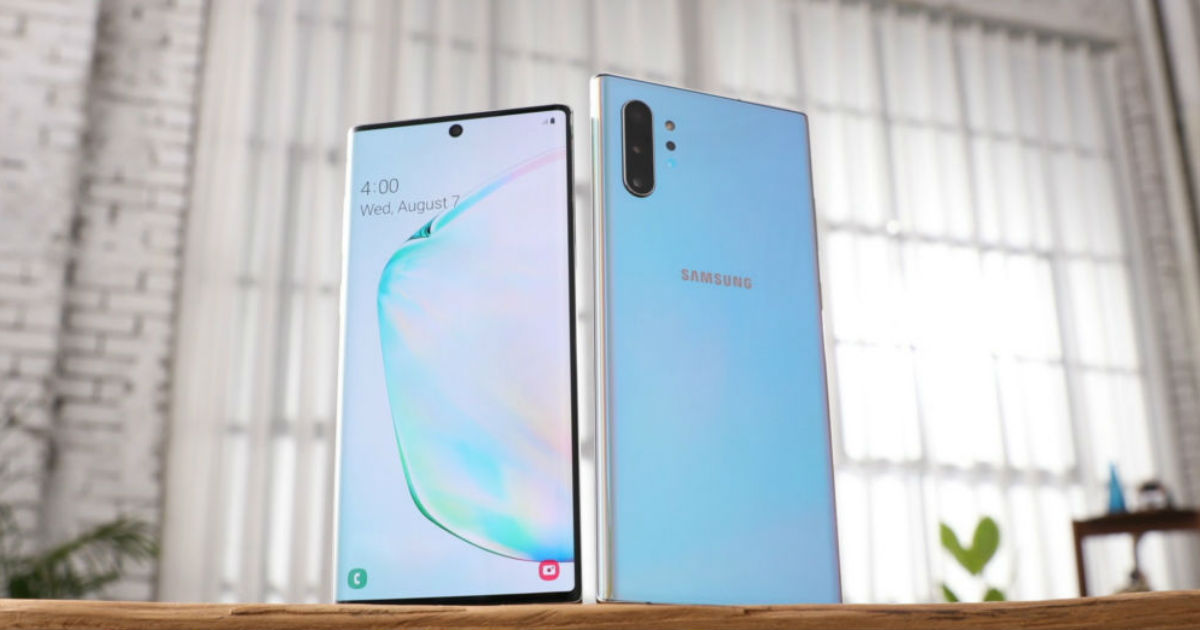 Samsung Galaxy Note 10 series (first impressions) has finally been introduced in India. It’s the next-gen phablet from Samsung that was officially announced earlier this month at an event in New York. The lineup consists of Galaxy Note 10 and Galaxy Note 10+ smartphones, both powered by the latest Exynos 9825 chipset and backed by new Infinity-O Dynamic AMOLED display, improved S Pen, beefy battery, and at least triple rear cameras. While the Samsung Galaxy Note 10 is the most affordable handset, it sacrifices on the bigger display, battery an additional ToF sensor that the more premium Plus model packs.

Samsung Galaxy Note 10 price in India is set at Rs 69,999 for 8GB RAM and 256GB storage variant. The Galaxy Note 10+, on the other hand, is available at Rs 79,999 and Rs 89,999 for the 12GB + 256GB and 12GB + 512GB variants, respectively. Both the smartphones come in Aura Glow, Aura White, and Aura Black colours and will be available for sale starting August 23rd via Samsung’s e-store, Flipkart, Amazon, Paytm, Tata CliQ, and retail stores across the country.

As for the launch offers, customers who have pre-booked the handset will be eligible to buy the Galaxy Watch Active at just Rs 9,999 instead of its actual price of Rs 19,990. Or, you can also choose to get the Galaxy Buds at a discounted price of Rs 4,999 instead of availing the Galaxy Watch Active offer. Over and above these two deals, the brand is offering up to Rs 6,000 cashback on the purchase of the handset with HDFC Bank credit and debit cards. Online customers can also avail up to Rs 6,000 cashback with ICICI Bank credit and debit cards.

The Samsung Galaxy Note 10 series is the first in the lineup to come in two models: a regular Note 10 and a Note 10+. The former ships with a 6.3-inch Dynamic AMOLED display that bears full HD+ resolution, punch-hole for the selfie camera, and an ultrasonic fingerprint scanner. The handset is driven by a 3,500mAh battery that supports up to 25W fast-charging and 12W reverse wireless charging speed. The Plus model, on the other hand, packs a 6.8-inch screen with a slightly better QHD+ resolution, punch-hole display, and an ultrasonic optical fingerprint scanner. The phone houses a beefy 4,300 battery with up to 45W wired fast-charging support, for which you have to purchase a charger, separately.

Apart from this, both the handsets boot Android 9 Pie-based One UI out of the box. They are equipped with the Exynos 9825 chipset, which is a successor to Exynos 9820 SoC that rocks the Galaxy S10 series. For photography, the Galaxy Note 10 sports a triple camera module with 12-megapixel wide-angle lens with variable f/1.5 – f/2.4 aperture, OIS, and 77-degree field-of-view + a 16-megapixel (f/2.2) ultra-wide-angle lens with 123-degree field-of-view + a 12-megapixel (f/2.1 and OIS) telephoto lens. The Galaxy Note 10+ has a similar setup along with an additional ToF sensor. Both the phones have a single 10-megapixel camera with f/2.2 aperture on the front for selfies and camera features such as Live Focus Video, Zoom-in Mic, Super Steady, Hyperlapse, AR Doodle, and Night Mode to further enhance the results.

The S-Pen for the Galaxy Note 10 series supports air gestures, quick video editing tools, access to games/ apps, and more. Other features include Samsung DeX compatibility, microSD card support, Qi-wireless charging, AI-based Game Booster mode, and PlayGalaxy Link P2P that will allow gamers to pause a game on a PC and then pick it up on their Note 10 handset. The connectivity options include LTE, 5G for the compatible model, Wi-Fi, Bluetooth v5.0, NFC, GPS/ Galileo, and USB Type-C that doubles up as a headphone jack.