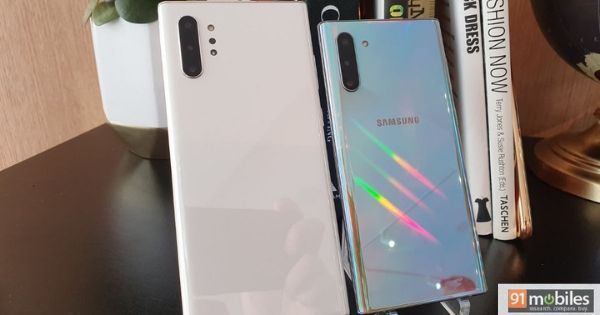 “Samsung is offering a cashback of Rs 6,000 on the purchases made using HDFC Bank and ICICI Bank cards”

Samsung Galaxy Note 10 and Note 10+ were launched at an event in New York yesterday. Soon after the unveiling, the South Korean tech giant announced that the new Note 10 series offering will be available to pre-order in India between August 8th and August 22nd, and will go on sale in the country starting from August 23rd. The phones has arrived as the first Galaxy Note series handsets to ditch a 3.5mm headphone jack to deliver audio via the USB Type-C port. Notably, the Galaxy Note 10 series phones are also the first in the Galaxy Note series from the brand to utilise a punch-hole display to accommodate the selfie camera.

How to pre-order Galaxy Note 10 series in India

You can pre-order Samsung Galaxy Note 10 series phones in India by visiting the brand’s website, apart from visiting the e-commerce portals like Flipkart, Amazon, Paytm, and Tata CliQ, and in the retail stores across the country. The smartphones are being offered in multiple colour options like Aura Glow, Aura Red, Aura White, and Aura Black. You can also pre-book the same handsets in the offline stores across the country. The e-tailers as well as the offline retailers are taking Samsung Galaxy Note 10 and Note 10+ pre-orders at starting price of Rs 69,999 and Rs 79,999, respectively; the bigger model’s 512GB variant costs Rs 89,999. As part of the pre-order offers, you can avail a cashback of Rs 6,000 utilising the HDFC and ICICI cards on different platforms.

As for the Samsung Galaxy Note 10 series specifications, you will find an under-display fingerprint sensor on board apart from the punch-hole camera module. The Galaxy Note 10 sports a 6.3-inch FHD+ screen, while the Plus variant gets a larger a 6.8-inch display with QHD+ resolution. Both are powered by the Exynos 9825 processor. The former offers a triple camera setup including a 12MP + 12MP + +16MP, while the latter gets an additional ToF sensor, apart from these three sensors.