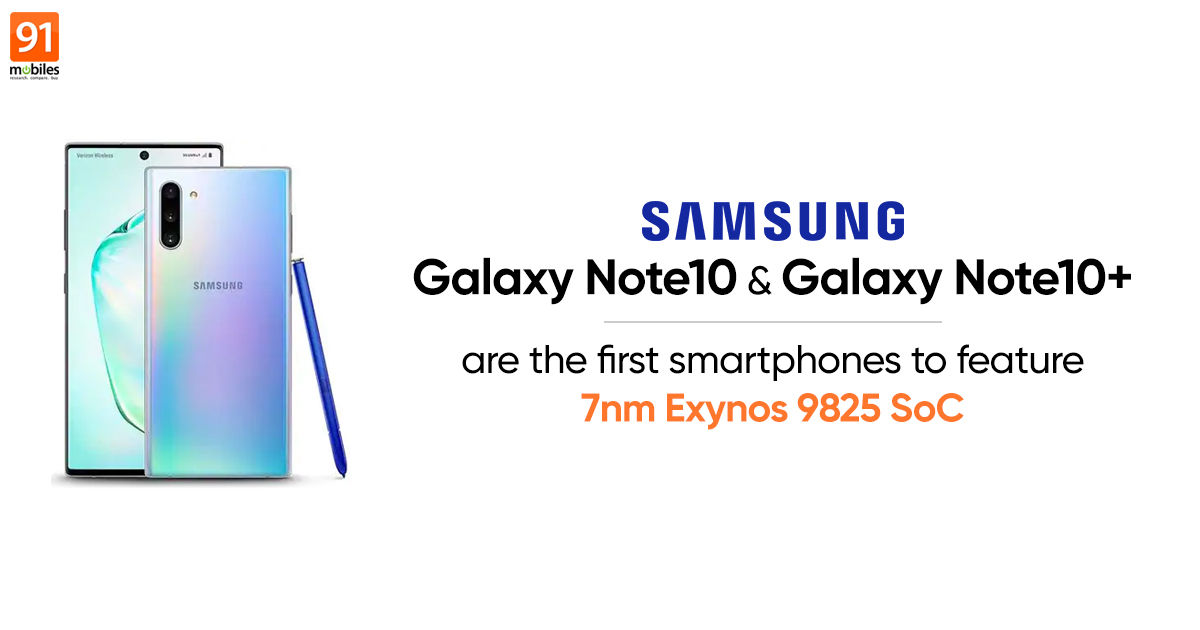 The Samsung Galaxy Note 10 series has officially been unveiled at the company’s Unpacked event in New York. The next-gen phablet consists of the standard Galaxy Note 10 and its Plus sibling, a first for the lineup. Both Samsung smartphones are powered by the flagship chipset, sports Dynamic AMOLED panel with HDR10+ support, ultrasonic in-display fingerprint scanner, and improved S-Pen that now supports air gestures. The Samsung Galaxy Note 10+ offers a bigger display, beefier battery, and quad-camera setup at the back, which give it an advantage over its smaller sibling. There are 5G variants of both the flagships as well, which will be available in select markets.

Talking about the specifications, Samsung Galaxy Note 10 series ships with a glass sandwich design and an Infinity-O display that has a punch-hole up top for the selfie camera. It’s similar to what we have seen on the Galaxy S10 series; however, the punch-hole this time is at the centre instead of the right corner. While the Galaxy Note 10 smartphone sports a 6.4-inch Dynamic AMOLED Display with 1,080 x 2,280p resolution and has a 3,500mAh battery that supports up to 25W fast-charging. The Plus model packs 6.8-inch Dynamic AMOLED Display that bears 1,080 x 3,040p resolution and comes with a bigger 4,300mAh battery, with up to 45W wired fast-charging support. Samsung is not bundling a 45W fast-charger with the handset, so it needs to be purchased separately.

In the camera department, the back panel of the handsets sports three sensors — a 12-megapixel wide-angle lens with variable f/1.5 – f/2.4 aperture, OIS, and 77-degree field-of-view; a 16-megapixel (f/2.2) ultra-wide-angle lens with 123-degree field-of-view; and a 12-megapixel (f/2.1 and OIS) telephoto lens. The Galaxy Note 10+ has an additional DepthVision camera aka 3D ToF lens. For selfies, both the handsets feature a single 10-megapixel camera with f/2.2 on the front. Camera features such as Live Focus Video, Zoom-in Mic, Super Steady, Hyperlapse, AR Doodle, Night Mode, are part of the package for the two smartphones; 3D Scanner is exclusive to the Plus model though.

Samsung Galaxy Note 10 series is driven by Qualcomm’s Snapdragon 855 SoC/ Exynos 9825 SoC, depending on the region; the two smartphones have a vapour chamber cooling system. The phonemaker ships the handsets with up to 12GB RAM and 512GB built-in storage configuration. The bigger model supports microSD cards of up to 1TB capacity, but the smaller one does not have the option to expand storage at all. For gamers, there is a AI-based Game Booster mode that is claimed to optimise performance and power consumption, depending on the game. The PlayGalaxy Link P2P will allow gamers to pause a game on a PC and then pick it up on their Note 10 handset. As for the S-Pen, it’s being dubbed as the “magic wand for your smartphone,” thanks to its air gesture support. The S Pen can be used for quickly editing videos, play games, access apps, and more, the company says.

Apart from this, the handsets have Samsung’s ultrasonic in-display fingerprint scanner and face unlock for biometrics. They boot Android 9 Pie-based One UI out of the box and feature connectivity options such as LTE, 5G for the compatible model, Wi-Fi, Bluetooth v5.0, USB Type-C, NFC, and GPS/ Galileo. These are the first Samsung flagships to ditch the 3.5mm audio jack and do not have the dedicated Bixby button on the side. The Galaxy Note 10 measures 151 x 71.8 x 7.9mm and weighs 168 grams whereas its elder sibling measures 162.3 x 77.2 x 7.9mm and weighs 196 grams (Note 10+ 5G mmWave model weighs 198g).

Both handsets are also compatible with Samsung DeX and Link to Windows platforms for enhanced productivity. Wireless PowerShare allows users to charge any Qi-compatible device wirelessly with the new Note models. However, the reverse wireless charging speeds are capped at 12W for the standard model and 15W for the Plus smartphone.