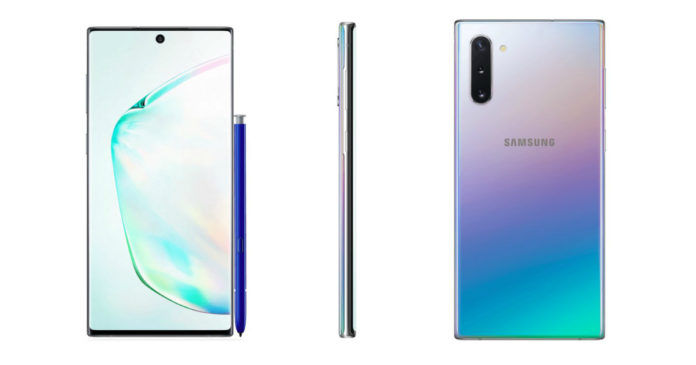 The bezels are smaller compared to the Note 9, and the rear cameras are positioned vertically, similar to the Huawei P30. Since the Samsung Galaxy Note 10 series is tipped to feature an in-display fingerprint sensor, there is no heart rate sensor at the back. Furthermore, the flagships will also be available in a new silver colour option with a gradient design and blue S Pen.

In line with previous rumours, the Bixby button is missing from the handset, which finally comes as a relief. The volume rockers and the power button are present on the right spine. On the other hand, the Samsung Galaxy Note 10+ packs an additional ToF sensor for 3D sensing and more accurate facial recognition. The AMOLED displays aren’t entirely borderless, as there is a relatively thin chin below the screen. There could be new S-Pen features.

As for the other specifications, the Samsung Galaxy Note 10 and Note 10+ said to sport a 6.28-inch and 6.75-inch displays, respectively. They could be powered by the Qualcomm Snapdragon 855/ Exynos 9820 SoC depending on the region and run on Android 9 Pie with One UI custom skin on top. Since the launch is less than a month away from now, we should know more details soon.