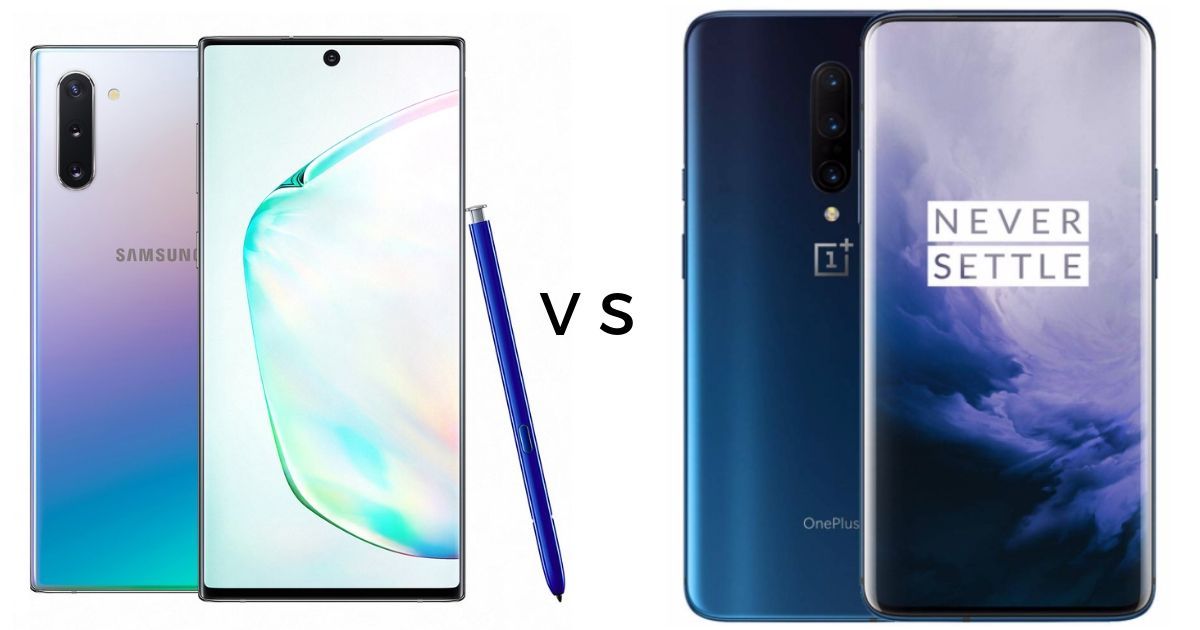 This comparison was inevitable. We had to compare the brand new Samsung Galaxy Note 10 with the OnePlus 7 Pro. On one side, we have the latest Note device from Samsung, which is also its best smartphone so far. On the other side, there’s the OnePlus 7 Pro, which is touted as the flagship killer. On paper, both these devices have similar specifications and features. However, the OnePlus 7 Pro does have an advantage when it comes to pricing and the display. Read on to know which one is a better device and find out the differences between the two.

The Samsung Galaxy Note 10 price is $949, which roughly equates to Rs 67,000. The smartphone comes with 8GB RAM and 256GB internal storage. That’s a lot more expensive than the base variant of the OnePlus model, which is not exactly an affordable smartphone but still priced more competitively than the Samsung flagship. The OnePlus 7 Pro price in India starts at Rs 48,999, for the variant with 6GB RAM and 128GB storage. If you want the variant with 8GB RAM and 256GB storage, same as the Note 10, then you will end up paying Rs 52,999. That’s about Rs 15,000 cheaper than the Samsung handset, despite the same specifications. Even the top of the line OnePlus 7 Pro with 12GB RAM and 256GB storage will cost you ‘just’ Rs 57,999.

Now, let’s take a look at the specifications of the Galaxy Note 10 and the OnePlus 7 Pro. As mentioned in the beginning, both phones have similar specifications, at least on paper. Both the devices are made out of premium glass and feature an aluminium frame. The OnePlus 7 Pro gives the Samsung Galaxy Note 10 a run for its money in the looks department as well. It’s got better gradients and a full-screen display without any notch or cutouts. The Note 10, on the other hand, has a centrally placed punch-hole camera at the top of the screen, eliminating the need for a moving component.

Talking about the screen, the Note 10 gets a 6.3-inch Dynamic AMOLED display with full-HD+ resolution, whereas the OnePlus 7 Pro offers a much better and larger 6.67-inch QHD+ AMOLED panel with a 90Hz refresh rate. Both displays offer HDR10+ support, but the latter is easily the better phone here. As for performance, the Samsung device in India will be powered by the Exynos 9825 SoC, while the OnePlus smartphone uses the Snapdragon 855.

Coming to the battery and software, the OnePlus 7 Pro has a 4,000mAh cell, while the Galaxy Note 10 has a smaller 3,500mAh unit. The Note 10 offers 25W of fast-charging support, compared to the 30W Warp Charge on the OnePlus device. Both phones run Android 9.0 Pie with their custom skins on top and lack the 3.5mm headphone jack. The Samsung handset comes with an in-display ultrasonic fingerprint scanner, whereas the OnePlus 7 Pro gets an optical in-display scanner. Samsung has included a new S Pen with the Note 10, which now supports Air Gestures and is better than the previous model. And it sits right inside the phone, which is great.