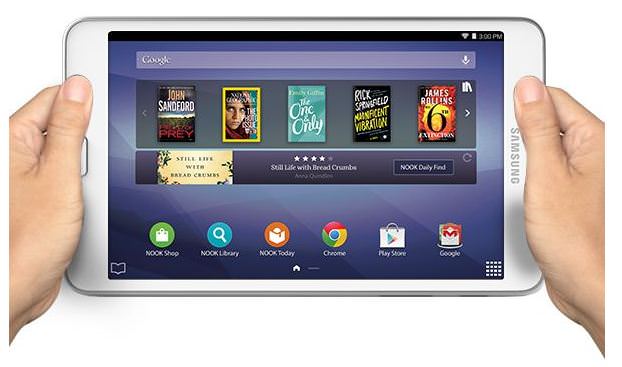 Samsung and Barnes & Noble announced back in June that they would be partnering to launch a Galaxy Tab 4 tablet with Nook branding. Now, the tablet has been officially launched, carrying a price tag of $179. 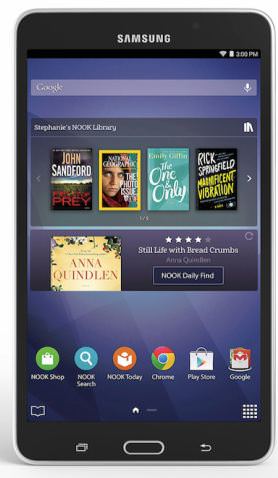 The Tab 4 Nook functions both as a full-fledged tablet and an e-reader. The slate features the customised Nook software. It displays recommendations for books and available deals directly on the home screen. In addition, it gives you quick access to your library, which includes the last book read, and the Nook Store. It also features Samsung’s Multi-Window app, letting you run two apps simultaneously. In terms of specifications, the tablet is identical to the Galaxy Tab 4. It features a 7-inch HD display, quad-core processor and 8GB of storage expandable up to 32GB via a microSD card. The slate runs Android 4.4 KitKat as a base, but as mentioned earlier sports the Nook UI instead of Samsung’s TouchWiz. The camera features include a 3MP rear snapper and 1.3MP front camera.

The Galaxy Tab 4 Nook offers up to 10 hours of regular battery usage.  Connectivity wise, it features Wi-Fi, Bluetooth, micro-USB and GPS. Unlike the Galaxy Tab 4, the device isn’t available in a 3G option.

The slate has already gone on sale in the US, but there’s no word on if it will be available globally. The Tab 4 Nook is similar to Amazon’s Kindle Fire HD tablets, which offer the same e-reader/tablet combination.