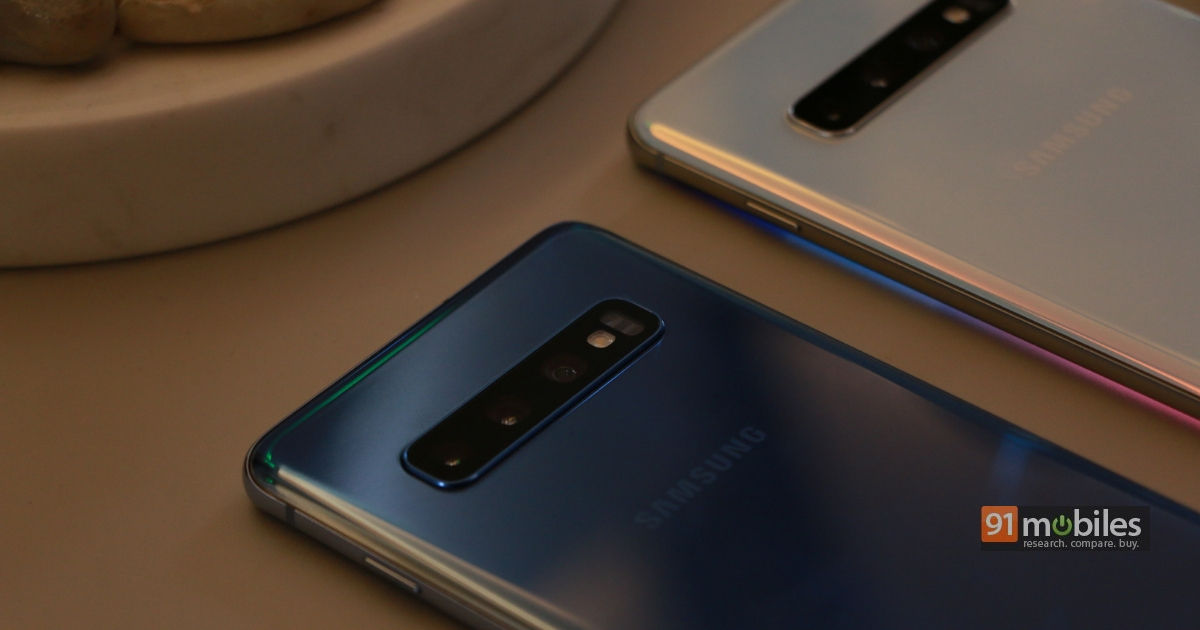 The number 10 seems to hold a special fascination for electronics brands, and while I can’t put my finger on the exact reason, I’d like to think that the figure’s association with perfection might have something to do with it. Samsung’s famed S series of flagship smartphones is celebrating its tenth anniversary this year, and the Chaebol has made sure to bring out the big guns to mark the occasion. Drumroll, ladies and gentlemen, as we officially welcome the Galaxy S10 family of flagships… 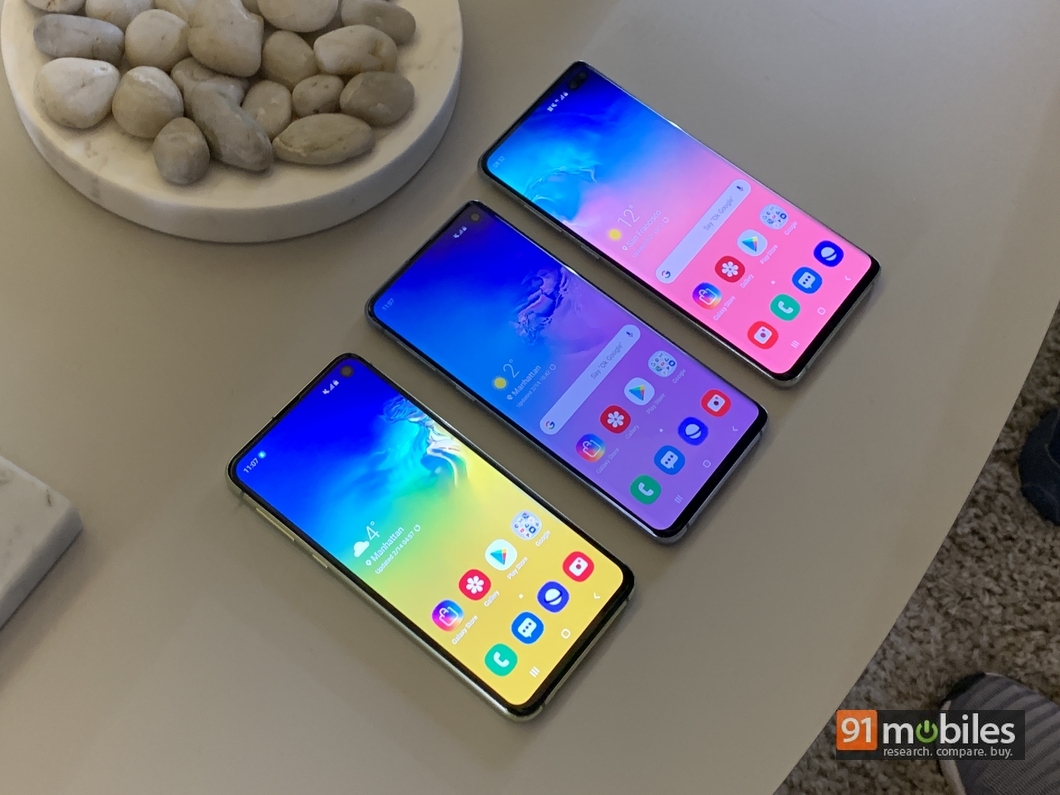 Apple did it with its iPhone lineup last year, and now Samsung seems to be doing something similar with its flagship smartphones by introducing not one, not two, but three models in its Galaxy S series. While the Galaxy S10e draws parallels with Apple’s iPhone XR (review) in a way, the S10 and the S10+ are true-blue flagships, somewhat similar to what Apple did with the iPhone XS (review) and XS Max (review). But enough comparisons, those iPhones I’m alluding to are so 2018, aren’t they? Leaks, more leaks and even more leaks notwithstanding, let’s take a closer look at the Galaxy S10 and the S10+, check out the ammunition they come packed with, and figure out if they can act as torchbearers for Samsung at least till the time the Galaxy Note10 lands later in the year. 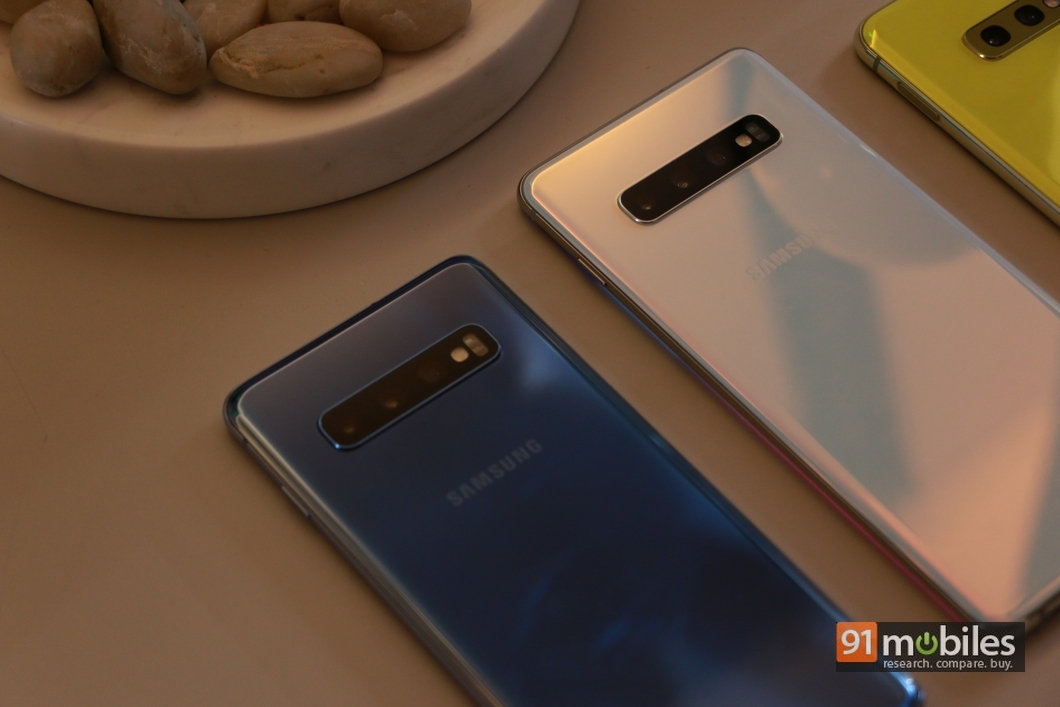 The Galaxy S10 and S10+ aren’t too different when it comes to the core specs, and vary just a tad bit in terms of the screen size, battery capacity and front cameras. Encased in glass, as all flagships are, the S10 duo sport what Samsung’s calling Dynamic AMOLED displays. These 19:9, QHD+ screens are curved, and as a world first, carry HDR10+ certification, boasting up to 1200 nits of brightness. Also present under the screens are ultrasonic fingerprint sensors, which is a first for Samsung. The Infinity-O displays, as the brand likes to call its punch-hole display phones, look quite vibrant and sharp, and thanks to HDR10+ certification, should be offer a very immersive experience for video watching. 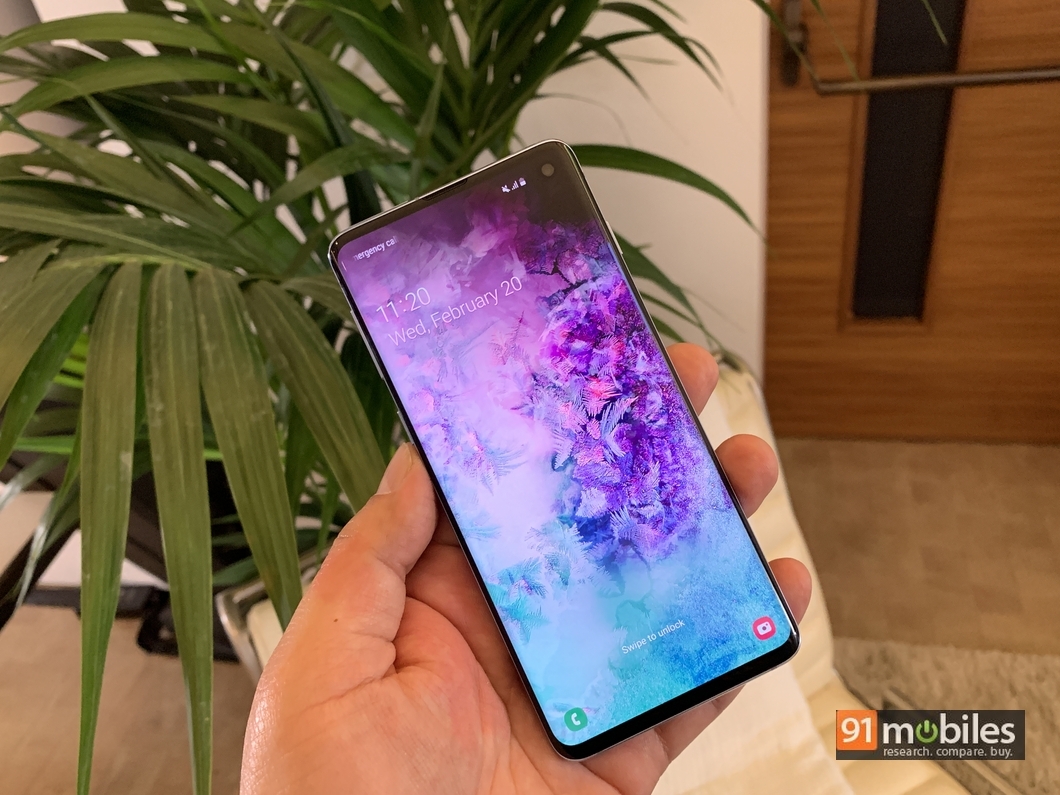 The S10’s screen measures 6.1-inches, while the display on the S10+ spans 6.4-inches diagonally. The S10 (pictured above) is obviously the smaller of the two, and because of that, utilises a smaller battery too – 3,400mAh vs 4,100 mAh in the S10+. The third, and last aspect these two phone differ pertains to the selfie cameras. While the S10 has a single 10MP f/1.9 front camera, the S10+ boasts dual sensors on the front – pairing the same 10MP sensor with an 8-meg fixed focus depth sensor (pictured below). 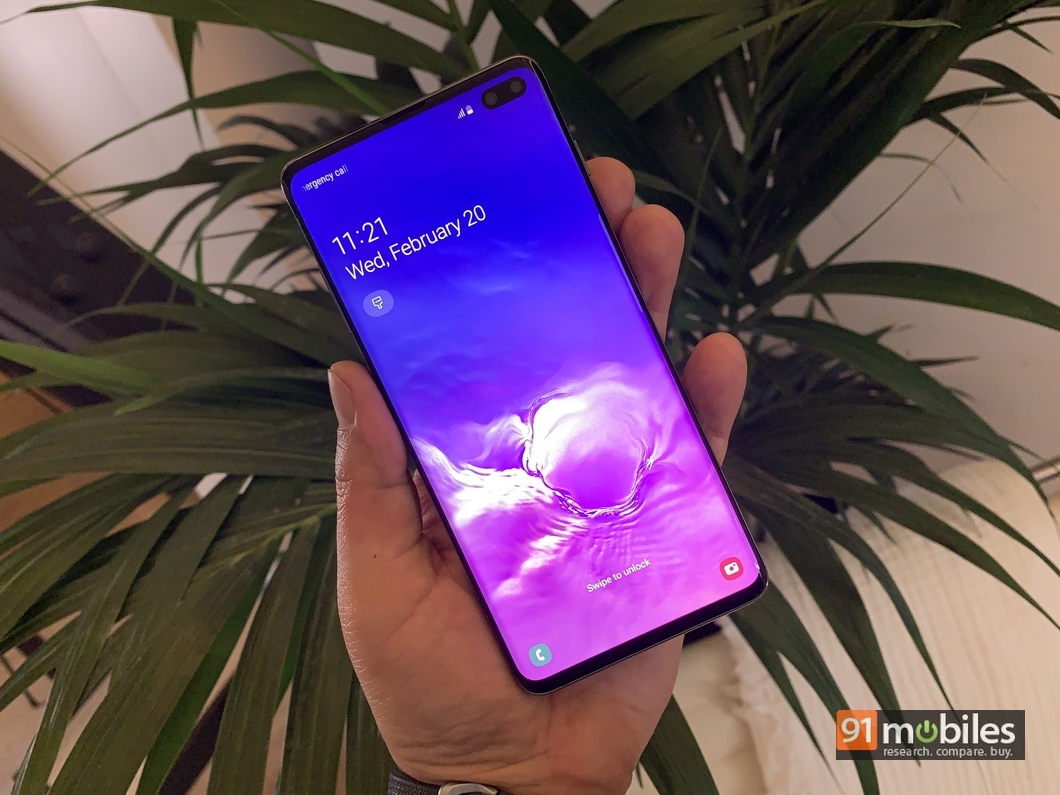 The design language is the same, and the two phones have really slim bezels. On the left is the volume rocker, along with the Bixby button, while the power key is on the right. Flip to the rear, and you’ll see the triple-camera setup along with the flash and the heart rate sensor, all placed together vertically. Since the fingerprint scanner, seen on the rear on previous Galaxy S series models, has now moved to the front under the display, all you’ll find at the back apart from the camera module is the Samsung branding.

The top of the phone is home to a secondary microphone and SIM tray, while the bottom where you’ll find the USB Type-C port, speaker and a 3.5mm headset socket. Yup, Samsung is still betting on the usefulness of this little orifice, and that’s good news for audio purists. The likes of Apple, Google and OnePlus have all bid adieu to the plain o’l headset jack a while ago. 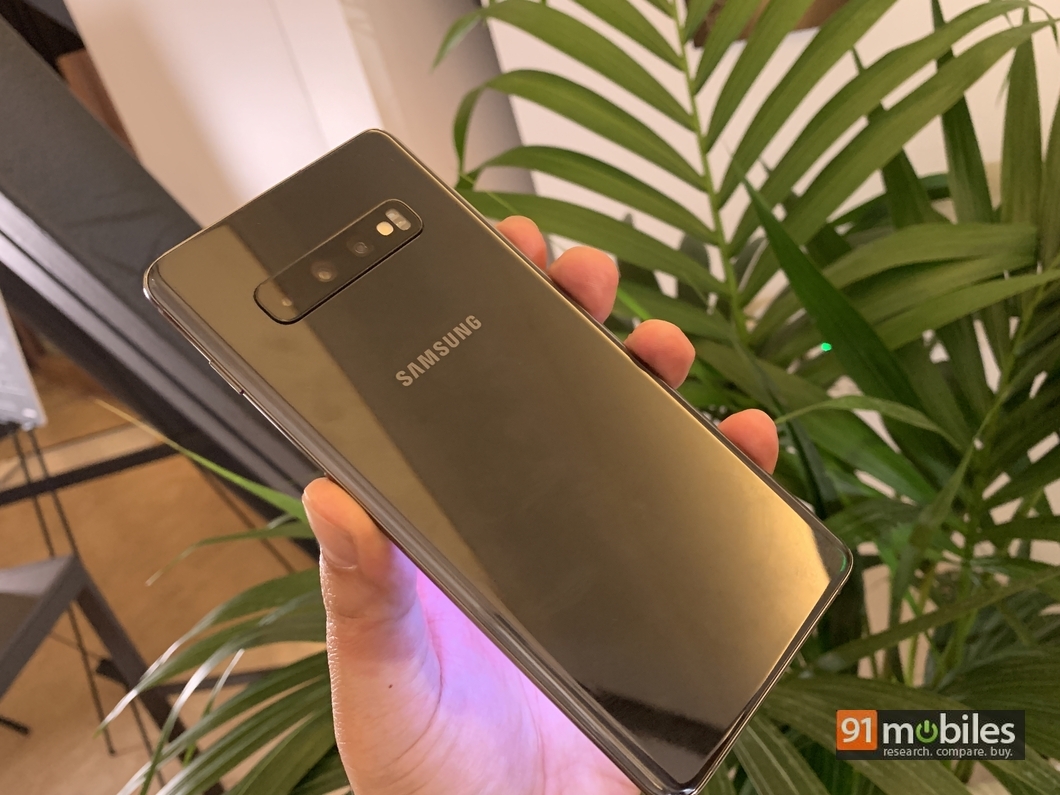 Inside ticks Samsung’s new Exynos 9820 octa-core SoC, which has been fabricated using the 8nm process and boasts an integrated NPU for AI-related tasks. Graphics are handled by a Mali-G76 MP12 GPU. The SoC boasts support for LTE Advanced Pro Cat 20, with a theoretical max speed of 2.0 Gbps. The S10 and S10+ are also Wi-Fi 6 ready and support the 802.11ax standard. As usual, in the US and a few other regions, the S10 models will be powered by Qualcomm’s latest flagship SoC, the Snapdragon 855 chipset, while India will get the Exynos-powered variants. The S10 and S10+ will come with 8GB of RAM, mated to either 128GB or 512GB of storage, with the option of adding another 512GB via microSD. In addition, the top-end variant of the Galaxy S10+ will offer 12 gigs of RAM, along with a whopping 1TB of storage. And in case you still need more, you can go ahead and pop in another 512GB using the microSD slot, taking total storage up to a cool 1.5TB.

Gamers would be pleased to know that the Galaxy S10+ features Vapor Chamber cooling that prevents overheating and promises sustained smooth performance. The phone is Unity Engine optimised, and even supports Dolby Atmos for gaming. 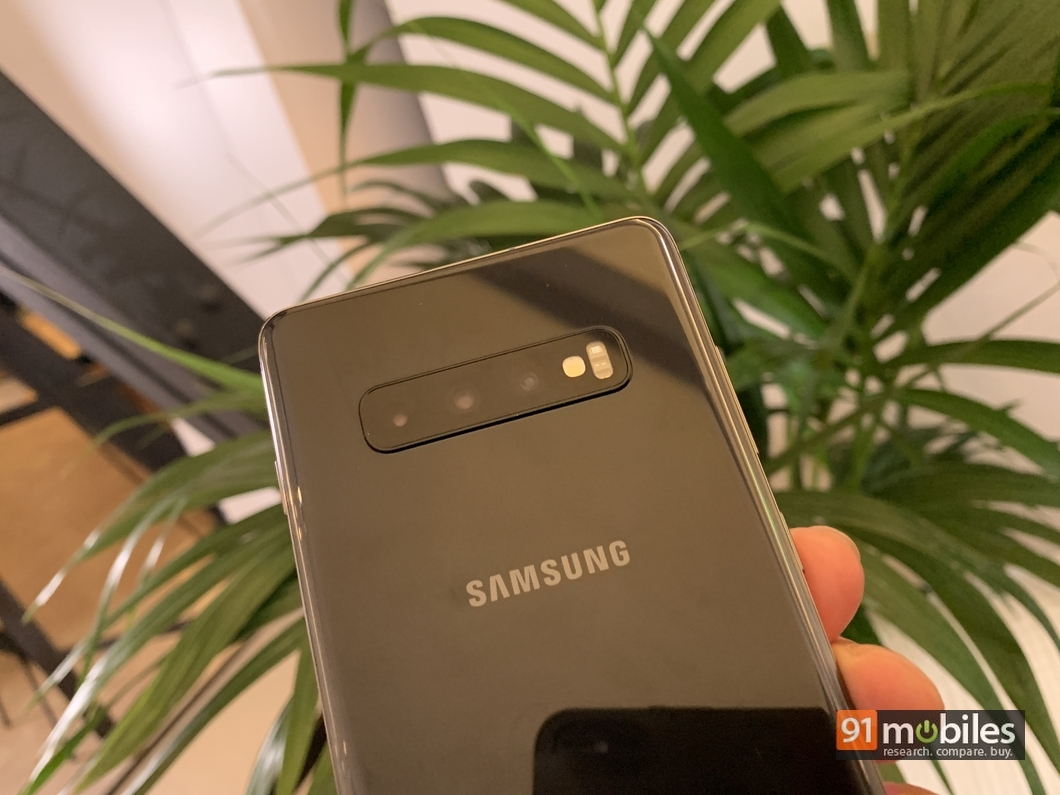 The triple-camera array at the rear comprises a 12MP sensor with a dual aperture (f/1.5 and f/2.4), along with a 12MP telephoto lens and an ultra-wide 16MP fixed focus lens. Both the 12MP sensors feature OIS as well. Photography features include SuperSteady video, Scene Optimiser (recognises up to 30 scenes) and Shot Suggestions. 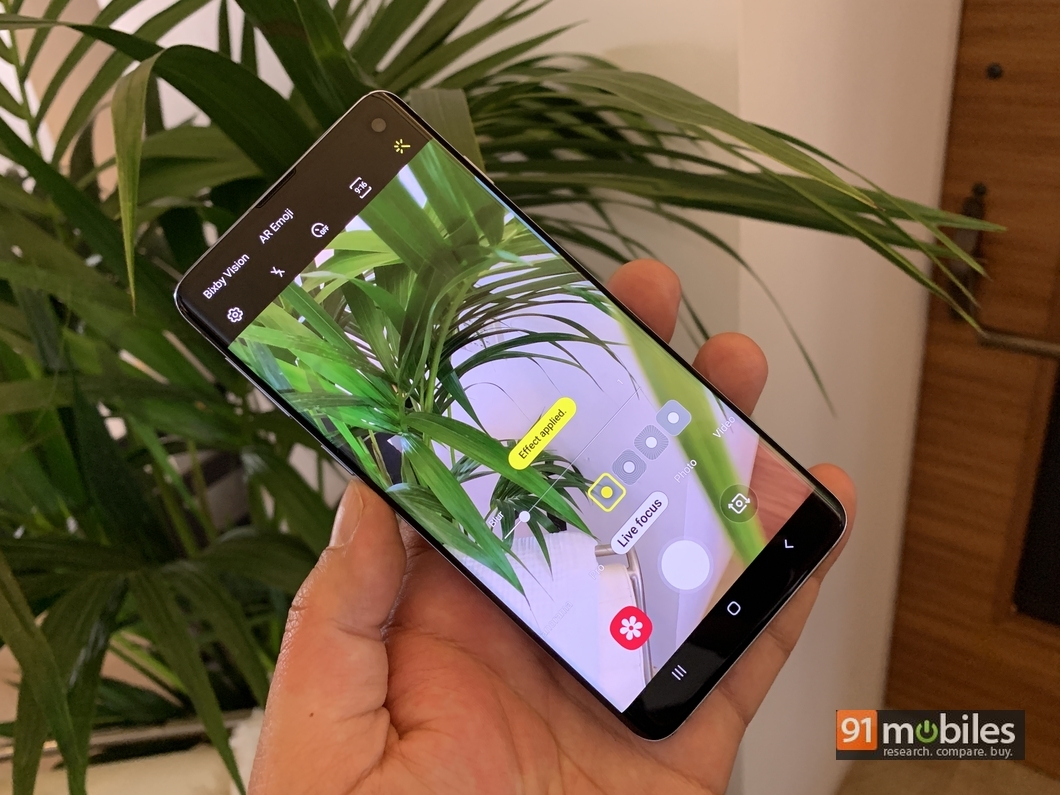 Of course, Samsung hasn’t forgotten the basics, and both the S10 and S10+ are IP68 rated for resistance to dust and water, and include support for fast charging in both wired as well as wireless modes. Also on offer is a feature called Wireless PowerShare, which is Samsung speak for reverse wireless charging, first seen on the Huawei Mate 20 Pro. This feature can be activated straight from the quick settings panel itself. 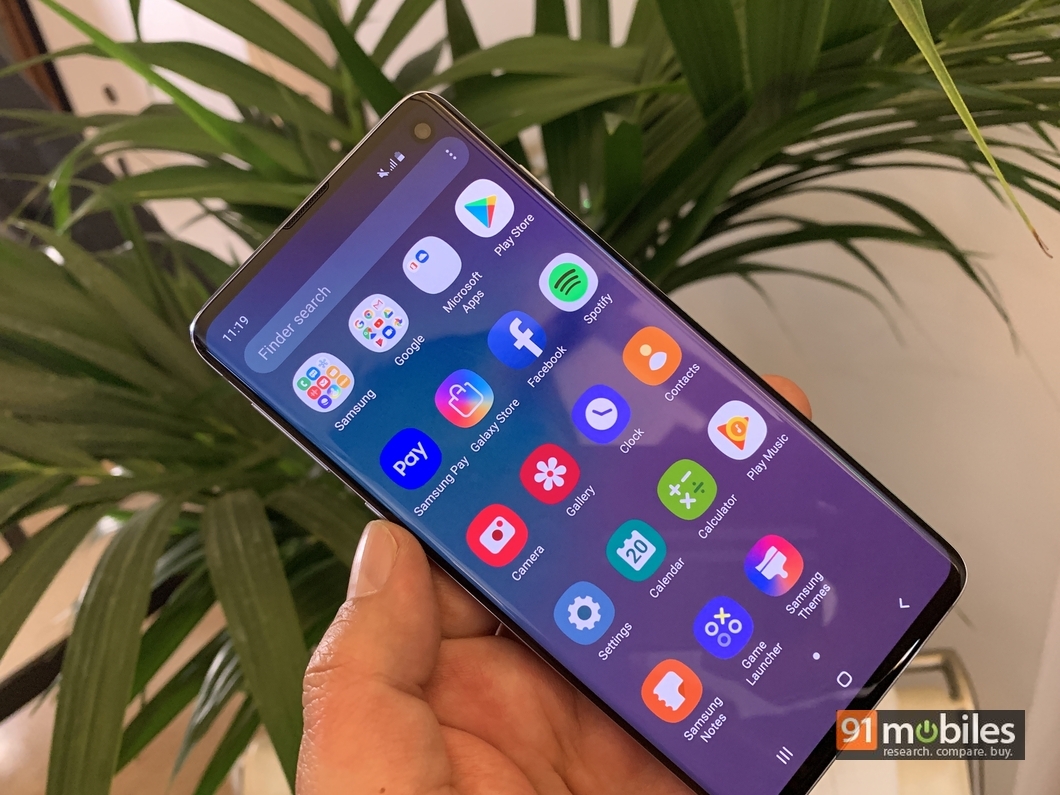 Software-wise, there’s Android 9 Pie with Samsung’s One UI. The clean-looking, minimalistic platform comes with the usual set of apps, including standard fare from Google, Samsung and Microsoft. Also preloaded on the demo unit was Facebook, Samsung Pay, Game Launcher and Spotify, with the last one being dependent on regional availability. It might be pure speculation as of now, but who knows… the India launch of Spotify’s music streaming service, which is expected soon, might just be timed to coincide with the Iaunch of these phones in the country. Speaking of, the S10 and S10+ will be going on pre-order on February 21st, and will ship starting March. Those who pre-book a unit will get a pair of the new Samsung Galaxy Buds free. 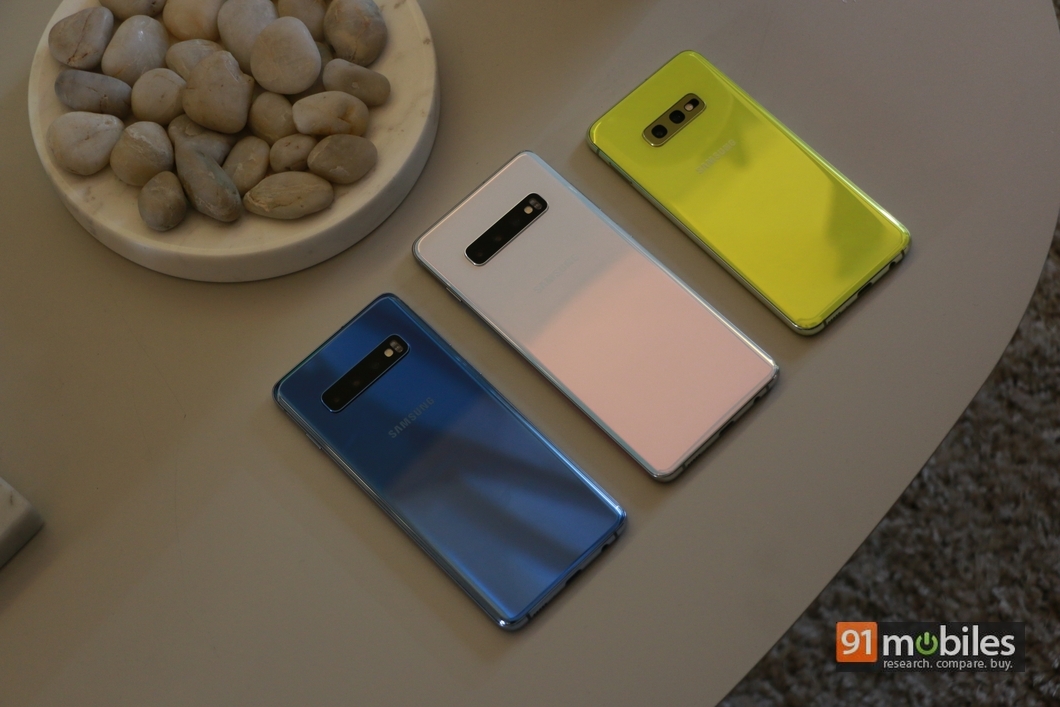 I did mention at the very beginning that Samsung has brought out the big guns fo, and looking at the specs and feature set of the new flagships, it’s clear that the brand is leaving no stone unturned to make sure the S10 and S10+ pack in all the features and capabilities one would want in a premium daily driver. These phones follow the latest trends (multiple cameras, in-display fingerprint scanner, punch-hole displays, et al) and promise to score high on all fronts. Are they truly innovative? Maybe not. Do they have what it takes to pique the interest of the discernible buyer? Maybe. Are they the most loaded smartphones money can buy. You bet. With MWC 2019 set to commence in just a few days, we’re bound to exciting, innovative offerings from other brands as well. Only time will tell whether the new S10 and S10+ can hold the torch high for Samsung, but for now, colour me impressed.