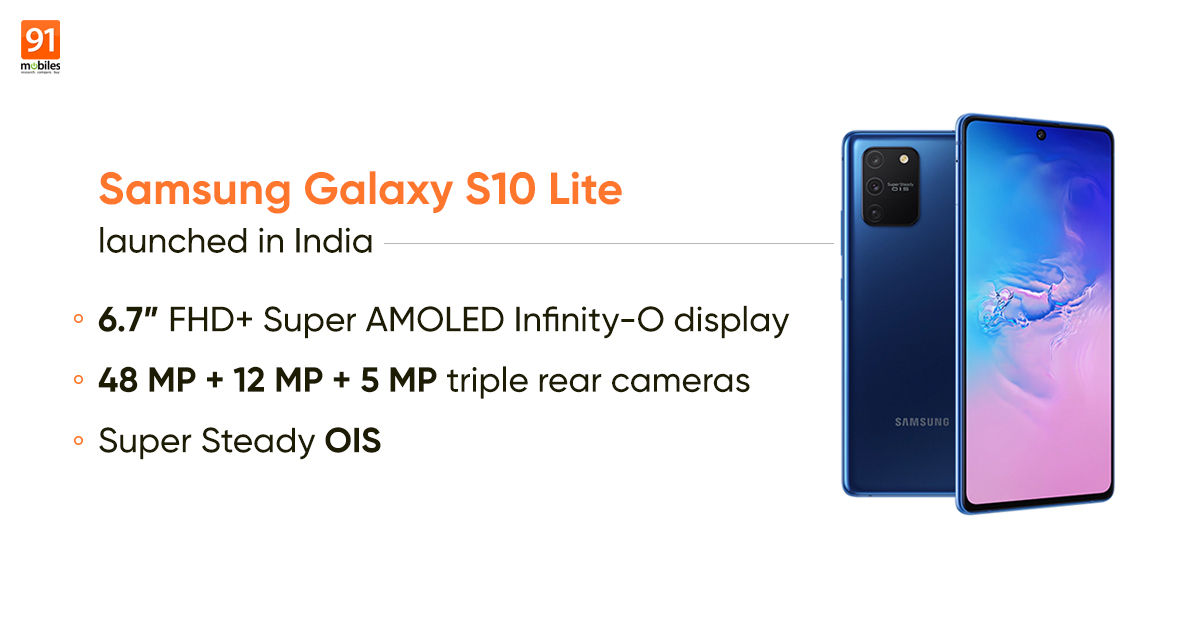 After the Galaxy Note 10 Lite, Samsung has now launched the Galaxy S10 Lite in India. The latest Lite smartphone happens to be the most affordable in the Galaxy S10 lineup and is priced well below the Galaxy S10e. The all-new Samsung Galaxy S10 Lite, which was announced globally earlier this year, is the first in the Galaxy S10 series to launch with a Snapdragon 855 SoC in India. Other key specifications also include an Infinity-O display, 48MP triple rear cameras with Super Steady OIS, Android 10 with One UI 2.0 on top and a 4,500mAh battery.

Samsung Galaxy S10 Lite price in India set at Rs 39,999 for the 8GB RAM + 128GB storage variant. This makes the Galaxy S10 Lite significantly cheaper than the Galaxy S10e, which was launched at Rs 55,900. The smartphone is up for pre-booking right now on Flipkart and Samsung’s online store. It will go on sale starting February 4th via Flipkart, Samsung.com and leading retail stores across India. in Prism White, Prism Black and Prism Blue colour options.

Launch offers for the Samsung Galaxy S10 Lite include a one time screen replacement at Rs 1,999 for pre-booking customers, and cash back of Rs 3,000 for ICICI card users.

Why pay in full when you get EMIs with 0% interest?
Buy the Samsung Galaxy S10 Lite now and pay later in flexible EMIs!
Know More

The Samsung Galaxy S10 Lite ships with a 6.7-inch Full HD+ (2400×1080 pixels) Super AMOLED Plus Infinity-O display. It has a Galaxy Note 10-like centred punch-hole for the selfie camera atop, HDR10+ support, and in-display fingerprint scanner. The phone comes with a 32MP selfie camera with f/2.2 aperture and triple-rear camera setup with 48MP primary shooter, which is the first in the Galaxy S-series lineup. The sensor is assisted by a 12MP Ultra Wide sensor with f/2.2 aperture, 5MP macro camera with f/2.0 aperture.

Apart from this, the Galaxy S10 Lite camera also features Super Steady OIS, which is a hardware-backed feature for “gimbal-like stability” and “UHD quality” to your live videos and photos in low-light conditions.