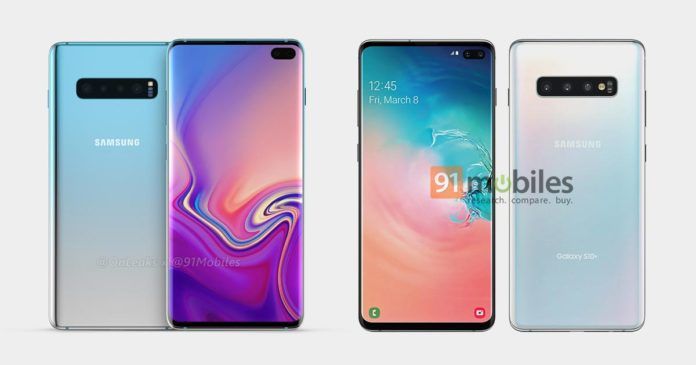 Samsung’s Galaxy S10 series will go official in a couple of days, ending the long trail of relentless leaks surrounding the flagship series. However, until that happens, there’s still time for some more information. The company will aim for the limelight with a number of marquee announcements at the Unpacked event set to take place in the US. One of them will undoubtedly be the top-end version of the Galaxy S10+ that will reportedly feature 1TB native storage and 12GB of RAM. The same handset is also thought to feature a ceramic build. Prices of the top-end Samsung Galaxy S10+ variant leaked in China yesterday, and it seems the smartphone will cost a bomb.

As can be seen in the above image, there will be two colours for the ceramic version – Black and White. However, what will likely catch your attention first is the RMB 10,000 price tag for the 12GB + 1TB variant. This roughly translates to around $1,476 or Rs 1,05,408. There’s a 8GB + 512GB version as well that is shown with a RMB 9,000 price tag. Prices in India will vary a bit as Samsung does seem to price other markets with a more premium price tag compared to India. So, we could see some more discounts over the leaked prices. The leak also hints that Samsung will stick to the Galaxy S10 + moniker instead of the rumoured S10 Pro leaked earlier.

The Galaxy S10+ will have dual front cameras that will separate it from the other two variants. Previously, it has been revealed that the series will be the first to have OIS-enabled selfie cameras. The handset will also have an ultrasonic fingerprint reader and reverse wireless charging, as revealed by previous reports. Samsung is expected to launch the relatively affordable Galaxy S10e and a bunch of accessories such as Galaxy Buds earbuds, Galaxy Watch Active smartwatch, and Galaxy Fit and Galaxy Fit e fitness trackers at the same event.