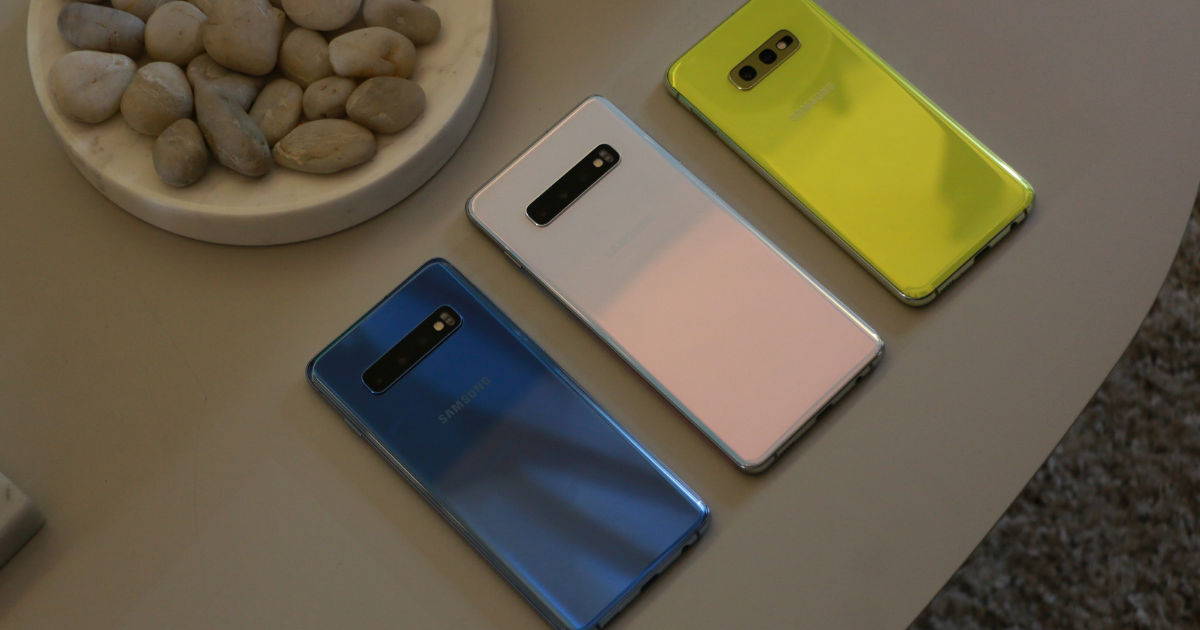 “The Galaxy S10 trio will be available to pre-order starting tomorrow, and will start shipping in March”

Samsung has finally unveiled its latest Galaxy S series smartphones at its pre-MWC Unpacked event in San Francisco today. The South Korean tech giant has introduced three new brand new flagships dubbed the Galaxy S10, Galaxy S10+, and Galaxy S10e, which commemorate the 10th anniversary of the famed S series of devices. The Galaxy S10 and S10+ have also arrived as the company’s first smartphones to flaunt ultrasonic fingerprint sensors under the screens. On the other hand, the Galaxy S10e is a slightly toned-down version of the duo with a compact design. 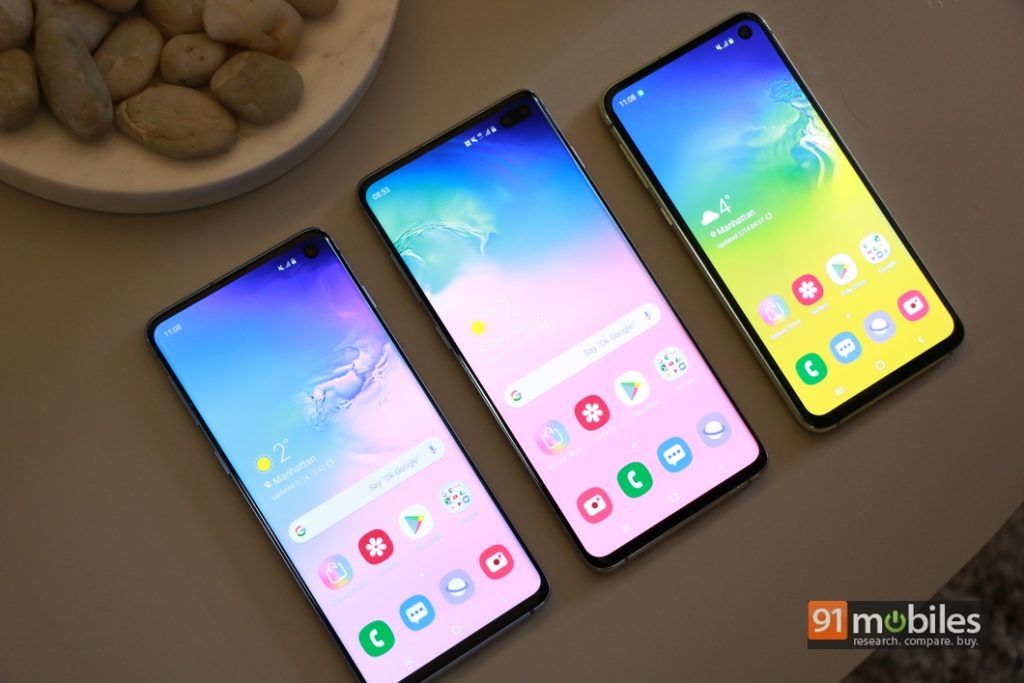 To start with the prices, Samsung Galaxy S10e will cost $749 (about Rs 53,500) for the base variant. Similarly, the Galaxy S10 and Galaxy S10+ prices will start at $899.99 (roughly Rs 65,000) and $999.99 (around Rs 71,000), respectively. All three handsets will come in Prism White, Prism Black, Prism Green, Prism Blue, Canary Yellow, and Flamingo Pink colours. Additionally, the Galaxy S10+ will come with premium ceramic finishes in black and white colours. Pre-orders for all three models will start today, with consumers in select markets will get the new Galaxy Buds earbuds (worth $129.99) for free on booking the Galaxy S10 and Galaxy S10+ in advance.

Talking about the specifications, Galaxy S10 and Galaxy S10+ aren’t much different when it comes to the core specs. They differ in terms of display size, battery capacity, and selfie shooters. Both feature metal and glass sandwich design, and offer IP68 certification for water and dust resistance, and the good-old 3.5mm headphone socket. Both offer fast charging in both wired and wireless modes, and get a new feature called Wireless PowerShare that offers reverse charging capability. Notably, the new Galaxy S10 duo is loaded with Vapor Chamber Cooling to keep the heat down while performing to the max.

Moving on to the other features, the Galaxy S10 and Galaxy S10+ offer curved Dynamic AMOLED punch-hole Infinity O HDR+ screens with QHD+ resolution and an aspect ratio of 19:9. The Galaxy S10 gets a 6.1-inch screen, while the Galaxy S10+ sports a slightly bigger 6.4-inch display. The former is equipped with a 3,400mAh battery, while the latter offers a beefier 4,100mAh power cell.

Under the hood, the Galaxy S10 and S10+ pack in Samsung’s 8nm manufacturing process-based octa-core Exynos 9820 processor. The chipset gets an integrated NPU (Neural Processing Unit) to handle AI-related tasks. As expected, in the US and a few other markets, the duo will be available with Qualcomm’s 7nm-based Snapdragon 855 processor. Configuration-wise, the Galaxy S10 comes with 8GB of RAM as standard and is being offered in 128GB and 512GB storage variants. The Galaxy S10 gets 8GB and 12GB of RAM models, and three storage options – 128GB, 512GB, and 1TB. All of these variants also support microSD cards up to 512GB in size.

In the camera department, the Samsung Galaxy S10 and S10+ boast of a triple primary camera setup with Dual OIS at the rear. They sport a 12MP wide-angle main sensor with autofocus and variable aperture – f/1.5 and f/2.4, aided by a 12MP autofocus telephoto lens and an ultra-wide 16MP fixed-focus sensor. The smartphones feature up to 2X optical zoom and up to 10X digital zoom. For selfies, the Galaxy S10 gets a single 10MP f/1.9 autofocus camera, while the Galaxy S10+ sports an additional 8MP fixed-focus f/2.2 sensor for depth sensing.

As for the other specs, the Samsung Galaxy S10 and S10+ sport a heart rate sensor at the rear. In terms of connectivity, they offer LTE Advanced Pro Cat.20 support, and are capable of offering a theoretical download speed of 2Gbps and upload speed of 150Mbps. The phones are Wi-Fi 6 ready and support the 802.11ax standard. Software wise, the devices boot Android 9 Pie with the brand’s One UI on top. Notably, the handsets are Unity Engine optimised and support Dolby Atmos to deliver an immersive gaming experience. 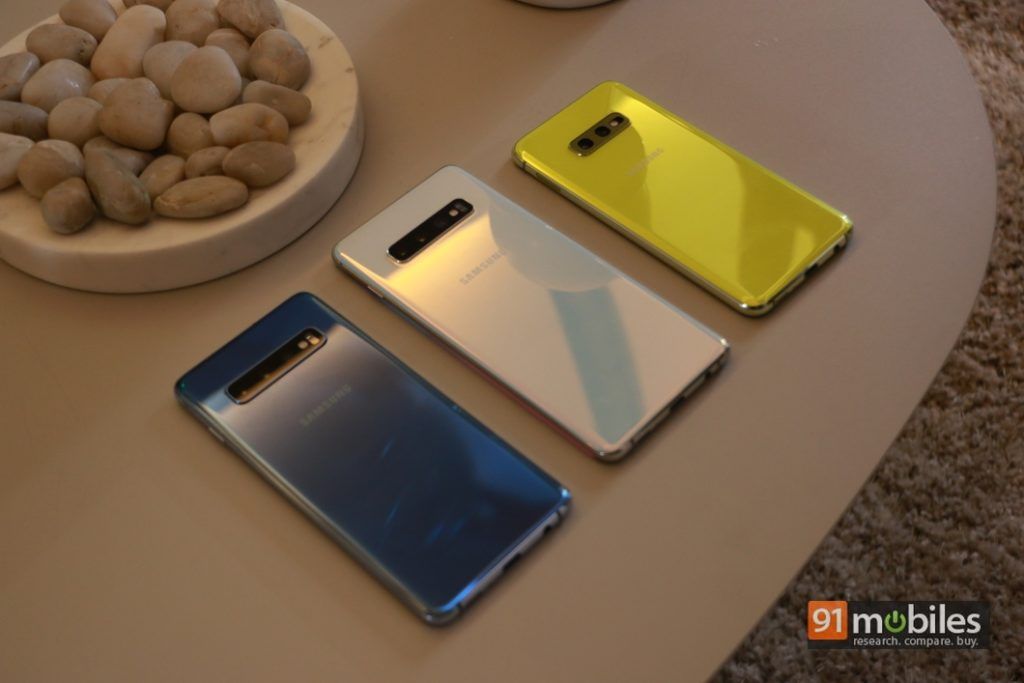 Talking about the entry-level handset in the new series, Galaxy S10e offers the same design language as its other siblings, except that its fingerprint sensor is embedded into the power button on the right side. This one offers a 5.8-inch flat Dynamic AMOLED display with full HD+ resolution and an aspect ratio of 19:9. The smartphone comes in two RAM and two storage configurations – 6GB / 8GB and 128GB / 256GB, which both can accept microSD cards up to 512GB in size. The phone has been fitted with a smaller 3,100mAh battery with fast charging support in both wireless and wired modes, and gets the same reverse charging option as its siblings. Under the hood, the smartphone offers the same Exynos and Qualcomm chipset options, depending on the markets. 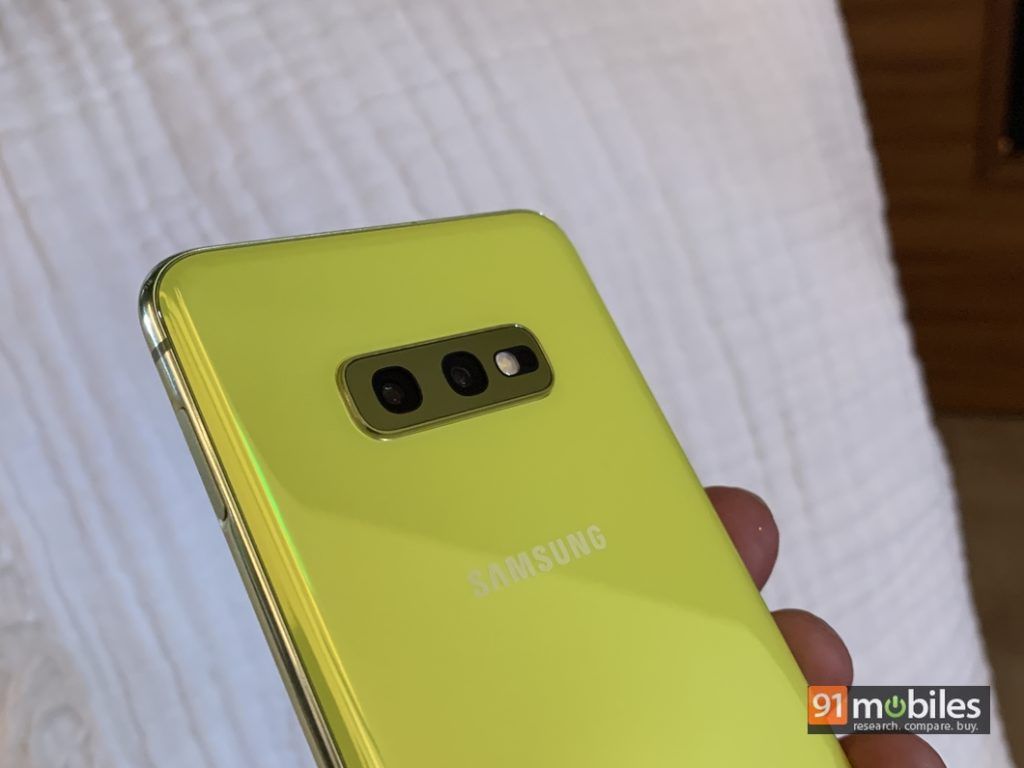 In the optics department, the Galaxy S10e is equipped with a dual primary camera setup at the rear. The phone has a 12MP autofocus wide-angle sensor with a variable aperture (f/1.5 and f/2.4) and OIS, aided by an ultra-wide 16MP fixed-focus f/2.2 sensor. For selfies, the handset gets the same 10MP sensor as the Galaxy S10. Lastly, the phone’s software and connectivity features are similar to the Galaxy S10 and S10+.