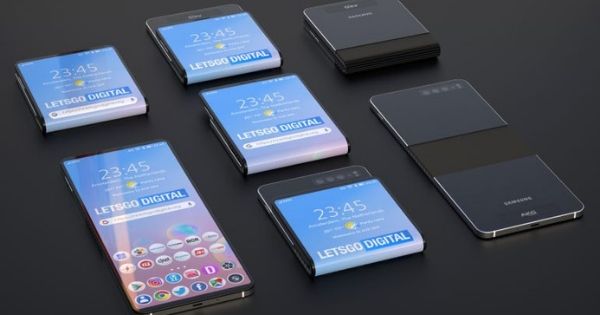 According to a new report, Samsung is currently developing its next foldable smartphone, but it may not be as powerful as the current Galaxy Fold. A recent patent had revealed that the next Galaxy Fold will feature a clamshell like design, making it smaller in size. If the new report is true, then we may see a new Galaxy Fold next year with smaller design and less powerful internals. The report also states that Samsung would be launching up to three 5G variants of the Galaxy S11 smartphones.

The Galaxy Fold is still not available for purchase but is expected to go on sale next month. Samsung’s first foldable smartphone did not do very well in the hands of reviewers. Most of the review units were plagued with major issues and the company had to delay the launch to fix all the issues. Samsung even admitted that it pushed the Galaxy Fold launch knowing that it wasn’t ready for public use. That could be a reason why the company wants to make the next Galaxy Fold less powerful, apart from bringing down the cost to the consumers, of course.

The report states that a new Samsung smartphone with a foldable screen is under development. This device carries the model number SM-F700F, which is lower than the number of the Galaxy Fold (SM-F900F). The new Fold device is expected to feature the latest 7nm Exynos chipsets, perhaps newer variants than the ones used in the Galaxy Note 10 series. The company could also move to 48-megapixel and 64-megapixel sensors from the 12-megapixel units used in current flagship devices.

Finally, Samsung may launch up to three variants of the 5G Galaxy S11 in 2020. The new Galaxy S11 series is expected to be launched in Q1 2020 and the model numbers are said to be SM-G981, SM-G986, and SM-G988. The phones could continue to use the punch-hole camera design from the selfie camera and come with 45W fast-charging. The devices are also expected to get improved ultrasonic fingerprint readers that have a larger input area than current models.

Previously, reports have said the Samsung Galaxy S11 line is being developed under the codename Picasso and will feature a punch-hole display as well as 5nm processor. It will reportedly use the 64MP ISOCELL Bright GW1 sensor, and the more expensive Plus variant may even use the new company’s new 108MP sensor though that’s just speculation at this point. Lastly, the company’s One UI 2.1, based on Android 10, is said to debut with the Samsung Galaxy S11 series. We will have to wait for February next year to find out exactly how the smartphones shape up, though leaks in the coming months should give us some pretty good indications of that.