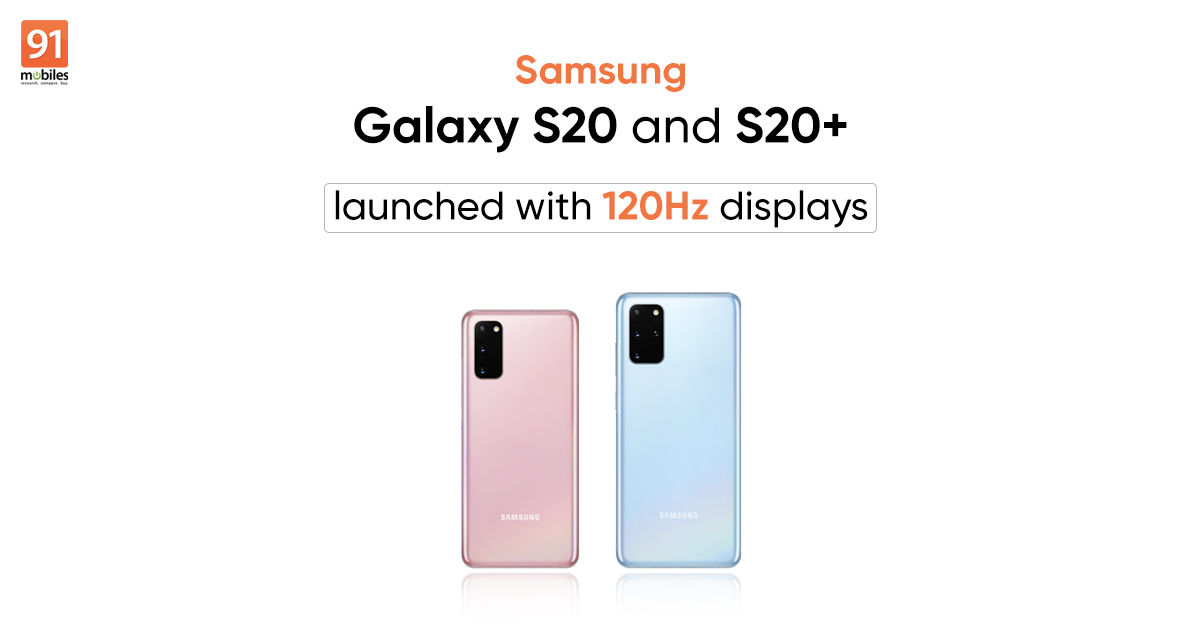 Samsung has launched its much-awaited Galaxy S20-series smartphones globally. The successor to Galaxy S10 series was unveiled at an event in San Francisco, putting an end to a long trail of leaks and rumours. The lineup, like last year, includes three models – Galaxy S20, Galaxy S20+, and Galaxy S20 Ultra. The Galaxy S20 Ultra is the most premium offering in the lineup (and the overall market too), while the Galaxy S20 and S20+ are slightly more affordable. The latter two feature Dynamic AMOLED Infinity O displays with a centred punch-hole for the selfie camera, Quad HD+ resolution, and an astounding 120Hz refresh rate. The phones also rock flagship chipset, 5G connectivity (optional), beefy batteries, and an array of cameras with up to 30X zoom, which Samsung is marketing as ‘Space Zoom’.

The Samsung Galaxy S20 price will start at $999 (about Rs 72,000) in the US, while the Galaxy S20+ will begin at $1,199 (roughly Rs 85,000). Both the smartphones will go on sale on March 6th in the country. It should be noted that the US market probably won’t get the 4G variants of the two smartphones, meaning these prices are for the 5G models. Therefore, we can expect the 4G-only India variants of the Samsung Galaxy S20 and S20+ to be priced a little lower than these. 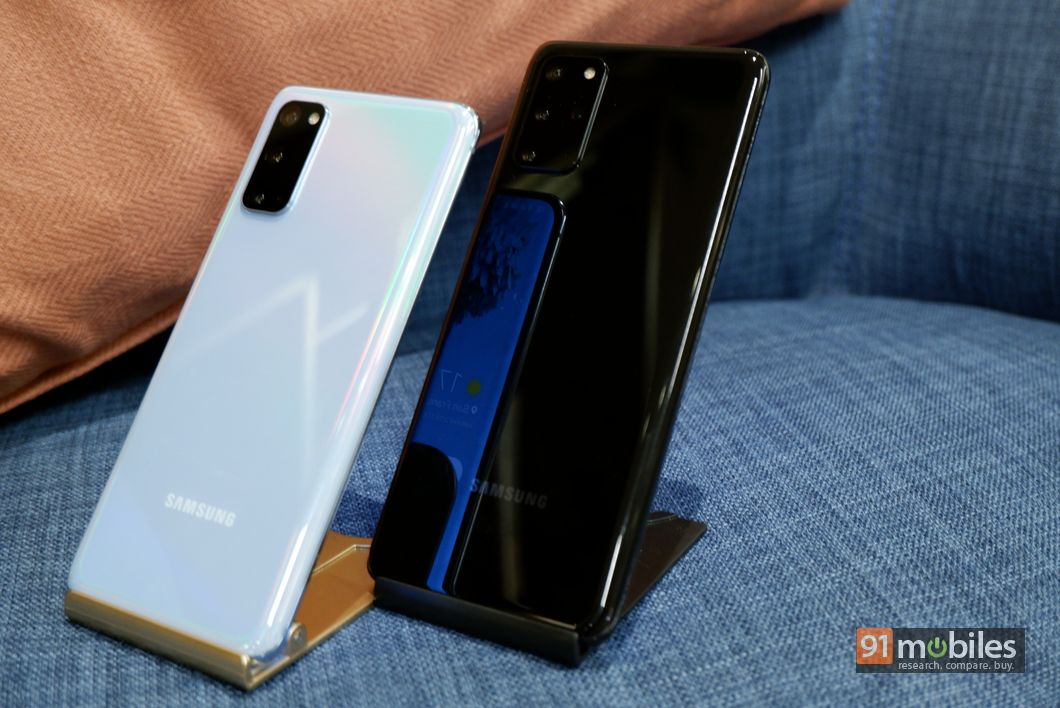 Starting with the Samsung Galaxy S20 specifications, the handset ships with a 6.2-inch Dynamic AMOLED Infinity-O display that bears HDR10+ support, Quad HD+ (1,440 x 3,200p) resolution, and 120Hz refresh rate. The display is also home to an ultrasonic in-display fingerprint scanner and a punch-hole for security and the selfie camera respectively. The 5G variant of the smartphone is powered by the 7nm 64-bit octa-core Snapdragon 865 SoC and comes with 12GB RAM and 128GB storage. On the other hand, the 4G-only variant – which will be heading to the Indian market – will be powered by Exynos 990 chipset and feature 8GB RAM and 128GB onboard storage. Both variants have expandable storage of up to 1TB using a microSD card. 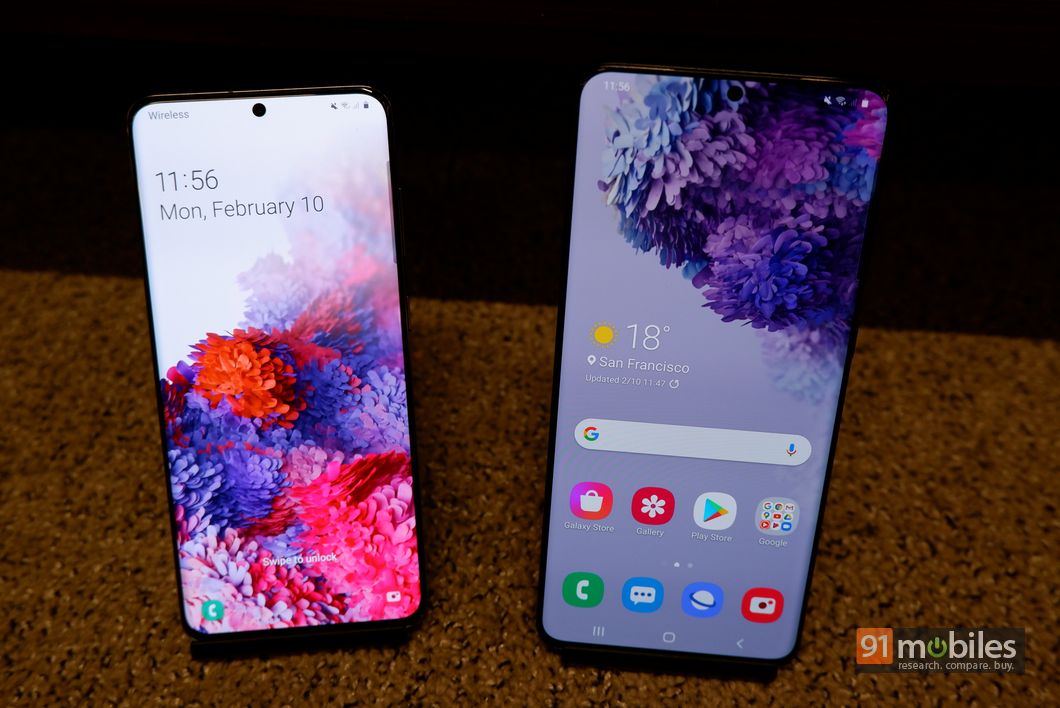 In the camera department, Samsung Galaxy S20 rocks a triple-rear camera setup, which comprises of 12MP primary sensor with f/1.8 aperture, OIS, and Super Speed Dual Pixel AF; a 12MP ultra-wide sensor with f/2.0 aperture and 120-degree field-of-view; and 64MP telephoto lens with f/2.0 aperture, PDAF, and OIS. The front camera of the phone gets 10MP (f/2.2) dual-pixel AF shooter with 80-degree field-of-view. The cameras are backed by 8K video recording and Space Zoom technology that is said to feature a combination of Hybrid Optic Zoom and Super-Resolution Zoom, which includes AI-powered digital zoom, to reduce quality loss at up to 30x zoom levels.

Software-wise, the Samsung Galaxy S20 boots One UI 2.0 atop Android 10 out of the box. The handset is driven by a beefy 4,000mAh battery with 25W fast wired charging tech and Fast Wireless Charge 2.0 tech. Connectivity options include Wi-Fi, e-SIM support, 5G/ LTE, Bluetooth 5.0, and Type-C charging port that doubles up as an audio jack. The phone measures 151.7 x 69.1 x 7.9mm and weighs 163 grams.

Samsung Galaxy S20+ specifications, on the other hand, include a slightly bigger 6.7-inch Dynamic AMOLED display compared to its sibling. The display sports QHD+ resolution, HDR10+ support, and an ultrasonic in-display fingerprint scanner. The smartphone’s India model will be powered by the Exynos 990 SoC and come with 8GB RAM and 128GB storage. In markets with 5G availability, the company will be offering the Snapdragon 865-powered Samsung Galaxy S20+ variant, which will come in 12GB + 128GB, 12GB + 256GB, and 12GB + 512GB configurations. Both the 4G and 5G variants of the smartphone will support up to 1TB microSD cards. 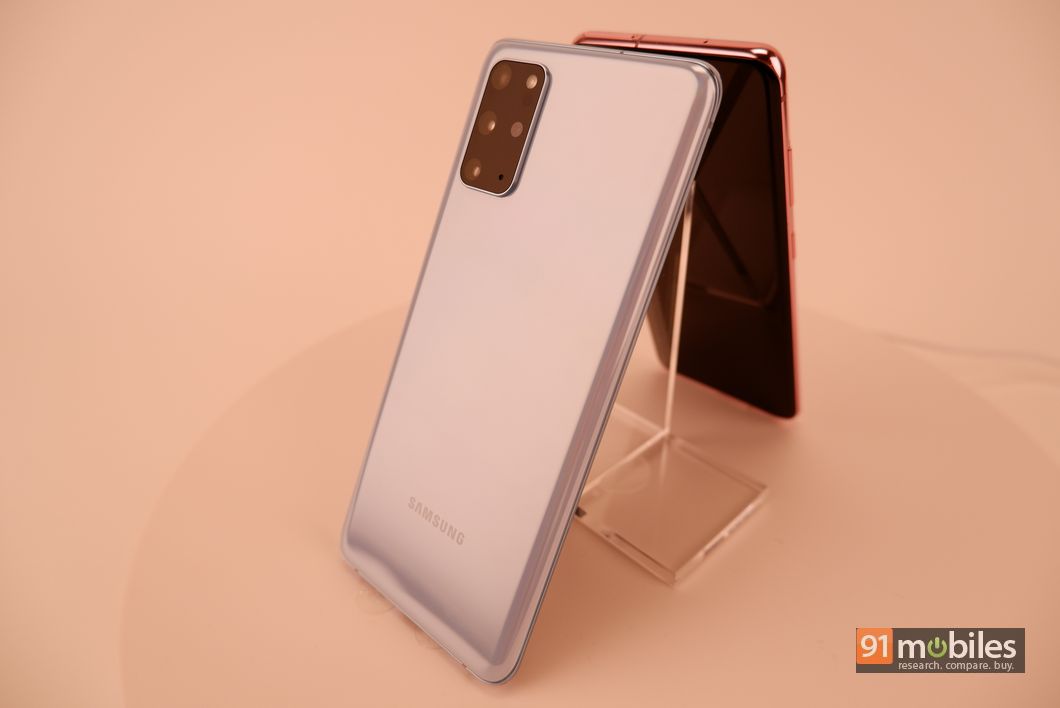 Samsung Galaxy S20+ has a quad-camera setup with an additional DepthVision sensor at the back – the remaining sensors remain the same as the Galaxy S20. For selfies and video chat, the Galaxy S20+ relies on 10MP (f/2.2) dual-pixel AF shooter on the front with 80-degree field-of-view. It runs Android 10-based One UI 2.0 out of the box and houses a 4,500mAh battery with 25W wired charging, along with wireless charging support. As for the dimensions, the smartphone measures 161.9 x 73.7 x 7.8mm and weighs 186 grams (188g for 5G mm-wave version).

Both the Galaxy S20 and its Plus sibling also feature Stereo Speakers and earphones powered by AKG and IP68 water- and dust-resistant rating.