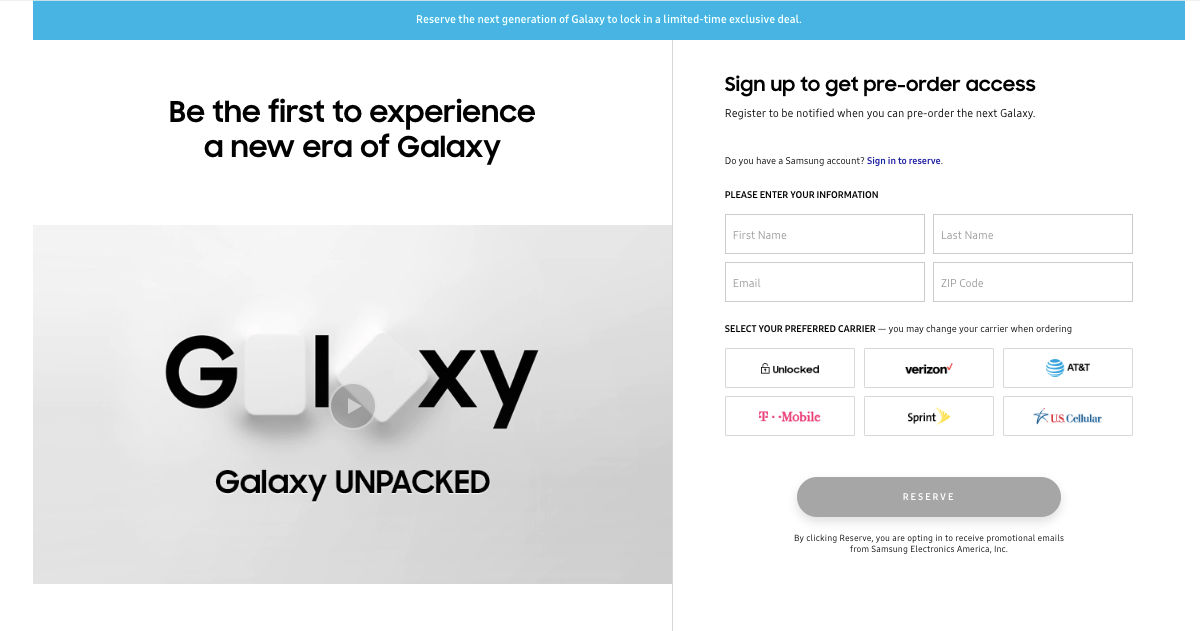 Samsung has begun the reservation process of upcoming flagship Galaxy S20 series ahead of its February 11th launch. Interested buyers in the US can now head to the company’s official website to book the handsets, which are said to include Galaxy S20, Galaxy S20+, and Galaxy S20 Ultra. The lineup is said to start shipping in the country from March 6th. The India launch and pre-booking dates of the Samsung Galaxy S20 lineup are yet to be announced. Users, however, can register their interest in “Next Galaxy” via Samsung.in in the country.

It’s worth mentioning that reservations do not guarantee a device during pre-order. It will only notify you when the handset will be up for pre-booking or sale. Samsung, however, is giving customers who reserve the Galaxy S20 line an exclusive $35 instant credit toward eligible devices and accessories.

Coming to the specifications, the Galaxy S20 series is expected to sport a centred punch-hole display, up to 120Hz refresh rate, in-display fingerprint scanner, and Snapdragon 865/ Exynos 990 SoC. The handsets may also come with up to 16GB RAM, 128GB base internal storage, and 1TB microSD card support. Software-wise, the Galaxy S20 series is expected to boot Android 10 OS with One UI 2.0 custom skin. The trio is also expected to rock IP68 water-resistant rating at around five meters.

The Galaxy S20 could sport triple rear cameras with 12MP + 64MP + 12MP sensors and a 6.2-inch WQHD+ display. The handset may be driven by a beefy 4,000mAh battery. Positioned above it will the Samsung Galaxy S20+, which is said to have a 6.7-inch screen, an additional 3D ToF camera, and a larger 4,500mAh battery. Lastly, the Galaxy Ultra 5G model with a 6.9-inch display, 108MP primary sensor, 40MP selfie camera, and a huge 5,000mAh battery. This model will also have 100x zoom and Space Zoom mode for astrophotography.