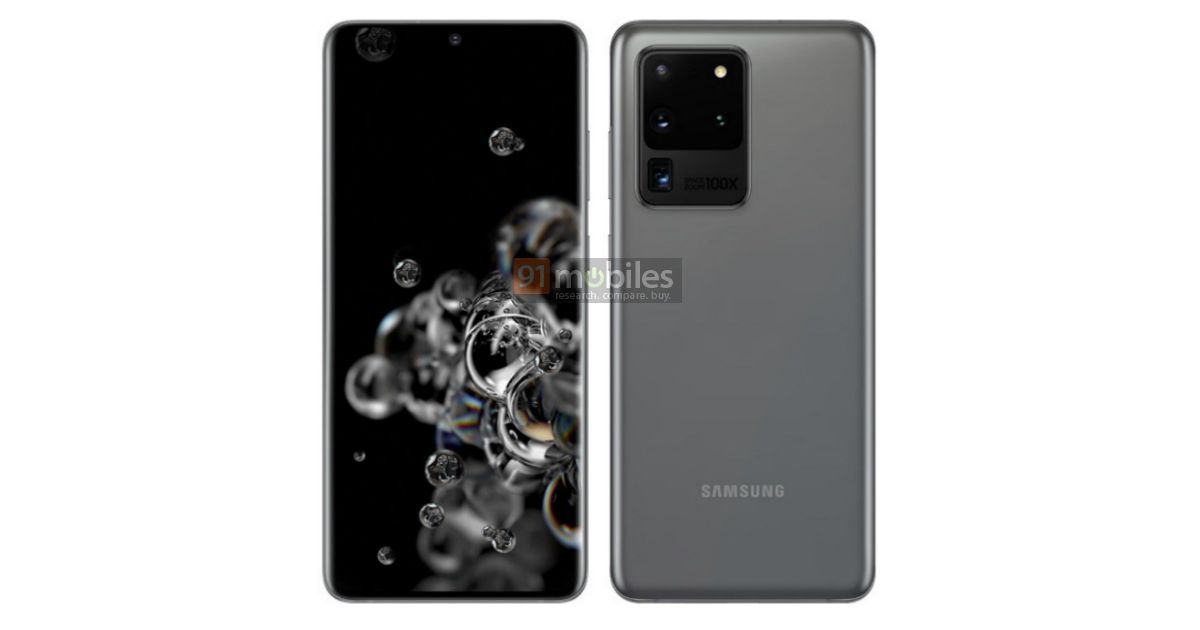 Samsung Galaxy S20 series is scheduled to be launched on February 11th and 91mobiles had exclusively published the renders of all the three models in series last week to reveal their designs in their full glory. Now, Max Winebach of XDA-Developers claims the Samsung Galaxy S20 Ultra, Galaxy S20 Plus, and Galaxy S20 will hit stores on March 6th and would have preinstalled screen protectors. He also says the foldable Samsung Galaxy Z Flip will become available to purchase on February 14th.

Just head from a new source:
Samsung’s Galaxy Z Flip will likely launch on February 14th. It retails at $1400. It’s possible it is an AT&T exclusive again, but this time it might be a timed exclusive. It will also be available unlocked.

As for the prices, the high-end Samsung Galaxy S20 Ultra is said to cost $1,300 (around Rs 92,800), while the Galaxy Z Flip will reportedly be priced at $1,400 (about Rs 1 lakh). The much-anticipated Galaxy Buds+ are tipped to cost $149.99 (roughly Rs 10,700) and are said to offer double the battery life compared to the original Galaxy Buds. These are also tipped to feature improved Active Noise Isolation but no noise cancellation.

All three models in the Samsung Galaxy S20 series are expected to feature centre-positioned punch-hole design, 2.5D curved display, and 20:9 aspect ratio. At least the Plus and Ultra models are tipped to feature 120Hz display. They are said to be powered by the Snapdragon 865/ Exynos 990, paired with up to 16GB RAM, 128GB base internal storage, and 1TB microSD card support. The trio is said to boot Android 10 OS with One UI 2.0 custom skin and expected to rock IP68 water-resistant rating at around five meters.

As for the differences, the Galaxy S20 will reportedly feature a 6.2-inch WQHD+ display, 12MP + 64MP + 12MP triple camera setup on the back, and 4,000mAh battery. Positioned above it will the Samsung Galaxy S20+, which is said to have 6.7-inch screen, an additional 3D ToF camera, and a larger 4,500mAh battery. Then there’s the maxed out Samsung Galaxy Ultra 5G model with a 6.9-inch display, 108MP primary sensor, 40MP selfie camera, and a huge 5,000mAh battery. This model will also have 100x zoom and Space Zoom mode for astrophotography.

While it’s not confirmed Samsung is expected to unveil the Galaxy Z Flip foldable phone on the same stage. The smartphone will feature a flip phone design, similar to what we saw on the Motorola razr 2019, with a 6.7-inch Flexible AMOLED panel made of flexible glass. It is said to be powered by the Snapdragon 855 SoC, feature a cutout to house a 10MP selfie camera, dual rear cameras, and support 15W fast-charging.