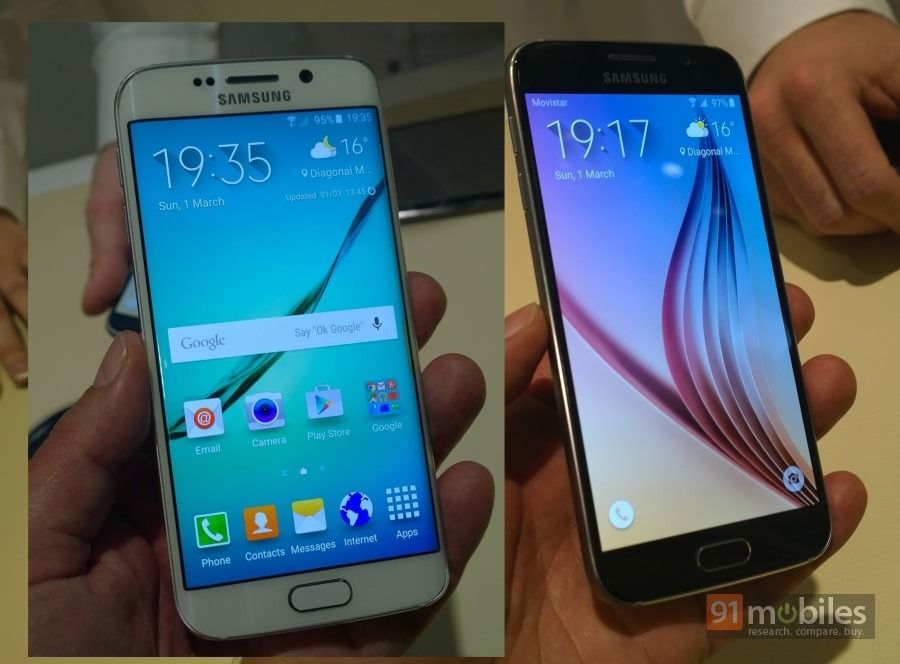 Samsung’s Galaxy smartphones are hated by some, but loved by many – clearly the reason why the Korean behemoth has managed to stay on the top of the charts on a global level. Market share is one thing… Samsung’s flagship S and Note series have also been high on the innovation scale, bringing improvements with each new iteration. These flagships have also racked up a loyal fan following, nearly matching the hysteria and cult status enjoyed by the iconic iPhones. The latest Samsung Note has been our favourite phone of 2014, running away with not one, but two awards. But we’re not talking about the Note today, no sir. Today’s all about the Galaxy S6 (and its sibling, the S6 edge).

Quite possibly the biggest, most awaited launches of MWC 2015, these devices have been the subject of many a rumour and leak. The rumour mongers can finally take a breather now, as the pair have gone official, and with the biggest launch done and dusted, this year’s MWC may just be over for some. We’re just getting started though, and a closer peek at the latest pair of S series flagships should help crank up the proceedings. 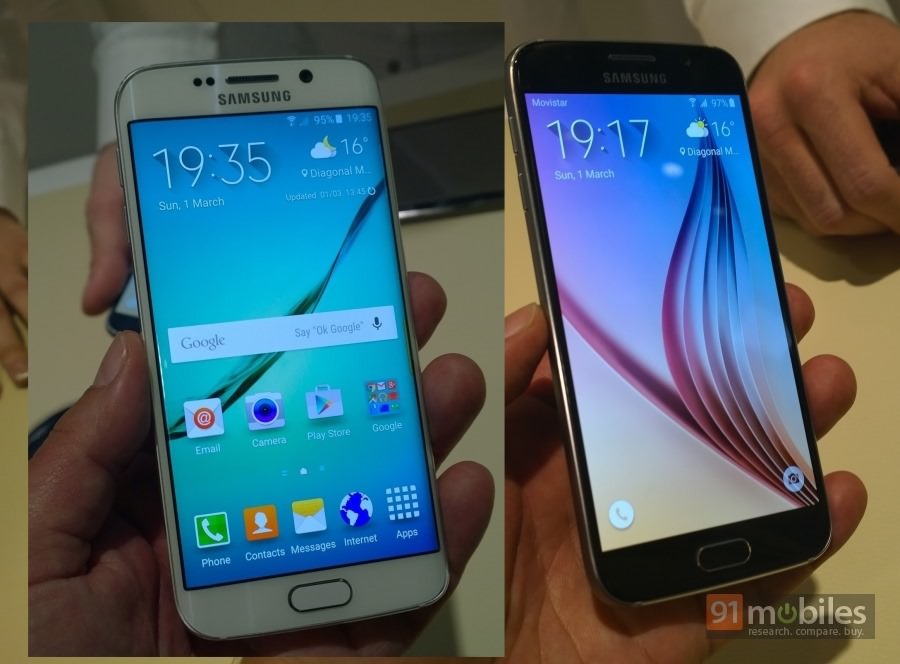 First up, let’s get a few things clear. The two siblings are exactly the same except for the screen. Secondly, while the edge moniker may elicit visions of the side panel that offered additional functionality on the Galaxy Note Edge, the S6 edge is essentially a smartphone with a screen that curves towards both sides… without offering any major additional capabilities apart from notifications. Therefore, it makes sense to cover them at one go, and we’ll be doing just that.

Samsung has a history of uninspiring and plasticky designs, but it started a significant shift with its metal-clad Galaxy Alpha (review) and carried the same to its new A series (first impressions) and E series as well. That design shift has now changed gears, moving up several notches to result in the S6 and the S6 edge. The bodies fuse meta and glass in a seamless, fluid manner, not too different from the way the Apple iPhones have done. 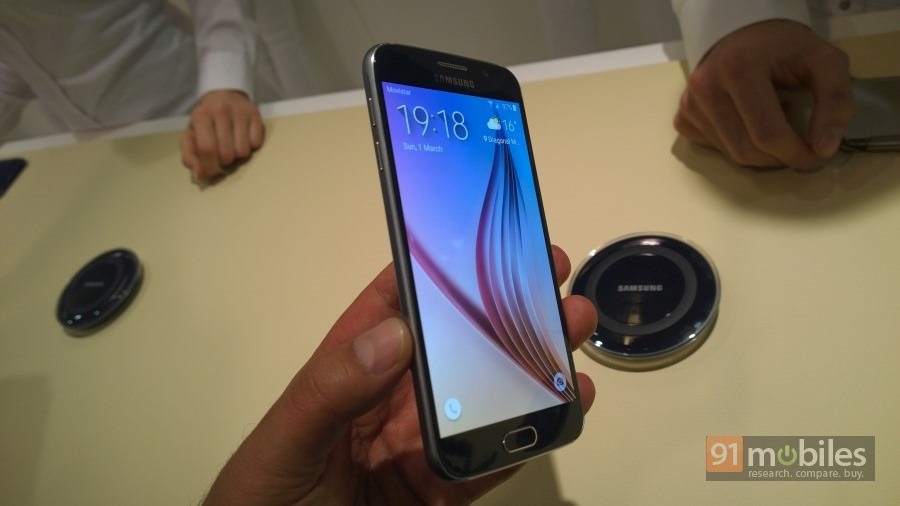 Talking about the S6 first, the fascia is still typically Samsung-esque, but there’s a distinct edgy feel to it, thanks to the metal frame. It feels lightweight, yet offers the reassurance only a well built device can. The rounded corners added to the metal do impart the S6 an iPhone-like look from the corners. The fascia holds the screen layered with Gorilla Glass 4, with Samsung branding on top, along with the usual mix of sensors, front camera and earpiece, with the oval-shaped physical home button (with an integrated fingerprint sensor) flanked by two backlit capacitive keys. 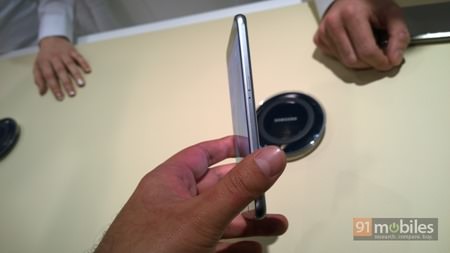 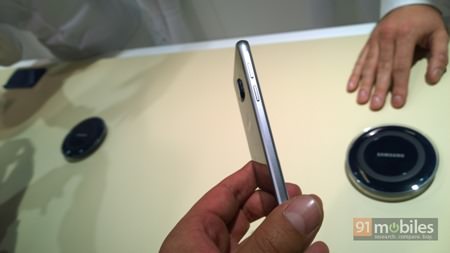 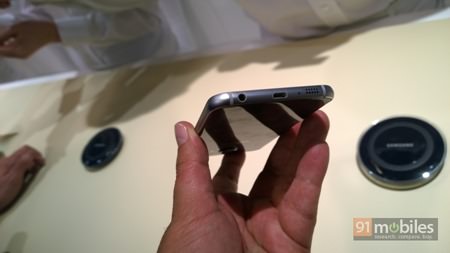 Up top, you’ll find an infrared blaster and the secondary microphone, while the micro-USB port, speaker and headphone socket are placed at the bottom. On the left spine, you’ll see two separate keys for controlling volume, while the right holds the power key along with an ejectable tray that accepts a nano-SIM. 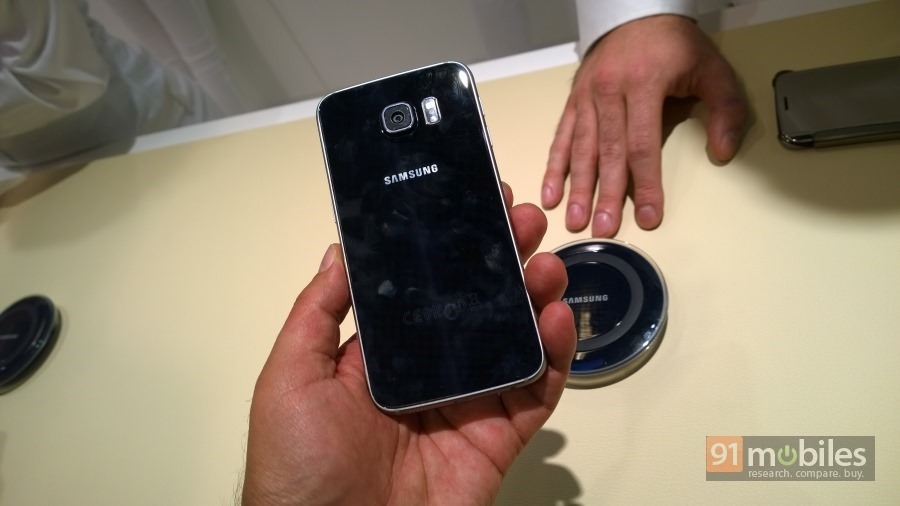 The back holds a protruding camera lens, next to the flash module that also includes the heart rate monitor and other sensors. The glossy rear (which is quite prone to smudges, as you can make out) is also protected by fourth generation glass. In another deviation, the S6’s 2,550mAh battery isn’t removable, and what’s more… there’s no scope of adding more storage as there’s no microSD card slot. You can opt for one of three storage variants instead – 32, 64 or 128GB. The battery supports fast charging and wireless charging too.

Underneath ticks an Exynos 7420 octa-core chip that comes with two quad-core clusters clocked at 2.1GHz and 1.5GHz, and there’s 3 gigs of RAM alongside. The combination results in buttery-smooth performance, at least as far as what we could make out in the brief time we spent with it. The 5.1-inch QHD screen looks quite scrumptious too. 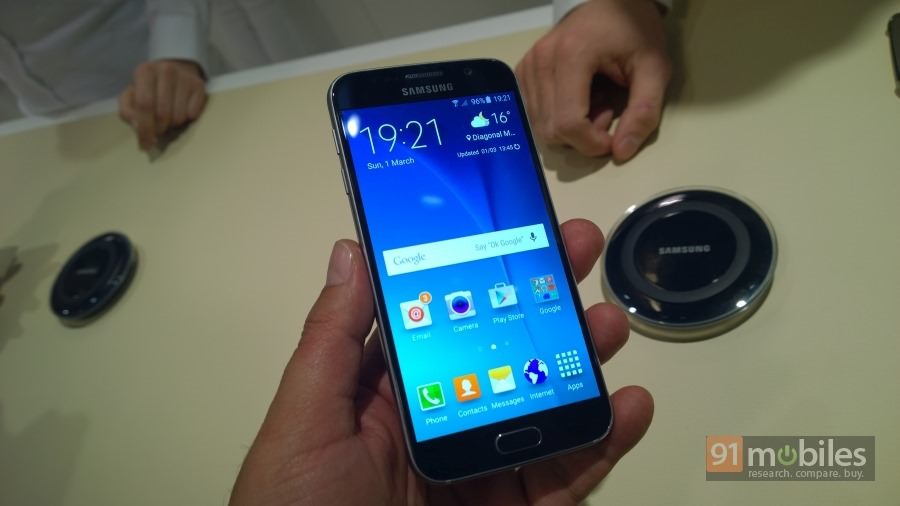 The photography department includes a 5MP front shooter that boasts real-time HDR and a 16-meg primary sensor at the rear that features optical image stabilisation. Both shooters come with f/1.9 apertures. Software-wise, the Galaxy S6 runs Android Lollipop, v 5.02 to be precise, and you’ll find Touchwiz on top as usual.

Our 32GB demo unit displayed about 23.5GB available, but then again, it was a demo handset so we’ll can only confirm this when we get our hands on a review device. 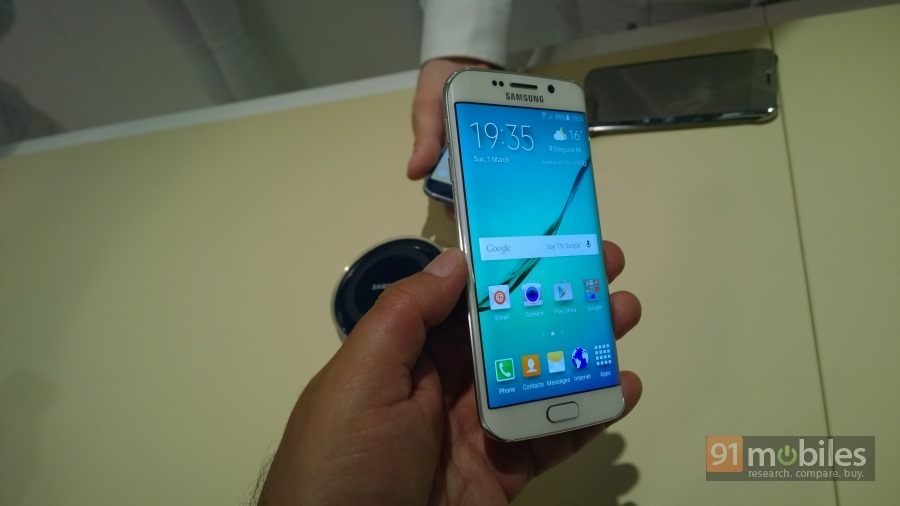 Moving on to the S6 edge, it’s pretty much the same as the S6 apart from one big difference, the screen that spills over towards both sides. Oh yeah, the battery is a marginally higher 2,600mAh pack, but it’s the screen that adds oodles to the design and looks, and also makes the phone quite comfortable to hold in the hand. 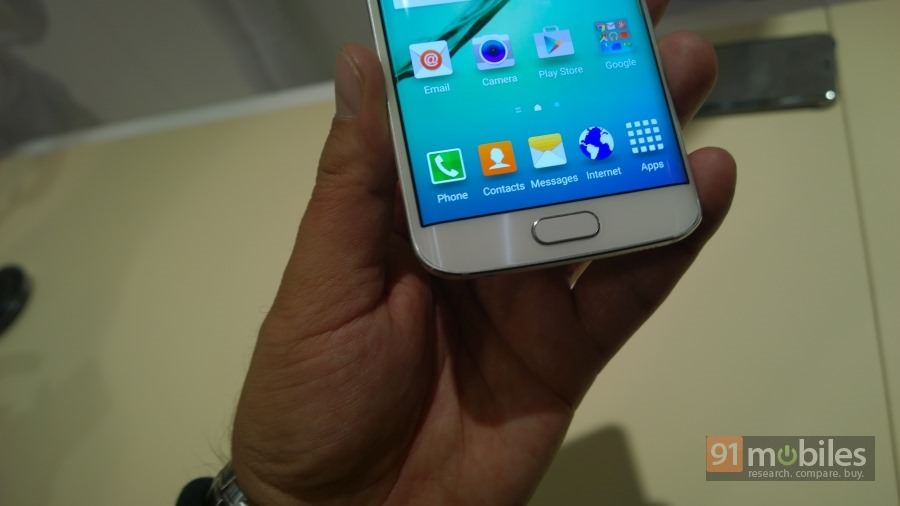 The nano-SIM slot has been moved up top, but otherwise the ports and control is the same as the S6. 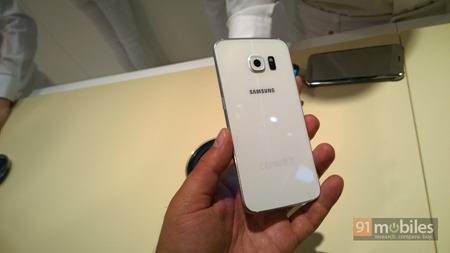 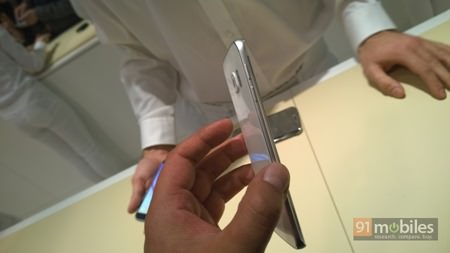 Samsung has also tweaked the software to let you assign different colours to five of your favourite contacts, making the sides of the device glow with the assigned colours whenever you receive a notification from them. This 64GB demo unit had about 53GB storage available to use, but just like its other sibling, was a treat to try out with its super-responsive touch and zippy operation. 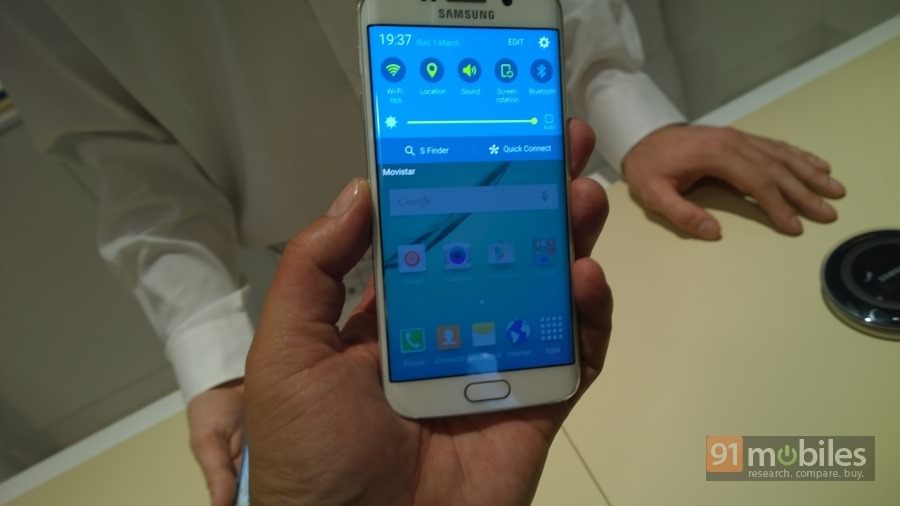 Whether or not the new S6 siblings manage to improve Samsung’s standing in the global smartphone arena, they sure rock impressive designs and specs. The Galaxy S6 edge could possibly be the best-looking phone from Samsung we’ve seen yet, and importantly, also feels great in the hand. April 10th is the date when Samsung’s promised to bring the pair to 20 countries, and though we aren’t sure if India’s in that list, based on our hands on experience, we sure hope so. We might change our minds when we get to know the price tags, but hopefully, Samsung will swing a surprise and price them aggressively. For now, we’ll just leave with a few more images of the S6 edge, just to make you drool. 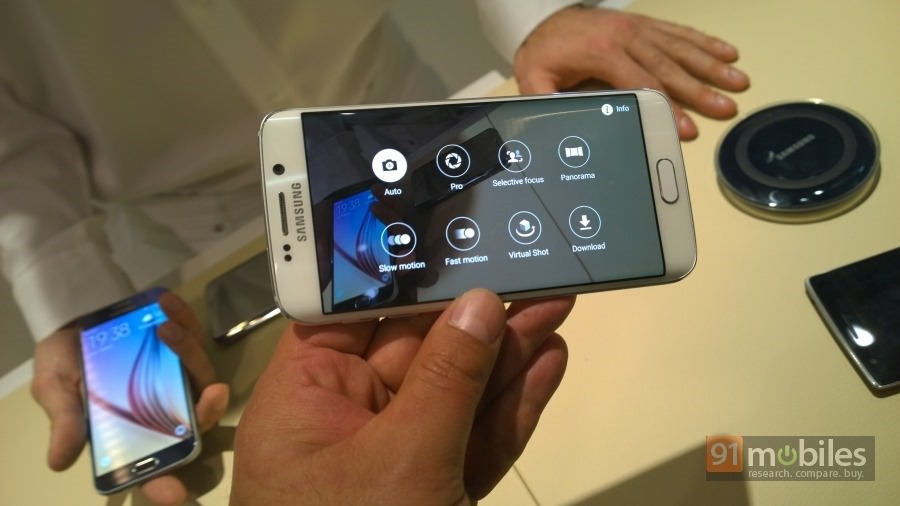 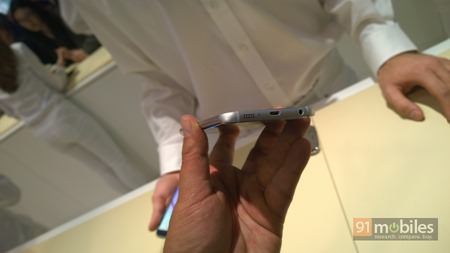 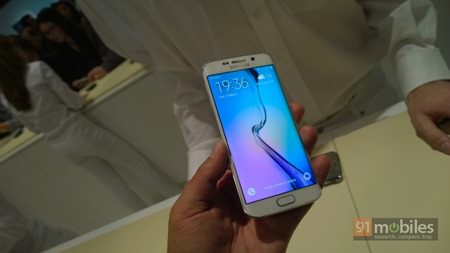