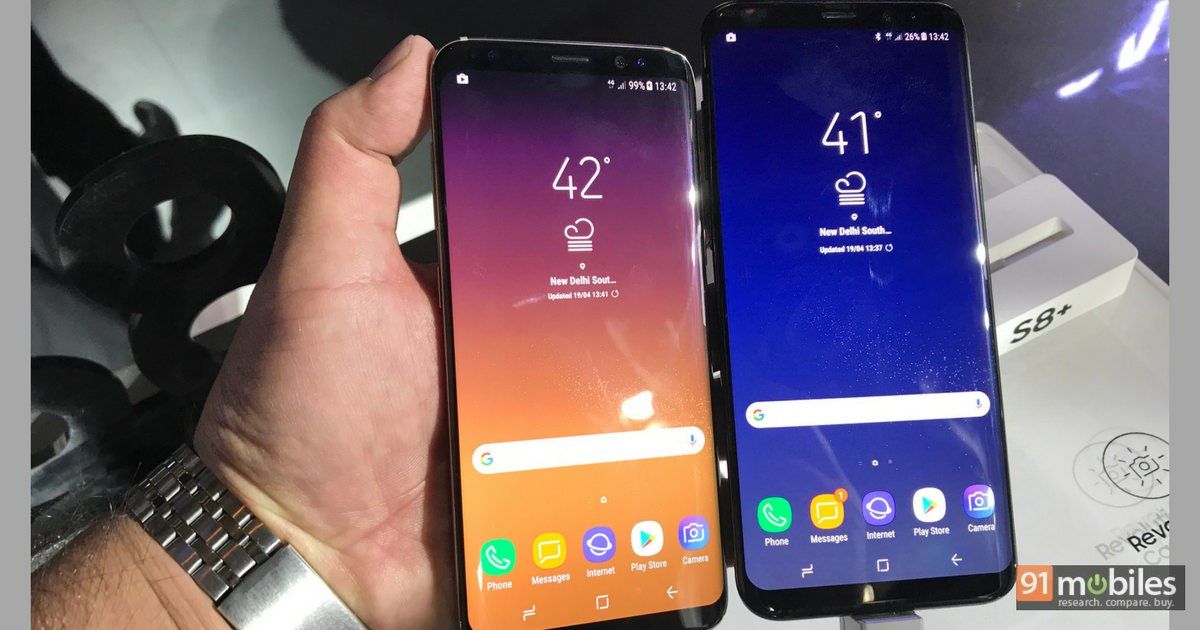 A lead actor in Bollywood is as good as his or her last movie, a batsman as good as his last innings. This holds true in the smartphone world too, especially when we’re talking about a top-tier brand like Samsung, and especially if it concerns its last big flagship. The Note7 debacle is fresh in our minds as we write this, and therefore, the latest and greatest from the Chaebol, the Galaxy S8 and Galaxy S8+ have a lot riding on their shoulders. The onus is upon them to make things right, so to speak, and ensure that Samsung can come out on top yet again by wowing the consumers with what they have to offer. 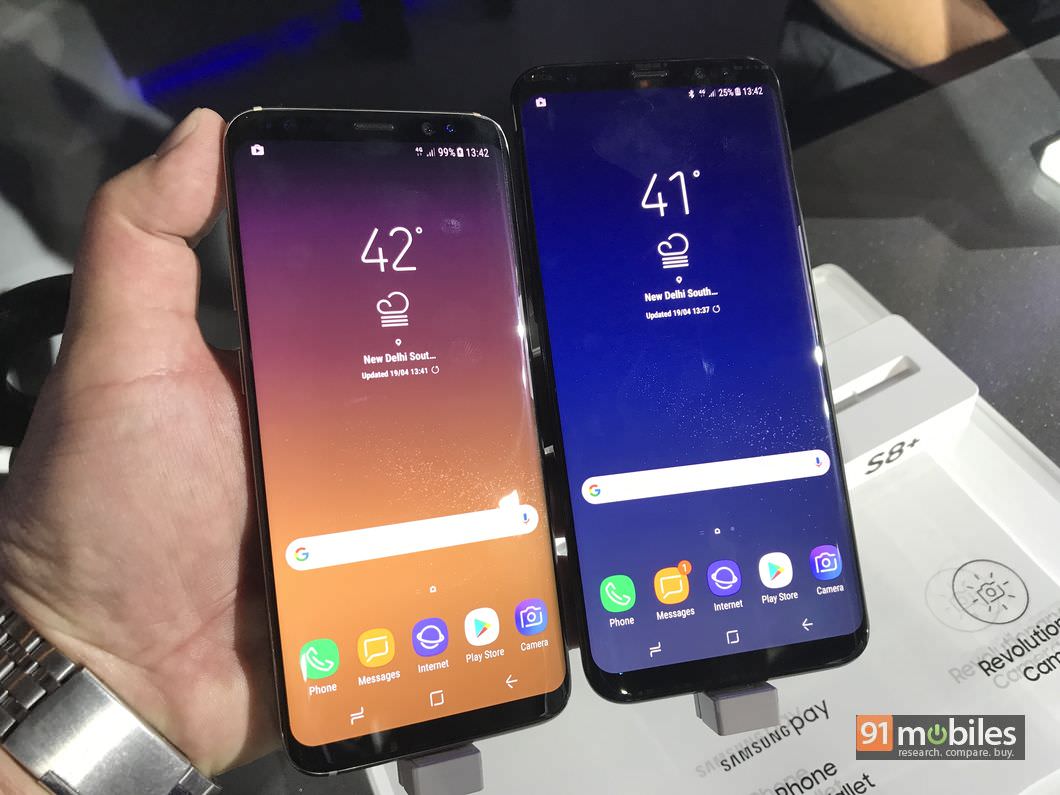 With the S8 and S8+, Samsung needed to perform a fine balancing act – stick to the tried and tested to be on the safer side, yet pack in enough oomph to wow the world. We’ve just had a chance to play with the new flagships briefly and we think Samsung might just have pulled it off. 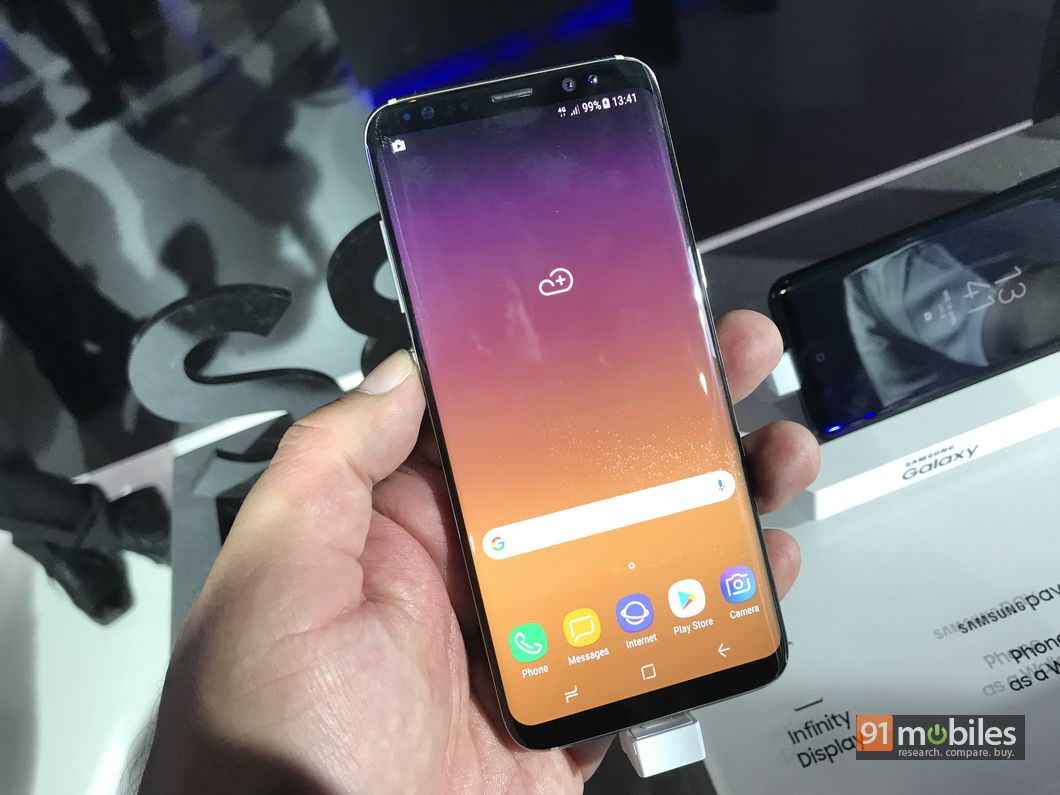 The oomph we referred to earlier, comes in the form of a radical new design, which basically gets rid of the bezels and helps cram in larger displays in relatively compact bodies. The screen-to-body ratio is insane, which means that the Galaxy S8 can pack in a 5.8-inch display (dubbed Infinity Display) in a body even smaller than a that of a regular 5-inch phone. Similarly, the S8+ packs in a 6.2-inch display in a body hardly bigger than a conventional 5.5-inch phone. The S8 and S8+ screens feel longer and narrower than the usual, and the brand has changed the screen aspect ratio to 18.5:9, somewhat like the upcoming LG G6. The design change means there’s no place for Samsung’s familiar home button / fingerprint scanner combo on the chin. To get around this, Samsung has moved the fingerprint scanner to the back, to the right of the camera module. The home button, and the navigation keys are now onscreen. The screens on both flagships are curved on both sides, much like the Galaxy S7 edge, and the construction is mostly glass (with a metal frame between the front and the back). We think you’d need to be careful and avoid dropping your S8 / S8+ at all costs, if you don’t want to risk scratches and dents… or worse, ending up breaking the screen.

To give you an idea of what the retail box contains, apart from the phone, you get a USB Type-C cord, wall charger, a pair of premium AKG earphones with spare rubber tips, a USB Type-C OTG adapter, and lastly, a Type-C to micro-USB adapter as well. 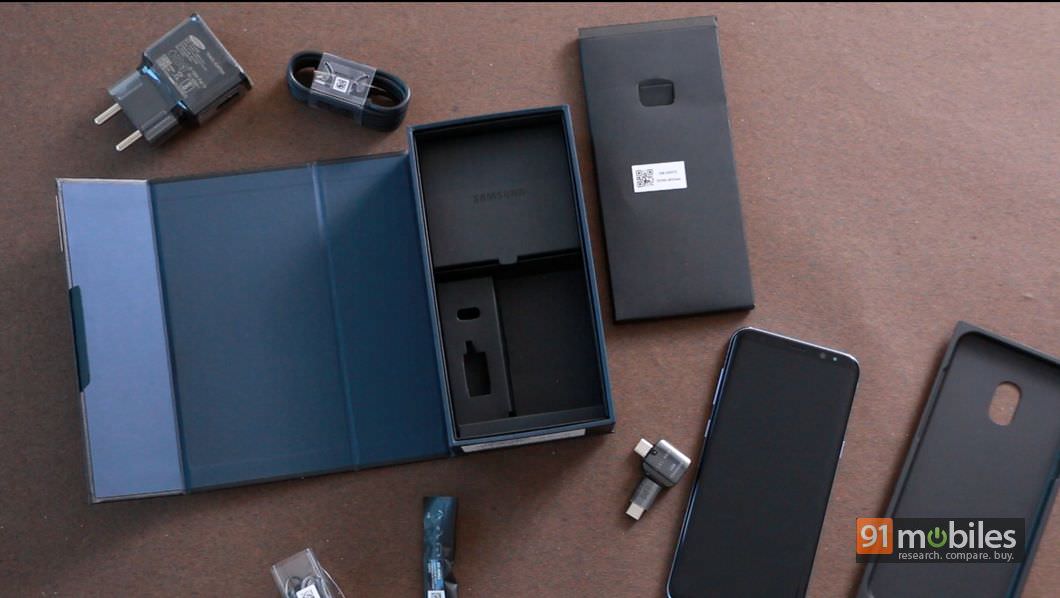 Interestingly, the Galaxy S8 duo are the first smartphones to come with Bluetooth 5.0. Apart from other advantages like improved range and faster transfer speeds, this new standard brings Dual Audio, a feature that lets you connect and use two pairs of Bluetooth headphones simultaneously.

The other biggie, or so we’re told, is Samsung’s new smart assistant labeled Bixby. This gets a dedicated hardware key on the left side of the smartphones, a button which can’t be customised to do something else. Bixby is currently in its nascency, and yet to get support for voice commands… a feature dubbed Bixby Voice. However, you do get Bixby Home and Bixby Vision. Bixby Home works just like Google Now cards, giving you contextual info, while Vision is like Google Goggles, giving you info on images you’ve shot, including details on landmarks etc.

Apart from the above though, the other aspects of the new flagships mostly stick to the norms, and come across as evolutionary upgrades. Horsepower is provided by an Exynos 8895 processor (that utilises 10nm fabrication process just like the Snapdragon 835), mated to 4 gigs of RAM and 64GB storage. Both devices are hybrid dual-SIM, so you have the option of adding a microSD card if you can get rid of your secondary SIM. You get a USB Type-C port, and thankfully, a dedicated 35mm audio port too.

While it’d not been unreasonable to expect significant improvement in the camera department (like a dual camera setup perhaps), the Galaxy S8 and S8+ seem to again take the safer route. So what you get is a 12MP f/1.7 camera with Dual-Pixel tech, which doesn’t seem massively better than the one we saw on the Galaxy S7 (review) and S7 edge (review), on paper at least. To give credit where it’s due though, the S7 / S7 edge cameras are still among the best we’ve seen on smartphones… so any improvement can possibly be just a marginal one, theoretically speaking. The 8MP front cameras on the new S8 and S8+ though, add autofocus to the mix… so we’re expecting some crisp and nicely focussed selfies from them.

The whole range of staple features that can be expected from a new Samsung flagship are all there – including IP68 waterproofing, always-on display, fast charging, wireless charging, support for Samsung Pay, Smart Stay, Game Launcher, support for Vulcan API that enhances the gaming experience, Multi Window, themes support etc. The iris scanner, last seen on the late Galaxy Note7, has also been thrown in. And since both phones have dual front curves, you also get the edge screen features seen on the S7 edge.

On the software side of things, you get Samsung’s custom skin which uses Android Nougat as base. The interface now looks sharper and uses crisper fonts. The Briefing news aggregator has gone, with Bixby Home occupying a dedicated panel instead. There’s no dedicated button to access the app drawer, and the installed apps can be accessed by swiping up (or down) on the home screen, just like the Pixel Launcher. 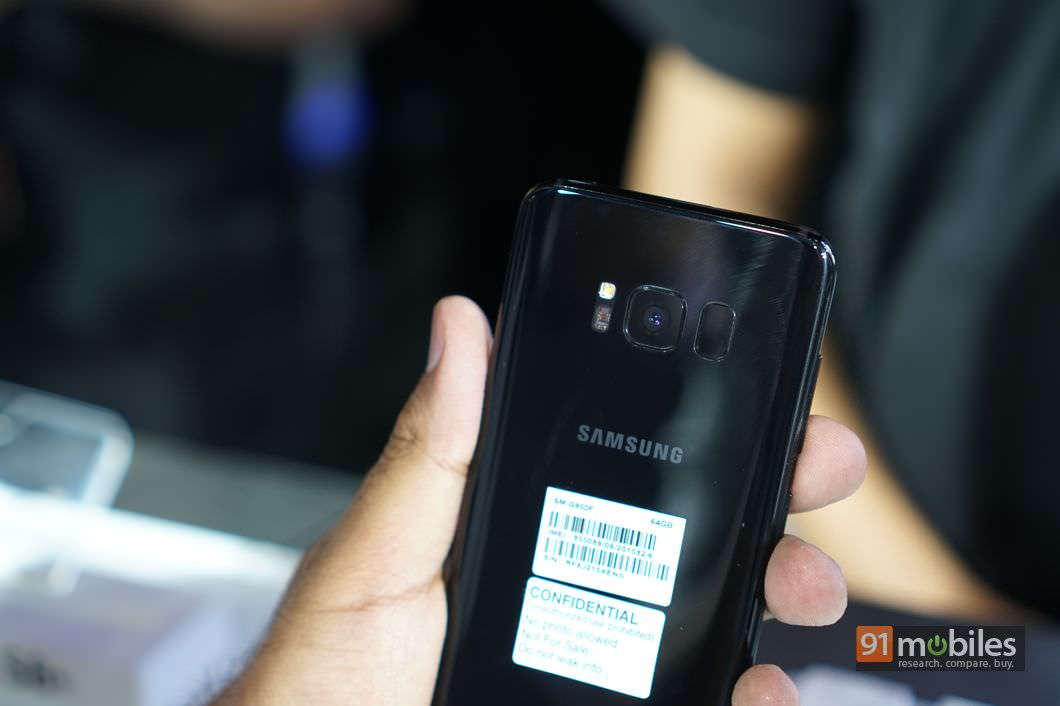 Our usage experience, based on the limited time we played with the phone, was top notch. The QHD Super AMOLED screen is a pleasure to use as always, and interestingly, lets you switch resolution to FHD or even HD if you want, to enhance battery life. The performance of the 3,000mAh battery in the S8, and the 3,500mAh pack in the S8+ is something we need to try out properly though, apart for gauging their overall performance as daily drivers, the capabilities of the cameras, and the other smorgasbord of features they offer.

For the asking price of Rs 57,900 and Rs 64,900 for the Galaxy S8 and S8+ respectively, it does seem like Samsung has priced them sensibly. As we mentioned earlier, there’s a lot riding on these two phones for the brand, and from what we can make out, the duo does offer quite a bit. It remains to be seen how explosive they turn out to be, and for Samsung’s sake, we hope they do end up setting fire to the sales charts (and not to their users and their belongings) – because we quite like the new pair.