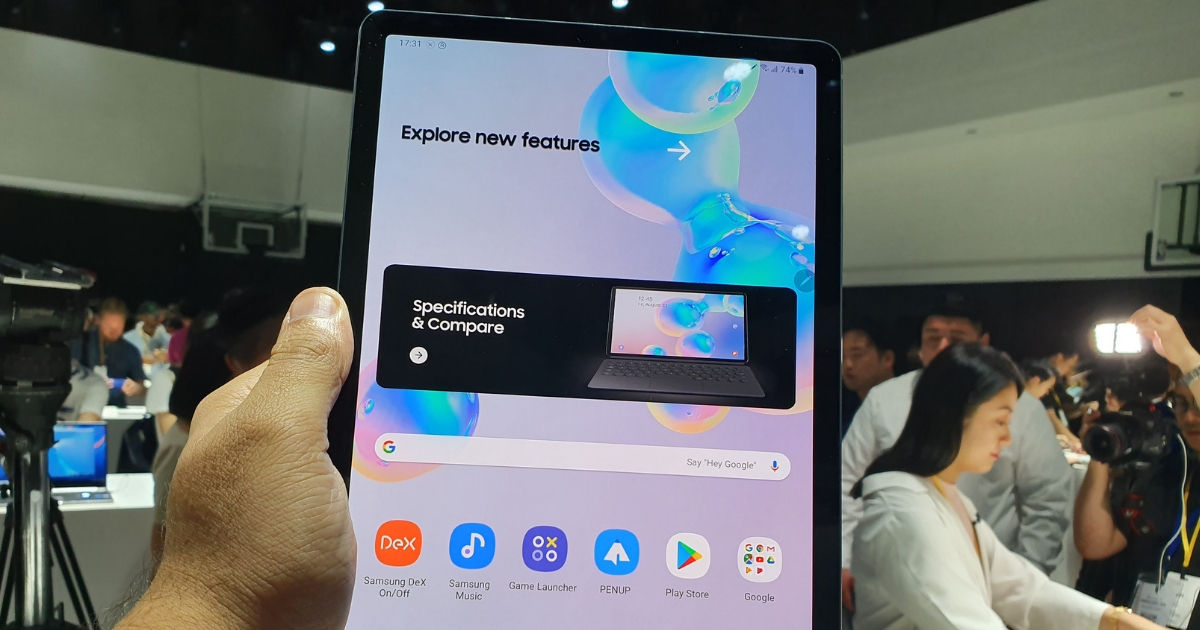 “The Galaxy Tab S6 is a powerful tablet with Qualcomm’s Snapdragon 855 processor, S Pen support and a 7,040mAh battery”

Tablets seem to have been in a rock and hard place. While many would have thought that they’ll be replacing laptops, smartphones have become bigger and better, and reduced the need of using a slate. However, it seems that tablet makers are now adapting, and trying to offer devices that are portable multimedia hubs, while also doubling up as work machines when needed, all thanks to the keyboard accessory. Samsung’s recently-announced Galaxy Tab S6 is a flagship tablet that also follows the same ideology. I managed to spend some time with the device at the Galaxy Unpacked event in New York, and here’s how I’ll sum up my initial experience. 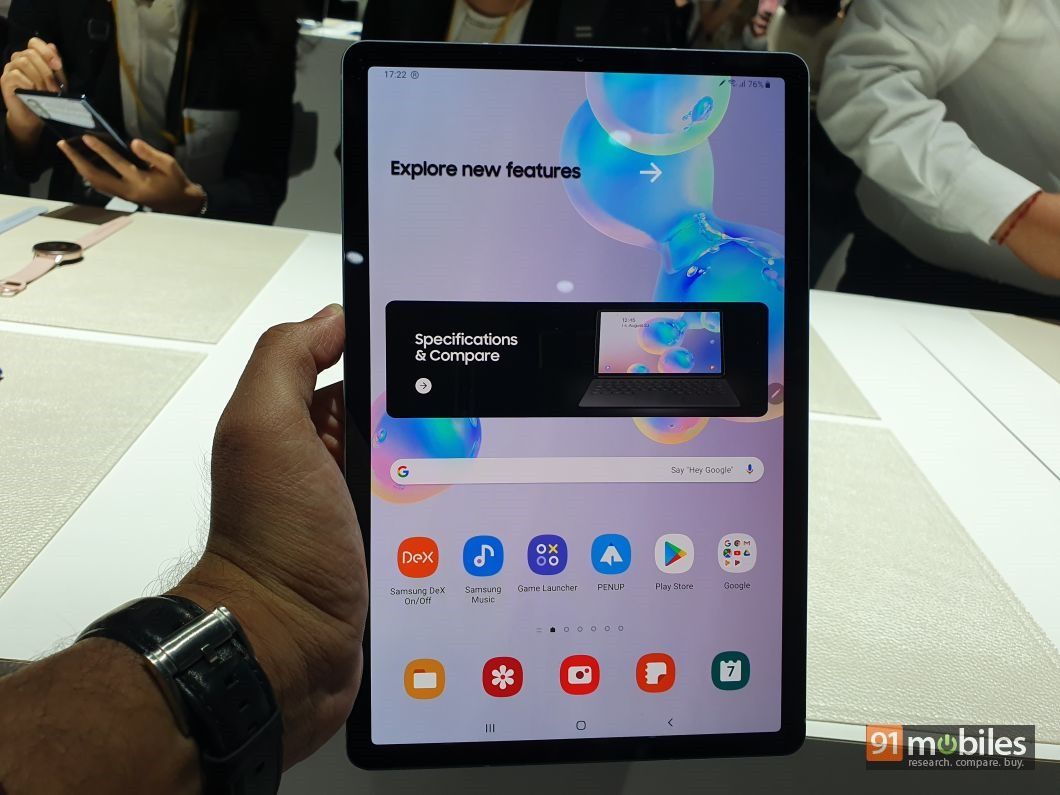 The Samsung Galaxy Tab S6 is a large device, all thanks to its dominating 10.5-inch screen on the fascia. While the phones have been offering higher screen-to-body ratios, a similar revolution is yet to take place in the tab segment. That’s why you’d notice relatively thick bezels around the panel on the Tab S6. Having said that, the device is slimmer than most phones out there, with a frame measuring 5.7mm. It’s also quite lightweight, as it tips the scales at 420g. 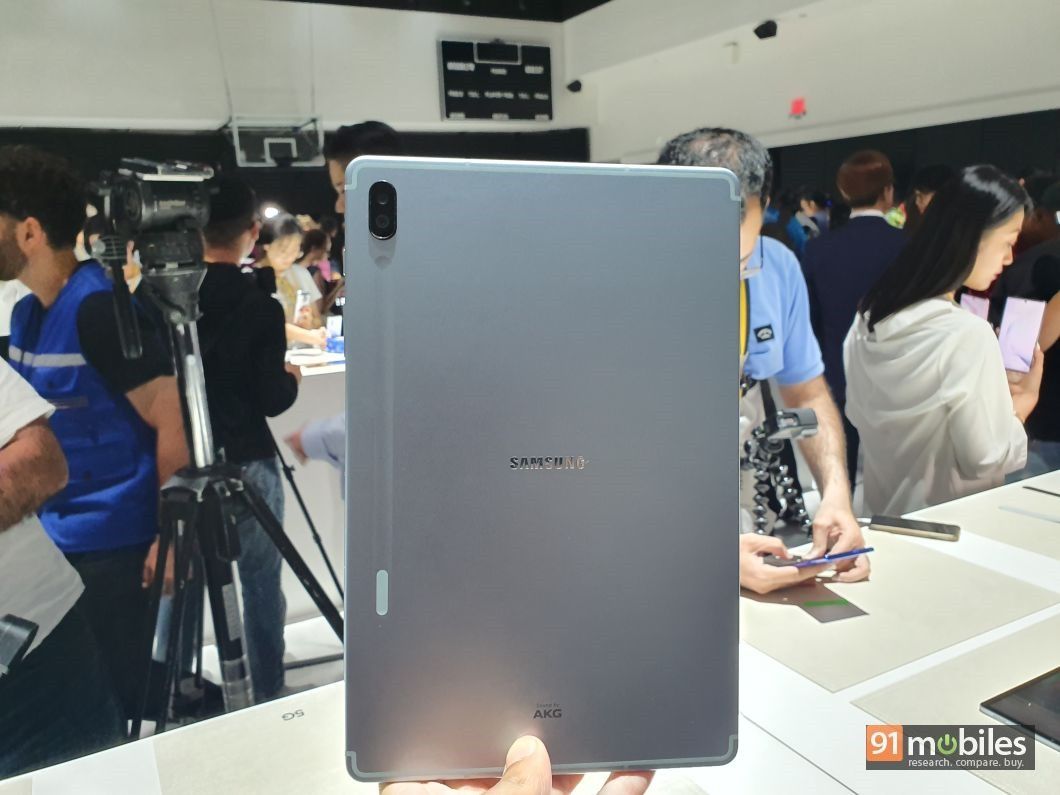 Built out of aluminium, the Galaxy Tab S6 strikes a perfect balance between style and robustness. In terms of buttons, you’ll find the power button and volume rocker on the right edge. Sadly, just like the newly-launched Note 10 duo (first impressions), the slate misses out on a 3.5mm headphone socket. The device does however, come with AKG-tuned quad speakers to provide good multimedia experience. Similar to the Note series, the Tab S6 also ships with an S Pen, but instead of a silo, there’s a cavity at the rear for the accessory to be attached magnetically. That also charges the stylus wirelessly.

As mentioned above, modern tablets are coming with the ability to connect to keyboards to turn into an on-the-go work machine. For that, the Galaxy Tab S6 features pogo pins on the left side, though you’ll need to buy the keyboard accessory separately. Samsung also highlighted the fact that the TypeCover now comes with a dedicated trackpad.

The 10.5-inch panel on the Samsung Galaxy Tab S6 offers a resolution of 2,560 x 1,600 pixels, ensuring crisp text and impressive visuals. Of course, the AMOLED tech offers deep blacks, making it all an ideal device for watching multimedia on the go. Then there’s support for HDR 10+ standard. Thanks to quad stereo speakers, the device promises loud sound output as well. 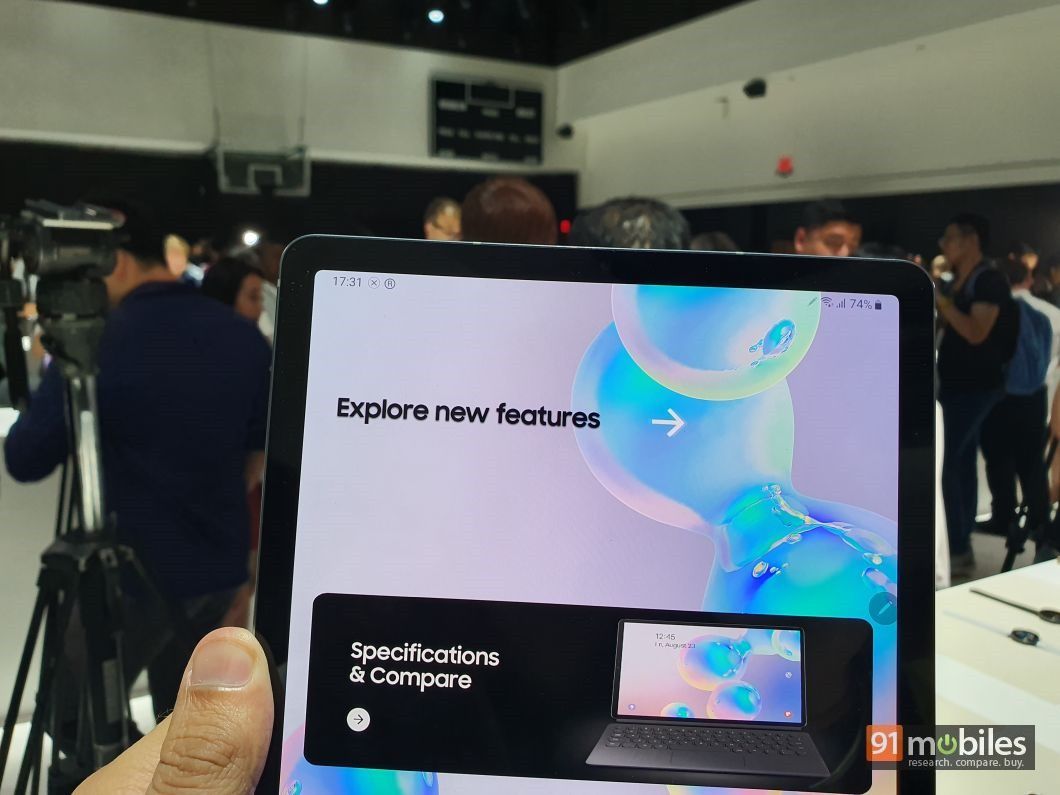 Inside the Galaxy Tab S6 runs the Snapdragon 855 SoC. The 7nm chipset features eight cores and is clubbed with 6GB or 8GB RAM. Depending upon the RAM option, the device is available with 128GB or 256GB memory onboard. You can also expand the storage further by using a microSD card. 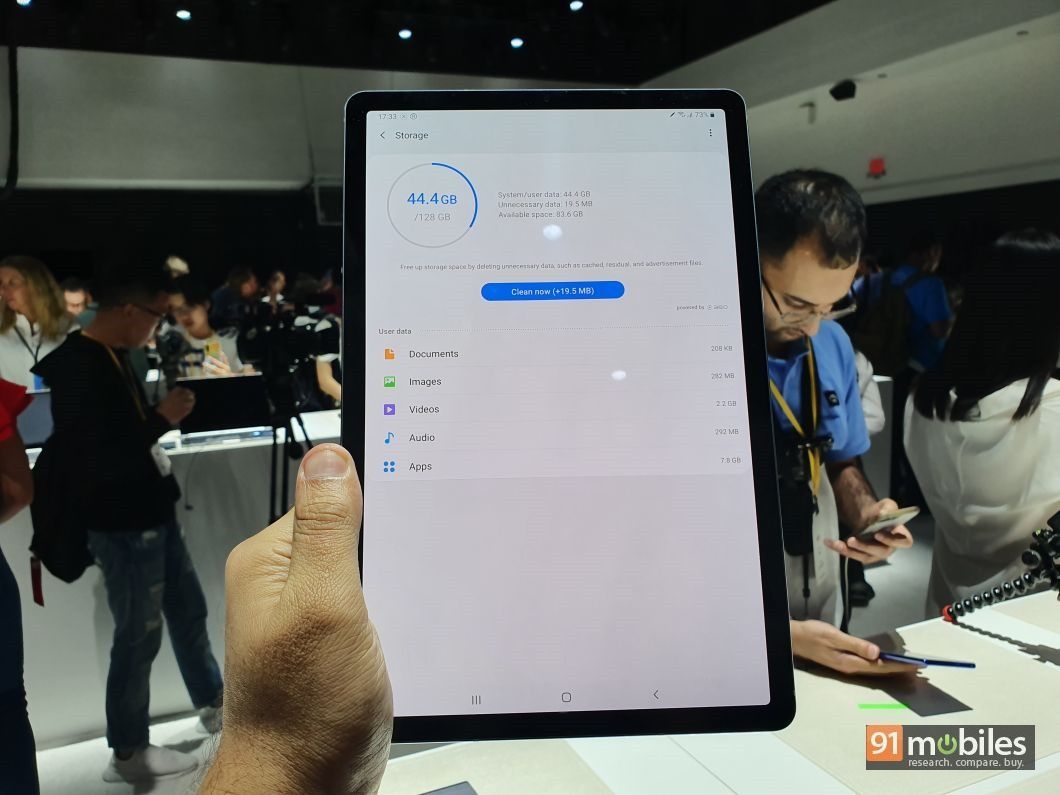 While it’s hard to believe that tablets could be used for shooting photos and videos, if you have visited tourist spots, you’d have certainly seen people doing that. That’s why, Samsung’s Galaxy Tab S6 flaunts dual cameras on the back with a 13-megapixel primary shooter and a 5-megapixel ultra wide-angle sensor. For selfies and video calling, there’s an 8MP snapper up front. 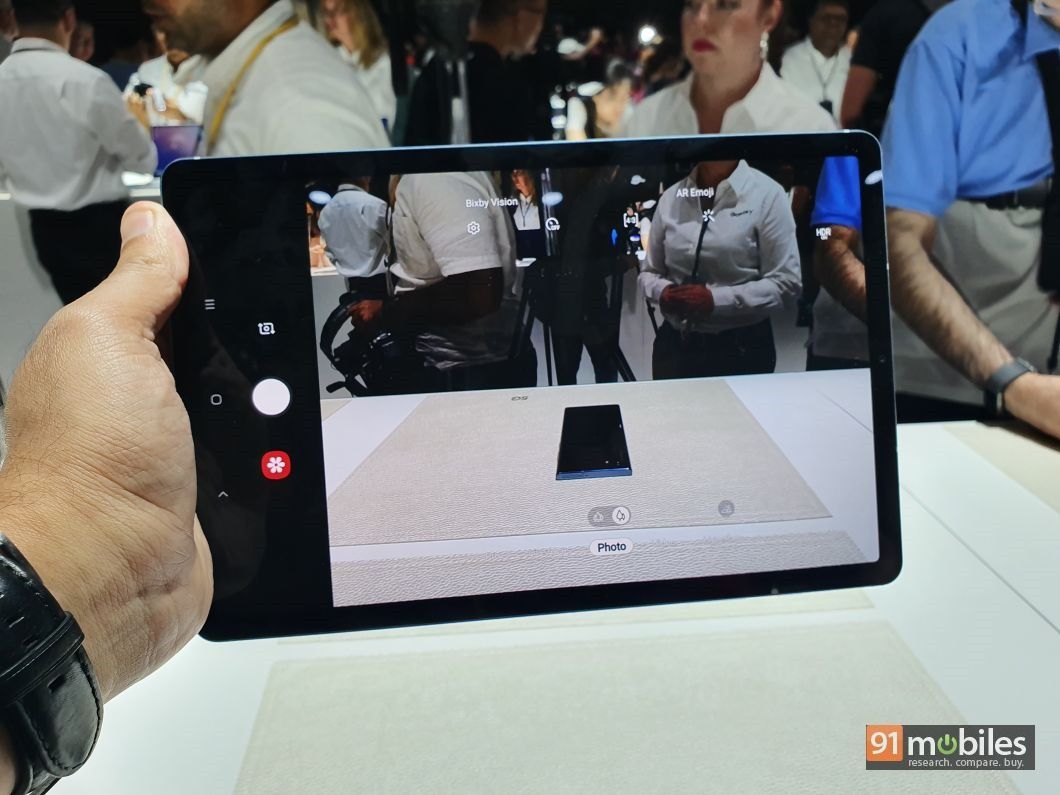 On the software side of things, the Tab S6 ships with OneUI, which is based on Android 9.0 Pie. The tablet also comes with an ultrasonic fingerprint sensor, which works quite well. Powering the entire package is a 7,040mAh battery that comes with 15W fast charging support. 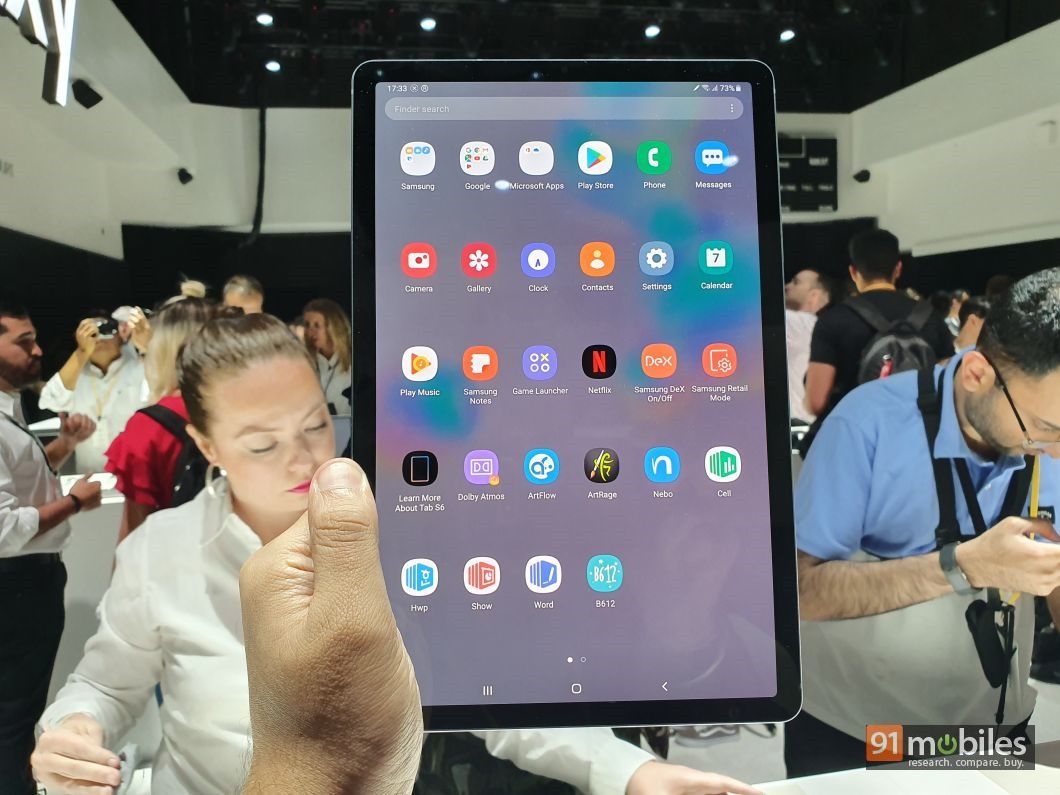 The Samsung Galaxy Tab S6 price starts at $649 (~ Rs 46,000), and for the price, seems to be ticking the right boxes while seemingly offering strong competition to arch-rival iPad. However, there’s no information if and when the slate would be landing in India. That said, we’ll let you know as soon as there’s any update on that front.