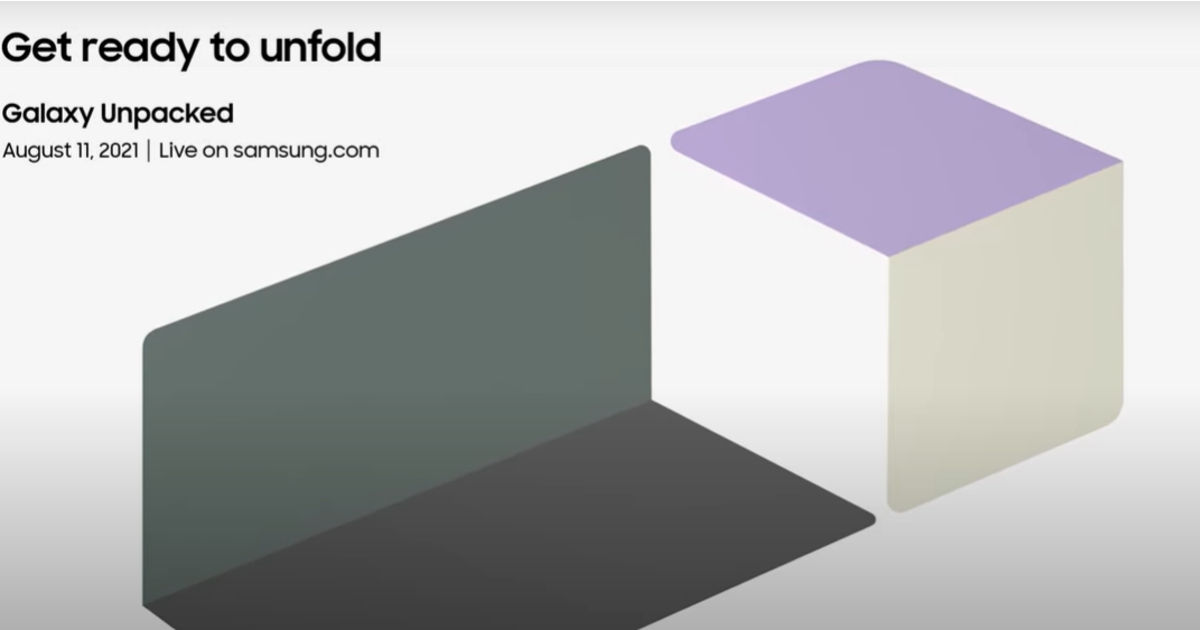 The Galaxy Unpacked 2021 event date, when Samsung launches its next big smartphones, has been officially announced by the company. The event will be live-streamed on Samsung Newsroom and Samsung website on August 11th at 7:30pm IST. The official teaser video clip is a big giveaway of what’s about to come — the left side phone could be the Galaxy Z Fold 3 which folds inwards, while the right side one will be the Galaxy Z Flip 3 as it folds in the half. Additionally, the South Korean giant is also expected to unveil Galaxy Watch4/ Watch Active4 smartwatch and Galaxy Buds2 wireless earbuds at the Galaxy Unpacked 2021 event. The phones and wearables should be on sale in India soon after their global availability.

Though the company was initially expected to launch the Samsung Galaxy S21 FE at the event too, the phone has now been pushed back indefinitely owing to the global semiconductor shortage. We can only hope the handset launches before the end of this year. Speculations are also rife the South Korean giant may introduce a new Exynos chipset at the Galaxy Unpacked event, with rumours from earlier this year suggesting that it will be the first chipset with AMD Radeon GPU. There are chances we might hear an update about it at the event but can’t be said for certain just yet.

Additionally, Samsung is also expected to introduce new GalaxyBook laptops at the event and these may come with an AMOLED display. That’s pretty much everything we should see at the Galaxy Unpacked event but there are chances the South Korean giant might surprise us with a secret product announcement. Thanks to various leaks and rumours, we already know quite a good deal about the Galaxy Z Fold 3, Z Flip 3, Galaxy Watch4 and Galaxy Buds2, but we have to wait for the launch to know their prices and availability details.

What will be missing from the Galaxy Unpack event this time, though, will be the 2021 Note model. Samsung has announced earlier this year that no Galaxy Note smartphone will be launched this year, again, due to the global semiconductor shortage. However, that doesn’t mean the series is dead just yet — the next-gen Note model will be launched in 2022. And for those who really miss the stylus, Samsung has the Galaxy S21 Ultra 5G with S Pen support in its 2021 flagship lineup.

RedmiBook Pro vs Mi Notebook Horizon Edition: Which Xiaomi laptop is better for you?