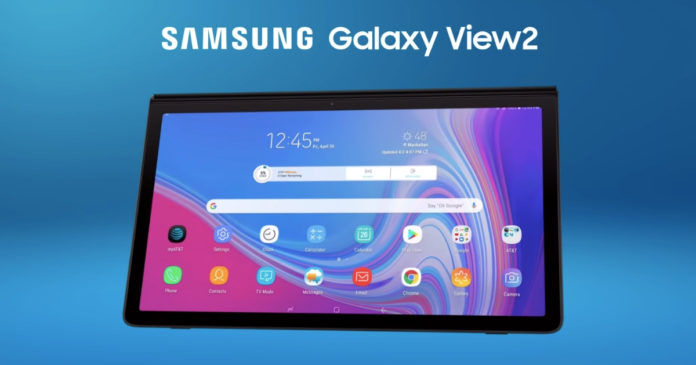 “Samsung Galaxy View 2 ships with a 17.3-inch display that is aimed at replacing your laptop”

Just a day after the Samsung Galaxy View 2 renders made their way to the internet, AT&T has revealed the key specifications and features of the tablet. Although the first generation Galaxy View was not a memorable device as such, the new Galaxy View 2 seems set to bring in some notable refinements over its predecessor. Described as a “4G LTE-connected mobile TV” and “large screen tablet,” the Galaxy View 2 aims at offering a massive display with an improved portability factor in comparison with a laptop. Of course, there is no official announcement regarding the device yet from Samsung’s side. Check out the video below:

To recall, the original Galaxy View packed a massive 18.4-inch display. With the Galaxy View 2, Samsung has shrunk the size down to 17.3-inch, which should improve portability. The display on the large screen tablet ships with a full-HD resolution. The View 2 can be used with a kickstand in a tent mode or as a tablet as well. The device runs Android and comes with 64GB of built-in storage, which is expandable up to 400GB via a microSD card. There is a 12,000mAh battery to fuel the device through the day. 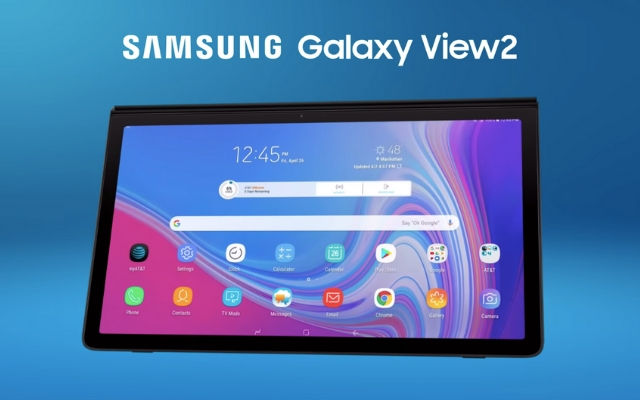 Although AT&T doesn’t mention details on the processor and amount of memory packed in the Galaxy View 2, an earlier Geekbench listing showed the tablet will ship with Exynos 7885 SoC, paired with 3GB of RAM. Interestingly, the Galaxy View 2 also packs quad-speakers with Dolby Atmos support for the improved multimedia-viewing experience. The Galaxy View also comes with a dedicated TV Mode that allows users to access DirecTV Now, AT&T’s online TV streaming service.