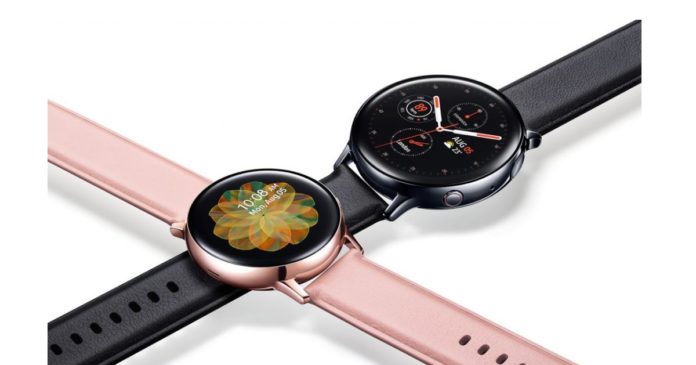 Samsung Galaxy Watch Active2 has finally been officially launched by the company. The smartwatch has arrived as the successor to the Galaxy Watch, which was announced in February this year. The new wearable from the South Korean tech giant brings back the rotating touch bezel. The new bezel isn’t physically rotatable, instead, there’s a black bezel that’s touch-sensitive and it lets you scroll through the different screens and menus on the smartwatch when you run your finger over it. Notably, the Galaxy Watch Active2 emits a click-like haptic buzz as you move your finger over the touch-sensitive bezel, which simulates the clicks of the physical wheel.

The Samsung Galaxy Watch Active2’s price starts at $279 (~Rs 19,700) for the 40mm variant, which goes up to $469 (~Rs 33,150) for the LTE 44mm stainless steel model. The smartwatch will be available to pre-order from August 23rd in Europe, and will go on sale from September 13th. In the US, the device will go on sale from September 27th. There’s no word on the wearable’s availability in other markets at the moment.

The Galaxy Watch Active2 comes with improved heart rate monitor and accelerometer. This is the first smartwatch by the company to support real-time pace coaching through Samsung’s Bixby virtual assistant. The wearable also features an ECG sensor, a Gyroscope sensor, a Barometer sensor, and an Ambient light sensor. The device is capable of tracking more than 39 workouts, and seven of them are automatically activated including running, walking, cycling, swimming, rowing machine, elliptical machine and dynamic workouts.

The Galaxy Watch Active2 comes in two sizes – 40mm and 44mm with the former offering a 1.2-inch screen, while the latter providing a 1.4-inch display. Both offer Super AMOLED always-on screens with a resolution of 360 x 360 pixels and a layer of Corning’s Gorilla Glass DX+. The 40mm variant sports a 247mAh battery, while the 44mm model is fitted with a 340mAh power cell. The smartwatch’s Wi-Fi variants have 768MB of RAM and 4GB of storage, while the LTE models come with 1.5GB of RAM and 4GB of storage.

The Samsung Galaxy Watch Active2 has been equipped with IP68 and MIL-STD-810G certifications for an extremely rugged body. Lastly, powered by the Tizen platform, the wearable is compatible with devices running Android 5.0 or higher or iOS 9.0 or above.