“Both the Galaxy Jean2 and Wide4 come with Exynos 7884 SoCs, dual rear cameras and ship with Android 9.0 Pie”

Samsung has introduced the Galaxy Jean2 and Galax Wide4 smartphones in its home country, South Korea. These are the rebranded Galaxy A20e and Galaxy A20 handsets that were already launched in some parts of the world. The brand has also introduced the Galaxy Jean2 as a Europe-exclusive model. Both the affordable phones come with Exynos 7884 SoCs, pack waterdrop-style notch to accommodate the selfie snapper and run Android 9.0 Pie with OneUI skin on top. 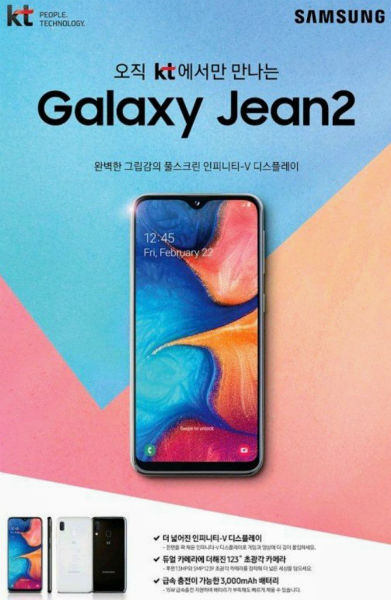 The Galaxy Jean2 is priced at KRW 253,000 (about Rs 14,900). It’s available through KT offline and online stores. However, details regarding Galaxy Wide4 aren’t revealed yet. The devices are available in Black and White options.

The Samsung Galaxy Jean2 sports a 5.8-inch HD+ Infinity V display with a resolution of 720 x 1,560 pixels. While the Galaxy Wide4 has a relatively large 6.4-inch HD+ Super AMOLED Infinity V display. Both the handsets are powered by the Exynos 7884 octa-core SoC clocked at 1.8GHz, paired with 3GB RAM and 32GB of expandable storage. The phones boot One UI based on Android 9.0 Pie out of the box.

As for the optics, the Galaxy Jean2 and Galaxy Wide4 pack dual rear cameras consisting of a 13MP primary shooter with f/1.9 aperture and a 5MP secondary wide-angle lens. There is an 8MP shooter up front for selfies and video chats. Connectivity features include Wi-Fi, Bluetooth, GPS, and a micro-USB port. While the Jean2 ships with a 3,000mAh battery, the Samsung Galaxy Wide4 packs a beefier 4,000mAh battery. Both handsets come with support for 15W fast charging. For security, the devices feature a rear-mounted fingerprint sensor.