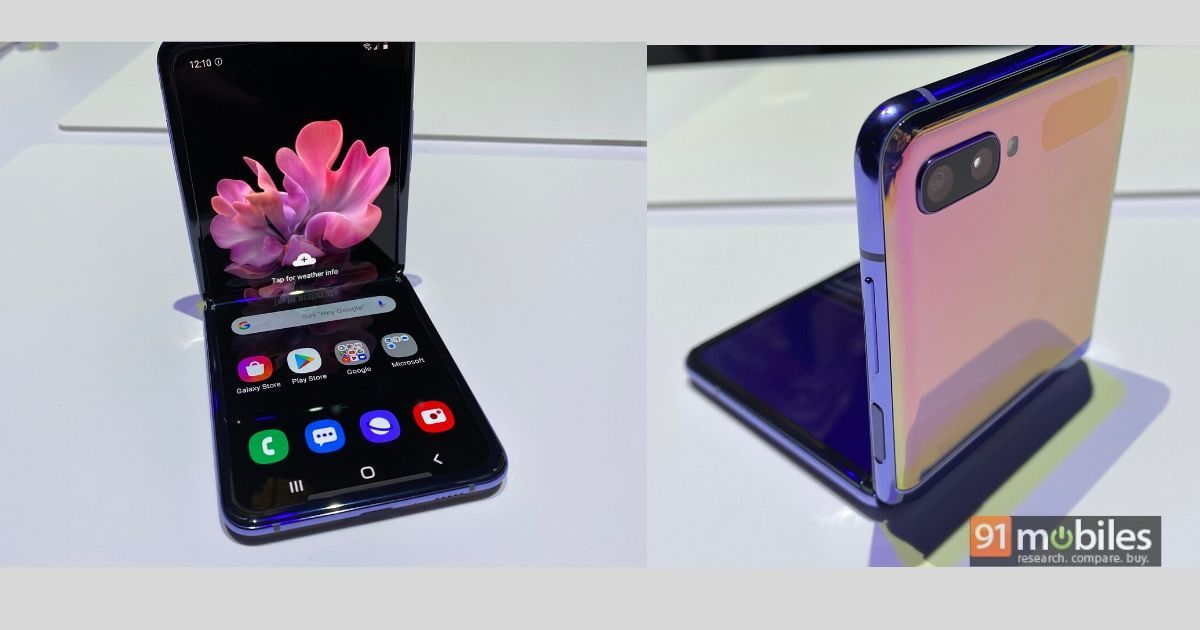 Foldable smartphones have moved on from being mere concepts to real, commercially-available devices one can buy and use. And Samsung has played a big role in that, thanks to the Galaxy Fold that launched last year. Of course, there’s Huawei’s Mate X (which went on sale in China in November, but is yet to land in India), and also the new Moto Razr, which is due to be launched in India very soon. Many other brands, like Xiaomi for instance, have also showcased prototypes of their own versions of foldable phones. Samsung however, is ready to move to second generation. Welcome the Galaxy Z Flip. 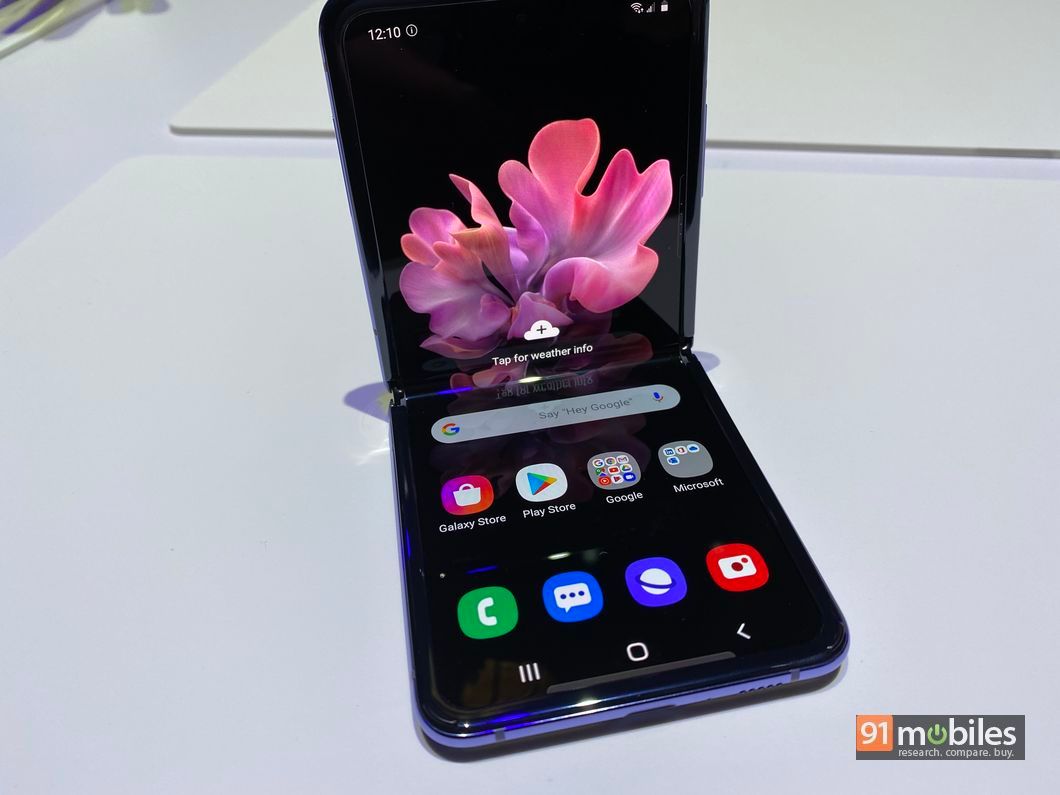 This clamshell foldable phone has popped up in rumours and leaks quite a few times, but now, at its Unpacked 2020 event, Samsung has finally made it official. The clamshell form factor along with a foldable display is something that Motorola has already done with the new Moto Razr, but the Galaxy Z Flip is a different beast. Sure, one reason for that is Samsung’s offering packs flagship-level specs, unlike the Moto, but there’s more too. Worth mentioning is the fact the Z Flip’s display is made of foldable glass, which is an industry first, as per Samsung. 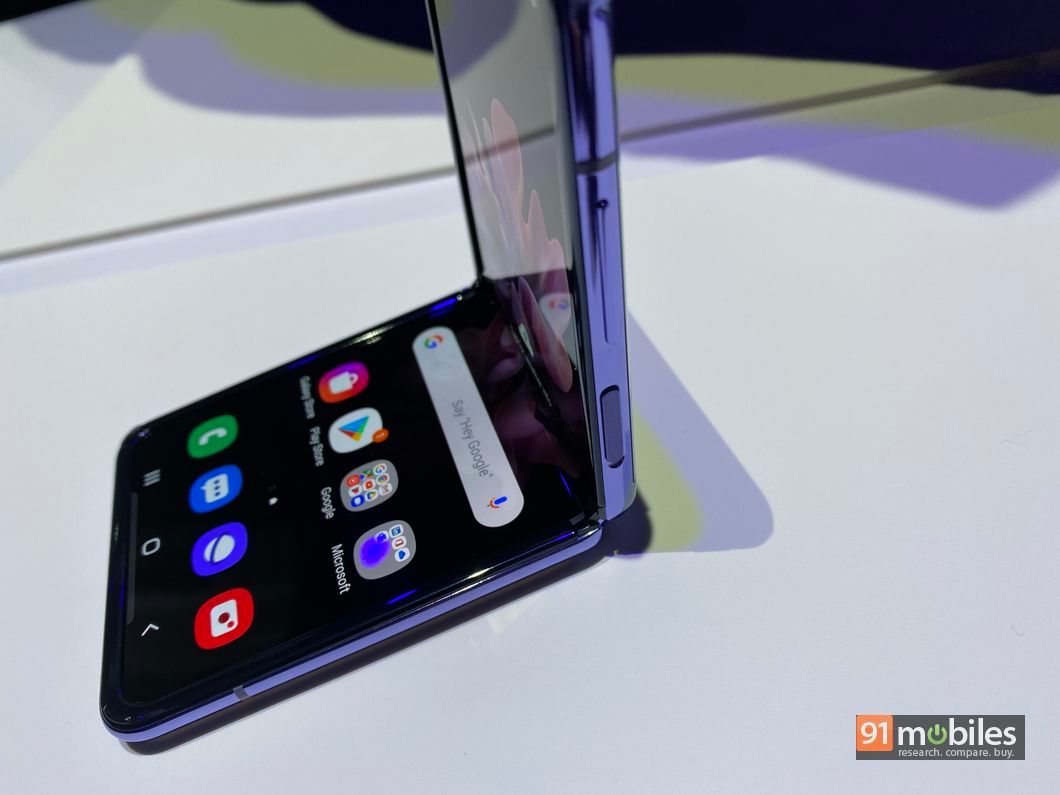 The first-gen Galaxy Fold had a few design flaws and build quality issues that were rectified later, but I’m sure Samsung would have taken extreme care to make sure it doesn’t need to go down the same road again. As such, the build quality of the Z Flip feels good. The ‘Hideaway Hinge”, as Samsung calls the hinge on the Z Flip, feels solid. It still remains to be seen whether the device can withstand the rigours of time and daily usage though, and possibly a few drops. A word of caution here: this is a pricey device, so if you plan on getting one, make sure you handle it with kid gloves. 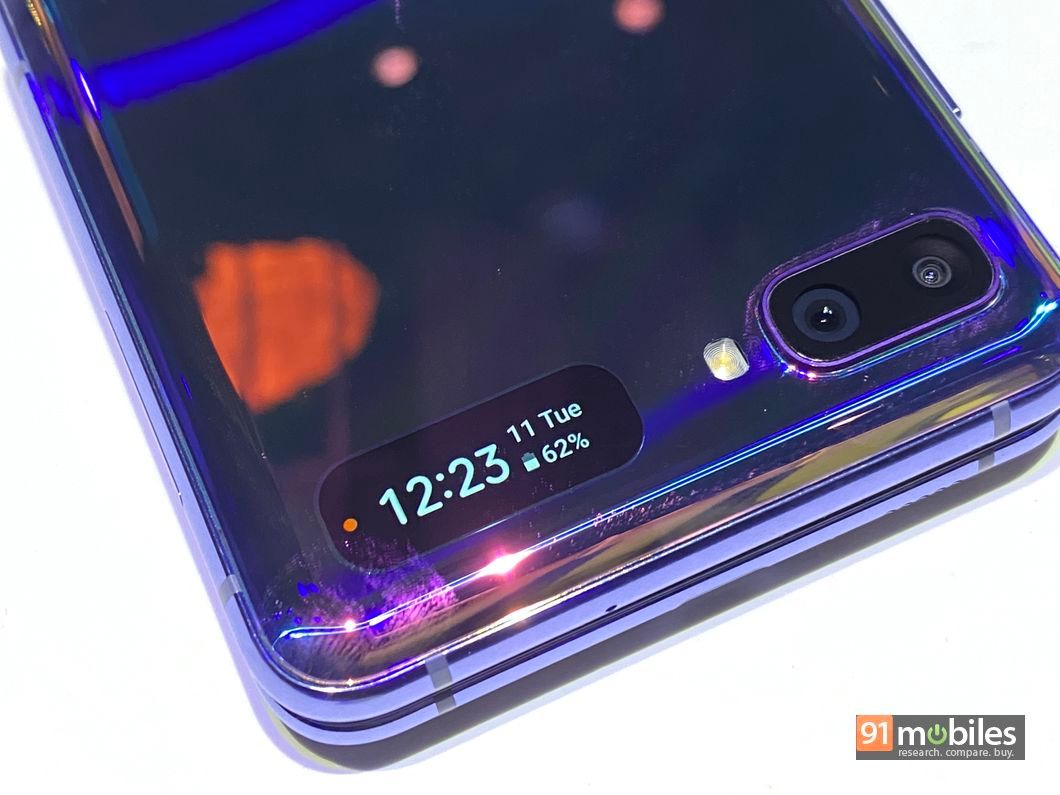 The Z Flips bears a wide body when folded, which is thick yet compact. You can slide it into your pocket or bag easily. On top is a tiny secondary display called Cover Glass, measuring 1.1 inches, that shows time, date, battery level etc, along with notifications etc. It can even be used a viewfinder for capturing selfies. Accompanying the secondary display is a camera module holding a pair of 12MP shooters, a primary one and a 123-degree ultra-wide. There’s no telephoto here. 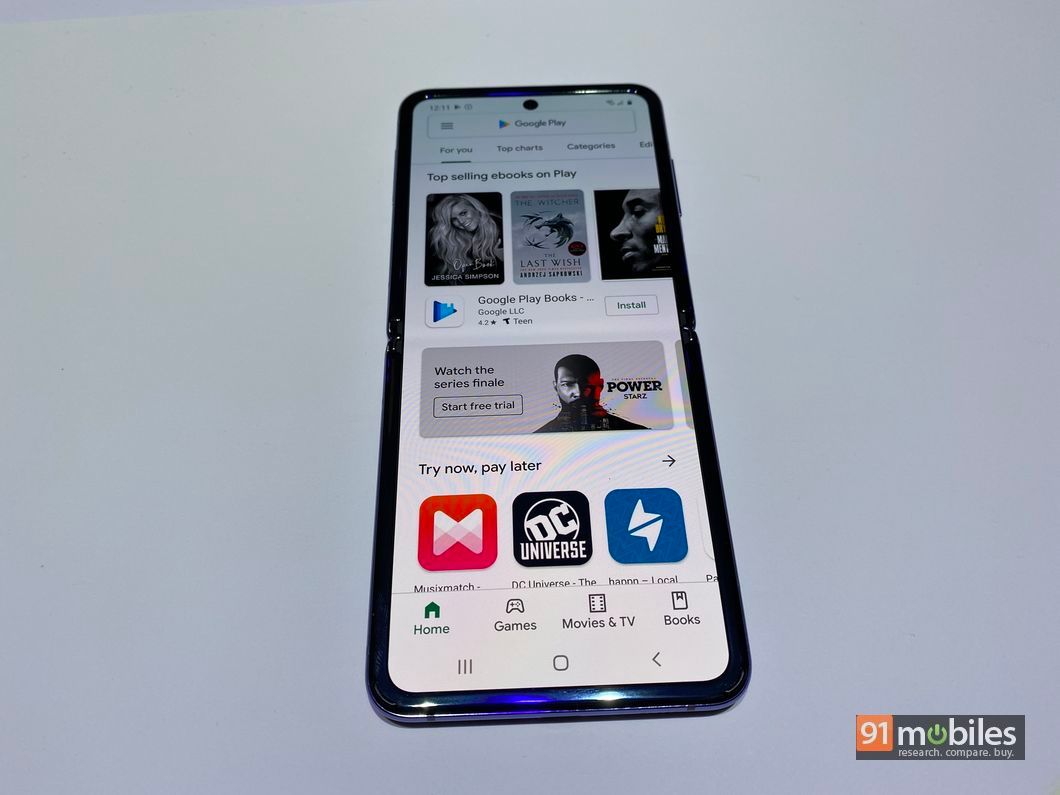 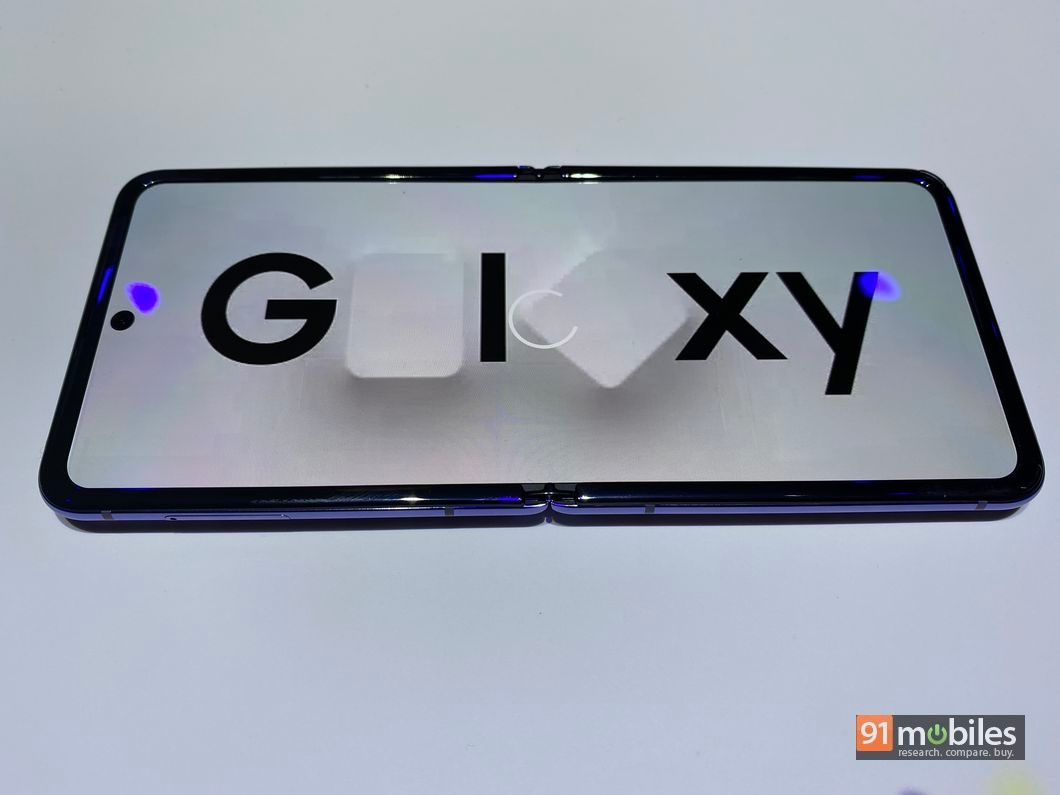 The screen itself seems bright and punchy, so no complaints there. On the right side, you’ll see a volume rocker, and a power button that integrates a fingerprint scanner. Samsung has provided a face unlock option too. At the bottom, there’s a Type-C port, the speaker, and a SIM tray that accepts a single nano SIM.

As far as core specs are concerned, the Galaxy Z Flip is powered by Qualcomm’s Snapdragon 855+ chipset, mated to 8 gigs of RAM and 256GB storage that can’t be expanded. The chipset isn’t the very latest Qualcomm has to offer, but the Snapdragon 865 SoC was announced just recently (in December 2019), and Samsung seems to have been working on the Z Flip for a while now. A not-so-exciting 3,300mAh battery provides the juice, and supports 15W fast charging. The Z Flip also supports wireless charging, and offers the Wireless PowerShare feature too (Samsung’s name for reverse wireless charging). 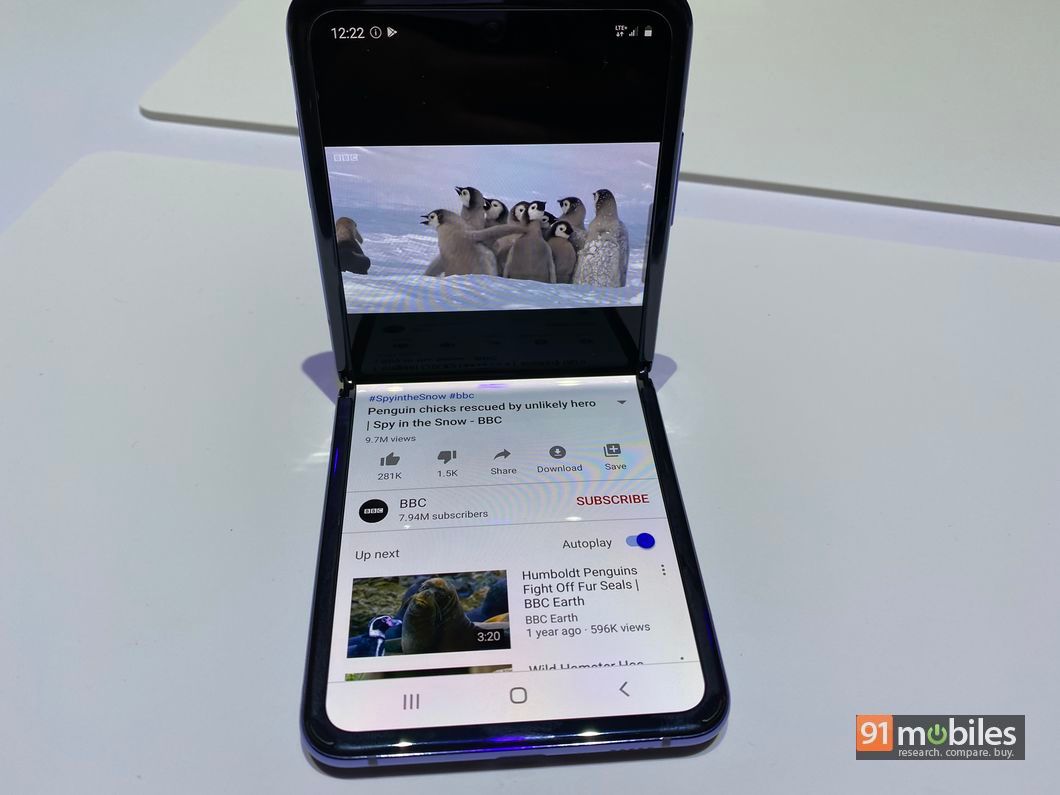 Software-wise, there’s Android 10 layered up with Samsung’s OneUI. Samsung has added some nifty features on the software side. The Flex mode for instance, splits the display into two 4-inch screens when the device is placed in free-standing mode (with the flip open halfway) on a flat surface. This allows you to play content on the top screen and control it via the bottom half. You can even run two apps simultaneously. Since the Galaxy Z Flip can stay open at multiple angles, you don’t need to use a tripod with it, and can place it anywhere you like to capture handsfree selfies, time-lapse videos and more. 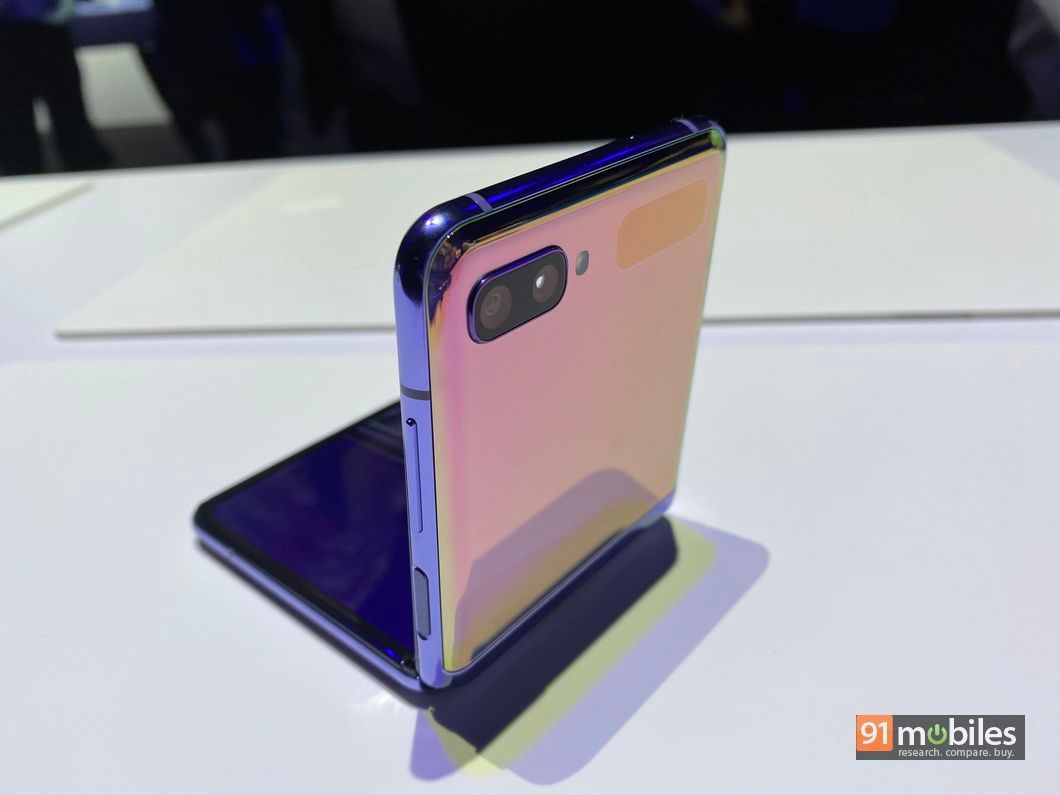 In a nutshell, the Galaxy Z Flip is an exciting device that makes for a solid addition in Samsung’s portfolio, and joins the elite foldable brigade. I’m quite sure it’s going to find many takers, just like the Galaxy Fold did, and I can’t wait to take it out for a proper spin.