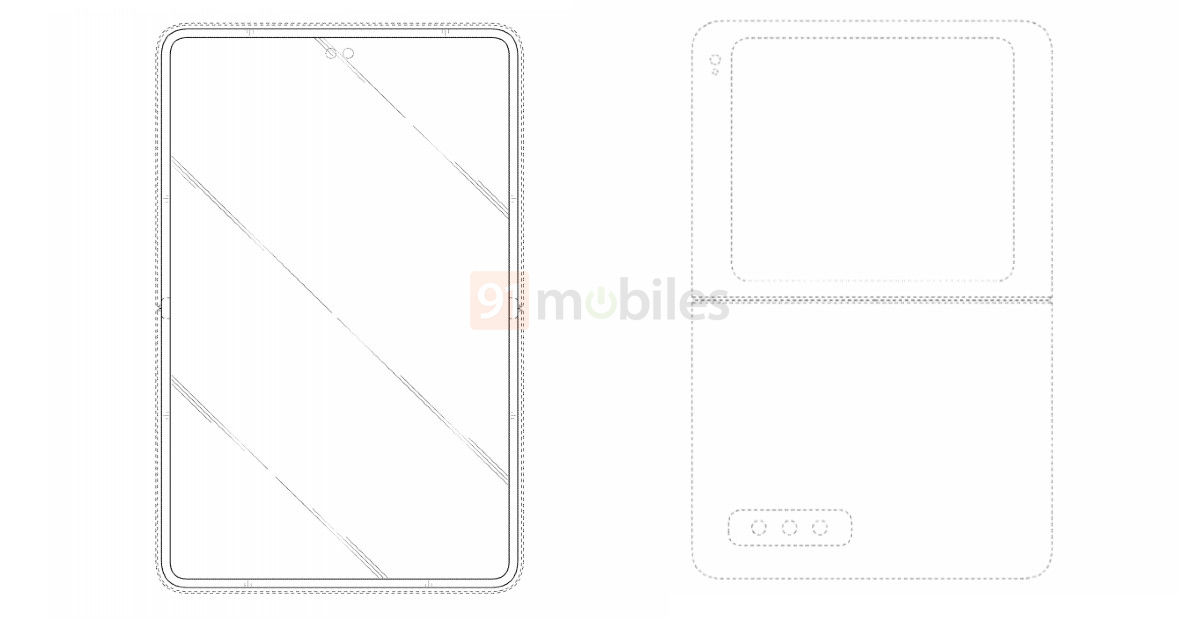 Samsung could be working on a flip phone with a large cover display and dual punch-hole selfie cameras, according to the patent discovered by 91mobiles. The patent was filed at the United States Patent and Trademark Office (USPTO) back in August 2019 and was only published recently. The outer design of the flip phone is similar to the Samsung Galaxy Z Flip but with some new additions, such as a large cover display. The inner foldable screen is seen with dual punch-hole cameras and slim bezels.

Like the Galaxy Z Flip, the phone folds in the middle and the outer panel has a sizeable secondary screen that may surface notifications, time, date, and should even allow interacting with apps and UI. The rear panel has triple cameras arranged horizontally. It has two tiny cutouts beside the outer display, which probably could be microphones or LED flash? it isn’t exactly clear at the moment. The fold in the middle should leave a noticeable crease and the flip phone, on the whole, seems slightly wider than the current Samsung Galaxy Z Flip, which can be seen as an upgrade.

Unfortunately, the patent document doesn’t reveal the hardware specifications of the foldable flip phone at the moment but considering it’s still in the patent stage, we’ll never know whether Samsung will ever launch such a design. On the flip side, it’s also possible that Samsung may implement the design changes to its future Galaxy Z Flip phones. Notably, Samsung is gearing to unveil the Galaxy Z Flip 3 at the Galaxy Unpacked event on August 11th alongside the Galaxy Z Fold 3.

The upcoming Galaxy Z Flip 3 is said to come with a 1.9-inch cover display, which is bigger than the one seen on the original Galaxy Flip. Seeing this trend, we may see the patent come to life in the next couple of years.