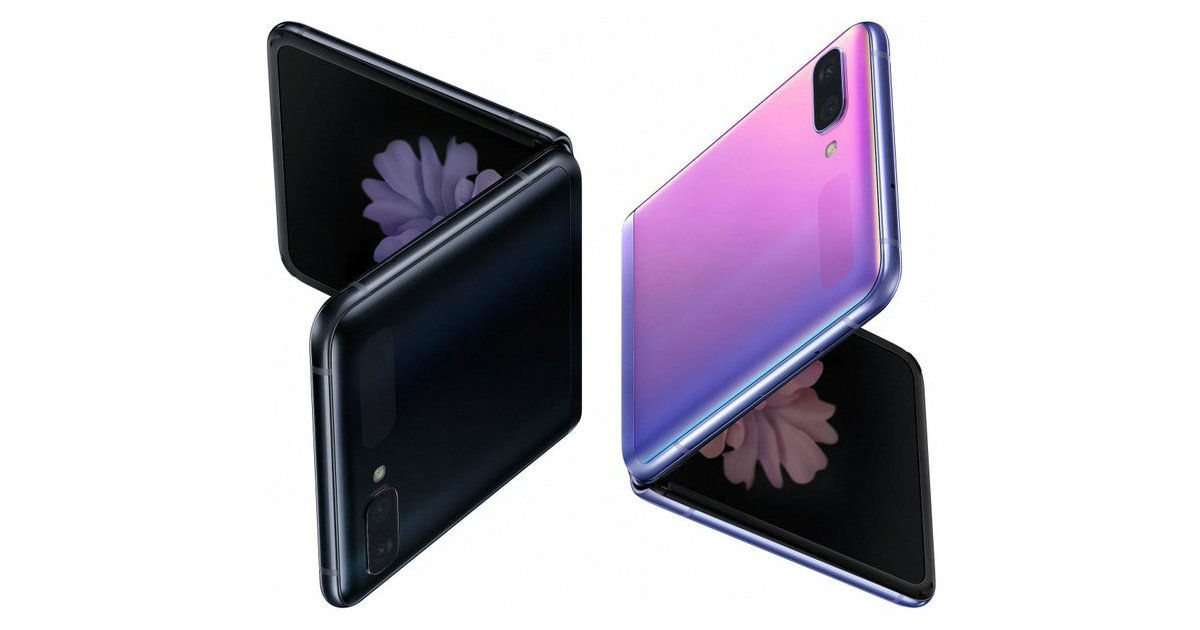 Samsung is getting closer to launching its next generation foldable smartphone, so far referred to in rumours as the Samsung Galaxy Z Flip. This week noted tipster Evan Blass and WinFuture’s Roland Quandt posted official-looking renders of the Samsung Galaxy Z Flip, showing its clamshell design design in all its glory. These clear renders show off the upcoming foldable phone from all angles, folded, unfolded and partially folded. Furthermore, it also shows the phone in an attractive purple colour finish.

The Samsung Galaxy Z Flip is expected to be launched alongside the upcoming flagship Samsung Galaxy S20 series on February 11th. Going by renders released on the internet so far, the Samsung Galaxy Z Flip is expected to house a horizontal spine along the centre of the device, that flips the phone down in half when folded. The form factor will be similar to the recently unveiled Moto Razr foldable smartphone, which made the headlines thanks to bringing about the return of an iconic smartphone form factor. According to reports, the Galaxy Z Flip will sport a 6.7-inch Infinity Flex AMOLED display on the inside, with 22:9 aspect ratio and HDR10+ support. Outside, it will feature a secondary AMOLED display that will be just 1.06 inches in size.

The exterior of the display is further expected to feature Corning Gorilla Glass 6 to add strength to the body of the phone. There will be a small 1-inch secondary display on the cover right next to the dual camera setup that will display notifications and the time. The side of the frame will see a fingerprint sensor. The bottom edge of the phone is expected to feature the USB-C port and the speaker grille. In terms of reinforcements, Samsung is expected to include a stronger hinge mechanism, as well as a thin layer of glass for added durability. It is also expected to house raised bezels around the primary display, which will further help protect the display from cracking when the device is folded hastily. After facing plenty of backlash due to issues with the durability of the Samsung Galaxy Fold, it will be important for Samsung to get the durability of its second foldable phone attempt, the Galaxy Z Flip, on point.

In terms of general specifications, the Samsung Galaxy Z Flip is expected to run on the Qualcomm Snapdragon 855 Plus SoC, along with up to 8GB of RAM and 256GB native internal storage. It is not expected to come with an external storage slot. As far as cameras are concerned, the Samsung Galaxy Z Flip will feature a dual-rear camera with 12-megapixel primary and 12-megapixel ultra-wide sensors. For the front camera, the main display is expected to host an in-display unit with a 10-megapixel front camera sensor. The device is expected to house a two-part battery with 3,300mAh total capacity and support for 15W fast charging, as well as 9W wireless charging.

The device is expected to be unveiled at the Galaxy Unpacked event scheduled for February 11, while reports suggest that the Galaxy Z Flip may be available for purchase as early as February 14, in Europe. So far, rumours have pegged the price of the device at around €1,500 (~Rs 1,18,000). There have been no word regarding availability of the smartphone in India, but given that the Moto Razr is expected to launch soon, and the first generation Fold was launched as well, it is possible that the Samsung Galaxy Z Flip will also be launched in India too.