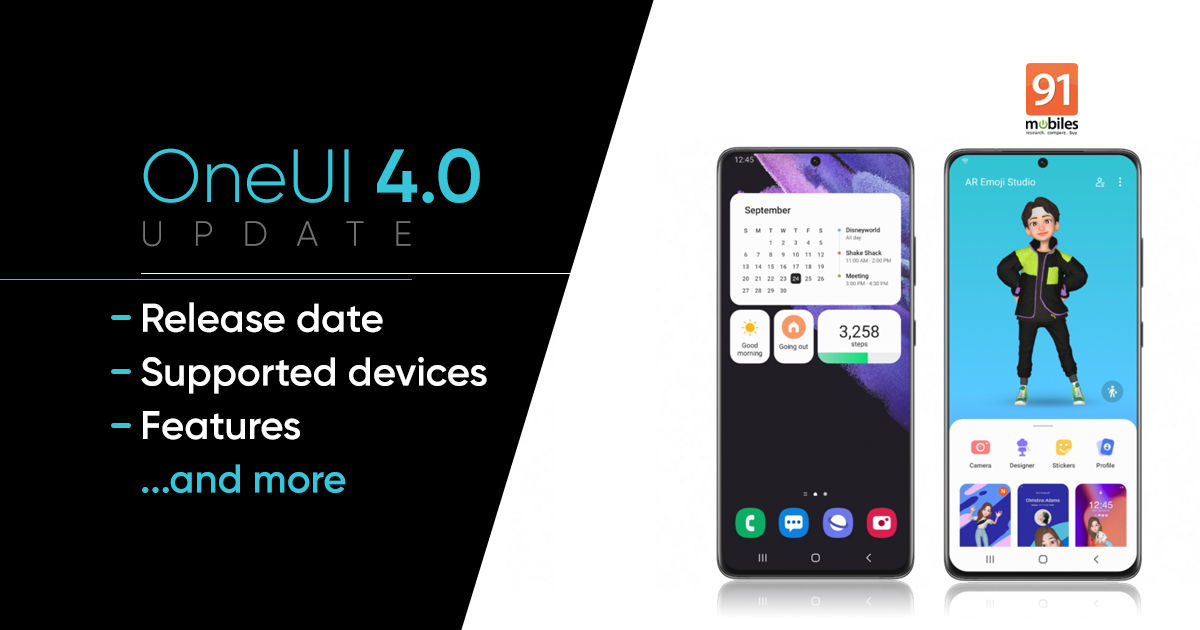 Ever since Google announced Android 12, Samsung hasn’t kept quiet. Since mid-September, Samsung has been testing the One UI 4 on the Samsung Galaxy S21 series and it’s available in a public beta. And with its latest release, It is much more polished and on track for its final stable release. This update has many of the features included in the AOSP Android 12. In this post, we will go through the main One UI 4 features introduced in this build, the release date in India, steps to try it out early, and the update roadmap.

Samsung officially unveiled this new build on October 20th at the global Unpacked Part 2 launch event. Right now, a majority of the Samsung smartphones are running the One UI 3.1 build, and a majority of them are slated to get the new One UI 4 in the coming months. The One UI 4 build is based on Android 12, and the first beta was released on 13th September.

While the One UI 4 update might not seem as massive at first, it sure does bring some big changes to the Android skin. Samsung has tried its best to keep its UI similar to the older One UI while incorporating as many Android 12 features as possible. Let’s dive into some of OneUI 4 core features. 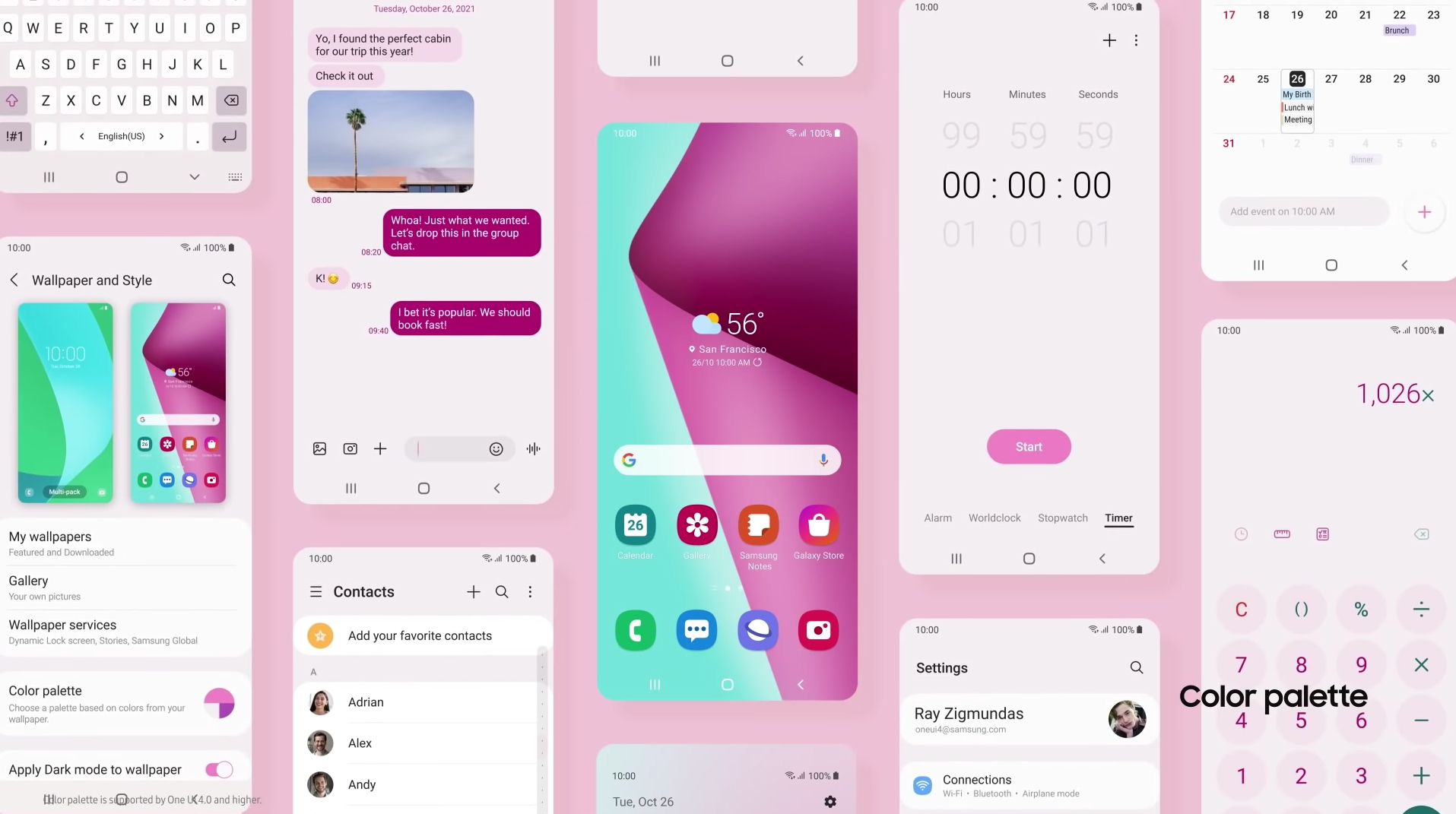 The new One UI 4 update has brought some visual changes across the UI. There is now a Wallpaper Theming system that was introduced in Android 12, where the system will dynamically change colours according to the wallpaper you have applied. The wallpaper theming will be applied across the entire system be it the Settings app, or stock Samsung dialer and messages app. It makes your phone more colourful, to say the least. 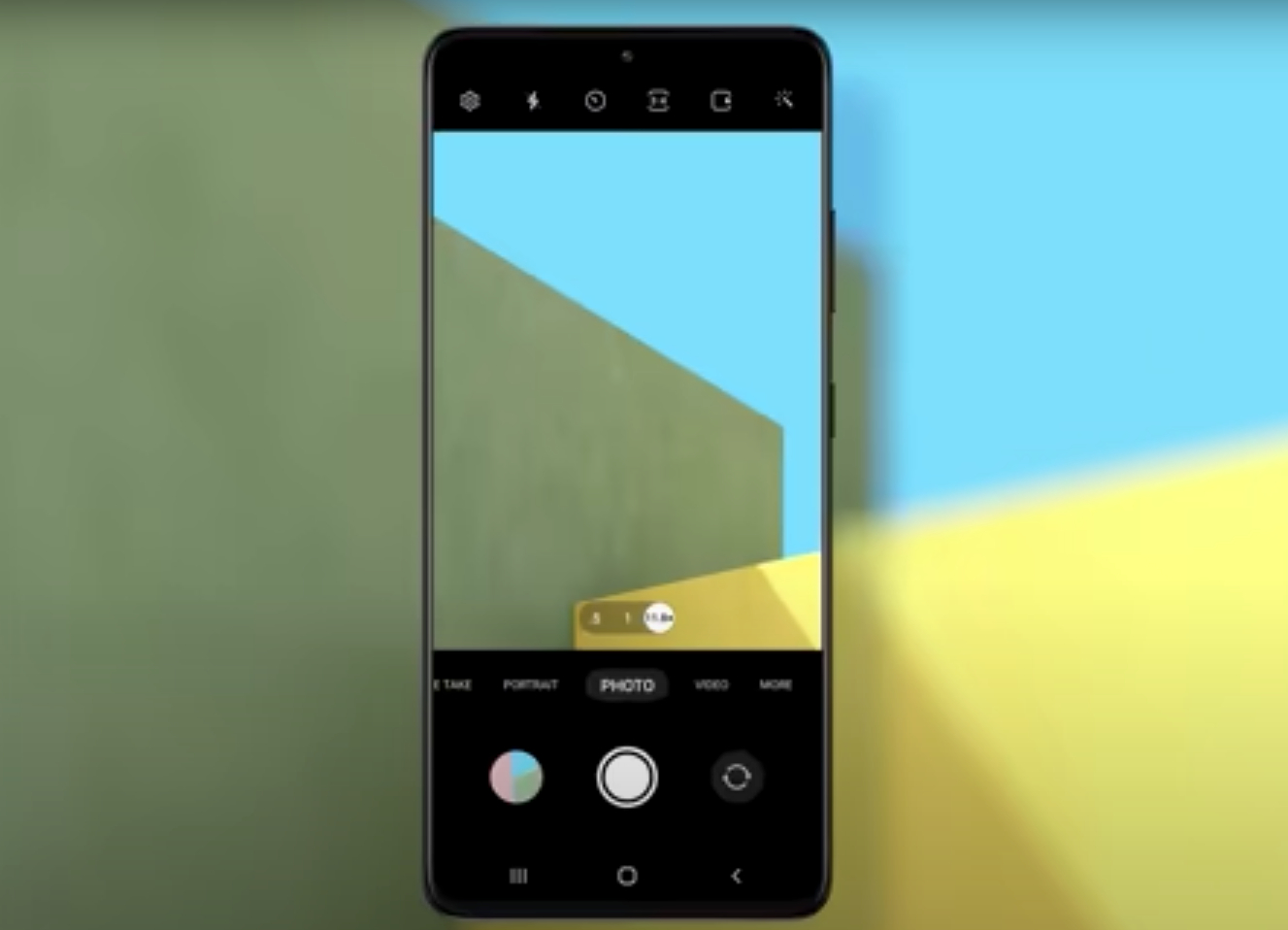 The camera app also has received some changes. The annoying trees that depict the zoom level are gone and are replaced with the proper zoom levels, be it 0.6x or 100x. It also shows properly at which zoom level you are on. In addition, the Pro mode has a new level indicator which is enabled when you toggle on the grid lines. There is now an option to scan a QR code within the camera app and you can either copy the URL or directly open it into the browser. 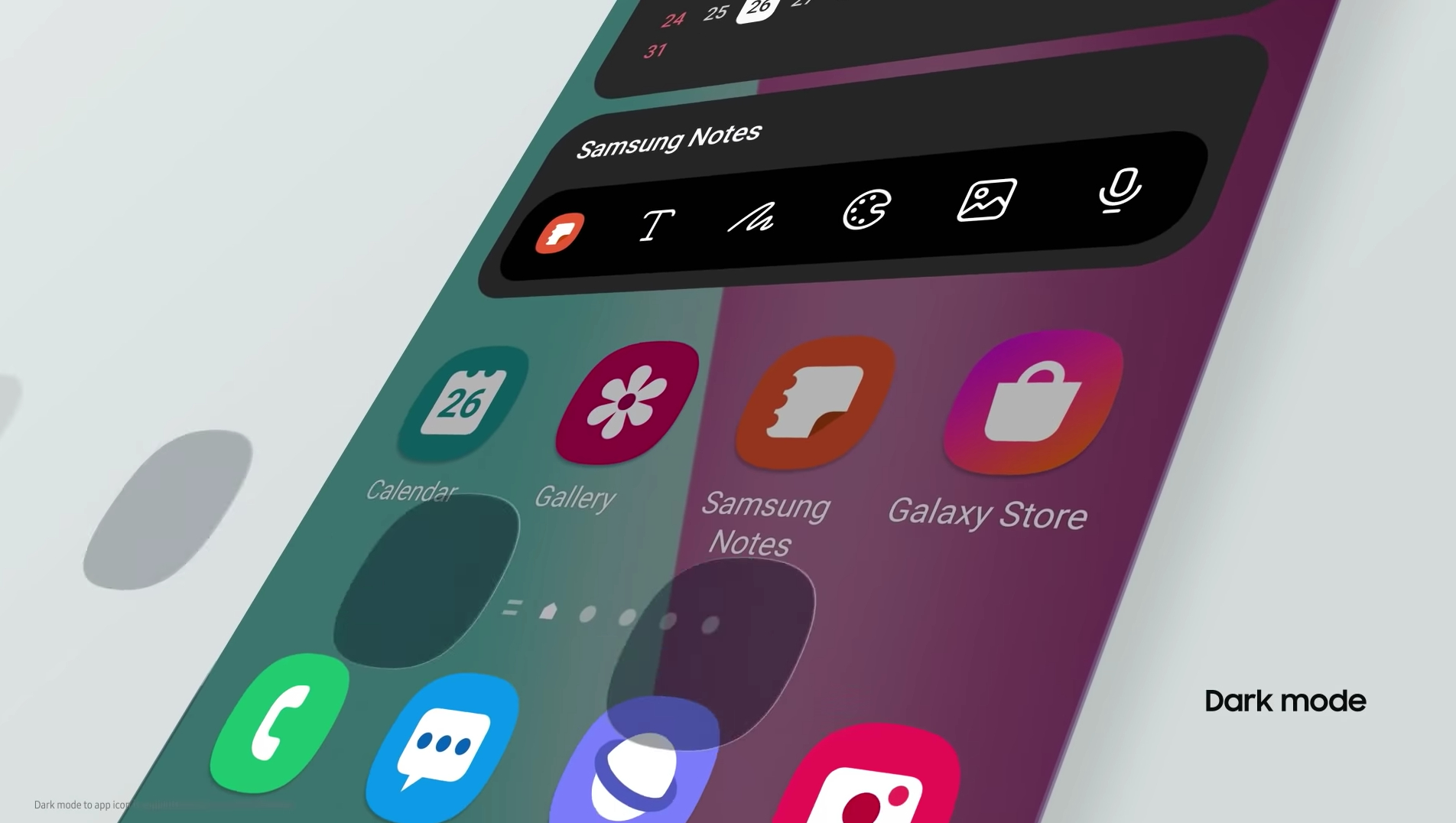 The device care has been refreshed with an emoji that tells you the score for your device status. You can also check software updates and diagnostics right from device care now. Apart from this, the protect battery function, which is usually seen in Samsung tablets has made its way to the S21 series; however, we’re not sure whether it will apply to every Samsung phone receiving the One UI 4 update. 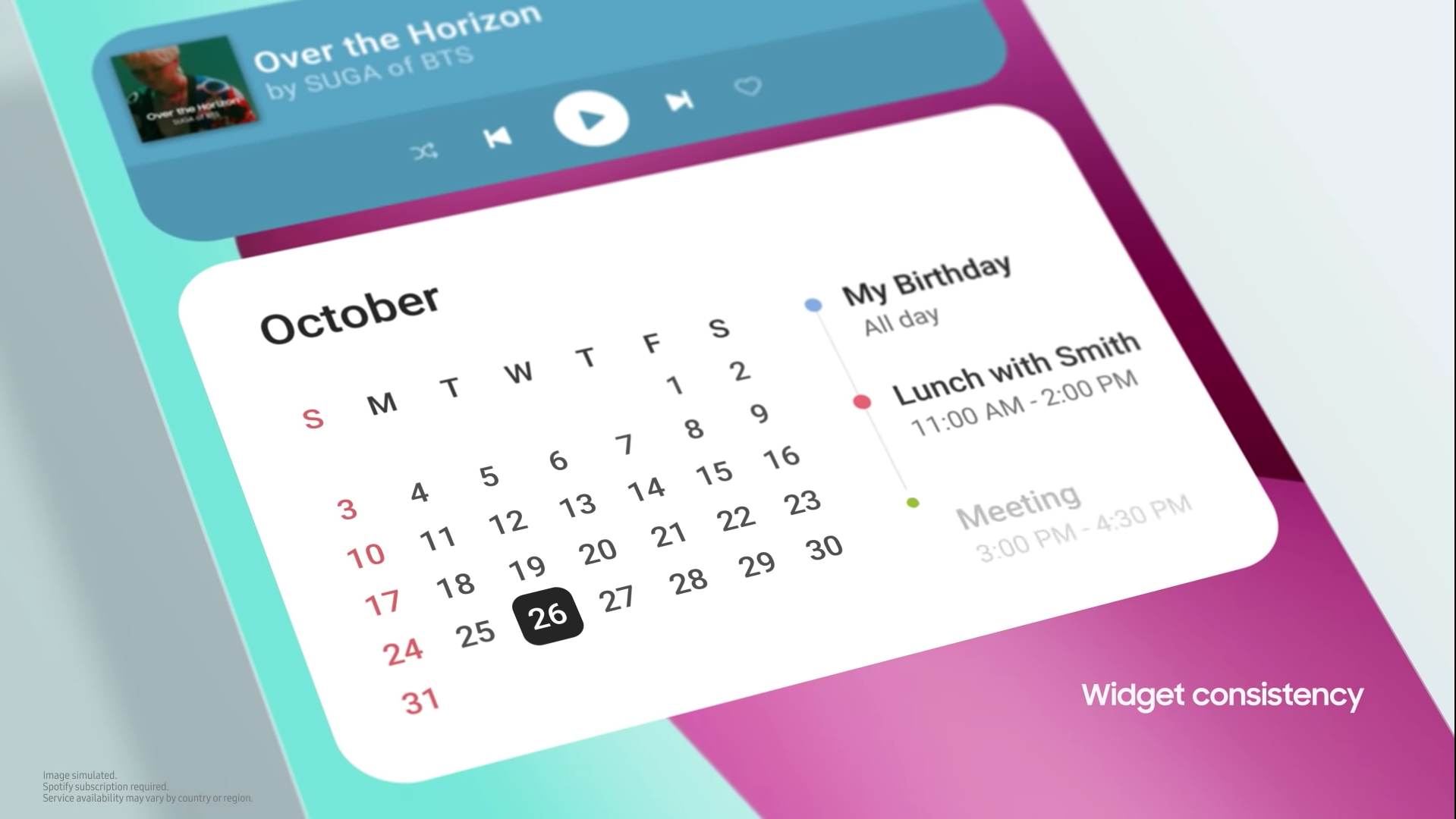 In the Calendar app, there is a bar at the bottom that lets you quickly add events without tapping the date. The weather app also has a fresh UI, and it changes dynamically as you scroll down. Additionally, the Samsung keyboard now has Grammarly indication built-in so that you can avoid typing incorrect sentences. Also, on the keyboard, the emojis, stickers and GIFs are now all under one animated app icon, so you can get easy access.

Unsurprisingly, the RAM Plus feature, which is similar to the virtual RAM feature on OPPO, Xiaomi, and Vivo, has also made its way in One UI 4. The feature uses your internal storage to dynamically expand your RAM up to 4GB. It is yet to be seen if all the devices will get this feature in One UI 4.

In addition to the core features, the One UI 4 also comes with a host of Android 12 features. There is a new permission history under the privacy settings where you can see app usage permissions over the last 24 hours. You can go back as long as 7 days for sensitive permissions including camera, location and microphone. The One UI 4 also features Android 12 privacy indicators. So, if an app tries to access your camera or microphone, you will immediately see an indicator in the top right corner of the screen. 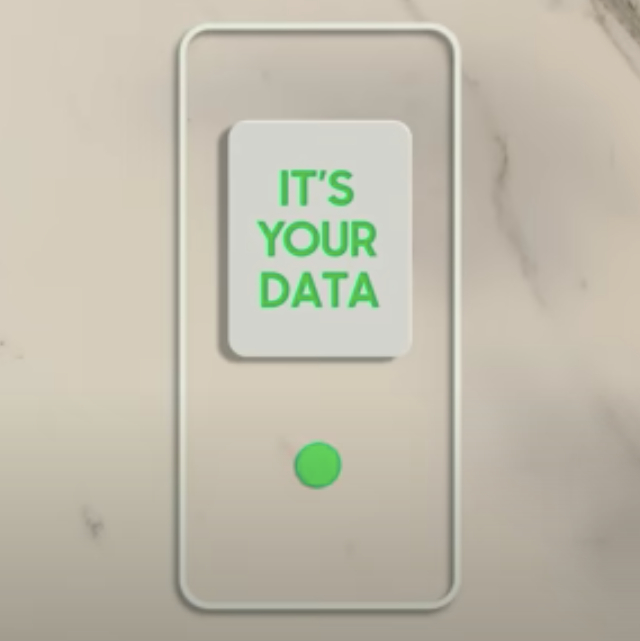 Under privacy settings, there are toggle buttons for camera and microphone access. Once disabled, all apps with access to the camera or microphone will have their permit revoked. The same toggles are available in quick settings as well. In addition, now there is an option to give an approximate location to apps instead of your precise location. The toggle is available with location permission for each app.

Another nifty feature Samsung has brought is “Extra Dim.” As the name suggests, you can dim the screen beyond the minimum screen brightness. It is handy for all those night owls who like to read at night. One UI also has gotten better in overall fluidity and performance. The shutter delay on the camera app is gone now.

Samsung has improved its update cycle tremendously since the last few years, and with the announcement of up to 3 years of OS updates meaning most of the devices released from 2018 would also get the One UI Update. Here is the timeline of eligible devices and the month when it will get the update. We will update the article as soon as other devices are added.

How to apply for One UI 4 beta update

In order to install the beta, it is very simple. All you have to do is go to the Samsung Members App, and you will see a notice for the One UI program, tap on it and a detailed post will be available from Samsung. Read it, and after that, once you click join now, you will get another pop-up with disclaimers, tap Enroll Now and roughly after 10 minutes, check for software updates, you should get the update.

Do note this is available ONLY on the Galaxy S21 series and is available in select regions only as of now, that is China, India, Germany, Poland, South Korea, the UK, and the US. To be on the safer side, it is always recommended to begin this beta update procedure following a complete.

Android 12-based One UI 4.0 update roadmap for India (November 17th)

The roadmap of OneUI 4.0 update for India has officially been revealed. The update will start rolling out to compatible devices from December. The Galaxy S21 series, Galaxy Z Flip 3, and Z Fold 3 will be the first to get the Android 12 update in the country.

Samsung has introduced the fourth beta update of its newly-launched custom Android skin for Samsung Galaxy S21 smartphones. This means the stable rollout of the version is just around the corner.

Samsung has started rolling One UI 4.0 beta update to the Samsung Galaxy Z Flip3 and Z Fold3 smartphones along with Samsung Galaxy S21 series. Customers who want to participate in the beta program can sign up through the Samsung Members app.