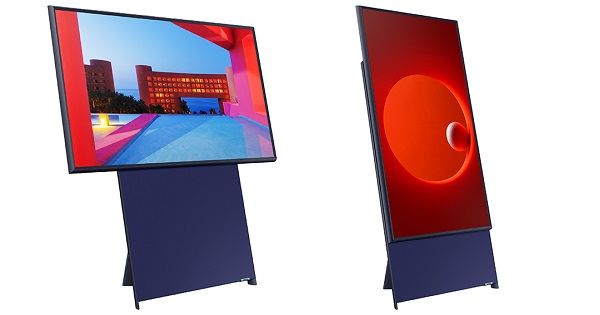 Samsung has announced a new smart TV called The Sero in its home market South Korea. The TV can adapt to the orientation depending upon how it’s placed – vertically or horizontally. The vertical orientation has been added to The Sero for smartphone-oriented millennials. Samsung claims that the vertical design is suitable for displaying content from smartphones, which otherwise would come with broad black strips on each side. “This is based on the fact that most of the mobile contents are in the vertical form,” the company added in a press release.

The Sero can also be used as a standard TV can be rotated horizontally to provide a viewing experience similar to that of a conventional TV. Coming to the specifications, the Sero smart TV comes with a 43-inch display that bears QLED resolution and thin borders. The unit also has a built-in 6W 4.1 channel speaker, Samsung’s AI Bixby assistant, and screen mirroring based on NFC Games, videos, and so on.

“Samsung will continue introducing screens that respect personal consumer tastes. We will think outside the box to bring different types of screens and different user experiences,” said Han Jong-hee President of Visual Display Business at Samsung.

The Sero has been priced at KRW 1.89 million that roughly translates to Rs 11,37,127 in the Indian currency. The smart TV will be available for sale in South Korea by the end of May.